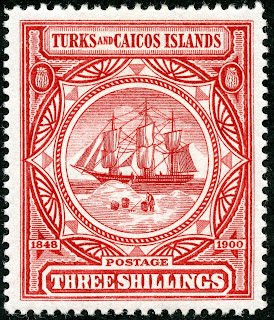 1900 Scott 9 3sh brown lake
"Dependency's Badge"
Quick History
Turks & Caicos Islands are a group of West Indies islands at the southern end of the Bahamas. But they were separated politically from the Bahamas in 1848, a celebratory date that is well noted on their 1900-08 stamps.

But the celebration of independence should be muted at best, as, in reality, they were under the supervision of Jamaica. In fact, the islands were formally annexed to the Jamaica colony in 1873, and they remained a dependency of Jamaica until 1959. 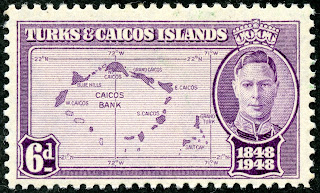 1948 Scott 97 6p violet  "Map of the Islands"
Centenary of Political Separation from the Bahamas
I have already covered "Quick History" of the islands with the "Turks Islands" blog post, so I will say little more here.

The islands were named after the Turk's cap (head) cactus, and the Lucayo (Bahamian) subdialect "cayo hico" term, which means "string of islands". 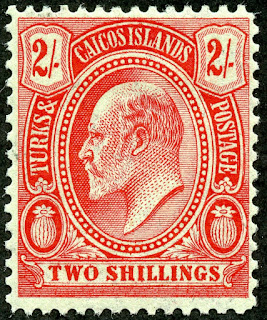 1909 Scott 21 2sh red/green "Edward VII"
Into the Deep Blue
The 2014 Scott Classic Specialized 1840-1940 catalogue has, for Turks & Caicos Islands 1900-1950, 130 major descriptive numbers. Of those, 75 are CV <$1-$1+, or 58%. As a British sphere colony, Turks & Caicos Islands stamps are moderately expensive at times, but the WW collector should be able to form a representative collection without much difficulty.

The 1867-1894 earlier stamps for the islands are found under "Turks Islands" in the Scott catalogue, and my just previous "Turks Islands" post reviewed that philatelic era.

One happy circumstance is I happen to have a virtually complete collection in unused condition of Turks & Caicos Islands, so the stamp examples I show off here, contrary to the usual inexpensive variety, will be, at times, of more robust CV. Enjoy! 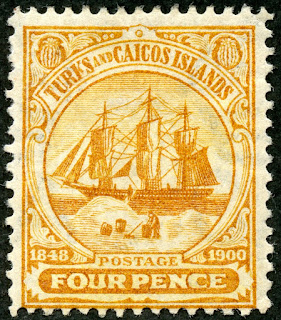 1900 Scott 5 4p orange "Dependency's Badge"
Design A6, Wmk 2
The first issue that is labeled "Turks and Caicos Islands" proper (prior, stamps issued were under "Turks Islands") is the engraved 1900-04 issue of nine stamps. The lower denomination Wmk 2 seven stamps are in "normal" size A6 format, and the 4p orange is shown here.

CV is <$1-$4+ for the lower denomination seven stamps.

Note the proud "1848"  date, which indicates when T & C was politically separated from the Bahamas. (In fact, they were under Jamaica's sphere, formally since 1873. They were never actually "independent".)

Note the hills of salt on the shoreline?

Salt harvesting and raking, because of the shallow waters around the islands, was a prominent activity throughout the 19th century. The salt collectors would come from Bermuda, and generally would stay for six months, then return to Bermuda. This established the islands under British dominance, which began in 1681. 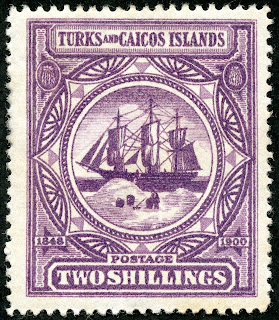 1900 Scott 8 2sh violet, A7 design
"Dependency's Badge"
The two higher denominations for the 1900-04 issue is in an engraved Wmk 1 A7 larger format, with the pictorial vignette the same, but the frame altered. 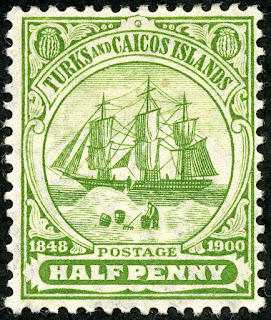 (If one needs a refresher on British colonial watermarks, check the Gibraltar or other British colony posts.) 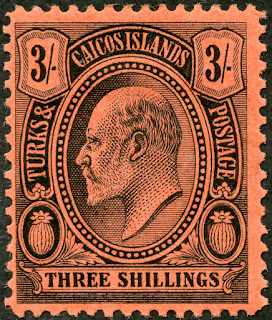 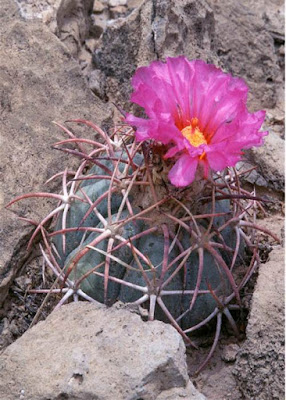 Turks-Head
I believe that is a Turks-Head Cactus, but flowering, as in the oval lower side panels on the Edward VII issue. 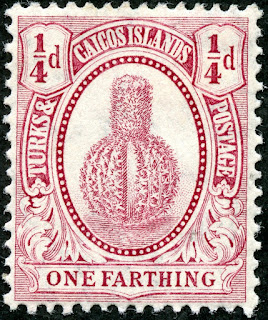 (Obviously, One Farthing must be 1/4 pence.) 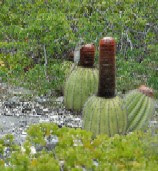 Turks-Head Cactus (Melocactus Intortus)
The cactus is widespread on the islands. The name comes from the spiny red cap, which is thought to resemble a fez (cylindrical red hat). 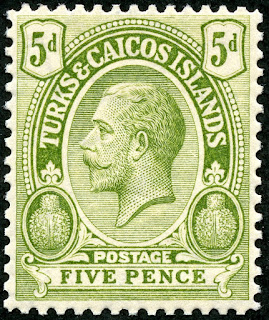 1916 Scott 31 5p olive green "George V"
Wmk 3
The Turks-Head Cactus motif continues on the lower oval side panels for all of the George V issues.

The  engraved 1913-16 eleven stamp issue, with Wmk 3, has upper shield shaped corner panels for the denomination with a background in white. (This will change, beginning with the 1922 issues.) 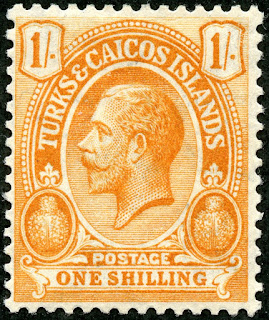 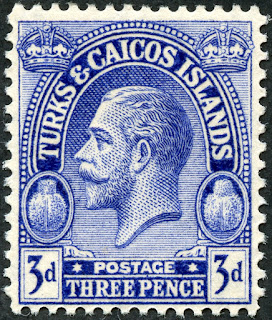 1922 Scott 50 3p ultramarine "George V"
Inscribed "Postage"
The 1922 -26 fourteen stamp issue (Wmk 4 for the twelve lower denominations, Wmk 3 for the two highest denominations) moves the corner denomination panels to the bottom, and places a "crown" on either side of the upper stamp. 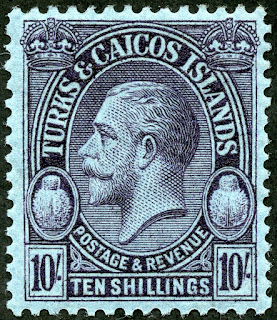 But the Ten Shillings denomination illustrated here is CV $60+.  ! 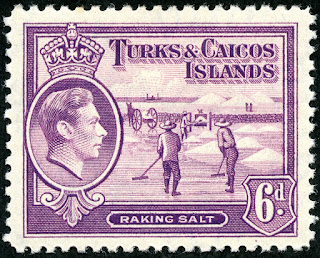 "Raking Salt" is shown on the eleven lower denominations.

"Salt Industry" is pictured on the three highest denominations (fronting the "Out of the Blue" section).

If one is interested in parsing the George VI 1938-45 issues further, there is a nice internet resource by KGVI Stamps. 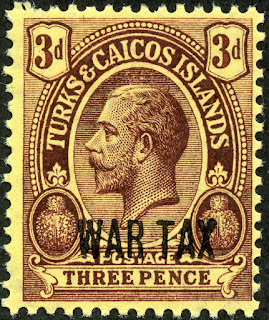 MR1 (1p carmine) and MR2 (3p violet/yellow) consisted of a "war tax" overprint, as shown here, on the bottom of the stamp. 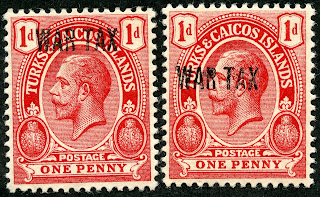 1917 Scott MR3 1p carmine
Regular Issue of 1913 Overprinted
Black Overprint at Top or Middle of Stamp
MR3 (1p carmine) and MR4 (3p violet/yellow) have the same overprint as MR1/MR2, but on the top or middle of the stamp. 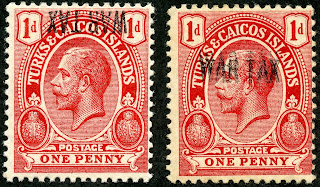 1917 Scott MR3a Inverted Overprint
1917 Scott MR3b Double Overprint
There are minor numbers in the Scott catalogue for "Inverted overprint" and "Double overprint", here shown with the MR3 stamp. They catalogue in the $50+-$60+ range. (I have certs from the "B.P.A. Expertising Limited London-England Expert Committee" stating that these are genuine. ;-) 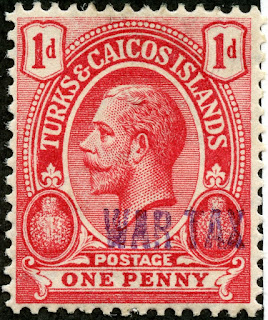 1919 Scott MR5 1p carmine
Same Overprint in Violet
The MR5 (1p carmine) is recognized by a violet overprint, while the MR6 (3p violet/yellow) has a red overprint.

Note that heretofore, all of the overprints style-wise are the same. 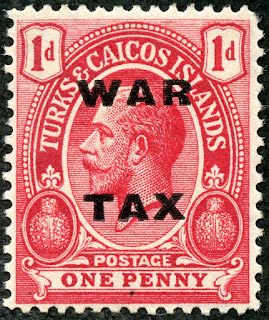 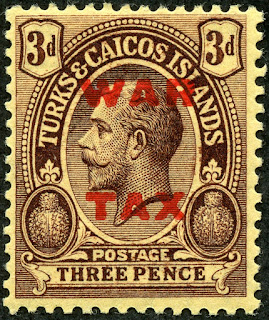 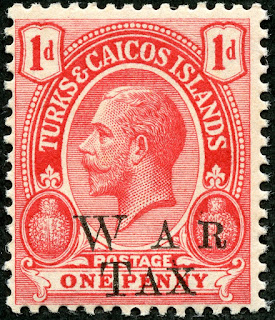 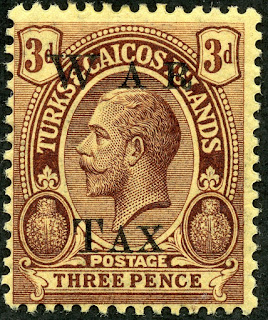 If one has a number of the wide apart tall MR12 and MR13 stamps, one may want to measure carefully (in mm) the separation between "War" and "Tax". Apparently, the bottom two rows of the setting will show the words "War" and "Tax" 1mm farther apart. 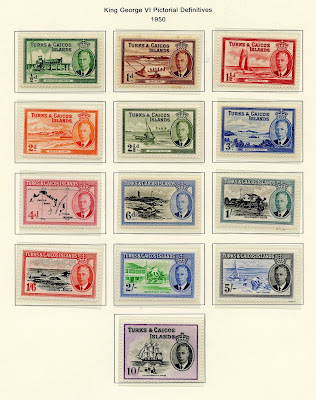 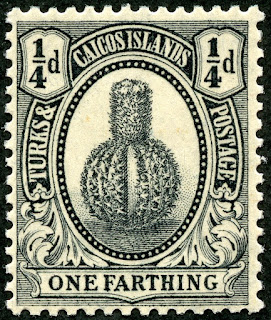 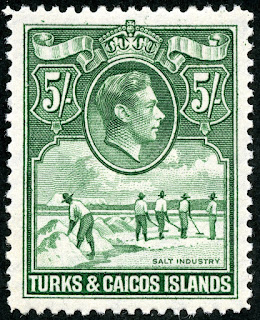 1938 Scott 88 5sh green "Salt Industry"
Out of the Blue
I never intended to have a complete collection of classical-era Turks & Caicos Islands when I began the WW quest.  Heck, I doubt I even knew about Turks & Caicos Islands. ;-) Serendipity, chance, luck, and openness to possibilities lures the collector down alleys and byways. The journey is truly the reward with WW collecting!

Note: Cactus pics appear to be in the public domain.