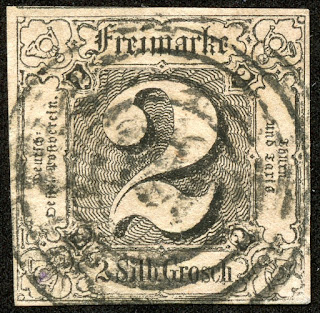 Northern District 1852 Scott 6 2sgr black/rose
Quick History
The Thurn and Taxis Princely House (Tassis) has had a long history of providing mail and newspaper courier distribution services- originally since 1290 for Italian city-states, and then spreading by the 16th century to a postal route network encompassing Germany, Austria, Italy, Hungary, Spain, and the Low countries (now Netherlands, Belgium, and Luxembourg). They were named the Imperial Postmasters General for the Holy Roman Empire in 1748. 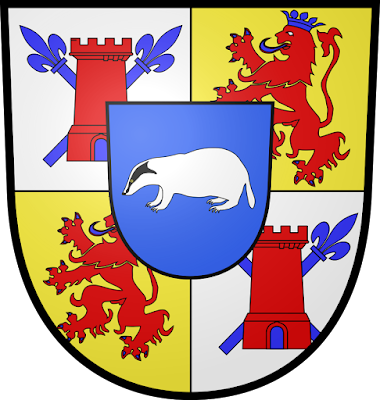 Thurn und Taxis Coat of Arms
The Thurn and Taxis private Post was active between 1806 and 1867.

Originally headquartered in Regensburg, it was moved to Frankfurt am Main in 1810. 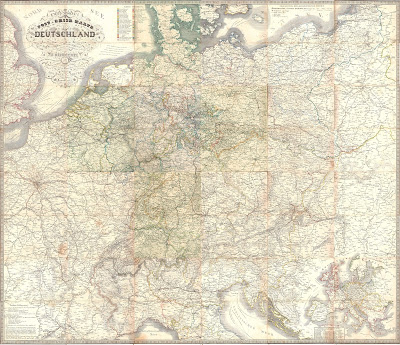 There is a fine German States and Postal Service map developed and published by Stamp World History that shows the German State postal service areas covered by Thurn and Taxis until 1867. Thanks Gerben!

In 1867, after the Austro-Prussian war, Prussia took over the postal system on July 1, 1867. (Prussia paid three million thalers ($2,250,000) for the postal rights from the Prince of Thurn and Taxis.) This, in turn, was followed by stamps from the North German Postal District on January, 1, 1868, and finally the stamps of the German Empire on January 1, 1872.

By the way, the House of Thurn and Taxis is still very much alive and well. 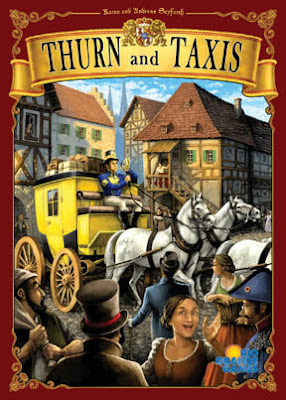 Turn and Taxis Board Game
And there is a 2006  adventure board game- Turn and Taxis-  whose object is to string together a lucrative postal network by taking ownership of mailboxes in cities along the way. 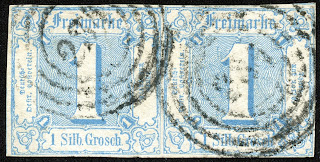 Of those, 18 are CV $1+-$2+, or 33%. All of the low value CV stamps are for unused condition. Clearly, the WW classical era collector can add some classical Thurn and Taxis stamps to the collection without much expense.

Most of the rest of Thurn and Taxis stamps are moderately expensive to expensive (CV $10+-$100+). Of interest, some stamps are much more expensive used. For instance, the Northern District 1866 "Rouletted in Colored Lines" Scott 31 2sgr blue is CV $1.50 unused, while CV $1,300 used! As one would expect, Scott has a note that, when stamps are much more CV valuable used, there are plenty of forged cancellations around. 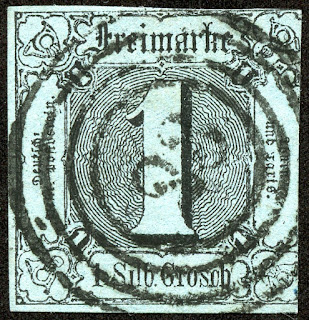 Northern District 1853 Scott 5 1sgr black/light blue
Between 1852-1858, a seven stamp imperforate typographic issue was used for the Northern District. The stamps are black, but imprinted on colored paper. 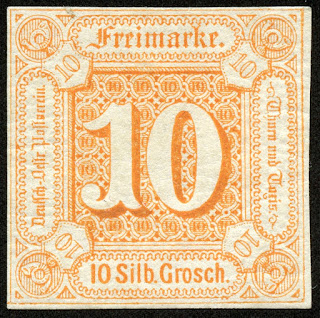 Note the posthorns in the design, which are found on all of Thurn and Taxis's stamps. 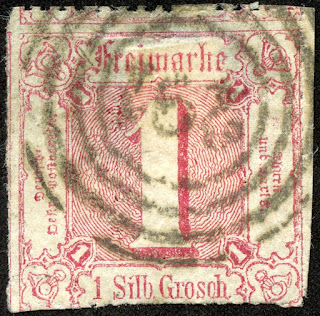 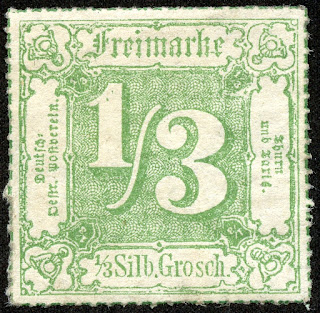 Northern District 1866 Scott 28 1/3sgr green
Rouletted in Colored Lines
The 1866 issue of six stamps was rouletted in colored lines, as shown. CV is $1+ unused for all the stamps in the issue. 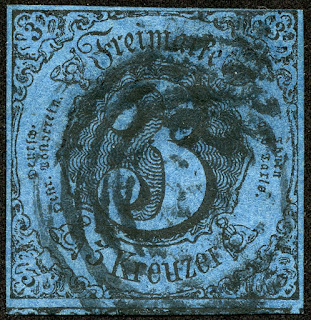 Southern District 1852 Scott 43 3kr black/dark blue
A five stamp imperforate issue, printed in black on colored paper, was released in 1852-53 for the Southern District. CV used is $10+-$20+ for four stamps. 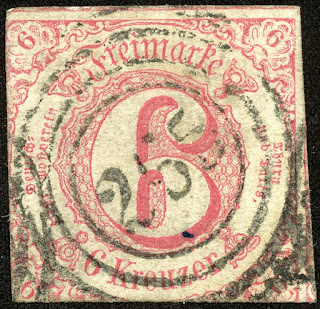 Southern District 1859 Scott 49 6kr rose
In 1859,  an imperforate six stamp set in various colors on white paper was issued. The numbers inside the concentric cancellation disclose which city the stamp originated from. I don't have the city code matrix, but it no doubt would be available in the philatelic literature if one wished to dig deeper. 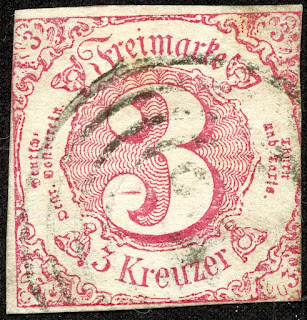 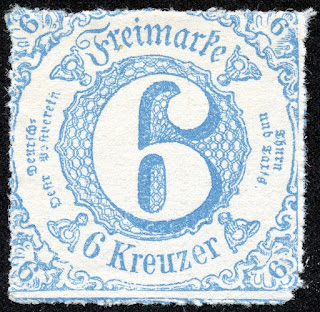 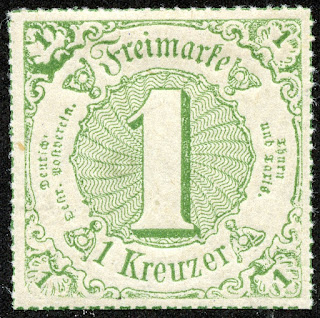 Southern District 1866 Scott 60 1kr green
Rouletted in Colored Lines
Finally, a four stamp set, which was rouletted in colored lines, was issued in 1866. CV is $1+ unused.

The Thurn and Taxis stamps (both Northern and Southern Districts) were replaced by those of Prussia on July 1, 1867. 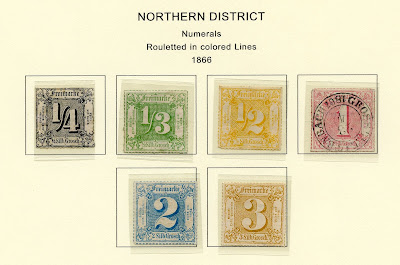 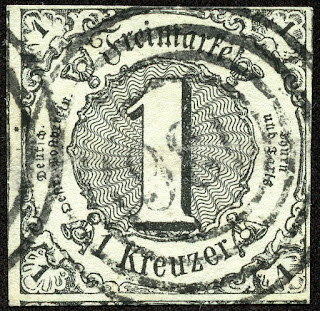 The coverage for Thurn and Taxis is actually located and placed as the first page of Germany. The BB Table of Contents, consequently, does not list Thurn and Taxis separately- or at all. (That goes for the North German Confederation also.)

Remarkably, perhaps, there are no spaces in the '69 BB that require an expensive (CV $10+) stamp. 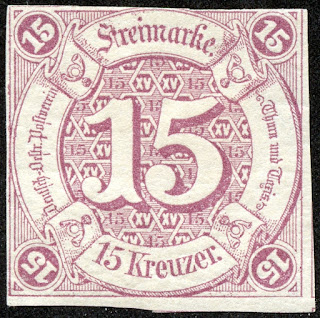 Southern District 1859 Scott 51 15kr lilac
Out of the Blue
I'm fascinated by the Thurn and Taxis postal history, but couldn't find as much detail as I would like in cyberspace about it. When I get a chance, I will visit a philatelic library and do some more research.

Note: Map, and Coat of Arms scan images appears to be in the public domain, while the Thurn and Taxis Board Game image (copyright) is presented here for educational purposes.