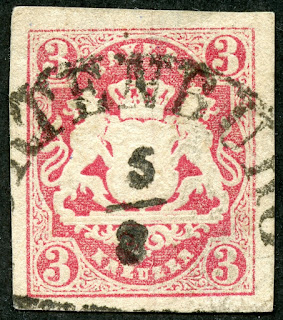 1867 Scott 16 3kr rose "Coat of arms"
Embossed; Imperforate; With Silk Thread
Into the Deep Blue
Continuing our investigation into the early issues of Bavaria,, this blog post will look at the embossed "Coat of Arms" issues of 1867-1911.

The preceding Bavaria posts are here...

There are also in the Scott catalog many minor number shade stamps that are listed.

An overview of the "Coat of Arms" issues looks like this..

A bit of advice: I think this blog post will make a little more sense if one follows along by looking at the Scott catalogue at the same time.

But, in reality, it is not so difficult, at least at the level of the Scott catalogue. (For serious collectors, a Michel should be used also.)

One just needs to identify the denomination - simple!..either Kreuzer or Pfenning values.

And then identify the watermark, which is usually fairly obvious.

And for some issues, splitting the paper into "white" or "toned" will give a major or minor number. 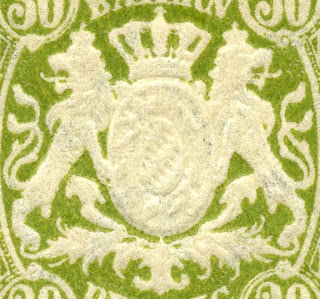 Coat of Arms; Embossed
Used on Bavarian Stamps 1867-1911
All the Bavarian "Coat of arms" issues have this embossed design. 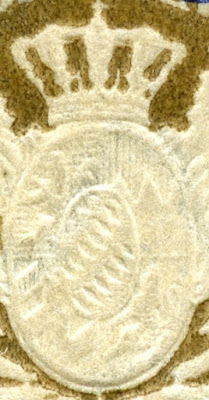 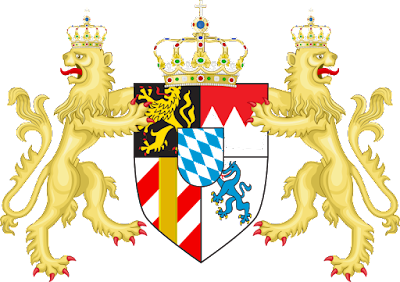 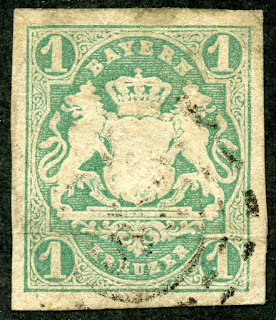 This is the only issue that is imperforated. There is a vertical silk red thread embedded in the paper on the reverse side, as we will see soon. 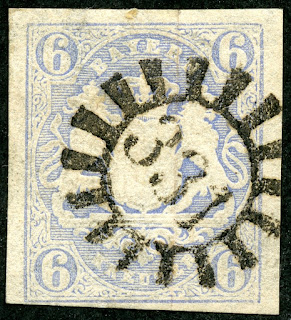 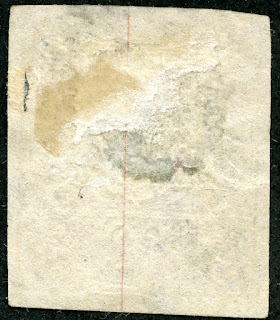 1867-68 "Coat of Arms" Issue; Imperforate
Has Vertical Red Silk Thread Embedded
The back of the imperforate stamp should have a fairly obvious vertical red silk thread embedded. This is a good identification feature to verify that one has a legitimate 1867-68 imperforated issue. 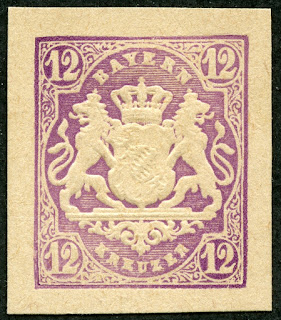 12kr lilac "Coat of Arms"
Very stiff and thick cardboard
Probable Postcard Cut Square?
I have several stamps, a 6kr bister, and a 12kr lilac that are on very thick "postcard" like paper with printing on the reverse. Scott says nothing about them. I assume they are postcard cutouts? Readers? 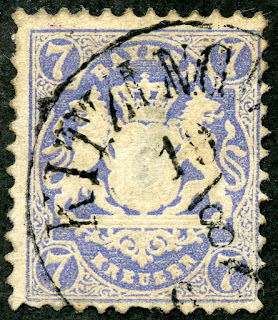 Note that these stamps do not have a silk thread embedded, and, in fact, none of the remaining "Coat of Arms" issues do.

This issue contrasts with the same time period issue of eight stamps that have a "Shorter Diamond" (Wmk 93), as we will see next. 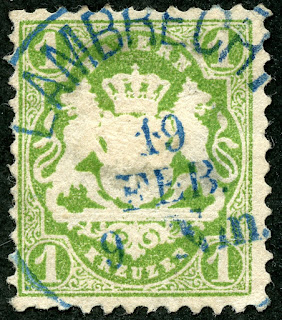 The Wmk 93 stamps command a higher to a much higher CV price in the catalogues.  But, the Wmk 93 1kr green and the 3kr rose stamps are only CV $2+-$9+, so the collector should check those denominations especially, as the collector could have the more elusive wmk 93 stamp. 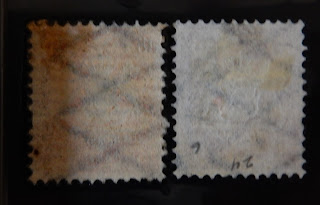 Left: Wmk 92 "Longer, Diamond" 17 mm wide
Right: Wmk 93 "Shorter Diamond" 14-15 mm wide
The "Longer Diamond" ( rhombus) watermark (Wmk 92) is 17mm wide. In contrast, the "Shorter  Diamond" (Wmk 93) is 14-15mm wide. I will say right now that it can be a bit confusing - I certainly have been fooled. Careful examination of these two watermarks may be necessary. Generally, Wmk 92 stamps are much less CV wise then Wmk 93 stamps. Also, in Scott, Wmk 93 stamps are minor numbers. 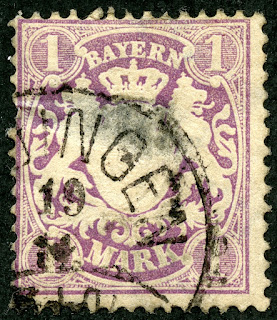 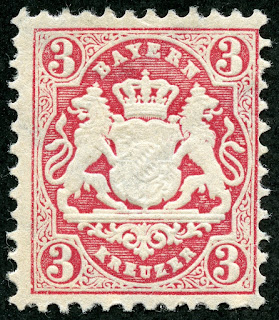 CV is <$1-$30 for the five stamps. Since this issue was short lived, unused is much less CV wise than used. Fake cancellations exist. 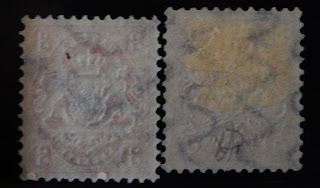 
Here is a Wmk 94 "Horizontal Wavy Lines Wide Apart" example. Also shown is a Wmk 95v "Vertical Wavy Lines Close Together" that we will encounter on later "Coat of Arms"issues..These watermarks are usually fairly easy to determine. 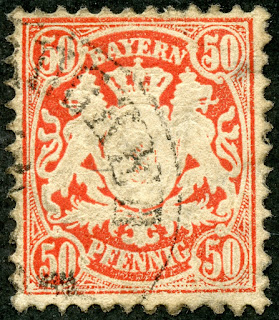 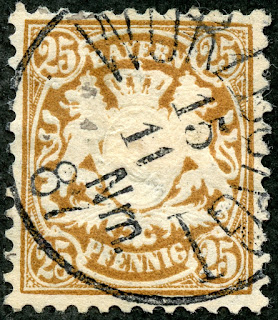 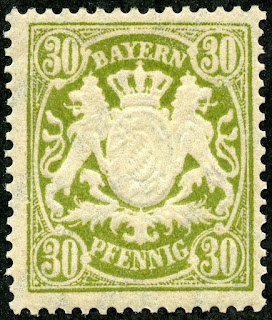 CV is <$1-$9+ for the fourteen stamps listed as "major numbers". There are also a number of denominations listed with minor number color shades.

There are paper differences: "white paper" vs "toned paper" for a number of denominations. More about that soon. 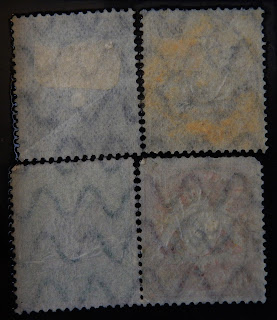 Wmk 95h: "Horizontal Wavy Lines Close Together"
Here is a good look at Wmk 95h. The watermark is rather easy to determine. 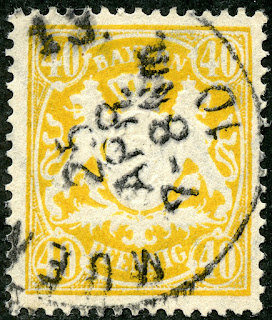 Scott has major descriptive numbers for ten denominations listed under "white paper". It then lists, under "toned paper" ( between 1888-1899), four major numbers and eight minor numbers. 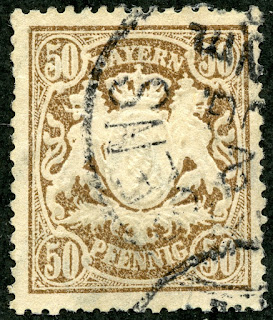 Finally- not illustrated here specifically, but I will mention for completeness sake: There were five "Coat of Arms" stamps issued in 1911 (5pf on Wmk 95v paper- Perf 14 1/2; Four mark values on Wmk 95h paper-Perf 11 1/2). These can be differentiated from the preceding issued denomination/ same color stamps by a change in watermark. 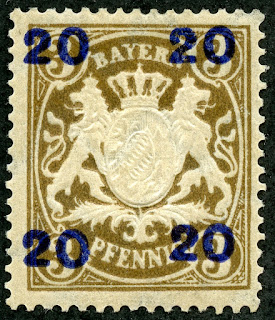 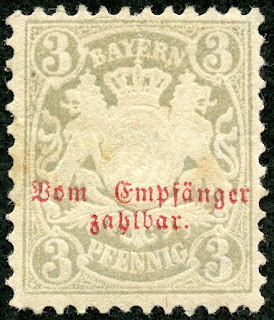 The overprint said "To be paid by recipient". 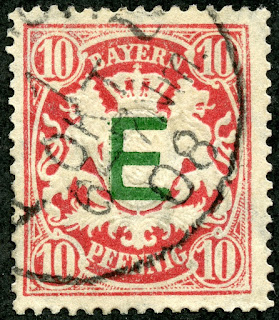 There are some missing spaces that the collector might want to add by perhaps including a quadrilled page or two. 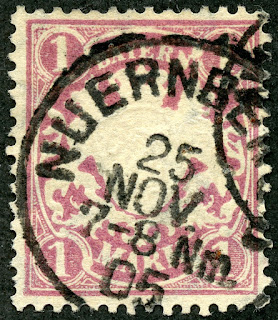 1900 Scott 54 1m rose lilac; Perf 11 1/2
Wmk 95v
Out of the Blue
I think the presentation here makes the "Coat of Arms" issues appear more complicated than they are when confronted by these stamps.

Note: Bavarian Coat of Arms pic appears to be in the public domain.