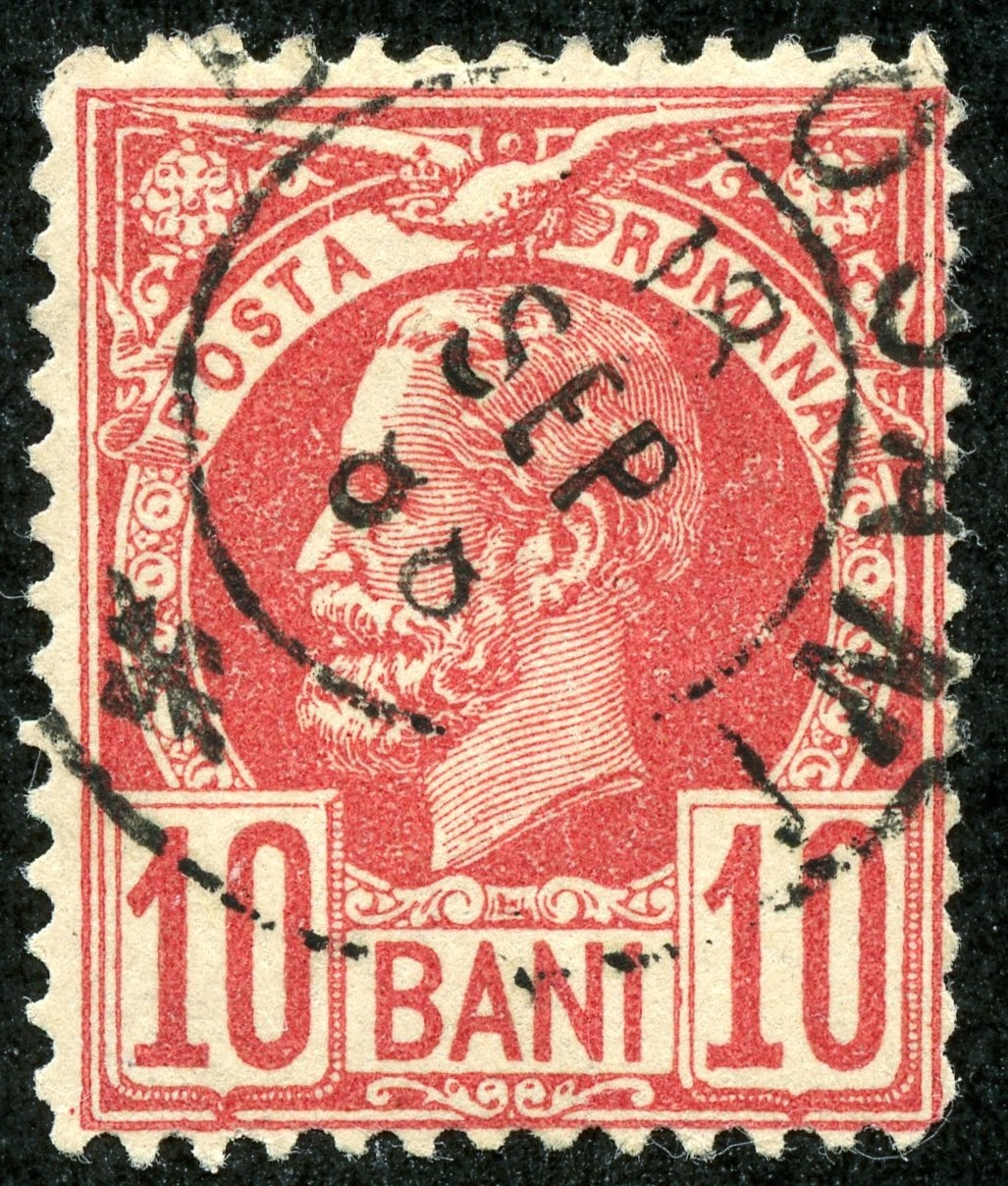 1885-89 Scott 84 10b rose/pale buff "King Carol I"
Quick History
Karl of Hohenzollern-Sigmaringen, well placed with relatives in both the Prussian ruling family and the French Bonaparte family, became King of Romania in 1881 after fifteen years as the Romanian Prince.

Romania, during this period, was heavily influenced by French culture, which clearly is reflected in the stamp designs.

Since territorial gain/loss is a zero sum game, read  about the dismantling of the Austro-Hungarian Empire here.... 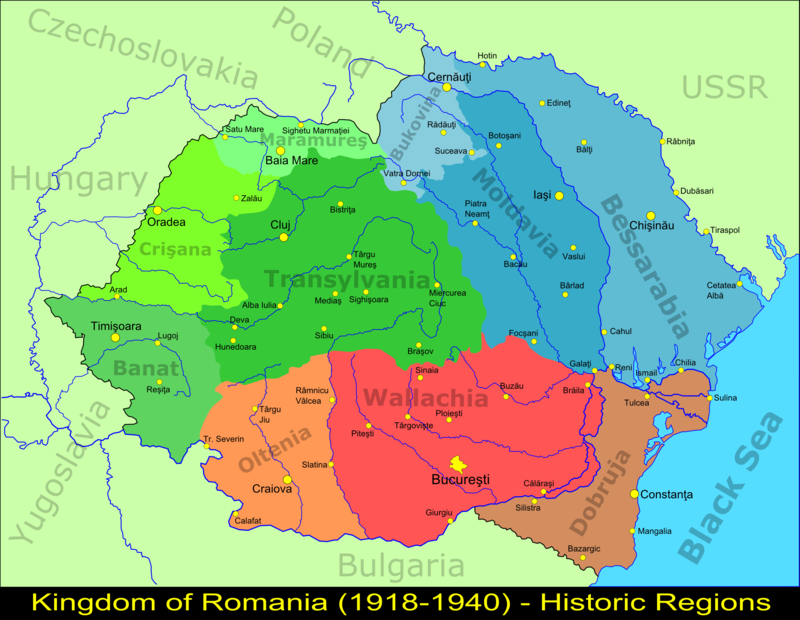 Historical Regions of Greater Romania 1918-40
Greater Romania, between 1918-40, enjoyed excellent economic growth, and advanced to second in Europe in both oil and food production. 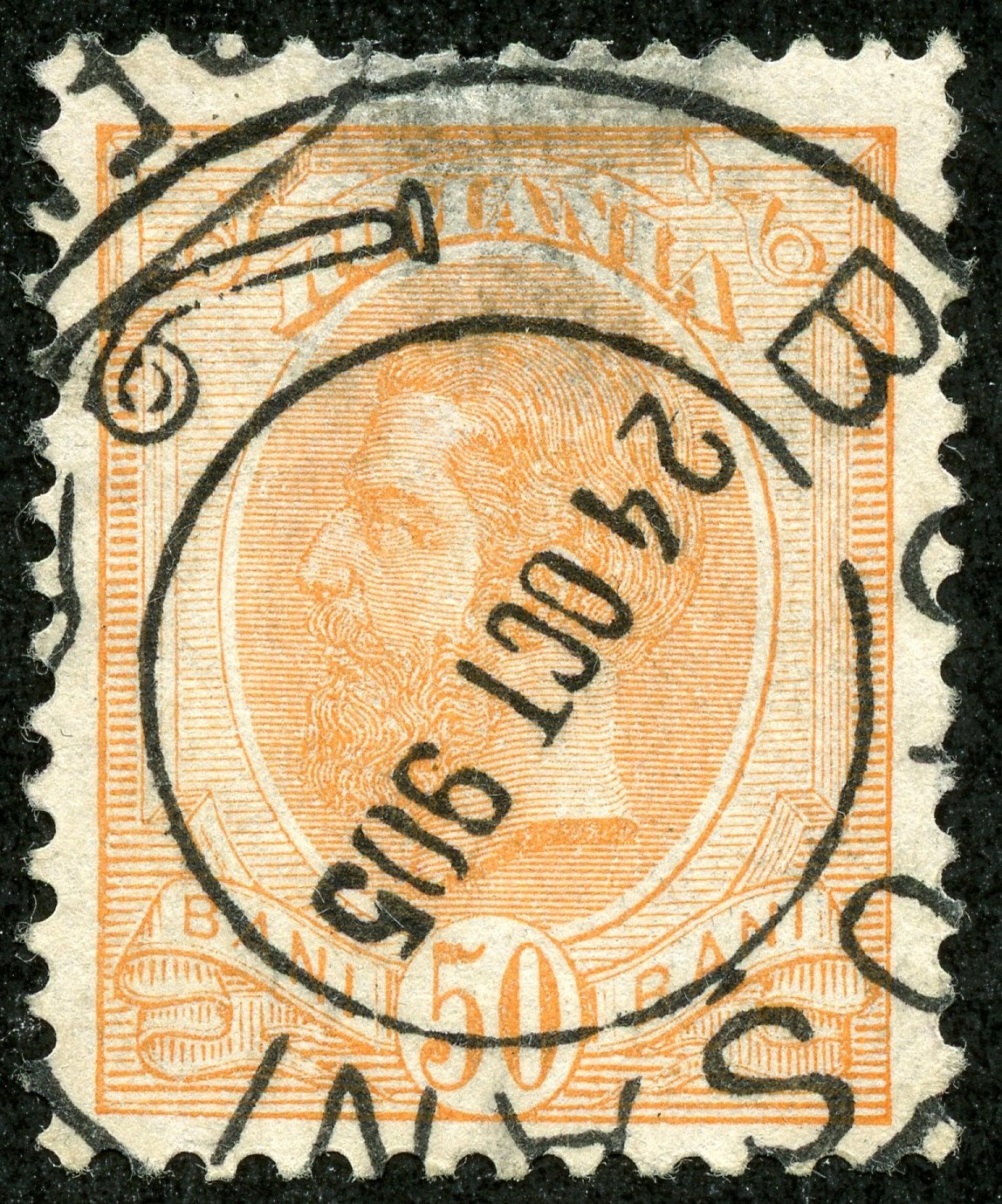 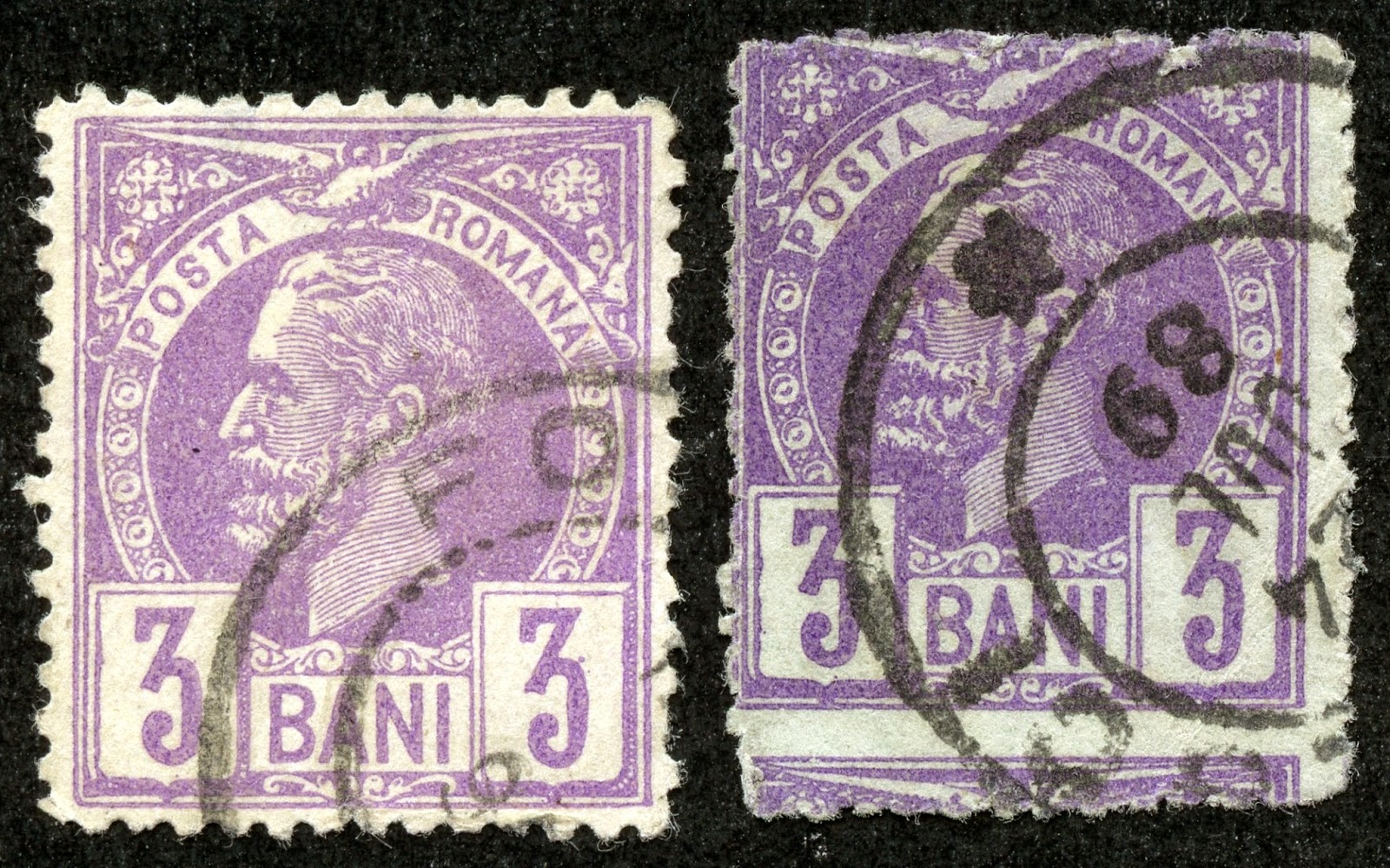 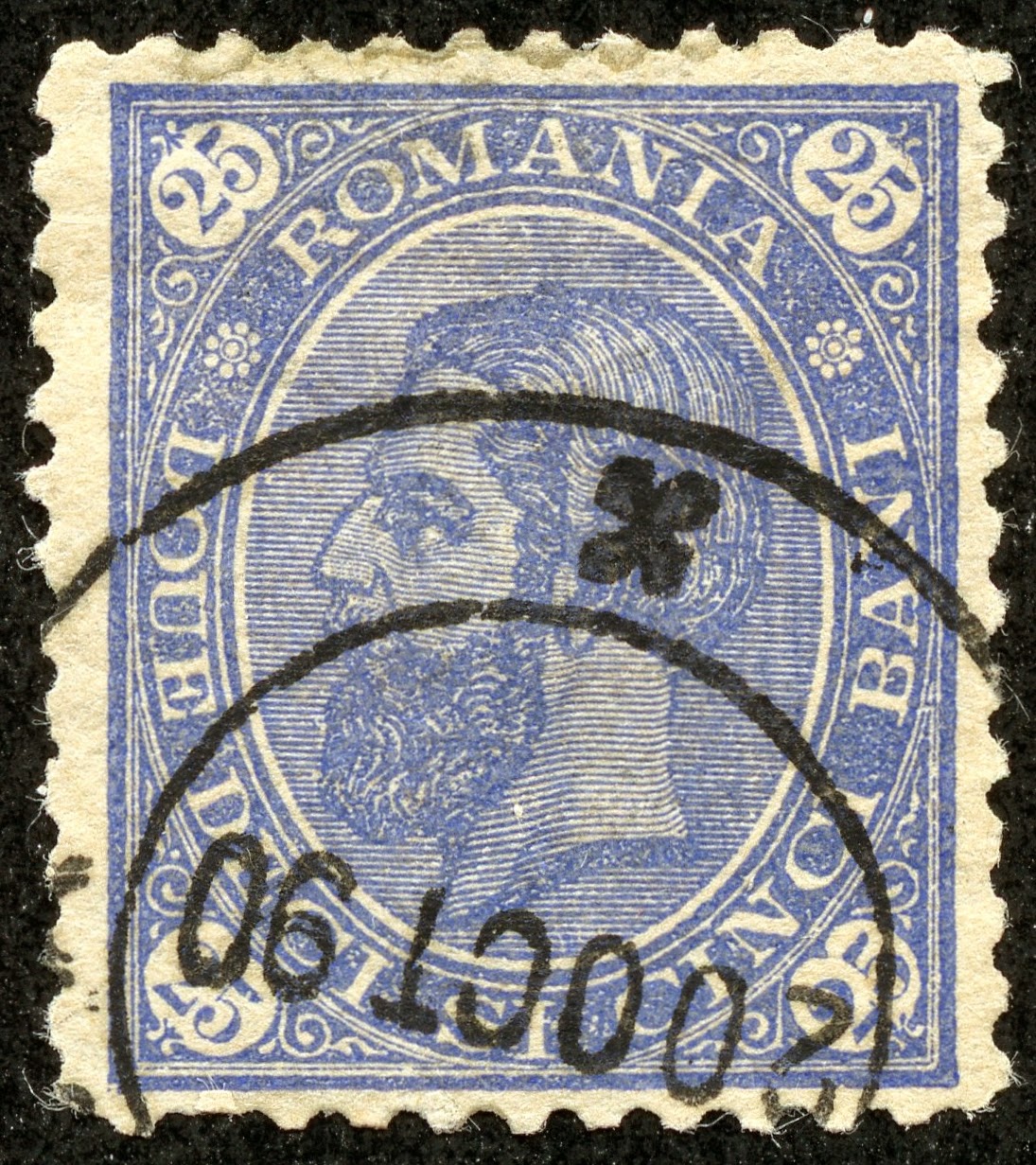 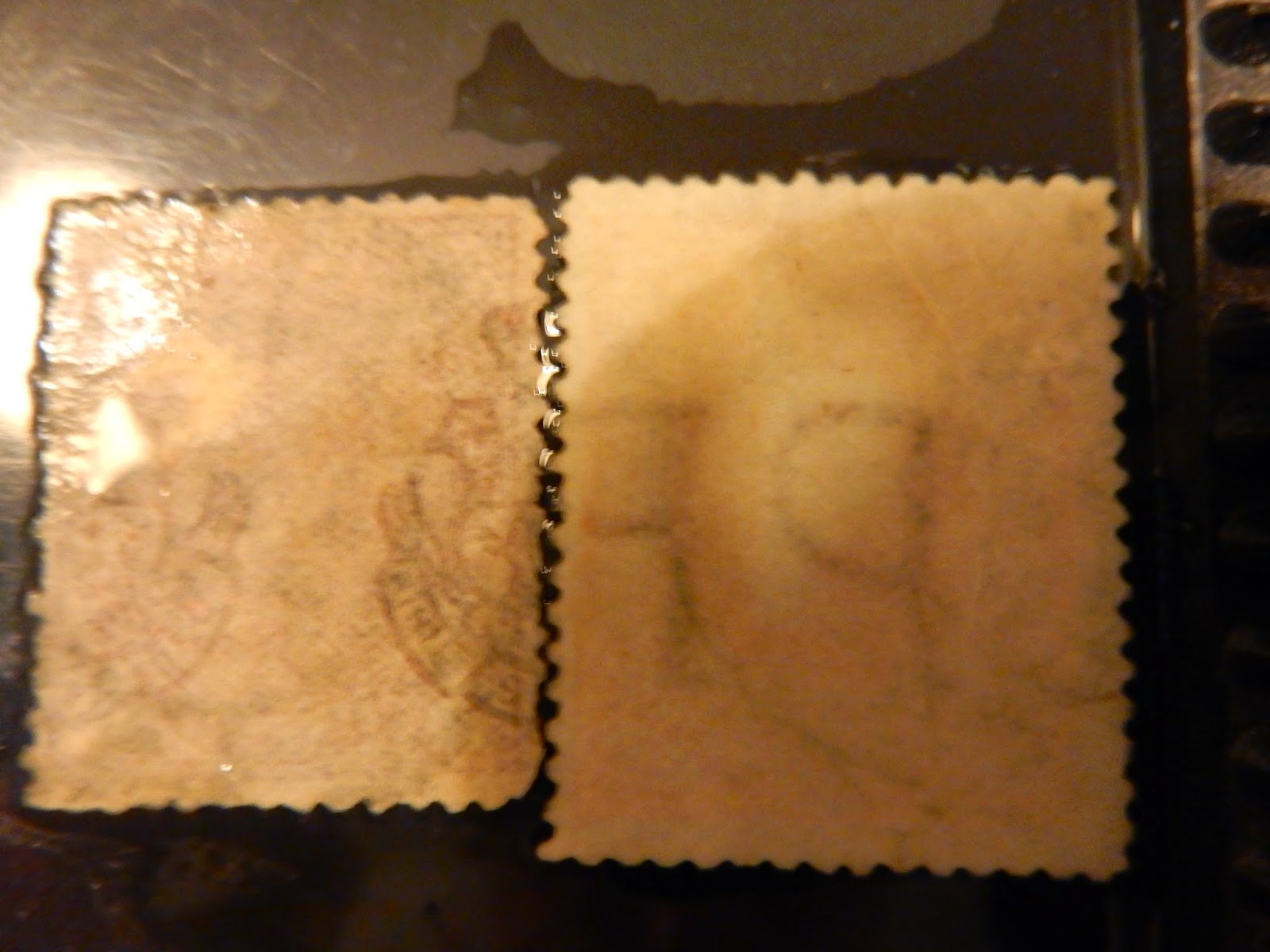 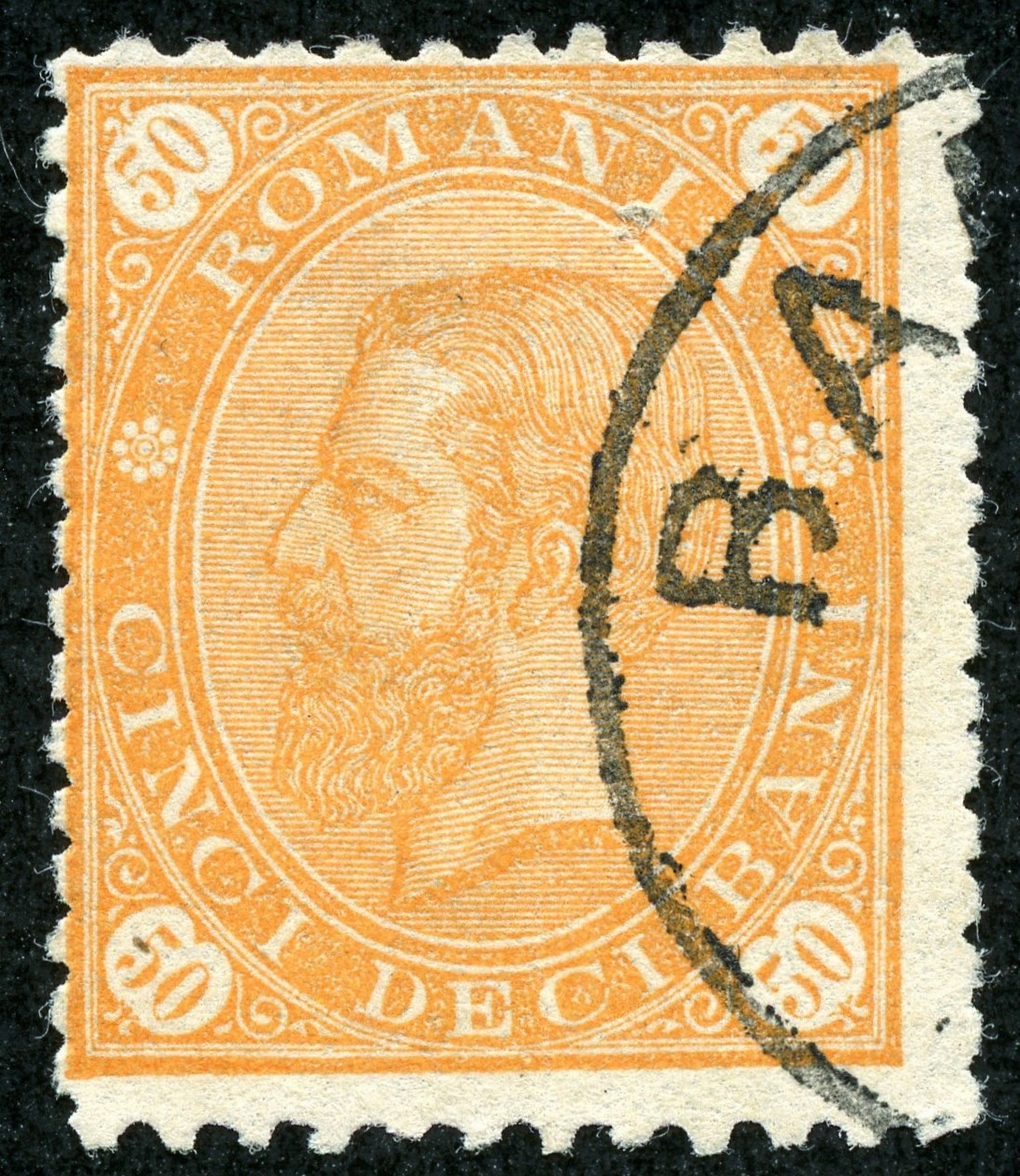 1891 Scott 107 50b orange, Unwmk
In contrast, the 1901 seven stamp issue, with the same or slightly different colors compared to the 1890 issue,  had no watermark. Yes, watermarking this design will be necessary. ;-) 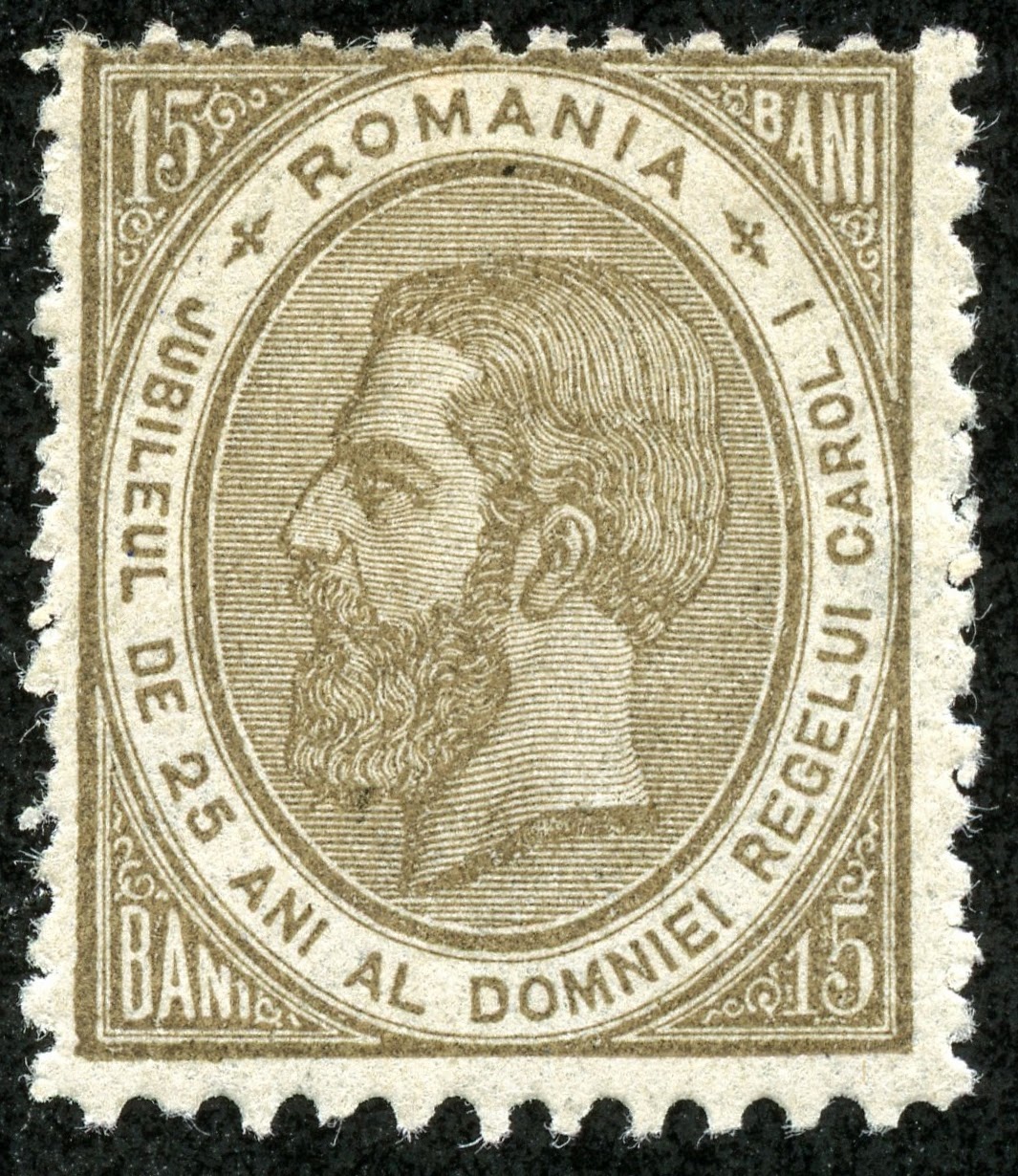 In 1894, four more stamps were issued, several in similar colors, but with watermark "PR".

Forgeries have been produced for this issue.

For a genuine specimen, look at the horizontal shading lines inside the vignette oval. The uppermost line is thicker in the middle and tapered at both ends. The lowest shading line is curved upwards at one or both ends.

In contrast, a common forgery has short straight shading lines of the same thickness as the other shading lines for the uppermost and lowest lines, according to Varro Tyler (Focus on Forgeries -2000).

(For those using- "Focus on Forgeries "c2000- be aware that the illustrations for the genuine vs forgery is mistakenly switched for this issue.) 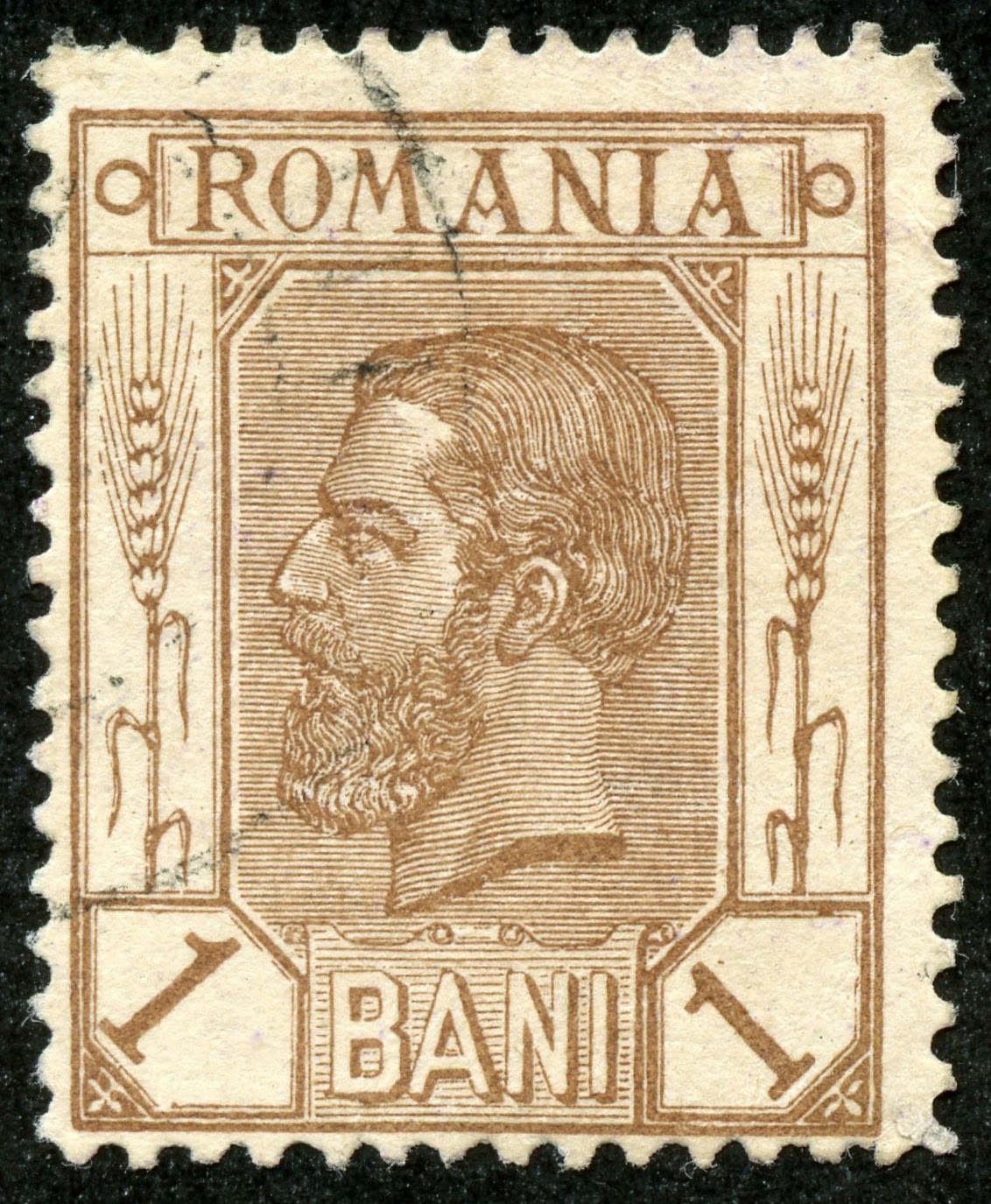 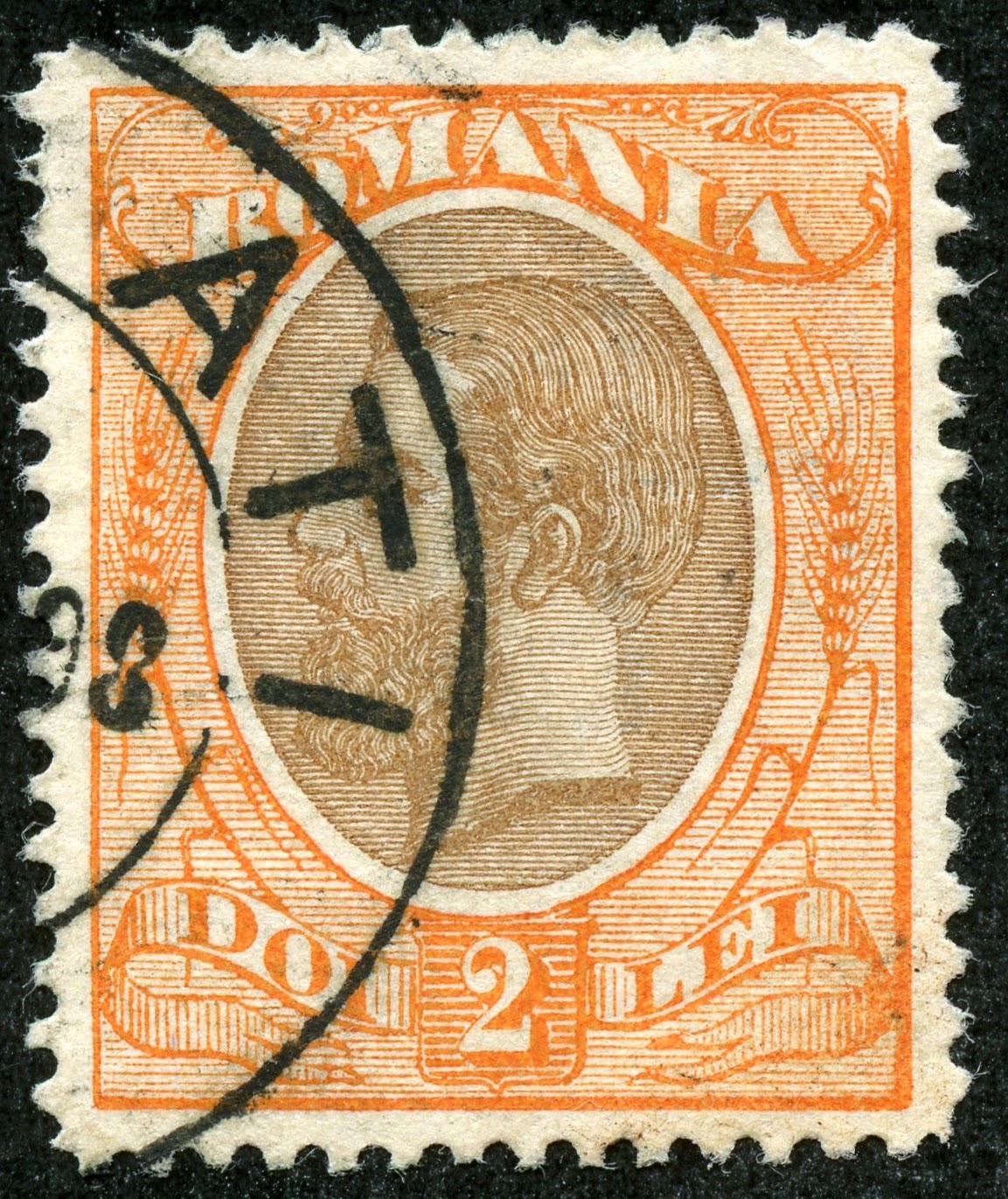 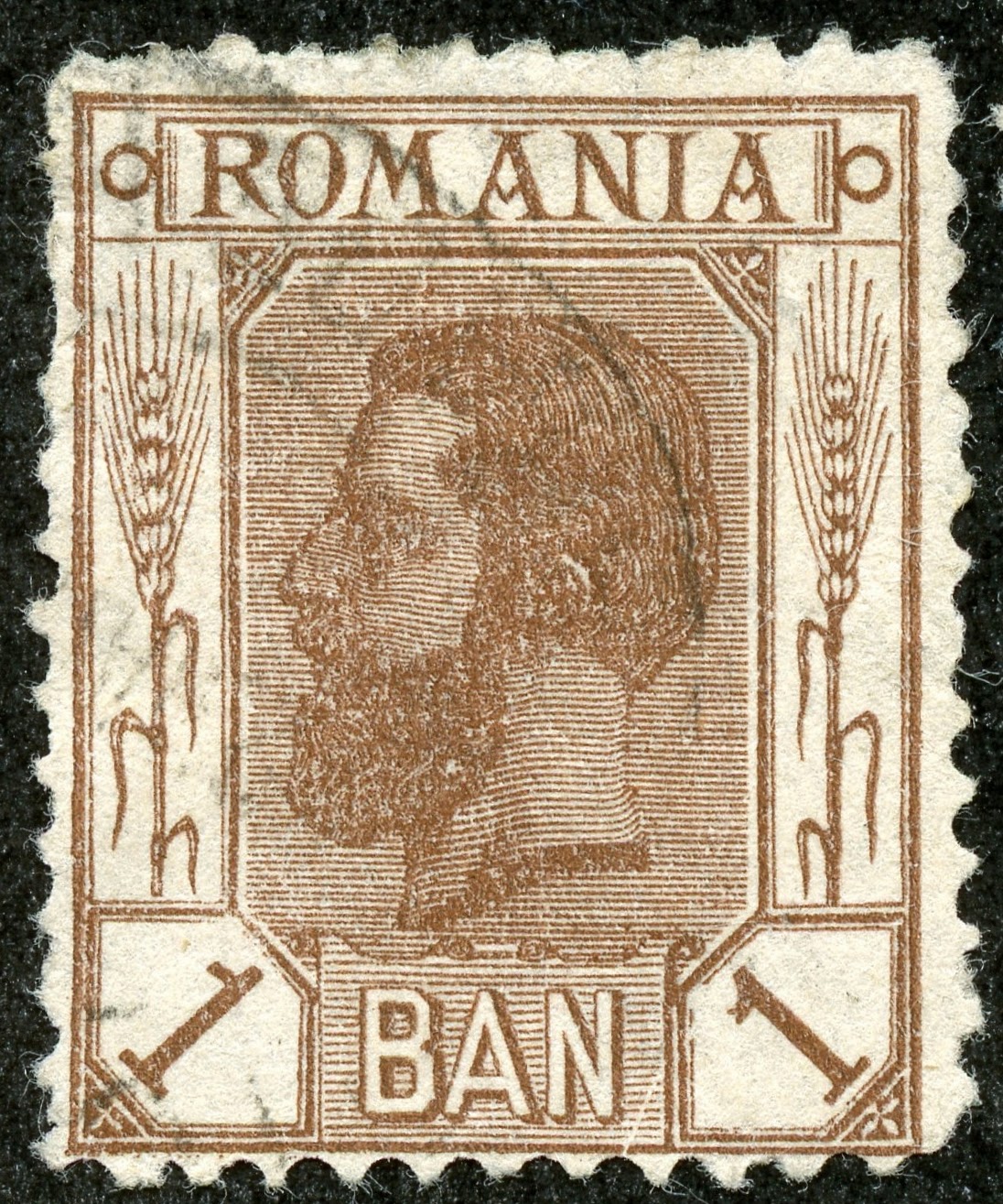 1901 Scott 133 1b brown, "Ban" script
Using the same design, but on unwatermarked paper, another 16 stamp issue was released between 1900-03. Some stamps have the same color as the 1893-98 stamps, and some have different colors

Scott states this issue is characterized by thin paper, and tinted rose on back. I did not appreciate the distinction much, finding the unwatermarked state of the paper more helpful. 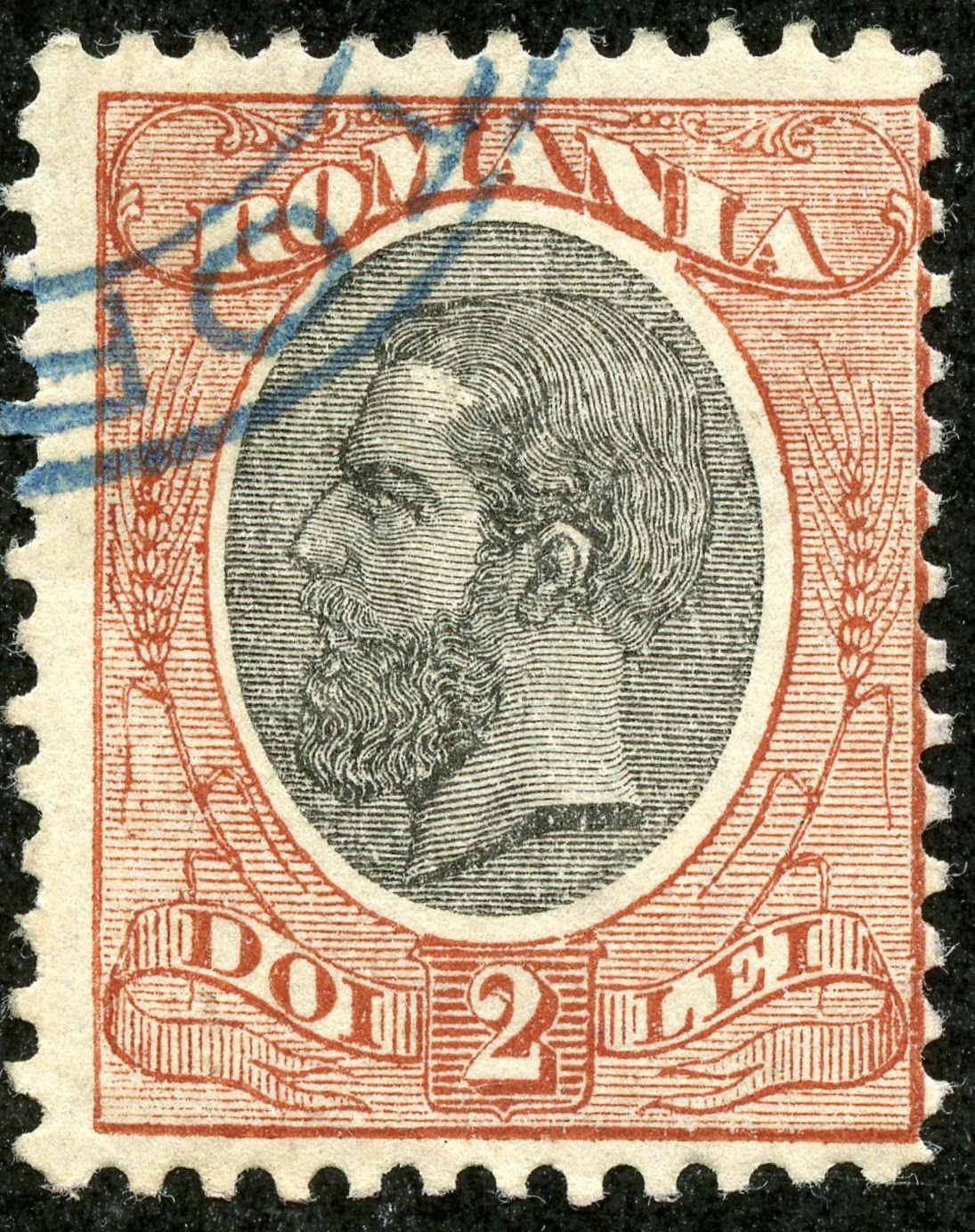 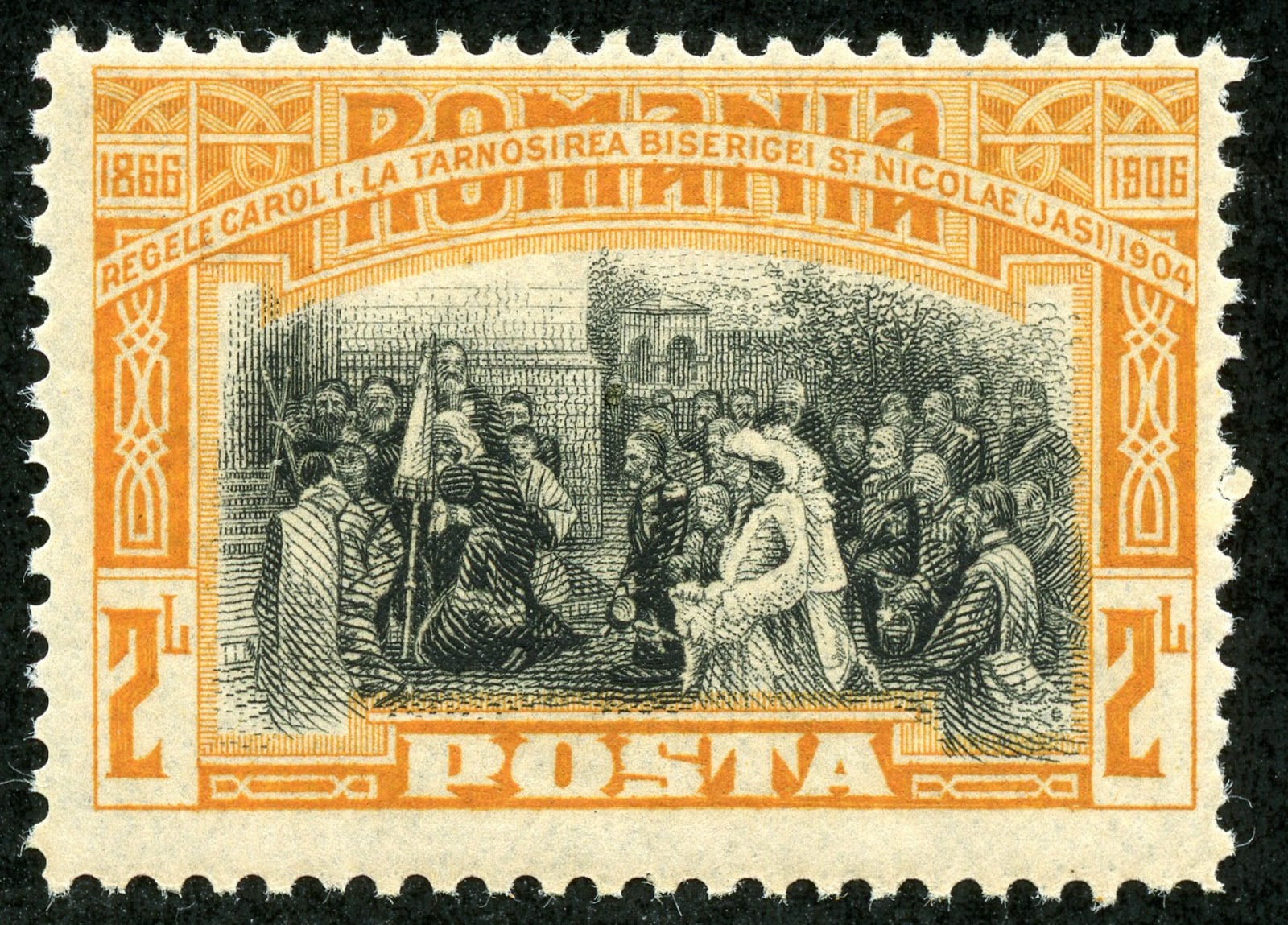 1906 Scott 185 2 l orange & black
"King Carol I at Shrine of St. Nicholas"
40 Years Rule of Carol I as Prince and King
The year 1906 was the 25th anniversary of the Kingdom and the 40th year of rule for Carol I. Naturally, stamps marked the occasion.

A lovely engraved ten stamp bicolored issue was released for the 40 years of rule for Carol I as prince and king. The issue has various scenes of his official life. 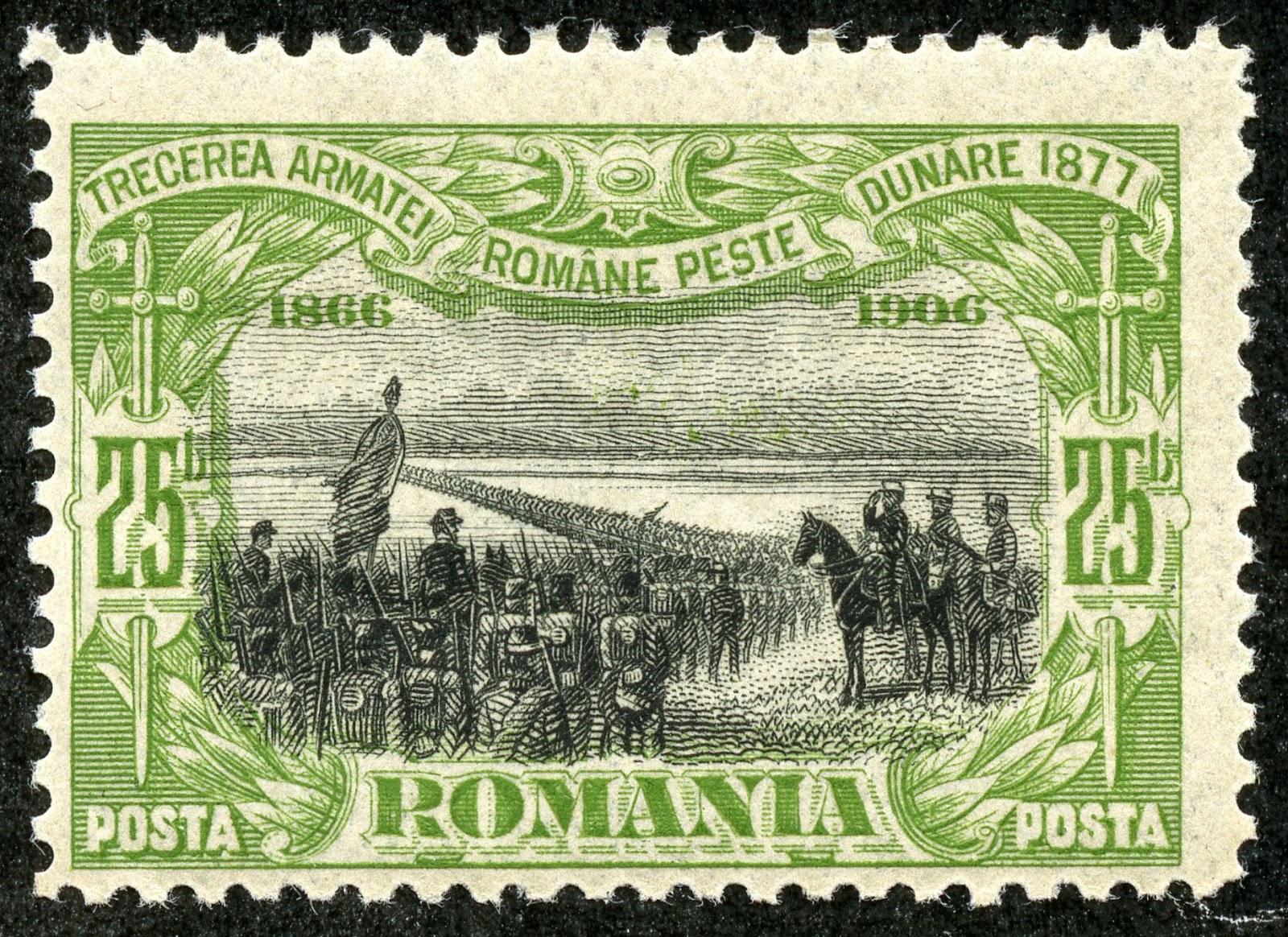 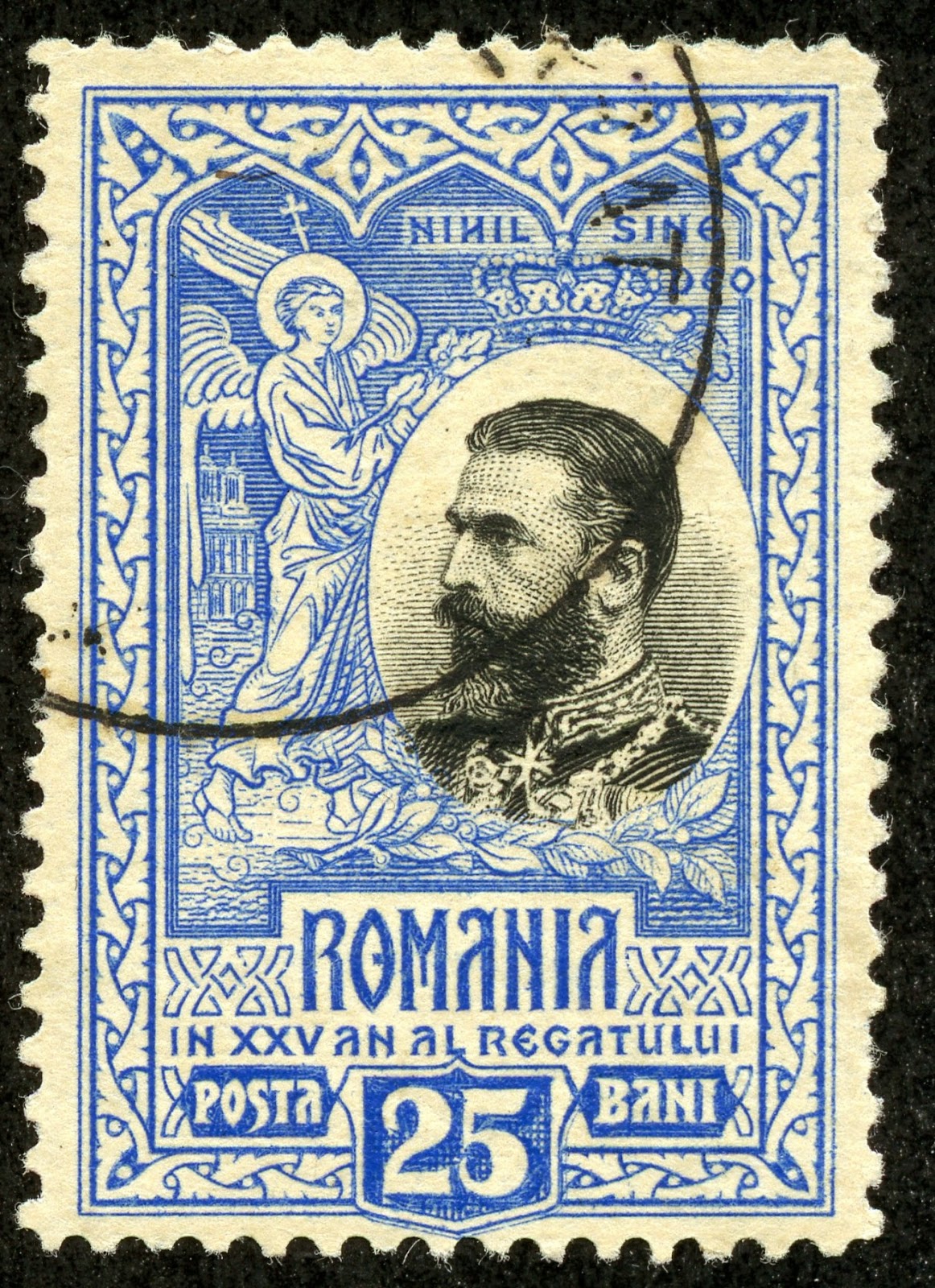 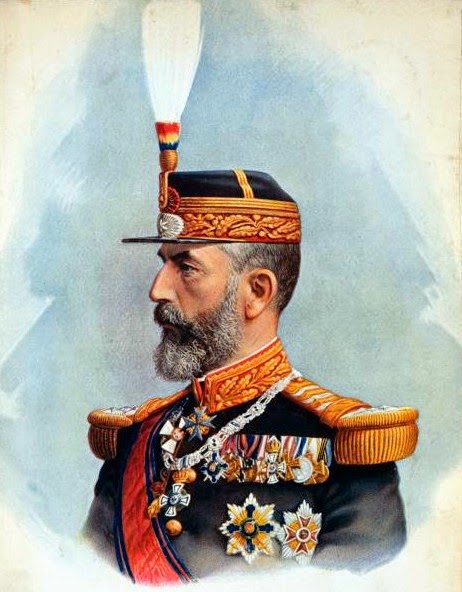 King Carol I
Carol I was an able commander, and led the Romanian troops during the Russo-Turkish War. 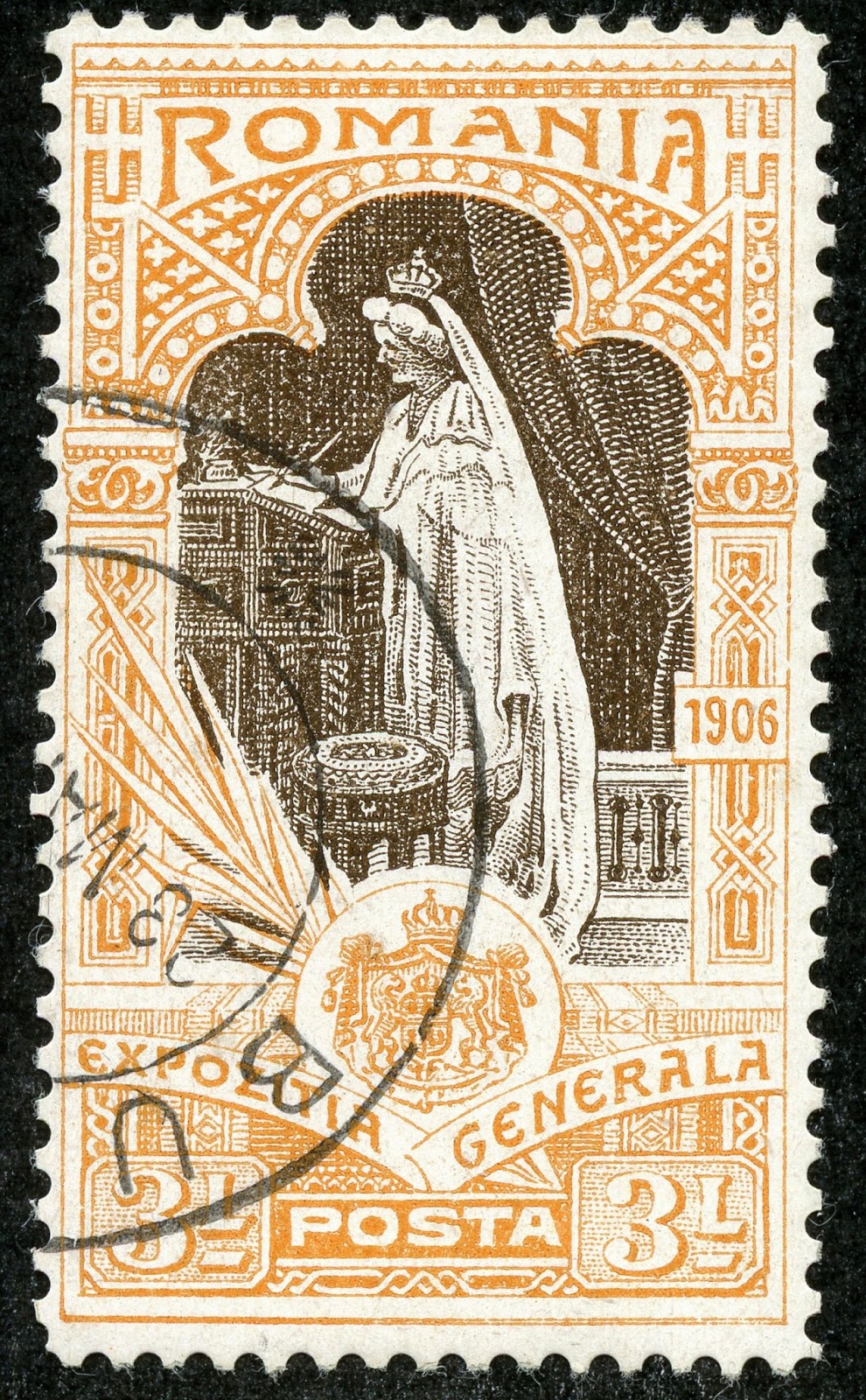 1906 Scott 206 3 l brown orange & brown
"Queen Elizabeth (Carmen Sylva)"
Another eleven stamp issue was released in 1906 for the General Exposition. These stamps were only available July 19-31, 1906, and only valid for those dates! But the remainders were sold privately by the promoters of the Exposition. The CV for the lower denominations is $1+-$3, but the three highest denominations are CV $25-$42+. These higher denominations (1.50l, 2.50l, 3l) have also been forged.

The 3 l brown orange & brown (shown above) shows a small cross on the queen's crown in the genuine specimen. The forgery has a "blob" for the cross, according to Varro Tyler (Focus on Forgeries -c2000).

1908 Scott 211 40b bright green
Engraved; Various Shades
Between 1908-18, a 10 stamp engraved issue was produced. Here I show that, in my accumulation of 40b "bright green" stamps, there are, at least, three shades. ;-) I don't know if these shades are "real", or merely chemical changelings. 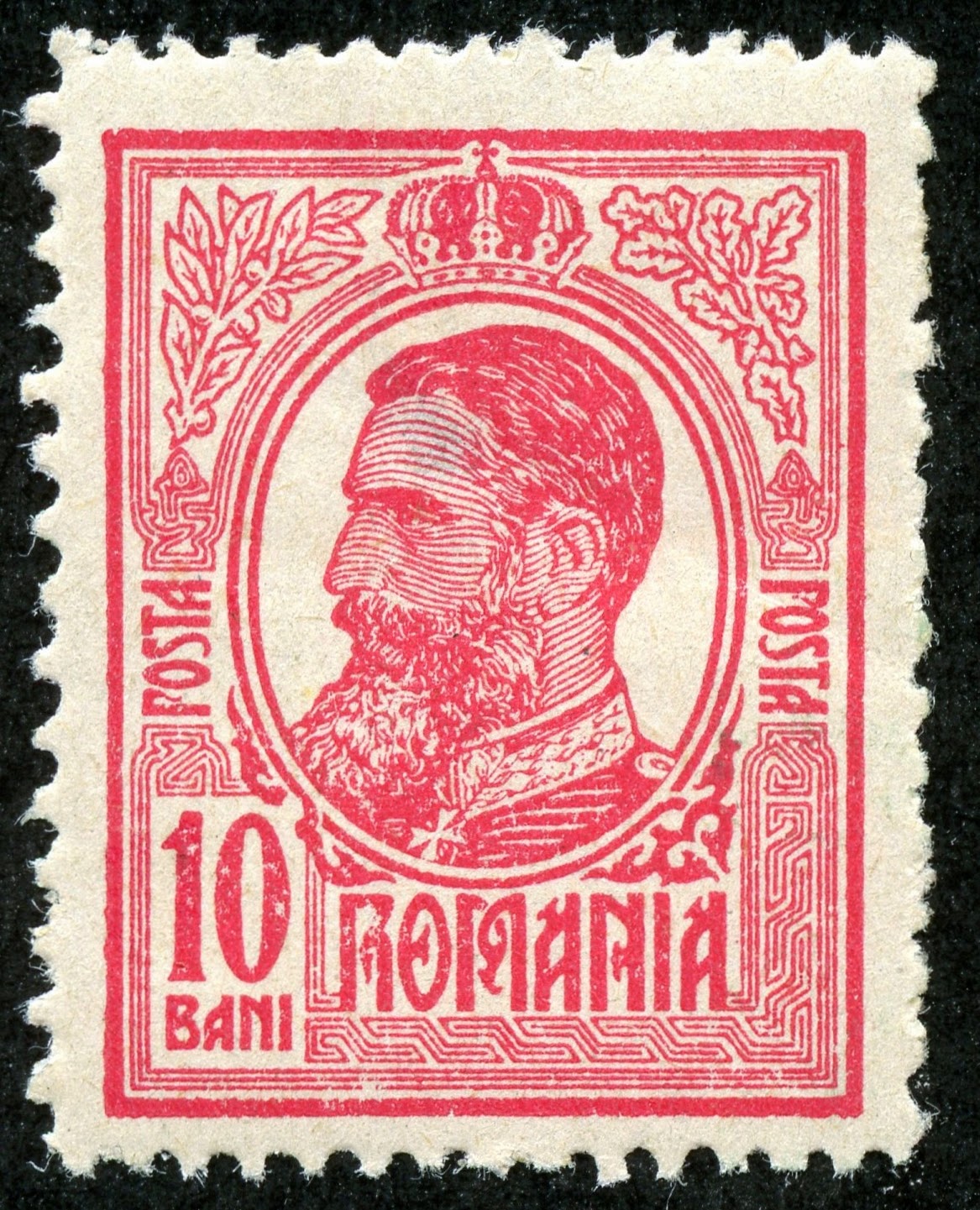 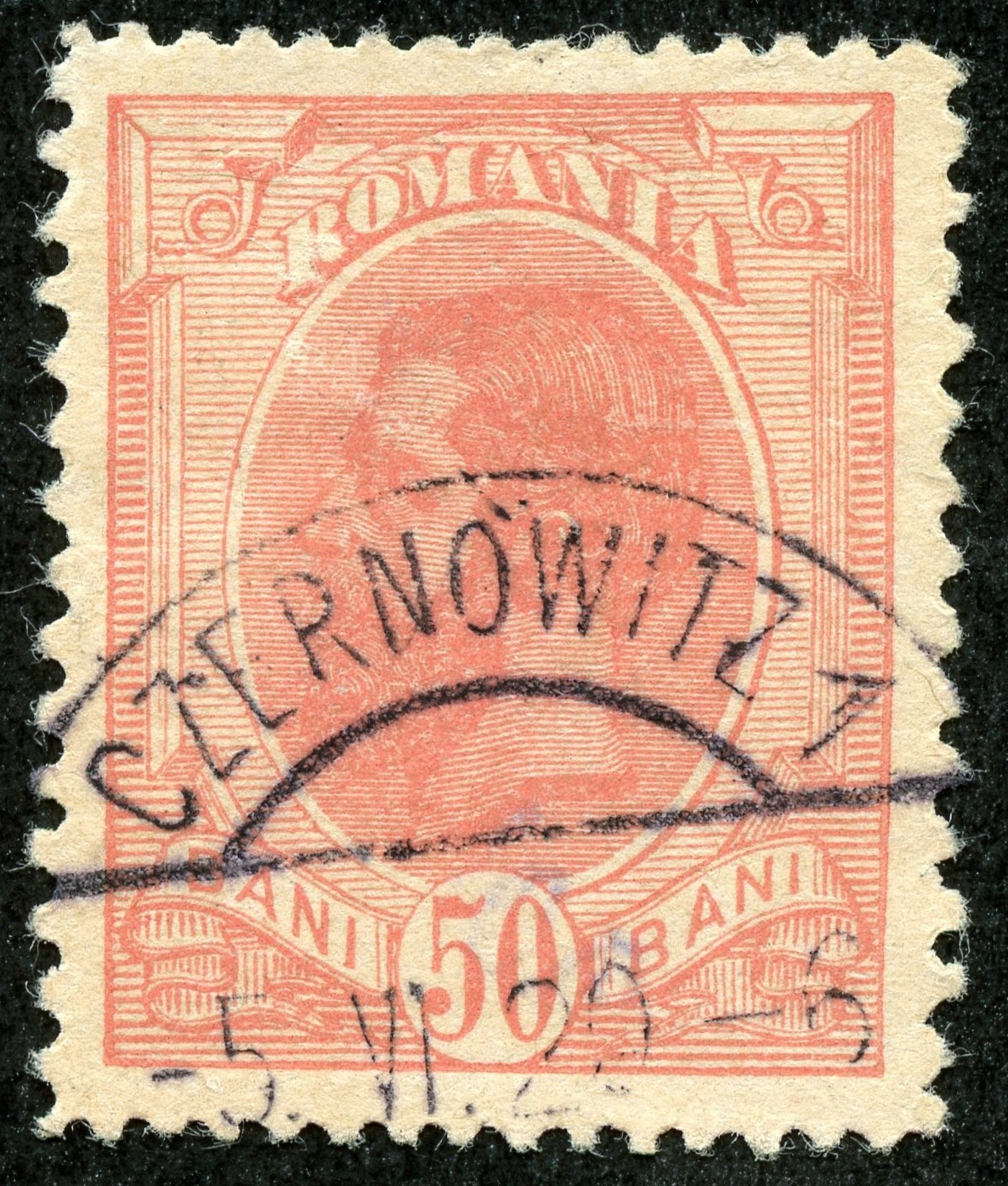 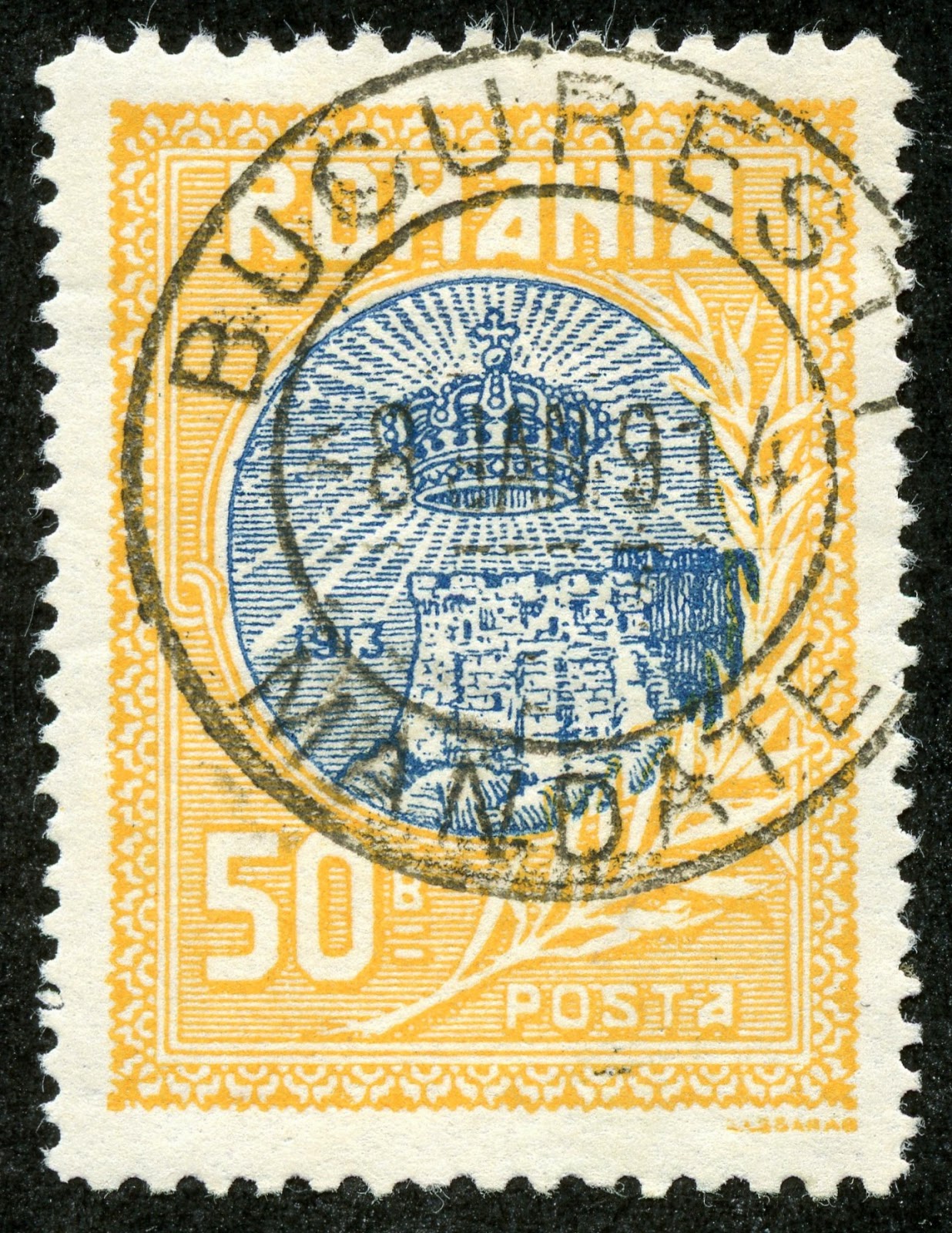 A ten stamp issue was released December 25, 1913 celebrating the annexation.

1918 Scott 241 5b yellow green, Overprinted in Black
Genuine, Forgery, Forgery
In 1918, a two stamp overprinted issue was released. The overprint was produced by typography. And, naturally, numerous overprinted forgeries also exist, even though the CV is <$1. Varro Tyler (Focus on Forgeries c2000) discusses some of the genuine and forgery characteristics. 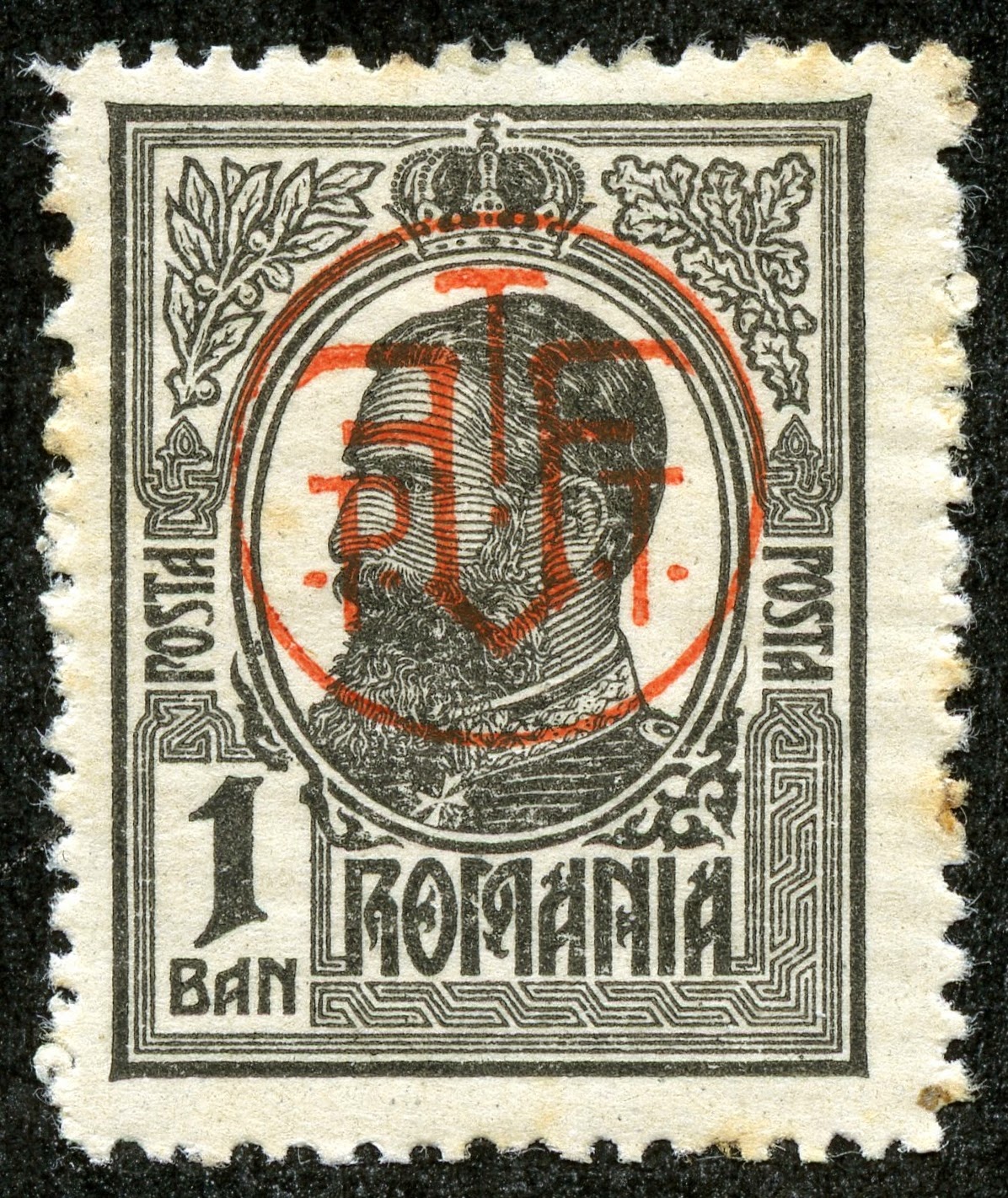 1919 Scott 245 1b black, Red overprint
Recovery of Transylvania and the return of the King to Bucharest
Ah, the territorial spoils of WWI! (And, in this case, vampires and Dracula! ;-)

Hungary (in various forms) had actually occupied Transylvania since the 10th century. But Hungarian, Romanian, and German speaking peoples could all be found there.

But after WWI, Austria-Hungary collapsed, and the ethnic Romanians of Transylvania declared unity with Romania on December 1, 1918.

Three stamps were overprinted in 1919 for the "Recovery of Transylvania". 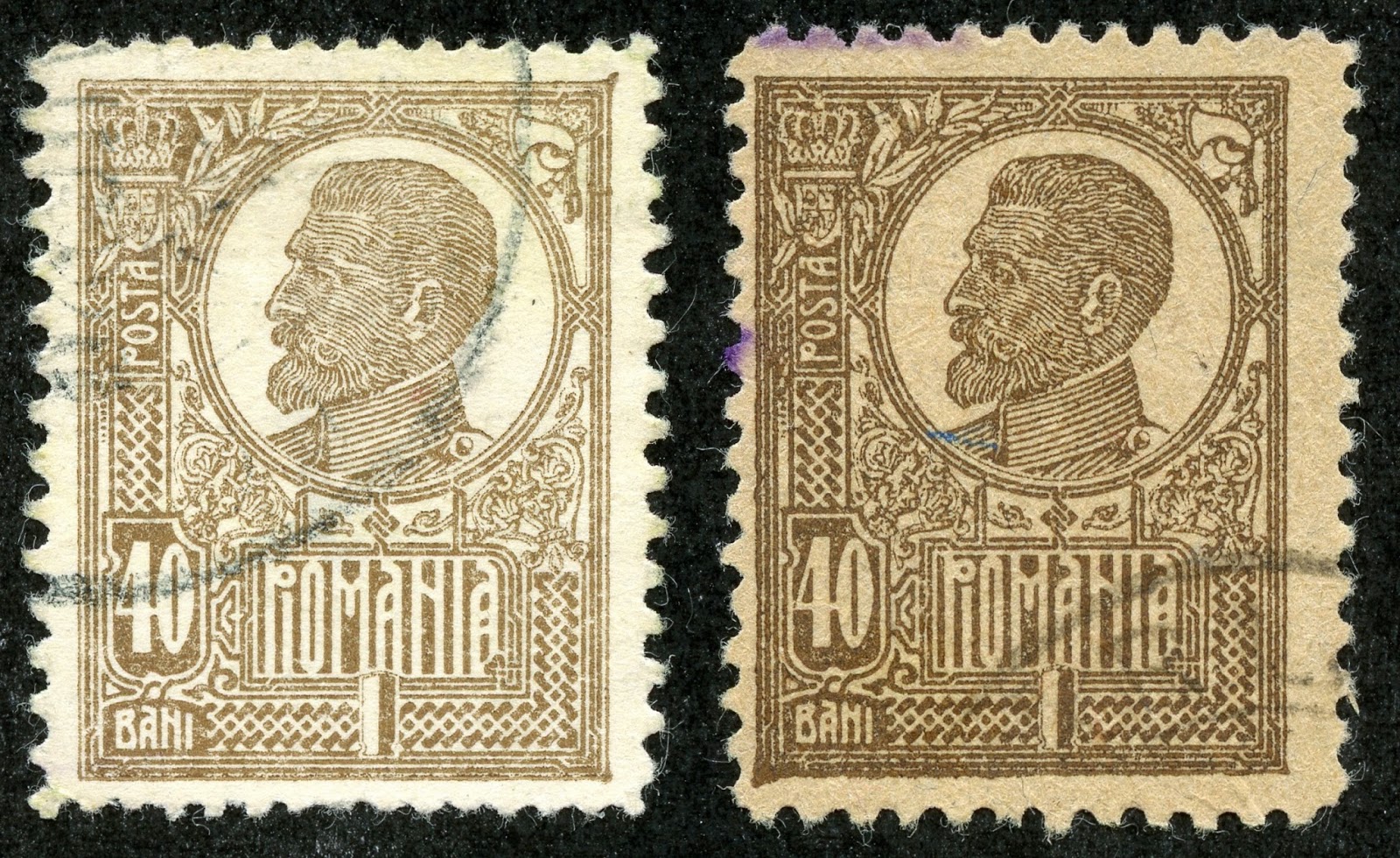 1920 Scott 254 40b gray brown "King Ferdinand"
White paper & Coarse paper varieties
The 1920-22 issue of thirteen stamps is found with either white or coarse grayish paper. The Scott catalogue, though, has not created any minor numbers for the paper varieties.

King Ferdinand had been king since October 10, 1914, but only in 1920 is there a stamp issue with his portrait produced. Ferdinand had been the heir-presumptive to the throne of his childless Uncle Carol I since 1886, as his father (1880), and  his brother (1886) had both renounced their rights.

Ferdinand's coronation didn't occur until October 15, 1922 at the historic princely seat of Alba lulia, in Transylvania.

Shown above are the three "2" numeral types. Scott has illustrations and descriptions for all the types. 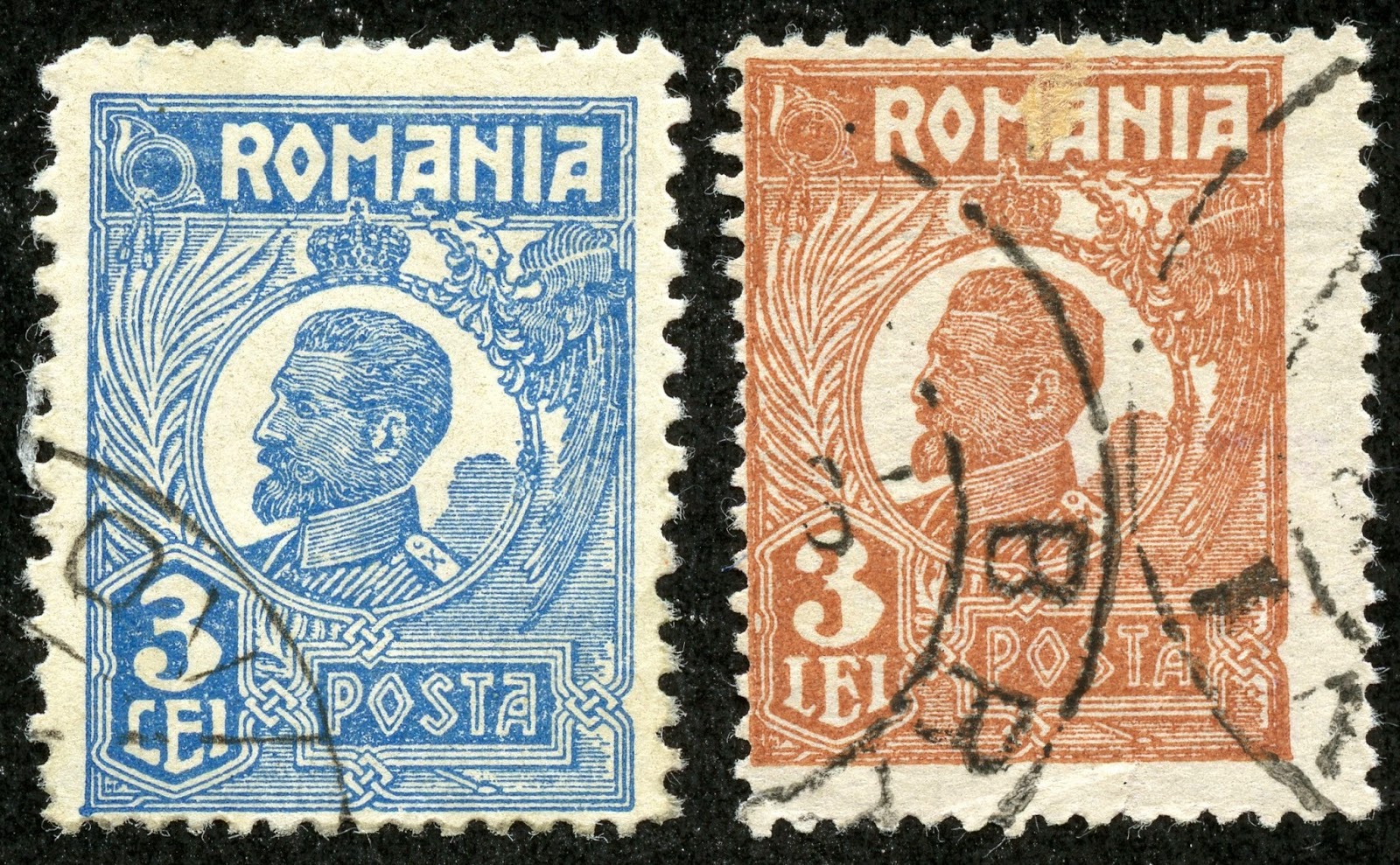 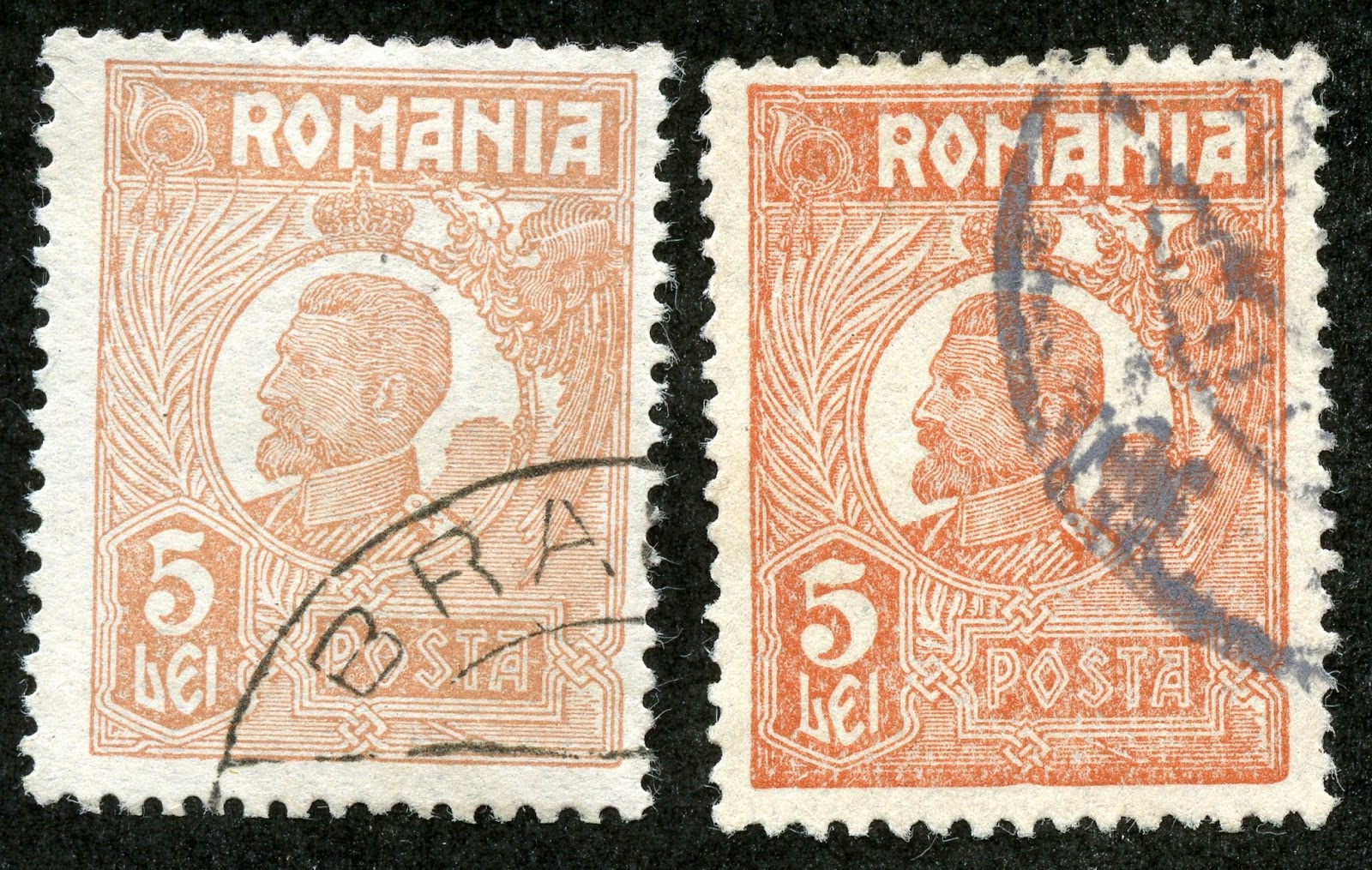 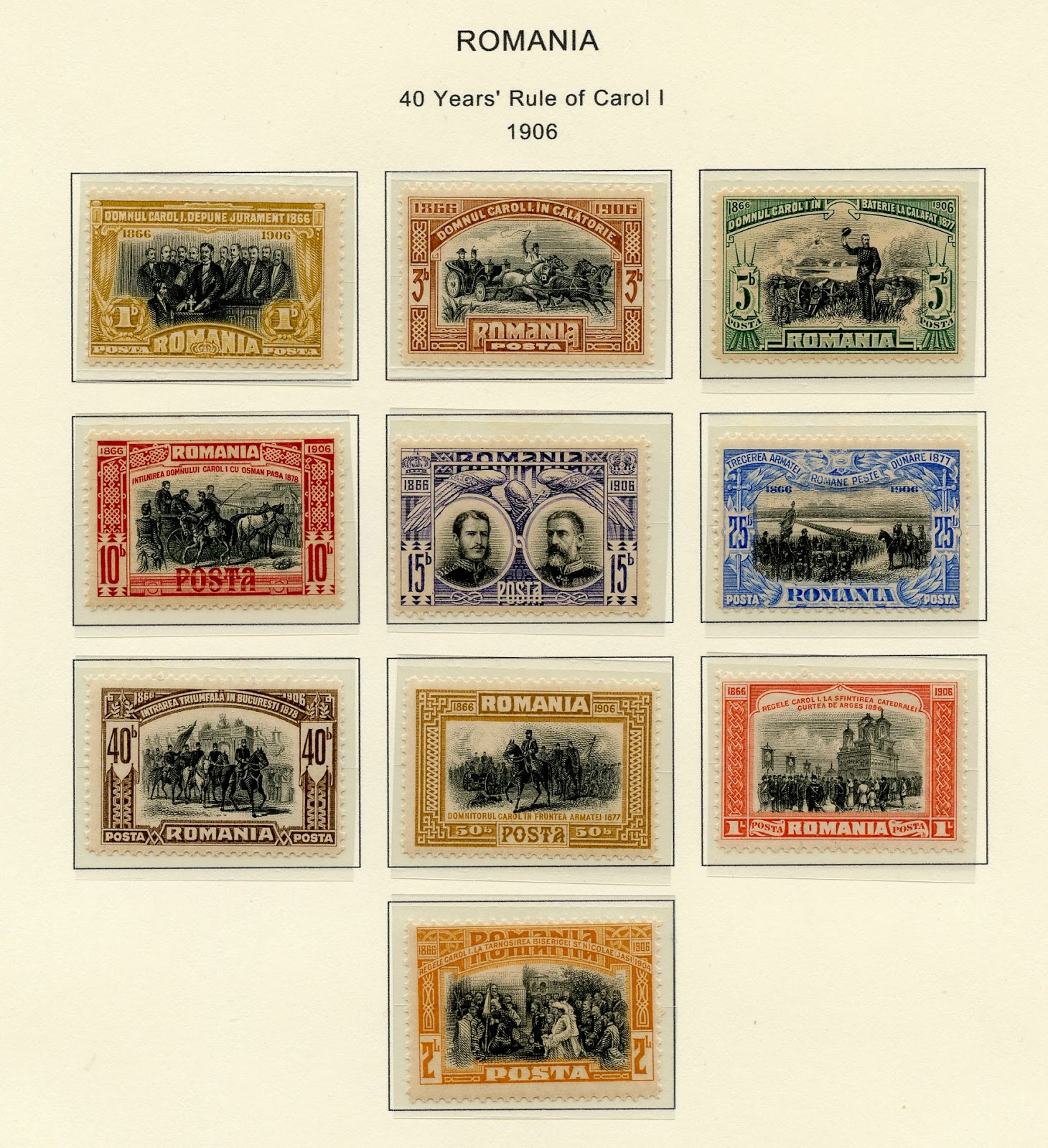 All the major numbers are represented in the Deep Blue (Steiner) album. But there are no spaces for the minor number numeral types found for the 1920-26 (Scott 261-282) issue. And certainly the 1920-22 (Scott 248-260) issue with two paper types, not the least because Scott does not even give them minor numbers, do not have a space. Extra/quadrilled pages may be needed. 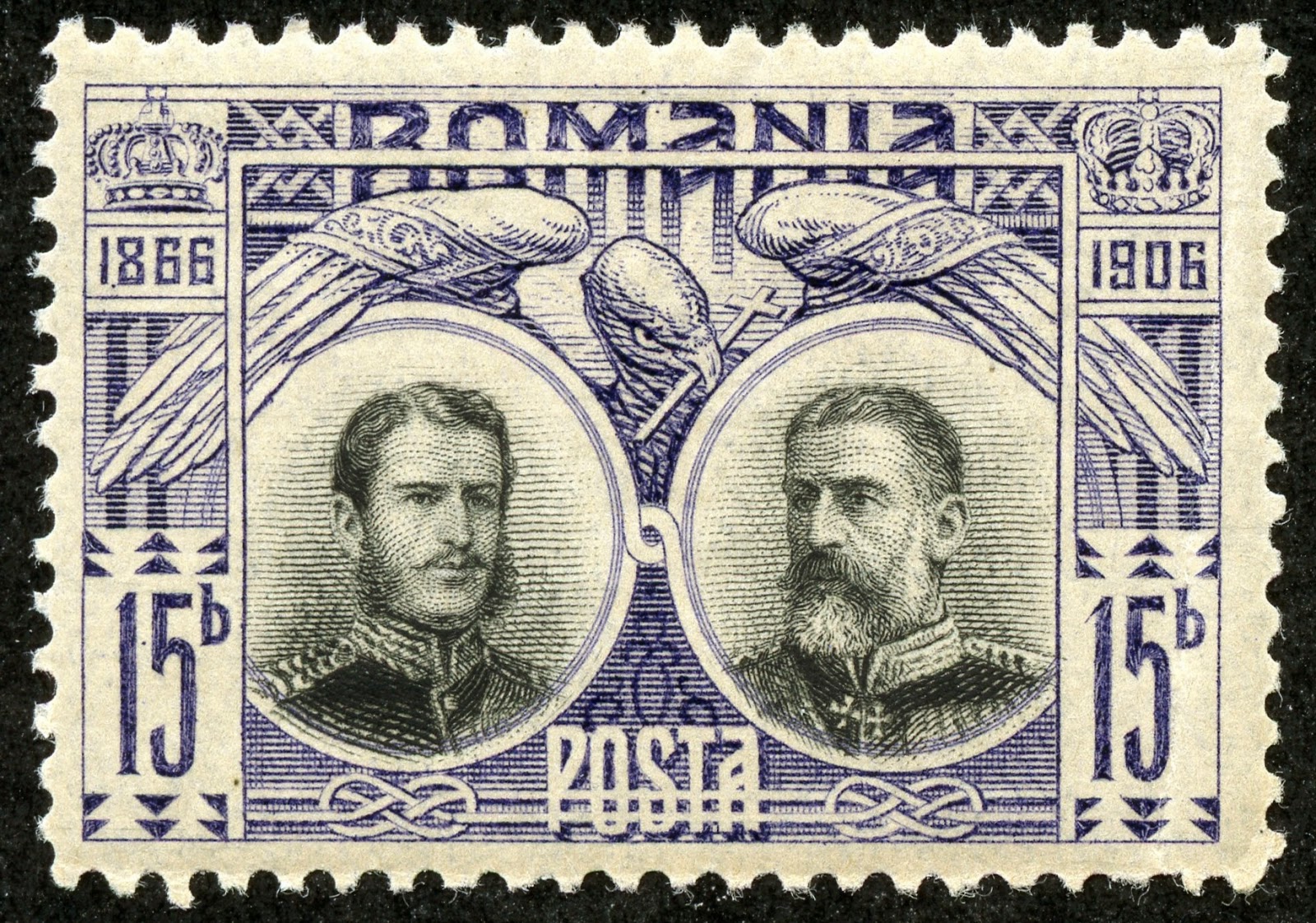 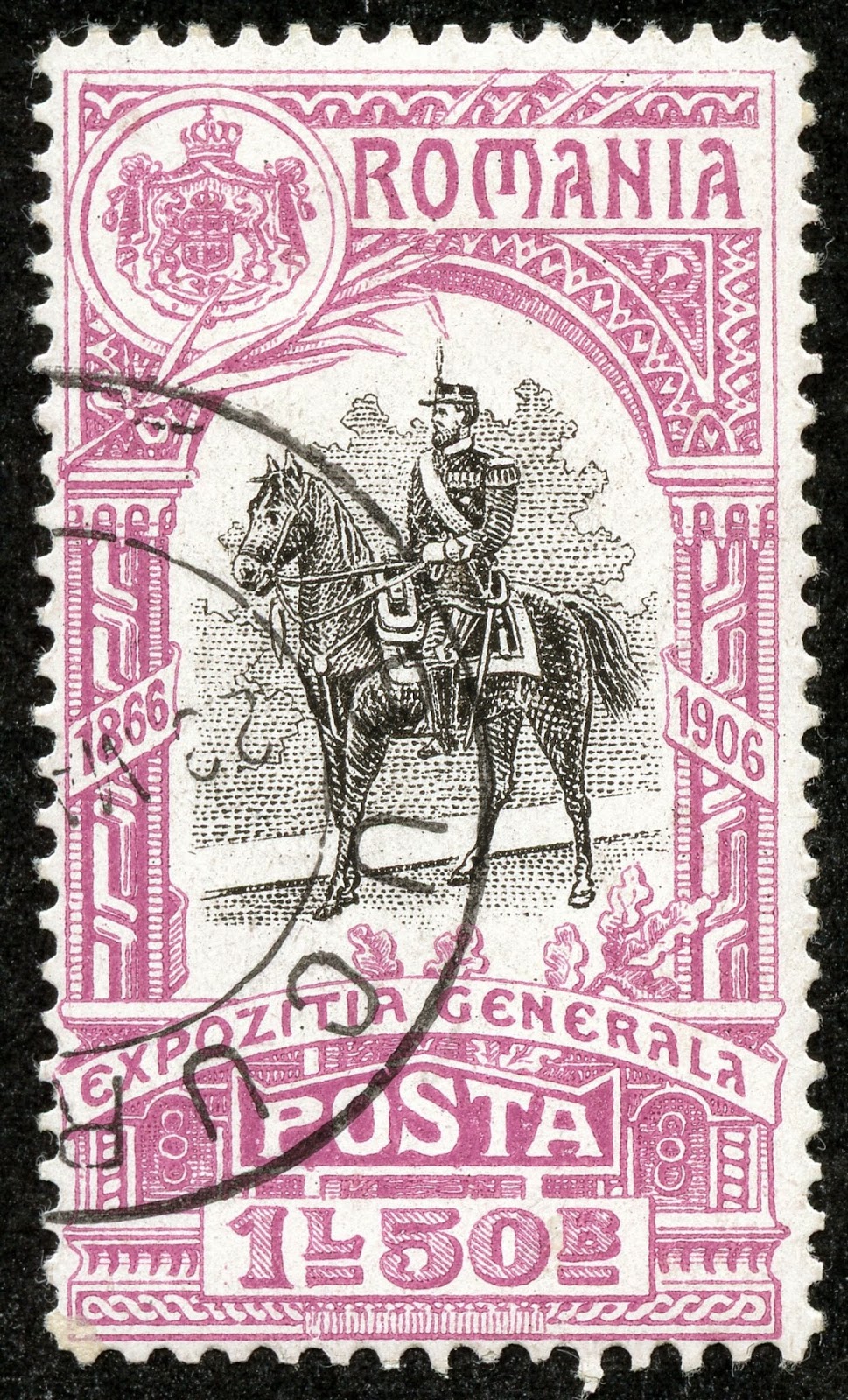 1906 Scott 204 1.50 l red lilac & black brown "King Carol I"
Genuine: Two vertical lines in Shako Plume; Forgery: One thick irregular line
Out of the Blue
I continue to be enamored with Romanian stamps- can you blame me? ;-)

Note: King Carol I pic and maps appear to be in the public domain.