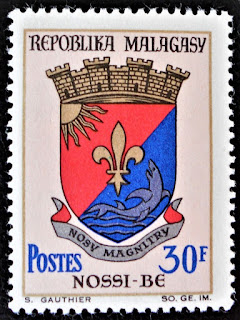 Madagacar #398, multicolored, 1966
Bud's Big Blue
Bud's Observations
“Nossi Be,” in the language of those who live there, means “Big Island.” Never mind that it rates only a tiny dot on most maps, if it gets any notice at all, and that it is dwarfed by its nearby neighbor, Madagascar, a truly big island. Ten Nossi Bes would fit snugly into Rhode Island; over 1842 into Madagascar.

The motto on its coat of arms, “Nosy Magnitry,” proclaims it to be an island of perfumes. Coffee, vanilla, rum, black pepper and cinnamon are produced there, too, and it has become a hot tourist resort despite warnings about traveler safety.

France issued postage for Nossi Be from 1889 through 1894, first using overprinted French Colonies stamps and then the Navigation and Commerce series with “Nossi Be?” inscribed -- a total of 44 regular issues and 17 postage dues. Since 1896, the island has been part of Madagascar. 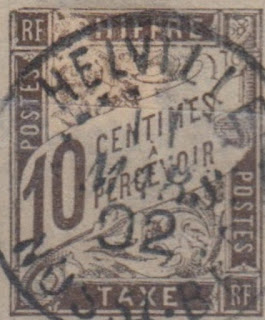 This small number of stamps might be tempting to collect in its entirety were it not for the forgeries. For now, I’ve contented myself with filling Big Blue’s seven spaces. I would like to have an early cancellation form Hell-ville, though. Named for the French Admiral de Hell, Nossi Be’s capital shows up as Helville rather than Hell-ville on cancelled stamps. Was the postmaster too genteel? too prudish? 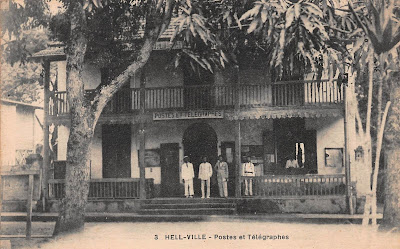 Since I don’t have a Hellville cancel yet, I borrowed the one shown above. I strongly suspect the obliteration is fake since I’ve seen several virtually identical to it on-line. And 1902 is rather late for a cancel on French Colonies #J6.

Jim's Observations
Nossi-Be (Nosy Be, "Big Island" in Malagasy) is an island in the Indian Ocean, five miles off the coast of Madagascar.
It was a French protectorate, and had surcharged/overprinted French Colony stamps issued between 1889-1893, and "Navigation and Commerce" stamps issued in 1894.
The population was 9,000 in 1900, and the Capital was Hell-ville (now Andoany). (The capital was named after a person, not for a region in the netherworld. ;-)
In 1896, the island was put under the administration of Madagascar, and the stamps of Madagascar were hence used.
Nossi Be Blog Post & BB Checklist
Page 1