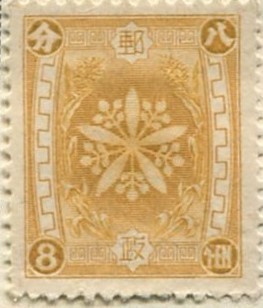 
The internet has made a huge impact on stamp collecting, as all collectors know. But the jolt is felt not only in the marketplace -- the shift from stamp shows to online sales -- but also in how collectors display their treasures -- the shift from albums on shelves to non-commercial websites. Having a virtual collection online, while storing the actual stamps somewhere away from thieves and sticky fingers, has become increasingly popular, to wit, my own Big Blue posts.

The presenters of collections online often add valuable commentary, none more so than Simon Watt for his impressive Manchukuo collection: http://manchukuostamps.com/ (accessed 4/19/2020).

This website is being built and operated as a hobby, instead of mounting the stamps in an album and then writing them up, I thought that I would scan them and do the write-up online. This means I can leave the stamps in the bank but still see my collection whenever I want. It is not yet finished and I doubt that it ever will be....you know what it's like when you collect things!
Of course, his is a highly specialized website. But his observations and examples provide valuable information that generalists will find useful. Here are six of his many insights. (The comments in italics are Simon’s and the stamp scans are mine, except for the cover, which is Simon’s.)

The [first Manchukuo] stamps went on sale on 26th July 1932, and the set contains eighteen values. Looking at the list of postal rates shown separately it is hard to see how some values would have been used, which might mean that the level of pricing had not been agreed at the time of printing.

The ½fen to 10fen stamps depict the White Pagoda. This is a 13 story 70m tower, carved with images of the Buddha and stands in Paita Park in the city of Liao-yang, 64 kilometres South of Mukden. The pagoda is all that remains of the once important Guan Yu temple. The remainder of the issue 13fen to 1Yuan show the Chief Executive of Manchukuo, Puyi, later to become Emperor Kāngdé. In reality Puyi had no power and was completely under the control of the Japanese.
Few countries recognised Manchukuo and it never became part of the Universal Postal Union, fortunately most nations, did deliver the mail from Manchukuo. (One of the few to recognise Manchukuo as a sovereign state was the Vatican, and anyone who looks closely at covers from this area will see that a large number are from Catholic missions). 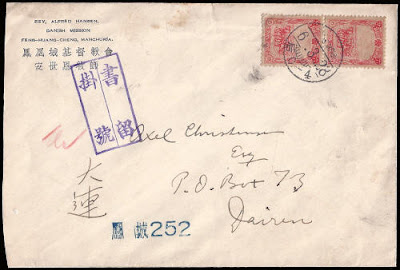 Registered cover sent from the Danish Mission (Lutheran) in 鳳凰城 Feng-Huang-Ch'eng to Dairen on 28th March 1939
In an act of true independence Manchukuo rejected the stamp colour regimes of both the Universal Postal Union and Japan.

1936-37 Scott c1-4
At the end of the war there were 1000's of sheets of stamps in stock and those not subject to Manchurian Local Overprints (MLO's) quickly found their way to the philatelic market. This is the reason why the unused stamps of Manchukuo are mostly inexpensive, and why stamps cancelled, or on covers as a result of genuine postal use are often considered more valuable. 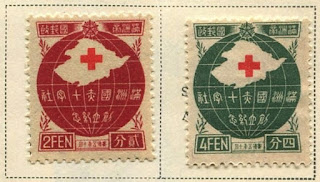 1938 Scott 128-9
Intelligent commentary on specialist websites, of course, is neither new nor surprising. It has been around for many years. But I suspect that generalists do not make enough use of these resources. I had not looked for a Manchukuo specialized site before I started writing this post. I’m glad to have found one.

A common stamp placement error that I find on Manchukuo pages of feeder albums is the confusion of the 1932 series with the almost identical 1934-36 series. The former has five Chinese characters in the top banner while the latter has six.
Census: 79 in BB spaces, 3 tip-ins, 16 on supplement page.

Jim's Observations
Manchuria, located in northeast China and inner Mongolia, was traditionally ruled by the ethnic Manchus: hence the name. But when Imperial Japan seized the lands in 1931, the Han Chinese were, by far, the largest ethnic group, although there was also a stewing pot of Japanese (increasing during the puppet years), Koreans, Mongols, and White Russians. To add some legitimacy to the raw takeover from China, Japan formed a puppet government for Manchukuo ("Manchu State"), and brought back the "last emperor" from the Qing Dynasty, Asin-Giorp Puyi. 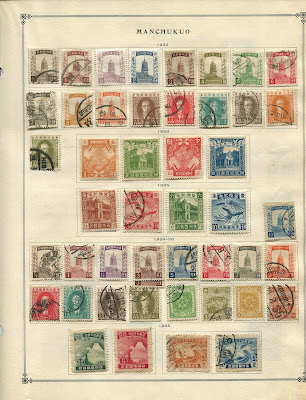 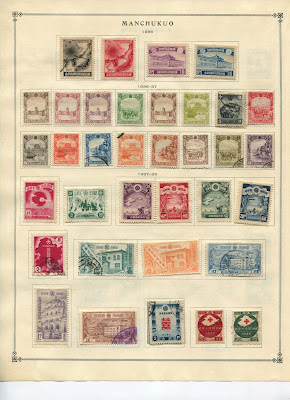 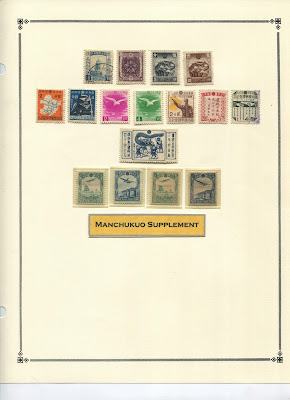