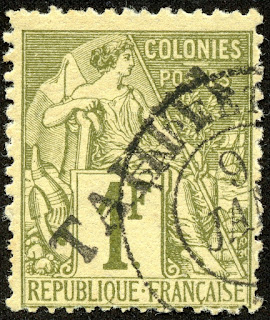 1893 Scott 16 1fr bronze green/straw
Stamps of French Colonies
Handstamped in Black
Quick History
The French Polynesian island of Tahiti, 28 miles (45 km) across, with volcanic Mont Orohena rising 7,370 ft (1,332 m) above the green lush vegetation and the black sand beaches, is located in the central Southern Pacific Ocean within the Society Islands archipelago. Far from the hustle and bustle of ordinary base human civilization, 2,700 miles from Hawaii, 4,900 miles from Chile, 3,500 miles from Australia, Tahiti had evoked for many during the 19th century the romantic noble primitive myth set within an island paradise. 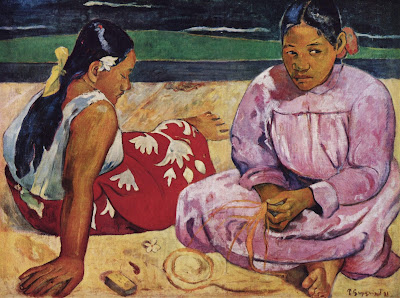 Tahitian Women on the Beach
1891 painting by Paul Gauguin (1848-1903)
Tahiti has been under French influence since 1842, and when the Kingdom of Tahiti, through Pomare V, ceded Tahiti to France in 1880, the island and the island dependencies became a French colony.

Stamps were introduced for Tahiti in 1882 by surcharging stamps of the French Colonies. 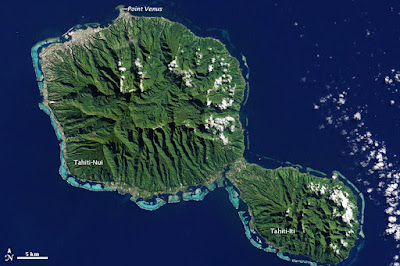 The capital was and is Papeete. 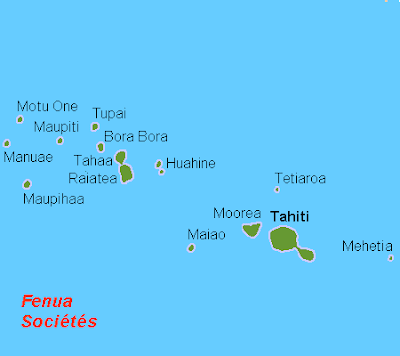 Society Islands, Part of French Polynesia
In 1903, French Oceania (French Polynesia) was formed  from several groups of South Pacific Polynesian islands. The islands included the Marquesas, the Tuamotu Archipelago and Gambier, and the Austral and Bass groupings. The most important group was the Society islands; and above all Tahiti.

For more on this, see the French Oceania (French Polynesia) blog post.

In 1946, French Polynesia and Tahiti became an overseas territory, and French citizenship was granted to all inhabitants. 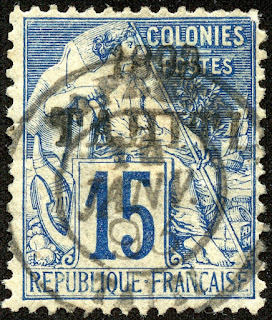 1893 Scott 22 15c blue
Stamps of French Colonies
Overprinted in Black
Into the Deep Blue
The 2014 Scott Classic Specialized 1840-1940 catalogue has, for Tahiti 1882-1915, 65 major descriptive numbers. Of those, three are CV $10+, or 5%. The rest range from $40+-$40,000+ !!! Clearly, Tahiti's stamps are expensive, and the general WW collector will need to be content with a few representative specimens. In addition, Scott has a note about surcharges and overprint counterfeits existing for all the Tahitian stamps. Caveat Emptor.

The very early 1882-84 issues (23 bolded numbers) consist of stamps of the French Colonies crudely surcharged in black. They are CV $ hundreds- $ thousands, and, naturally, I do not have any.

Other categories include the 1915 semipostals (2 stamps), and the 1893 postage due (59 bolded numbers). The postage dues must overall be the most expensive postage dues in the philatelic world as they are CV $ hundreds- $ thousands. !!!!

But I do have some regular issue 1893 "handstamped in black" specimens, so let's begin there and take a look....... 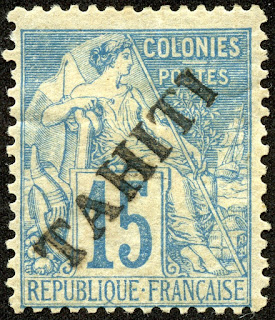 1893 Scott 10 15c blue
Stamps of French Colonies
Handstamped in Black
The first of the 1893 issues consisted of twelve stamps of the French Colonies handstamped in black. The handstamp can slope up (usual), slope down, or horizontal. All are valued the same. CV varies from $40+-$90+ for six stamps. Several CV values are in the $2,000+ to $7,000+ range!

Nine of the stamps are also known with an inverted surcharge. These have minor bolded numbers, and the CV is in the $ hundreds- $ thousands. 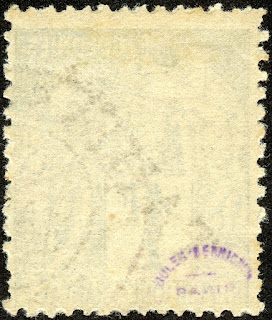 Expert/Dealer Mark
On back of 1893 Scott 16 1fr bronze green/straw
Often, one will find expert or dealer marks on the backs of expensive stamps passing through European channels. (It does not exist in the U.S. as a common practice.)

Here, on the back of the 1893 Scott 16 1fr bronze green/straw (illustrated on the post header) is such a dealer mark. The wonderful "Philatelic Experts" web site lists all the expert/dealer marks that are known- http://www.filatelia.fi/experts/index.html

A little investigation reveals that this is the mark of a Paris dealer, Jules Bernichon. His area, among others, was French Colony stamps. He passed away in 1911. Reassuring, yes? Perhaps, but there is also a note that his mark was forged by "Wondelgem". ;-)

The WW collector, and the specialist, for that matter, finds many stamps valued in the "grey zone" (Here CV $90+), where the price of having a stamp certified as genuine (cost: at least $25) is at the margin of being economically worthwhile. 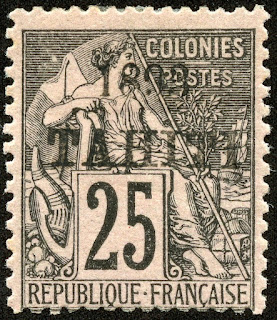 1893 Scott 25 25c black/rose
On Stamps of French Colonies
Overprinted in Black
The second 1893 issue for Tahiti is found on twelve stamps of the French Colonies, and is overprinted in black "1893...TAHITI". Eleven of the stamps are also found with an inverted overprint (italic minor number with a higher CV). 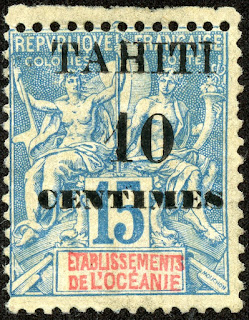 Coincidentally- or perhaps not- this is the same year (1903) when France gathered all of their South Pacific holdings- including Tahiti- into an administrative single colony. 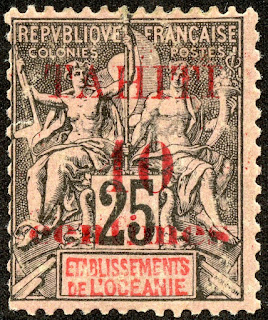 1903 Scott 30 10c on 25c black/rose, Carmine Surcharge
On Stamps of French Polynesia
The overprint for the 1903 issue is carmine or black. 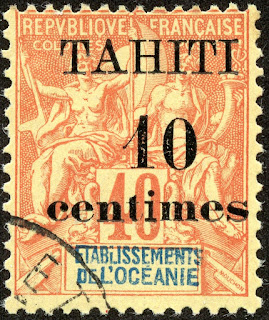 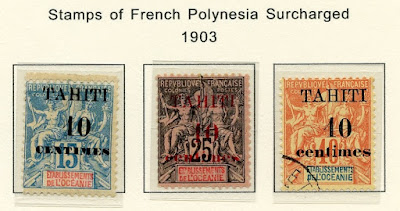 1903 Tahiti Issue in Deep Blue
Stamps of French Polynesia Surcharged
Deep Blue (Steiner) has three pages for the stamps of Tahiti, and has a space for all the major numbers. Steiner does not provide extra spaces for all the bolded minor number surcharge/overprint variations (inverted etc).

Tahiti in Big Blue
Big Blue
Big Blue '69 has three spaces on one line for the stamps of Tahiti. The country coverage is located after "Trinidad and Tobago", and on the same page as "Turks Islands" and the beginning of "Turks and Caicos Islands".

The 40s editions have the same three space coverage. It is located just before "Tripolitania".

Big Blue provides spaces for the 1903 issue, which are stamps of French Polynesia surcharged in black or carmine. They are also the least expensive for Tahiti, but still are CV $10+. 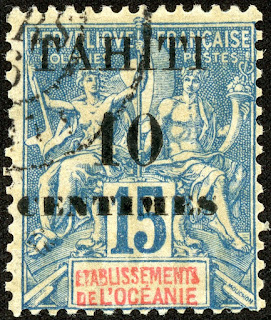 1903 Scott 29 10c on 15c blue, Black Surcharge
On Stamps of French Polynesia
Out of the Blue
I'm happy that Big Blue includes some stamps from Tahiti. Exotic and remote are definite attractions.

Note: Maps and Gauguin painting image appear to be in the public domain.