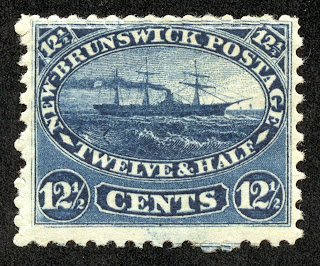 1860 Scott 10 12 1/2c blue "Steam and Sailing Ship"
Quick History
New Brunswick, named for the ancestral home (Braunschweig) of Hanoverian King George III, was given a large population boost by the influx of 14,000 loyalists in 1783, who no longer felt welcome in the newly created United States. Some of my relatives, I believe, were among the group. ;-)  New Brunswick was then partitioned from Nova Scotia in 1784 to form a "Loyalist colony". They were joined by immigrants from Scotland in the early 19th century, and many settlers from Ireland during the 1845 Potato Famine. There were also remaining Acadians from the French Colonial days- the French explorer Jacques Cartier had originally "discovered" the lands in 1534-, but the territory became a British possession after the 1754-63 French and Indian War. The Maritime Provinces and Newfoundland
New Brunswick is considered part of the Maritime provinces, along with Prince Edward  Island and Nova Scotia. It is bounded on the western edge by Maine, and on the south side by the Bay of Fundy coast, with its 50 foot tides. Saint John on the Bay of Fundy was and is the most important port city, but the Capital is Fredericton, 100 miles up the Saint John River, located there originally to forestall an American attack.

Stamps were introduced in 1851 with the very loyal "Crown of Great Britain and Heraldic Flowers of the United Kingdom" design. The New Brunswick issues were short lived, however, with only eleven stamps produced through 1863. Why? New Brunswick was one of the four provinces (others being Ontario, Quebec, Nova Scotia) to enter the Dominion of Canada on July 1, 1867. 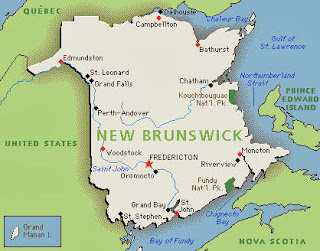 By the way, the new 2014 Scott Classic specialized catalogue has moved all the former stamp issuing provinces of Canada to "Canadian Provinces", rather than scattered alphabetically, as it is, in the 2011 Scott Classic catalogue.

The first 1851 issues, the four "Crown and Heraldic Flowers" design stamps, is similar to the 1857 Newfoundland issue stamp- which I have, and will show for the Newfoundland post. But I don't have any of the New Brunswick to illustrate, as the CV is $500+-$7000+.  !

The next stamp's back story is amusing indeed. Charles Connell was the Postmaster General, and he decided to put his own portrait on a stamp rather than Queen Victoria. The 1860 Scott 5 5c brown was prepared, but never issued, as the governor put a stop to it, and most of the stamps were burned. And he had to resign as postmaster. 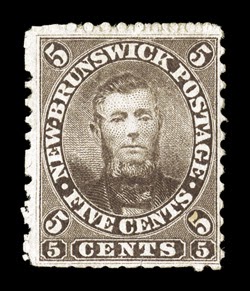 But is there a bit of hypocrisy on Scott's part here? The "Charles Connell" stamp was never put into postal use, but has full catalogue status. Readers, what do you think? 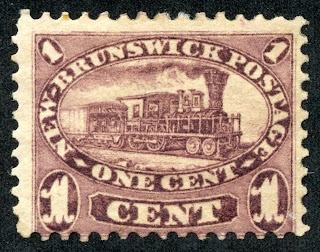 1860 Scott 1 1c red lilac "Locomotive"
The very first portrait of a locomotive on a stamp is this one issued in 1860- the famous U.S. 3c ultramarine came out in 1869. This stamp was the lowest denomination in a six stamp issue produced by the American Bank Note Company. 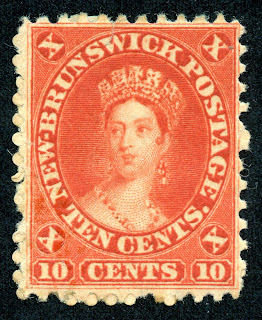 1860 Scott 9 10c vermilion "Victoria"
Perhaps to make up for the "Charles Connell" debacle, three stamps of the six stamp issue feature the Queen. All show the young queen with the same general portrait: but, to me, each portrait looks slightly different also. Since all three stamps are illustrated on this blog post, one can judge for oneself. 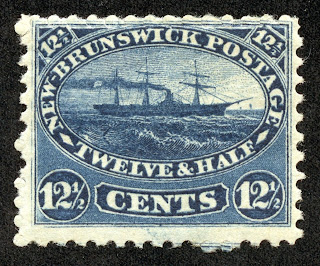 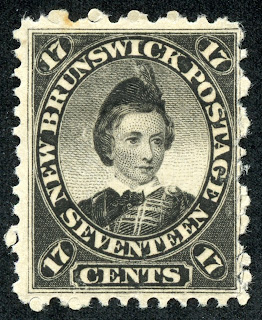 Deep Blue
The Deep Blue (Steiner) has one page for the New Brunswick issues, and no minor number color stamps are given a space. But all the major numbers indeed have a space. 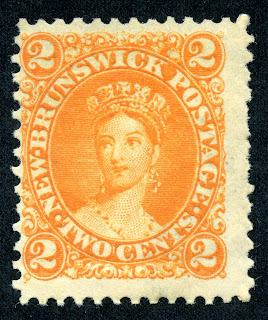 1863 Scott 7 2c orange "Victoria"
Big Blue
Big Blue '69, has New Brunswick on the same page as Nevis, and is placed after Nauru, and before Nepal.

The entire six stamp 1860-63 issue is given a space- the good news for this gorgeous issue.

The bad news, for the price aware collector, is the entire selection crosses the threshold for "expensive" stamps. And four stamps meet the $35 criteria for "Most Expensive" stamps, with a CV ranging from $37+-$77+. !

But, since I have a particular like for these stamps, I, for one, am pleased. ;-) 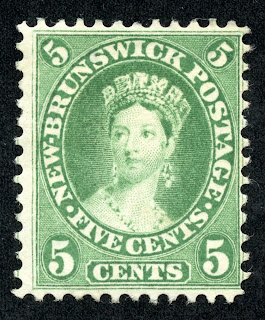 1860 Scott 8 5c yellow green "Victoria"
Out of the Blue
Classic issues from early New Brunswick- and a scandal- what's not to like?  ;-)

Note: Maps and "Charles Connell" stamp image appear to be in the public domain.

Note: Astute readers may have noticed that I seemed to have skipped over "New Britain" in the catalogue.  "New Britain" was part of former German New Guinea, and captured by Australian troops during WW I. The Scott has some 50 major descriptions between the years 1914-1915. The stamps consist of a "G.R.I." overprint and surcharge on the stamps of German New Guinea and the Marshall islands (whose stamps were used in this territory).

This was done deliberately for several reasons....
• Big Blue, the Scott Part I International album, has never provided spaces for this entity.
• The CV for these stamps is high and very high. And one has to worry about overprint forgeries. This is specialist territory.
• I was unable to obtain any examples, although, admittedly, I did not try very hard, ;-)