The defiant and defying message of Karelia’s stamps is clear: Beware of belligerent bears brandishing billhooks.

The Finnish nationalists of East Karelia spat this warning at the Soviets with whom, briefly in 1922, they were at war. Their separatist hopes were dashed after only a few weeks, but that was long enough to draw up a coat of arms (above) and issue stamps -- both hollow claims, as it turned out, to national identity and stability (for more of this history, click here). Wars seldom annihilate hope, though. The same angry bruin appears on a 1943 Finnish semi-postal stamp. Even now, nearly a hundred years later, many Karelian refugees still cherish the belligerent bear. Moreover, efforts to rehabilitate bear populations in Karelia are currently underway.

The bear on the stamp has broken the chain of Soviet oppression and, in its paws, wields the Karelian national chopper, a vesuri, elsewhere known as a billhook or machete. Normally a tool for clearing brush, it serves nicely as a brutal weapon. The jagged lines at the top of the stamps, usually thought to represent northern lights, look to me more like gnashing bear teeth. 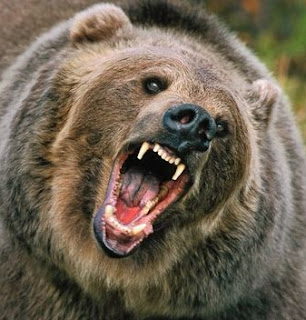 The design shows the national coat of arms of the newly minted state of Karelia. An enraged bear is pictured, having just broken his chains, holding a blade called a billhook over his head, ready for any action.

Actually, the bear looks rather comical, and has been described by Varro Tyler and others as a "Dancing Bear, standing on a bicycle chain, swinging a golf club over his head". ;-)

The northern lights are represented by four zigzag lines over the bear.

The short history of Karelia is fascinating, and is discussed in my original post (link below).

Of more importance to WW collectors is how to distinguish the forgeries from the originals. That topic is looked at in my original post (link below).