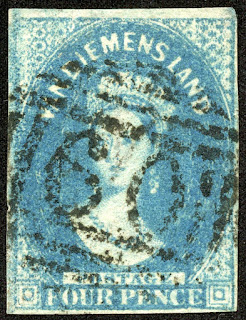 1857 Scott 13 4p pale blue "Victoria"
Wmk 75 "Double Lined Numeral"
Quick History
Tasmania, an island just off south-eastern Australia, was one of the six British colonies that merged to form the Commonwealth of Australia in 1901.

But Tasmania, as the other Australian colonies, has a prior rich philatelic history, with stamp issues from 1853-1912.

In 1812, British convicts were sent to the island as a "prison without walls".

The first settlements include Hobart Town, Launceston, and George Town. 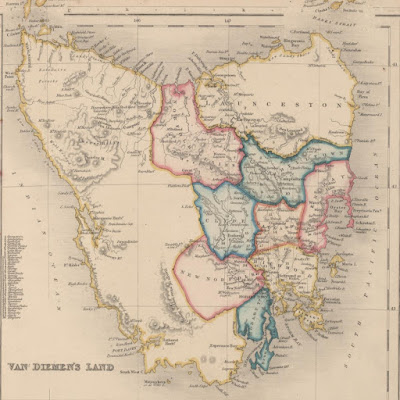 The engraved Chalon Heads (portrait by Edward Chalon 1838) were issued in 1855, and used for the next 25 years. They are the "meat and potatoes" of Tasmania specialty stamp collecting: I count some 132 major/minor varieties in the Scott catalogue. They are also generally expensive for the WW collector, and, except for a representative collection, may need to be left alone. 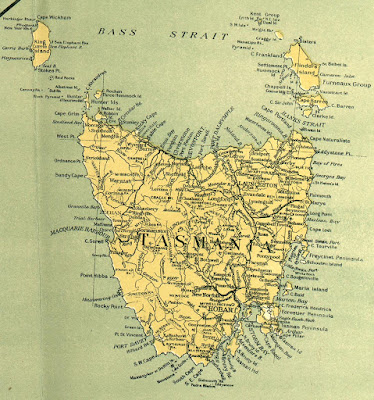 Van Diemen's Land was changed to Tasmania in 1856, which appears on the Chalon Heads in 1858.

The typographic "Sidefaces" appeared in 1870, and are similar in design to those from Nova Scotia.

They were issued through 1891, and offer different watermarks (five), perforations and shades. The 28 major Scott numbers for the "Sidefaces" are generally not as expensive CV- wise as the preceding Chalon Heads.

The "Pictorials"- scenes around Tasmania- were issued between 1899-1912. They were produced by engraving, lithography, and typography, and have different watermarks (three), shades, and perforations.

The "Roo" stamps for Australia were not issued until 1913, even though Tasmania and the other Commonwealth states had joined together in 1901. Consequently, Tasmanian stamps were used until as late as 1914. 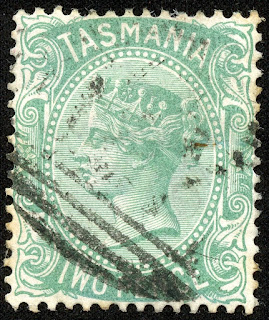 1878 Scott 61 2p deep green
Wmk 77 "TAS"
Into the Deep Blue
The 2014 Scott Classic 1840-1940 catalogue has, for Tasmania 1853-1912, 123 major number descriptions. There are also many minor numbers because of perforation changes and color shade variations. For the major number count, I did not include the 35 "AR" postal fiscal stamps stamps in the catalogue.

Of the major number count, only 5 (4%) can be found @ CV $1+. Raising the bar to CV $10, yields 35 stamps, or 28%. Clearly, the early classical era Tasmania issues are somewhat expensive for the WW collector who wishes to obtain a representative collection. The very early 1853-1868 issues (50 major numbers) are expensive ( $27-$60+) to very expensive ($ Hundreds- $ Thousands). But those early listings are specialty territory anyway.

Be aware that some eleven different watermarks were used, and there can be many different perforation varieties. All in all, a pretty complicated and expensive country. ;-) 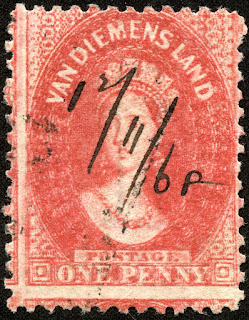 1864 Scott 29 1p carmine "Victoria"
The Chalon Heads were issued between 1855-1868, and there are some 49 major Scott numbers. They can be found especially with multiple perforation and roulettes, as well as imperforate.

The Chalon Heads are specialty territory.

Pen cancels (as above), are valued at a lesser CV. 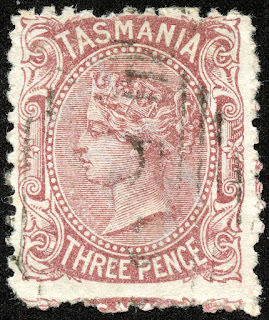 Tasmania has many different watermarks- I count eleven. 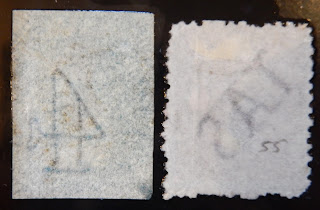 Wmk 75 Double Lined Numeral; Wmk 76-Barred TAS
The "Barred TAS" is distinguished by the lines connecting the "TAS" letters above and below.

The Double Lined Numeral watermark can be found on the Chalon Heads. 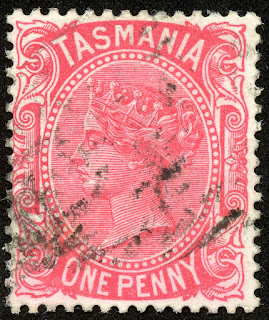 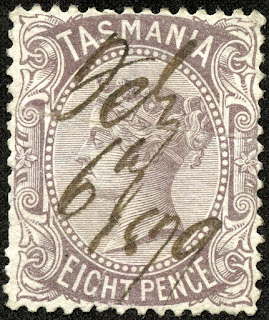 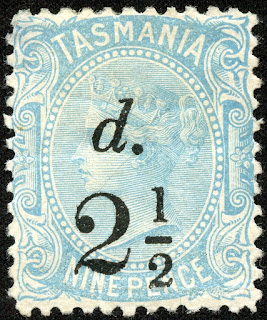 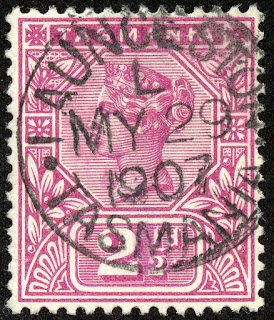 Note the town cancellation of Launceston. 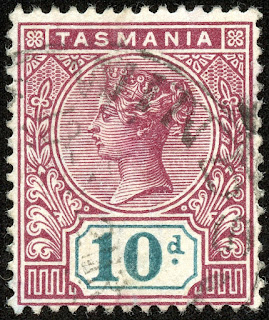 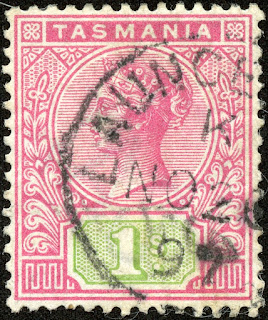 1892 Scott 81 1sh rose & green "Victoria"
Note another town cancellation for Launceston. It was and is the second largest city in Tasmania next to Hobart. 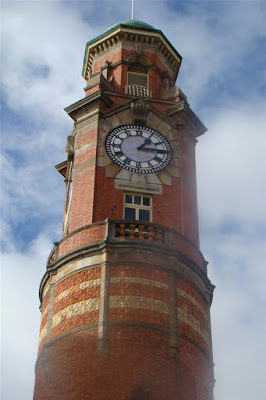 Clock Tower Post Office Building
The Post Office building in Launceston is topped by a Clock Tower.. This landmark was completed in 1910. 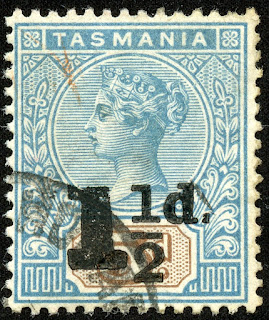 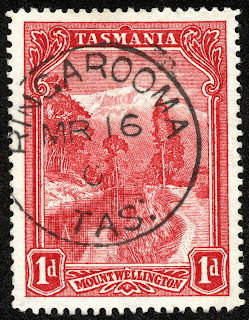 The watermark on the paper was Wmk 78 "Multiple TAS". Perforation is 14.

The "Mount Wellington" 1p stamp was based on a painting by Australian artist Haughton Forrest.

Rincarooma is a small town in north-eastern Tasmania. 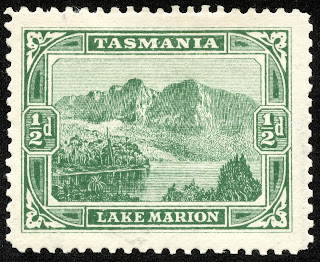 The paper watermark is Wmk 70 "V and Crown" 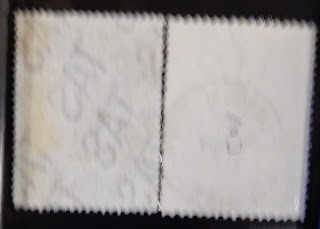 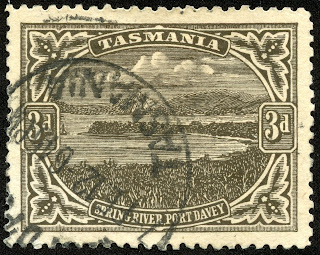 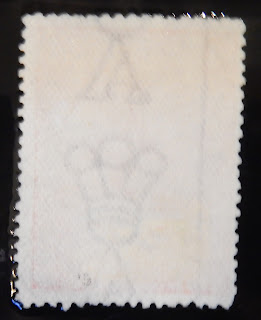 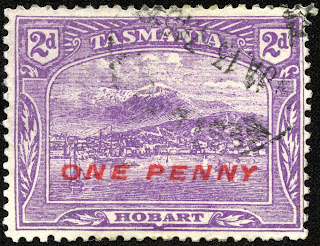 1892-99 Issue in Deep Blue
Deep Blue (Steiner) has nine pages for the stamps of Tasmania, and, for the most part, has spaces for all the major varieties. I did find some half dozen instances where bolded minor numbers or bolded suffix major numbers were not given a space. I did set up a quadrilled page for those. Chances are, I have nothing to worry about, as these stamps are expensive (hundreds-thousands). !!

If one is collecting the numerous minor number shade colors, or minor number perforation changes, Steiner will need to be expanded significantly. 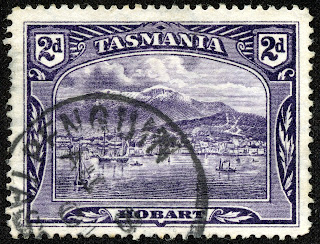 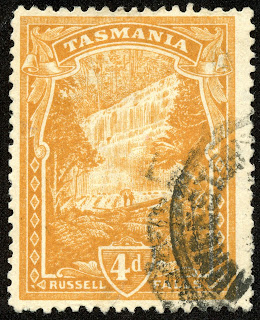 1905-08 Scott 106 4p ocher "Russell Falls"
Typography; Wmk 13 "Crown & Double-lined A"
Out of the Blue
At one point in my collecting years, I was interested in specializing in the Australian States. I never followed through with that intent, but I still see the attraction and the logic for such an interest.

Note: Maps and Launceston Clock Tower pic appear to be in the public domain.