Scott #s 137, 129, and 145, blue
Vasco da Gama at sea, Mozambique overprint
Bud's Big Blue
Bud's Observations
There’s a story about a cat that tried to swallow an ostrich instead of a canary. I won’t retell it here for it doesn’t end well for the cat or the ostrich. Portugal and Mozambique might provide a fitting illustration for that story, though. Portugal (the colonizing cat) consists of a mere 35,603 square miles, while Mozambique (the ostrich colony) spreads over 309,496 squares. The cat, over several centuries, found that catching the ostrich was easier than making a meal of it.

That is to say, from the time Vasco da Gama landed on Mozambique Island (1498) until the late 19th century, Portugal actually controlled very little of what is now Mozambique, except for a few costal settlements. The sails on da Gama ships emblazed with a cross (see above) where probably not unfurled as he approached the Island. He had decided to pretend to be a Muslim so as not to offend the locals. They found him out and forced him to leave. The cat’s troubles start there.

Early traders and prospectors did venture into the interior searching for gold, but various native military and raiding groups, many coming from the Zulu Kingdom, prevented Portuguese cat from fully exploiting the region. Livestock, hostages, and wares intended for trade were seized, thereby disrupting efforts to extract wealth and weakening feline colonial authority. Moreover, other European powers set up aggravating outposts along the coastline
In the late 1800s, the Portuguese cat decided it needed better strategies for extracting wealth from Mozambique. Even as alliances with various chiefdoms and sheikdoms began to yield some success, Portugal still had little hope of exploiting the entire region on its own, so it adopted two catlike schemes; coincidentally, both schemes generated many stamps for collectors.

The first strategy established provincial governments in areas where Portugal had some reasonable hope of consolidating control. These include, in addition to Mozambique Colony which is the topic of this post, the provinces of Lourenco Marques and Inhambane; both have their own Big Blue pages.

A Portuguese rough riding cat named Joaquim Augusto Mouzinho de Albuquerque was instrumental in “pacifying” some Mozambiquan provincial areas; he then became a governor of Gaza, a province that did not have its own stamps. Eventually Mouzinho de Albuquerque committed suicide, although some say he was murdered. He remains a hero in Portugal. 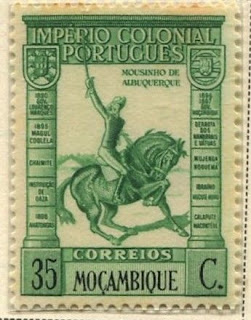 Scott #276, the rough riding cat
Mozambique issued a series of charity stamps (1930-31) commemorating Mouzinho de Albuquerque triumphs. Inscribed at the bottom are the names of Gaza towns and villages that he brought under cat control.

While stamps were issued in the 1890s for some but not all provinces, the Mozambique Colony stamps were distributed throughout the provinces. Use of these stamps during the early and mid-1890s is symbolic of colonial bureaucrats’ and settlers’ gaining domination. The cat seems to be winning. 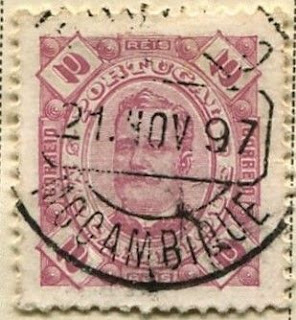 Where hope of Portuguese control was dubious, chartered companies were authorized to exploit the land and people -- the Mozambique Company, Niassa Company, and Zambezia Company (including Quelimane and Tete). Beginning in the 1890s, each of these companies had their own stamps, first Portuguese issues inscribed with their names, then stamps issued by the companies themselves. These stamps, to be discussed according to their respective Big Blue locations, are symbolic of foreign company shareholders’ growing clout.

Instead of grouping all of Mozambique’s stamps in one place under a single heading, the Big Blue’s editors spread them throughout the album alphabetically by province or company name, giving the false impression that they were issued by independent nations. 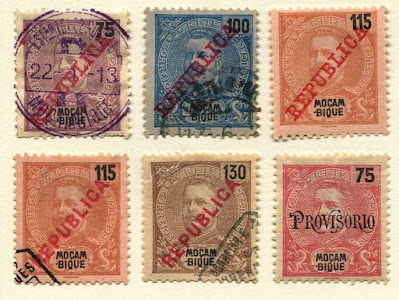 The “Republica” and “Provisorio” overprints denote political changes in Portugal. The cat had, in addition to difficulties with its colonies, troubles back home. The Republic began following the October 5, 1910 revolution, thereby ending the Portuguese constitutional monarchy. The Republic lasted only 16 years; a coup d’état squelched it in 1926. Mozambique stamps of the classical era show more evidence of the upheavals in Portugal than in Mozambique.

Did the cat ever consume the ostrich? Well, during the years covered by the stamps on BB pages (all showing below), it did make a start on its exploitive repast -- the ostrich (both African people and land) suffered. But full control (consumption) was never achieved. An extended war for independence began in 1964. After ten years, the cat went home, tail dragging. 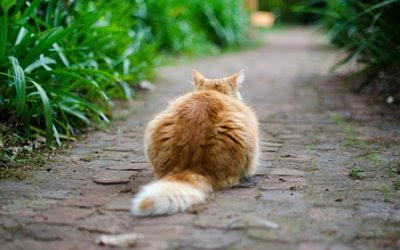 Even when formal independence was finally achieved (1975), matters remained unsettled. The ostrich suffered yet another debilitating war (1977 to 1992) before the current democratic era emerged. As a result of these protracted conflicts, Mozambique was not declared free of land mines until 2015. Even today, the long-suffering ostrich is crippled by extensive poverty, corruption, smuggling, pollution, and loss of natural habitat -- problems traceable to years under the cat’s paws. 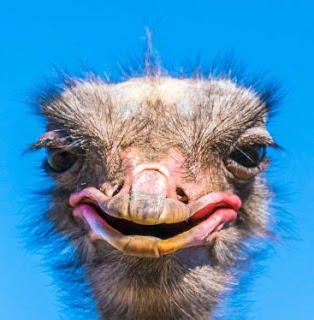 Jim's Observations
Considering how "exotic" Mozambique appears and appeals to me, it would be easy to lament the Portuguese designs- reflecting none of the land, animals, or people of the colony. ( A hint of what could have been done will be demonstrated by the soon to be published post - Mozambique Company.)But with the many local surcharges, they are still interesting stamps to collect.
Mozambique Blog Post & BB Checklist
Page 1 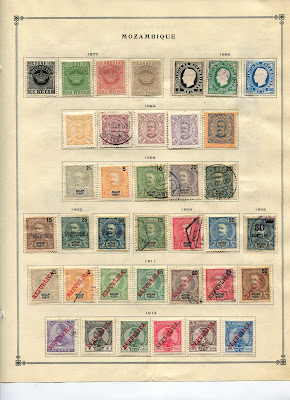 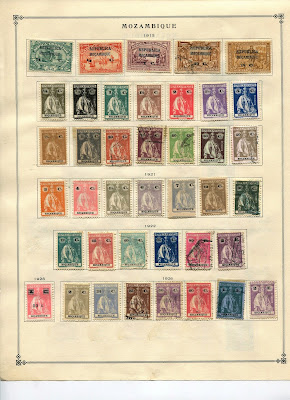 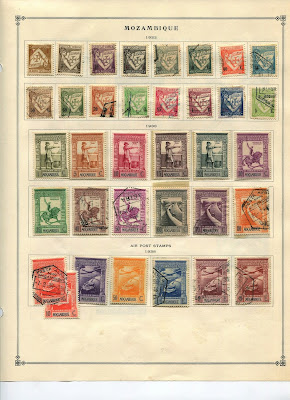 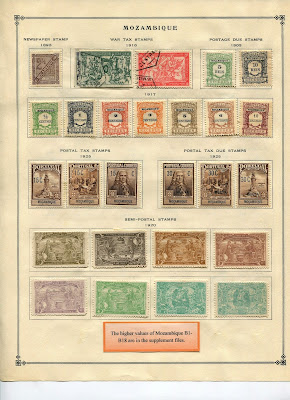 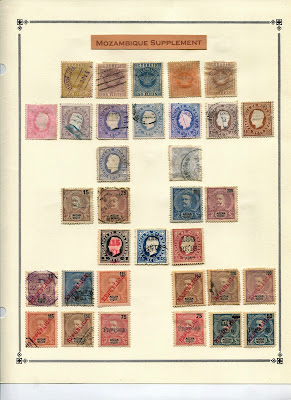 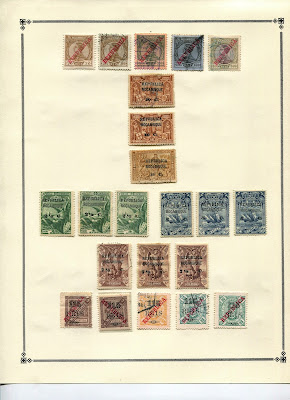 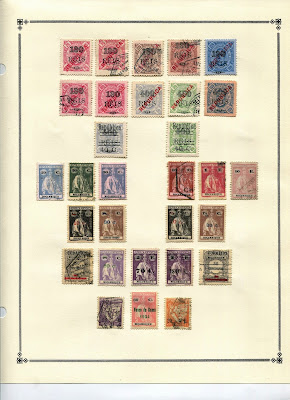 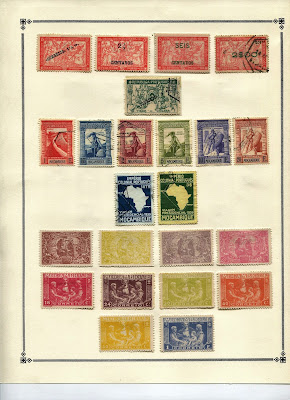 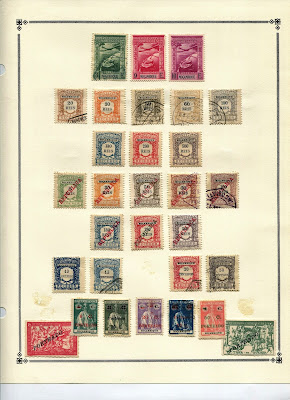 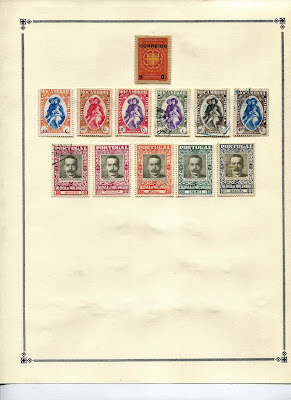