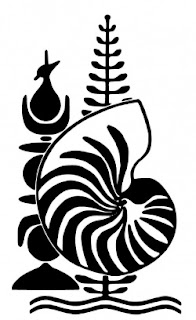 A recent New Caledonia emblem
Bud's Big Blue
Bud's Observations
I’ve commented in several Bud’s Big Blue posts that large numbers of overprinted stamps usually indicates that some form of social upheaval bedevils the country. New Caledonia is no exception to this rule. In the nineteen years following New Caledonia’s first stamps with identifying initials (1881-1900), thirteen different overprints were used. And there are many double surcharges, errors and anomalies. New Caledonia was the first colony to have its initials overprinted on French Colonies stamps 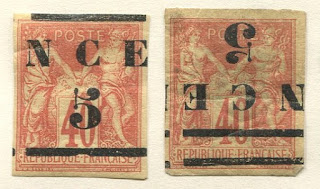 Fortunately, an excellent resource for identifying early New Caledonia surcharges can be found at https://www.rfrajola.com/NCE/nce.pdf.  At this site, Richard Frajola has published the Frederick Mayer collection of pre-1900 New Caledonia stamps. These overprints commonly turn up in feeder albums, so most world-wide collectors have at least few of them. My assortment is showing at the beginning of the supplement pages (below). 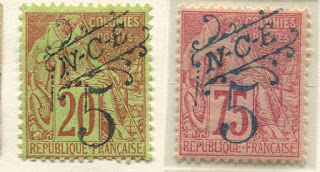 No doubt the main reason for the deluge of overprints was slow delivery of stamps from France. But social turmoil may also have contributed to the necessity for overprints -- New Caledonia was a prison colony for French convicts and political dissidents, indigenous people were largely excluded from the French economy and restricted to reservations, French ranchers’ cattle ate locals’ vegetable gardens, violence erupted, and European diseases decimated the native population. Collectors might wonder if their early New Caledonia stamps franked a prisoner’s mail to France.

From 1859 through 1881, New Caledonia used French Colonies stamps without overprints, as was the case in other colonies. Stamps cancelled in New Caledonia, however, can sometimes be identified by a distinctive dot matrix lozenge authorized for Nouméa, New Caledonia’s capital and largest city. Scott’s catalog numbers these with an “A” prefix. I located my collection of Nouméa cancels in Big Blue’s French Colonies pages rather than with the New Caledonia supplements. Here are four examples; the first three show the dot matrix while the fourth has a standard circular cancel

Scott’s Catalog makes an exception for the first New Caledonia stamp -- it’s an 1859 local issue rather than an officially authorized stamp. Apparently, it was in use only a short while, then, when the French Colonies stamps became available, it was discontinued. According to comments in the Mayer collection (cited above), it was carved by a Colonial French Marine sergeant on a stone plate of 50 stamps, each being separately drawn. Since each of the 50 originals is different, forgeries, which abound, are difficult to detect. These local stamps were intended for service between Nouméa and Canala, an outlying town. A total of 1500 stamps were printed. Of the two in my collection, the first may be authentic while the second is an exceptionally crude imitation. The image is meant to be Napoleon III. 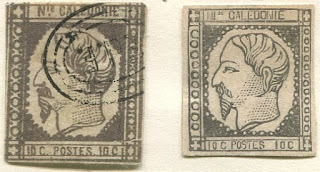 #1s? Maybe/Unlikely.
After 1920, New Caledonia, like most French colonies, was issued stamps of distinctive design. The acclaimed artist André Delzers engraved many of these, but they lack the inspiration, nuances, and details of the stamps he designed for France. Compare, for instance, these four, all by Delzers:

NC #s 152 and 169, France #s 332 and B100
The emblem at the top of this post employs some New Caledonia symbols that classical era stamps largely avoided -- the nautilus shell, a Kanak spear or flèche faîtière (often used to decorate roofs of chiefs’ houses), and a tall native pine tree. These had to wait until the 1950s for their philatelic debut. A flèche faîtière appears on a 2007 New Caledonia stamp.

Jim's Observations
Wow, I learn something from Bud's observations every time!
New Caledonia, 750 miles east of Australia in the southwest Pacific Ocean, has been a formal possession of France since 1853. But, it was named by the British Captain James Cook in 1774, as the land reminded him of Scotland. The indigenous population was the Kanak society, which is clan and chief based, and had the fearsome reputation of eating their enemies in former years.The French established a penal colony, where some 22,000 prisoners were sent through 1897. Nickel was discovered in 1864, and New Caledonia has today 25% of the known nickel resources in the world.
Stamps were introduced in 1859 with a portrait of Napoleon III. One will note the stamps often are inscribed "Nouvelle Caledonie et Dependances". The Dependencies are the Loyalty Islands, Isle of Pines, Huon Islands, and Chesterfield Islands.
New Caledonia Blog Post & BB Checklist
Page 1 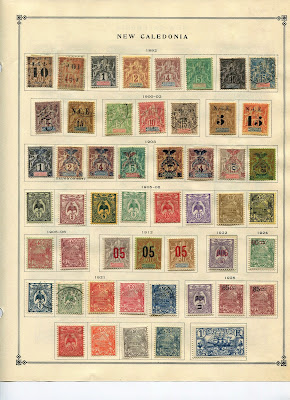 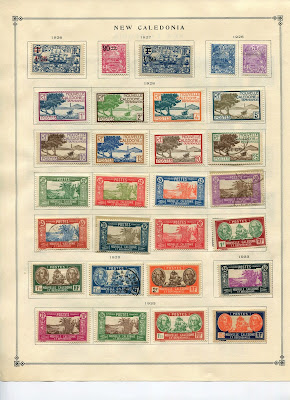 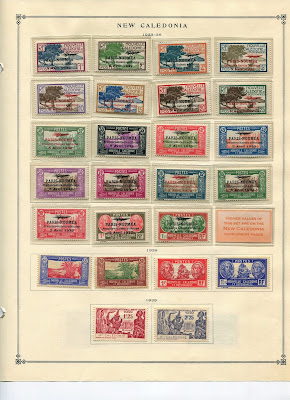 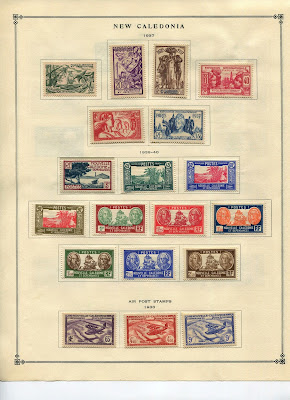 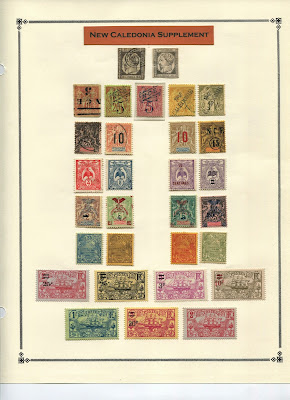 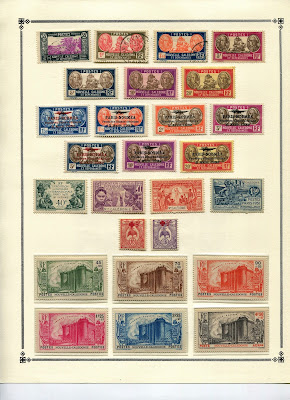 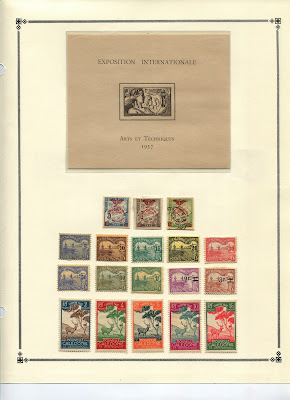 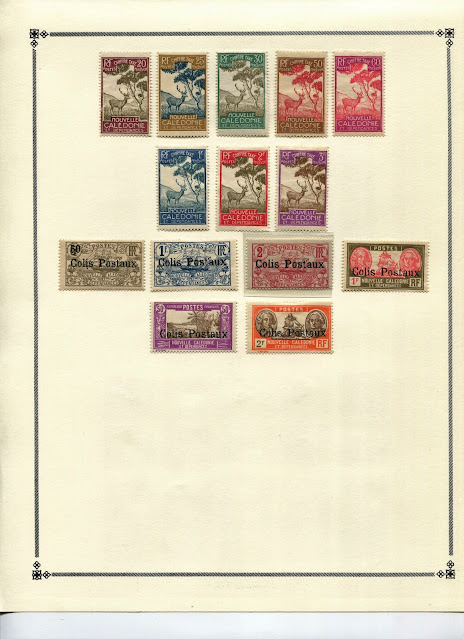 Comments appreciated!
Page
Posted by Jim at 7:00 AM