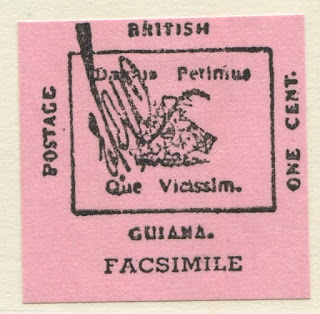 An owner of a complete British Guiana collection has much to boast: not only the first adhesive stamps issued in British America, but also the rarest and most expensive stamp in the world, the magenta 1c #13 (see fake above).

Only a few years ago every kid with a stamp album knew about #13. The alluring possibility, however remote, that rummaging in grandma’s attic would turn up another #13 fueled philatelic avarice for generations. “You might find one!” the advertisements proclaimed or implied.

But, of course, all the grandmas’ attics yielded nothing but a wild goose chases. Even had another #13 been found, it no longer would be the rarest stamp in the world. Now, the only surviving #13, in ill health after years of neglect in a Philadelphia bank vault, has a new owner (not me). Sadly, it’s ship and motto are barely discernible.

The ship/motto theme carried forward on all stamps until 1927, except for the 1898 series commemorating Victoria’s ascension to the throne (the defective 1c shown below has been replaced).

The motto, Damus Petimusque Vicissim, translates as "we give and take in return". Hear these words spoken with a British accent, not Guianese. An expression of colonial capitalism, their meaning in the best sense is exchange, trade, swap, barter, reciprocation, or quid pro quo. Plantation-produced sugar was principally what the British wanted from the bargain. However, the Guyanese -- slave, free, and freed slave -- were never given a fair share. Too much taking, too little giving. Profits sailed away on ships like those shown on most pre-1931 stamps.

Usually cancels are generic or from Georgetown, the capital and major city. Bartica, a town on the left bank of the Essequibo river (1910 cancel on supplement page, bottom left), continues to be a launching point for gold and diamond prospecting. Population in 1910 was likely less than 3,000.

Jim's Observations
As a child with a stamp collection, who doesn't remember the image of the 1856 British Guiana 1c magenta, the "world's most famous stamp"?

Imperforate with a sailing ship design, with the Latin inscription "Damus Petimus Que Vicissim" (We give and expect in return), one only needed to check the attic for similar treasures. Enticed by this vision of fabulous riches, one was then encouraged to send away for "approvals".

Do you remember which Stamp company offered that? 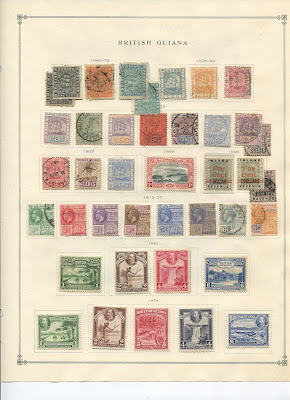 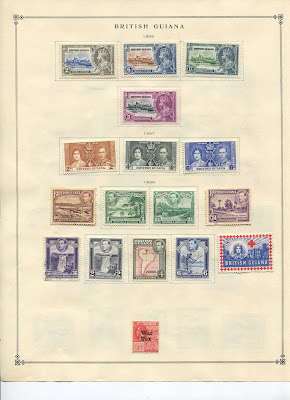 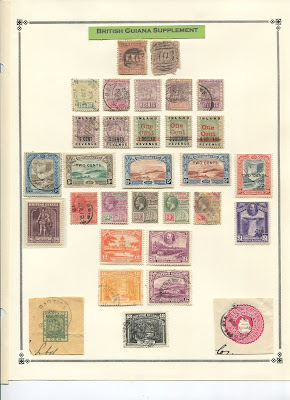