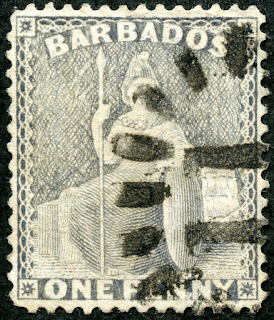 1875 Scott 51b 1p gray blue "Britannia"
Into the Deep Blue
The original blog post and BB checklist for Barbados is here.

The purpose of this post (and the next) is to take a more in depth look at the classical era Barbados issues. 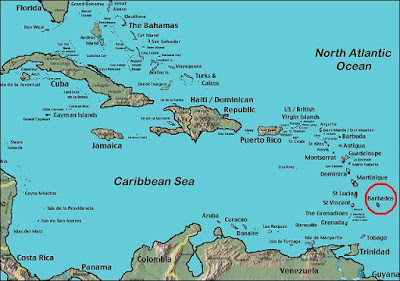 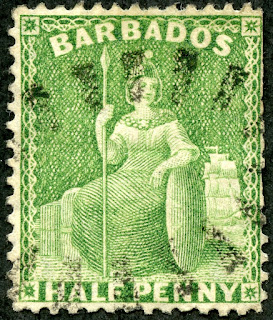 1876 Scott 50 1/2p yellow green "Britannia"
Wmk 1
Unlike other colonies, Barbados did not use British stamps at any time. The colonial authorities took over the internal postal responsibilities in 1851, while the British continued to operate the Mail Packet Agency at Bridgetown until 1858 for mail overseas.

The "Britannia" general design for Barbados was shared by Mauritius and Trinidad. The design was based on a Henry Corbould watercolor. Corbould was also responsible for the sketch of Queen Victoria from which the penny black was derived.

The "Britannia" issues can be found with blued paper, white paper, multiple shades,various perfs, and watermarked/unwatermarked. Clearly, these issues, because of complexity and expense, tend to be the province of the specialist.

After 1874, De La Rue printed further stamps from the plates. 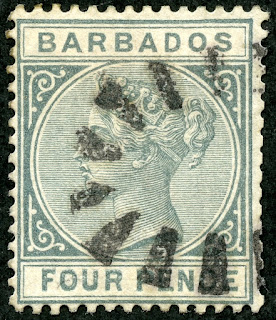 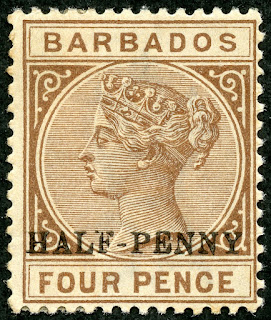 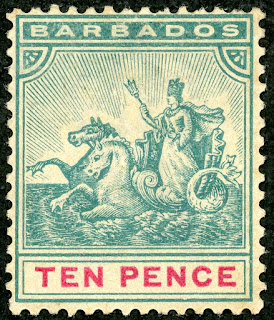 Note the watermark is "Crown and C A" (Wmk 2). There will be a later issue with a different watermark (Wmk 3).

I might want to mention here a "Dag Hammarskjold invert" situation that happened to Barbados much earlier- in 1907.

Here is the story: A version of the Barbados badge as published by the Admiralty
The seal or badge of the colony was designed in about 1880, and shows the ruler in a seahorse drawn car. The image was that of a crowned queen with orb and trident, obviously representing Victoria during her reign. The badge remained in use until 1966, when a new flag was adopted for independence. 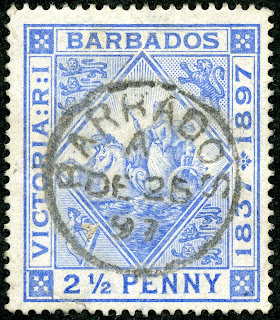 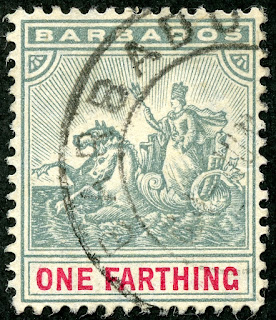 If one needs to review the watermarks, check Gibraltar or other British colony posts. 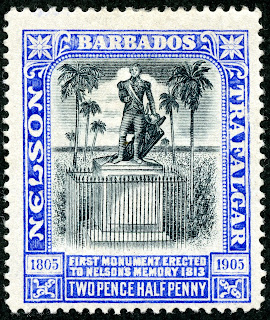 1906 Scott 106 2 1/2p ultramarine & black
"Lord Nelson Monument"; Wmk 1
For the centenary of Lord Nelson. a seven stamp engraved set was released in 1906, showing the first monument erected in Barbados to Nelson's memory in 1813.

Note the watermark is "Crown and C C" (wmk 1). A later similar issue will have a different watermark.

Death of Nelson by Daniel Maclise (Houses of Parliament, London)
"England expects that every man will do his duty": Lord Nelson
Vice Admiral Horatio Lord Nelson was a naval war hero, known especially for his exploits during the Napoleonic Wars. He was killed during his final victory at the Battle of Trafalgar in 1805. By his death, he became one of Britain's most heroic figures. His body was brought back to England for a state funeral. 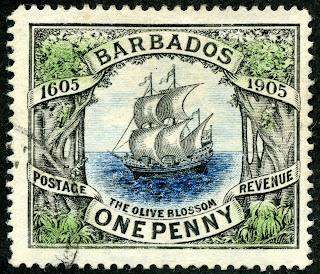 *Of interest, many historical accounts had an erroneous date for the 1st British landing: It was in fact 1625, not 1605.

Janet Klug, the well known prolific writer of articles for Linn's, believes, that, after the Canada 1929 Schooner Bluenose stamp, the "Olive Blossom" stamp might very well be the most striking.

The stamp was designed by Lady Gertrude Carter, an accomplished American artist, and the second wife of Sir Gilbert Thomas Carter, the governor of Barbados.

Her grandson, Nick Carter, became the president of the American Philatelic Society for 2007-08!

Well, what about the history that the stamp commemorates?

"The Olive Blossom",an English ship, landed in Barbados in 1625, and the ship's crew claimed the land in the name of King James I. Settlers arrived in 1627.  Barbados became, first, a prosperous sugar colony, then the regional center of the African slave trade, until slavery was outlawed in 1897. 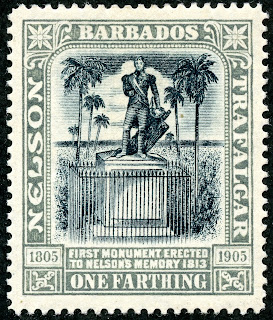 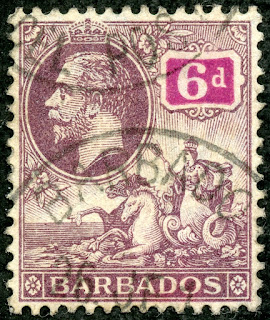 1912 Scott 123 6p violet & red violet
"George V & Seal of Colony"
With George V on the throne of Great Britain, a typographic eleven stamp issue with his visage and the seal of Barbados was released in 1912. There were actually three designs, with a larger format stamp for the higher denominations.

The definitive issues to come (1916-1947) did away with portraits of monarchs, and featured the "Seal of the Colony" design. This will be explored further in the next Barbados blog post. 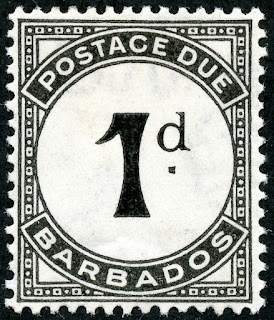 1934 Scott J2 1p black
Between 1934-1947, a three stamp typographic postage due issue, very utilitarian, and similar to other British colonies, was issued for Barbados. 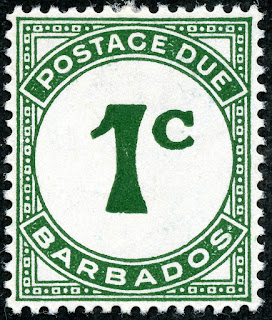 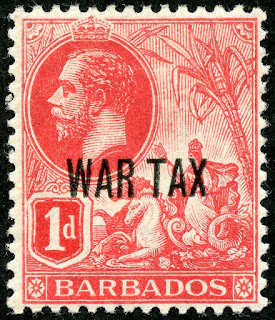 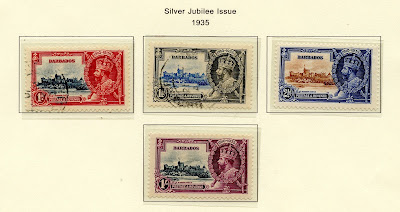 1935 Silver Jubilee Issue in Deep Blue
Deep Blue (Steiner) has 24 pages for the 1852-1952 stamps of Barbados. All the Scott major numbers have a space.

For the general WW collector, perhaps the Steiner pages are  a bit overkill for the earlier issues. My "Britannia" holdings only begin after three empty pages! 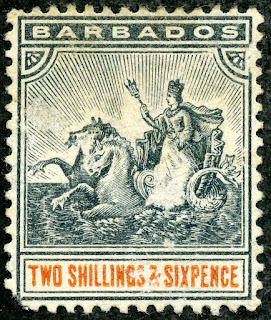 I will continue with Part 2 for Barbados in the next blog post.

Note: "Death of Nelson" painting image, Barbados badge image, and map all appear to be in the public domain.