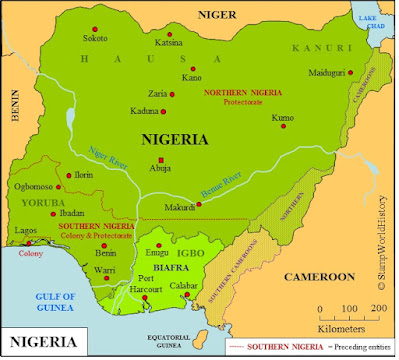 As it was before and after 1914
Map salvaged from Gerben Van Gelder’s now sadly defunct "stamp world history" web site
Bud's Big Blue
Bud's Observations
As the French split up their West African colonies to gain greater control ( see Niger comment)  British consolidated administrative units with the same goal in mind. In 1914, they forged the new colony of Nigeria from the former Niger Coast Protectorate (aka Oil Rivers), Lagos, Northern Nigeria, and Southern Nigeria (including areas once managed by the Royal Niger Company) and, eventually, parts of German Cameroon. All of these, except the Royal Niger Company, are shown on the above map and have their own sections in Big Blue.
Both French and British strategies appear to have worked as intended. The boundaries remained basically the same until the independence movements of the 1960s and 70s, although Biafra, the former Oil Rivers area, seceded from Nigeria in 1967. 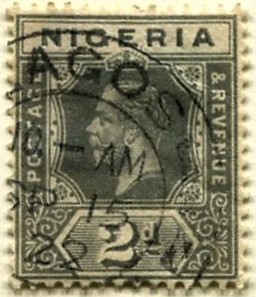 Scott #21 gray, die 2, Lagos cancel 1922
Since Nigeria Colony was formed rather late in the classical stamp era, there are relatively few stamps to collect. Scott’s catalog lists 78 for 1914 through 1949 while Stanley Gibbons counts only 67. This small number might lead collectors to believe Nigeria’s stamps could be a purchasable complete collection. All are readily available, but the higher values are pricey. More so for freaks, anomalies and rare die types. And so, my supplement page has only four stamps. Although all Big Blue spaces are filled (see below), completing my Nigeria collection awaits the arrival of an unexpected windfall.

Nevertheless, Nigeria’s expensive stamps might be a good long-term investment. Lagos, the nation’s capital, will soon become the world’s most populous city and may have 100 million residents by the end of the 21st century. If stamp collectors count for some small portion of these millions, prices will soar, especially for excellent used examples.

Even in 1914, the amalgamated colony’s population exceeded 17 million, of which only 2700 were European, of which only 1100 were colonial officials (according to “Colonial Report No. 920 – Nigeria, 1915”). Stamps were used, of course, mainly by the European population. Therefore, better used examples are scarce and command high prices.

Most of Nigeria’s classical era stamps have common British colonial designs. The only pictorial series, however, reveals Britain’s commercial aims for the colony – coco, tin, timber, palm oil, etc. The series begins, tellingly, with a cargo ship anchored at a wharf in the Lagos Lagoon. A Danish company now operates the wharf. The pictorial designs continued in use from the reign of George V through that of George VI. They portray a bucolic, prosperous utopia, rather unlike Nigeria’s burgeoning urban reality.

Jim's Observations
The Colony and Protectorate of Nigeria came into administrative (and stamp issue) existence in 1914 with the union of the Northern Nigeria Protectorate and the Southern Nigeria Protectorate. The name "Nigeria", of course, is derived from the Niger river that runs through the colony.
The reality was that the north and south were still only loosely affiliated.  The north, with its Islamic culture, was governed through Emirs, and Christian missionaries were banned. Hausa was recognized as an official language in the north. In the south, Christianity and western education were more prominent.In 1920, a portion of German Cameroon was mandated to Britain. and was absorbed into Nigeria.The Capital is Lagos, and the population was 21,000,000 in 1941.Nigeria became independent in 1960, although the country is still a member of the Commonwealth of Nations.
Nigeria Blog Post & BB Checklist
Page 1 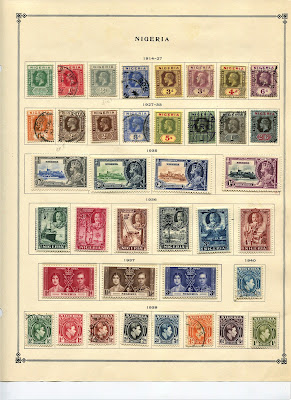 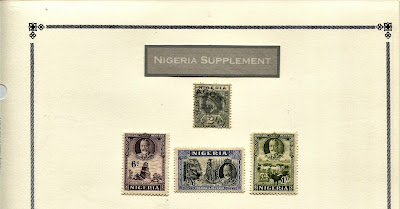