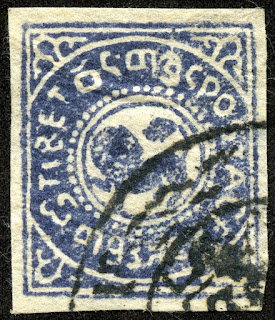 "Tibet is a theocratic state, ruled by the Dalai Lama, and a large part of the population consists of Buddhist monks and nuns. While occasional expeditions have been able to penetrate the country- a British mission fought its way to Lhasa in 1904- it is largely terra incognita, as entry by Europeans is strictly discouraged, except in very rare and exceptional cases. Tibet's postage stamps are valid only within its own borders."

Nothing like remote turning into exotic to make collectors desire a little piece of tangible paper evidence. ;-) 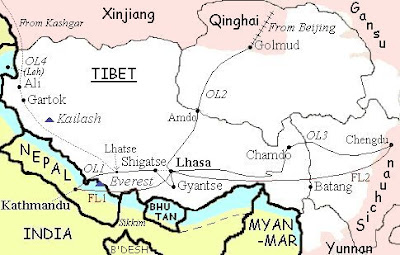 Map of Tibet
Tibet is located on a high tableland in central Asia, with China to the east, Turkestan on the north, and Nepal, Bhutan, and India to the south.

Since 1950, Tibet has been under the control of China, and China has tightened the yoke, not necessarily in Tibet's favor. China has allowed Tibet to be a destination for intrepid travelers and tourists, but under some scrutiny. 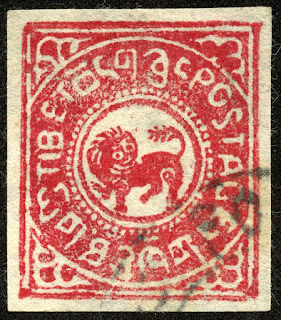 A larger problem is that "excellent counterfeits exist" (Scott). One will need to purchase from a reliable source, or obtain certs, or become an expert in detecting forgeries, or take one's chances. ;-) I've done the latter, which means there could indeed be counterfeits mixed in here.

One thing of note: all of Tibet's postage stamps were only valid within its borders. 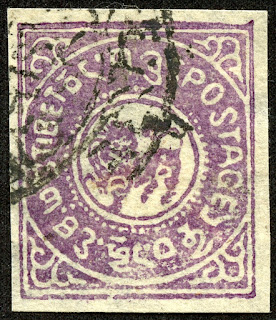 1912-50 Scott 3 1/2t violet "Snow Lion"
Issued in sheets of twelve in December, 1912, each stamp or cliche was hand carved. There were five values produced by typography, imperforate, and on native paper. A sixth value (1s sage green) was not released until 1950.  Numerous shades exist.

There were fourteen post offices opened up by the Tibetan government. 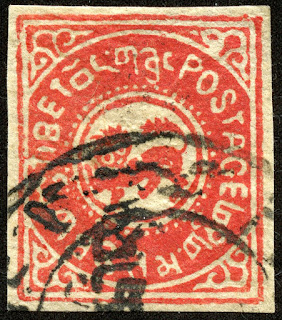 The stamps were also printed in shiny enamel paint (from Europe), giving the surface a glossy appearance, rather than ink between 1920-30. These varieties are minor numbers in Scott.

If one is seriously interested in the stamps and postal history of Tibet, consider joining the Nepal and Tibet Philatelic Study Circle. They have published  the Postal Himal Quarterly Bulletin since 1974. Many of the past Bulletins are available as a free download from Digital Himalaya hosted by the University of Cambridge. 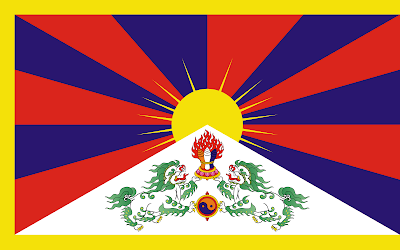 Flag of Tibet 1912-50 showing Snow Lions
The national emblem of Tibet is the Snow Lion, a celestial creature - white with a turquoise mane- that represents the snowy mountains and glaziers, and symbolizes both fearlessness and joy. 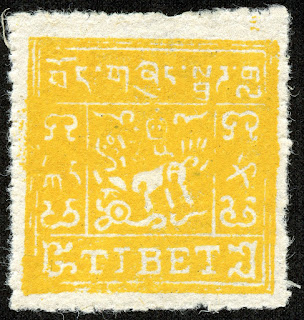 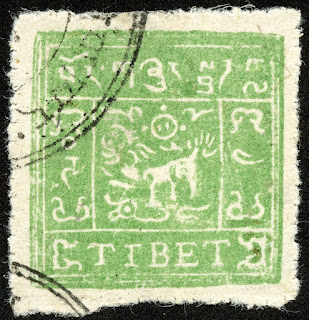 Tibet is a fascinating country for the WW collector, but frankly, it is specialist's territory. The counterfeits scare me, as one would need to become deeply immersed in the Tibetan philatelic specialty subject matter in order to give oneself some assurance. 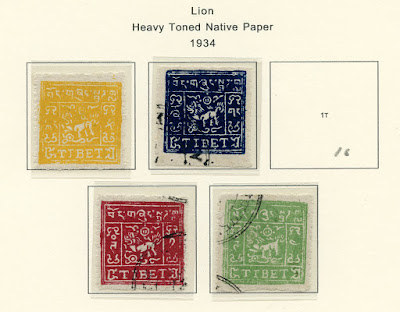 1934 Issue in Deep Blue
Deep Blue (Steiner) has two pages for the stamps of Tibet. The spaces include the minor number 1920 "shiny enamel paint' variety issue. 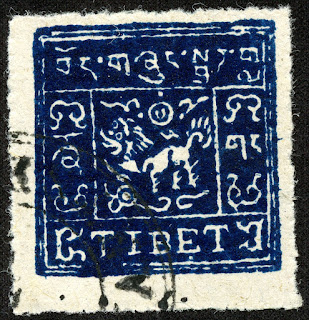 Of interest, all of the stamp spaces require CV stamps ranging from $14-$55.

Refer to the "comments" section below the checklist for specifics. 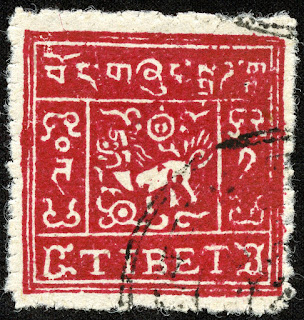 1934 Scott 17 2t red
Out of the Blue
There is a fellow in our local stamp club that specializes in the stamps of Tibet. I get the distinct impression in talking with him, though, that Tibet is not a good playground for philatelic dilettantes such as myself. ;-)

Note: Map and Tibetan Flag images appear to be in the public domain.