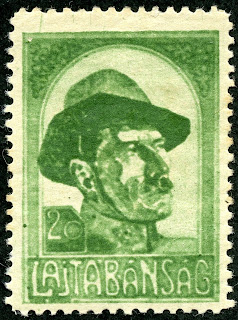 1921 Scott 68 20f green "M.M. Pronay"
Into the Deep Blue
Attached like an afterthought at the end of Scott's Hungary catalogue pages is "Western Hungary" - little known and even less loved.

But nary a mention of "Western Hungary". And no spaces in Big Blue for them either.

But truth be told I love obscure "countries". :-)

After WW I, and under the terms of the 1920 Trianon Treaty, four districts of western Hungary were to be under Austrian administration. 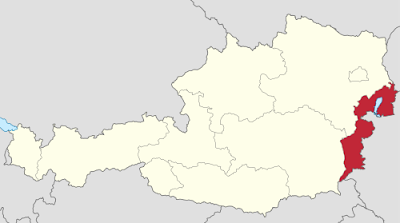 Uprising in west Hungary August 28 - October 13, 1921
Short Lived State of Lajtabansag and Military uprising
Map shows the present day Province of Burgenland in Austria
Three of the districts were German speaking, and joined Austria, forming Burgenland. But in the fourth district (including the city of Sopron), Hungarian revolutionaries resisted the incorporation.

During the September - December, 1921 period, local authorities issued stamps, and they were sold in Post Offices controlled by the Hungarian partisans. 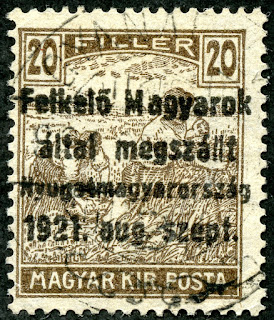 Overprinted text translates "Rising Hungarians conscious of/ aware of /enthralled by Western Hungary" (Rough translation for meaning). Clearly, the text is encouraging citizens to think of themselves as part of a new (Hungarian) State. 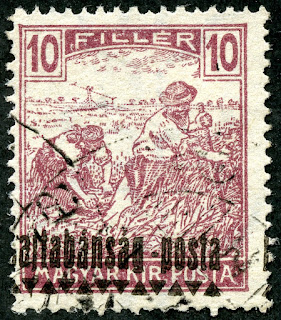 1921 Scott 20 10f red violet "Harvesting Wheat"
Overprinted on Hungarian stamps of 1916-20
On October 5, 1921, a thirteen stamp overprinted issue on Hungarian stamps was released. The text states: "Lajtabansag Post". The short lived State of Lajtabansag formally began on October 4, 1921 and ended November 10, 1921. I think Lajtabansag was dissolved as part of the agreement to hold a plebiscite (scheduled for December 14-16). Of course the State of Lajtabansag was only a "temporary State" anyway, until it could re-unite with Mother Hungary. 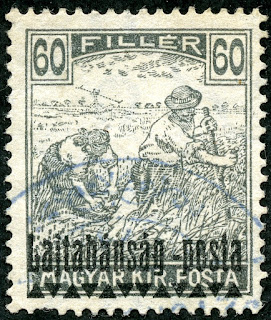 1921 Scott 25 60f black "Harvesting Wheat"
Overprinted on Hungarian stamps of 1916-20
These overprints were probably in recognition that the State had been declared, and a "Post" was now in operation 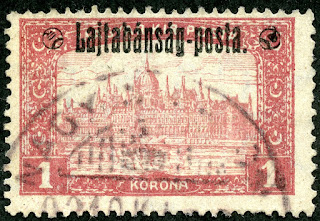 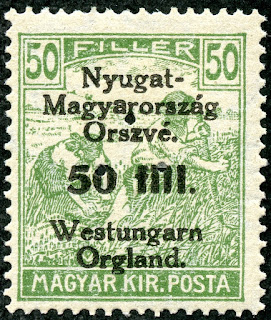 By the way, all of the Western Hungary overprints can be found with the 3-hole punch. They command a 20%-50% CV premium. 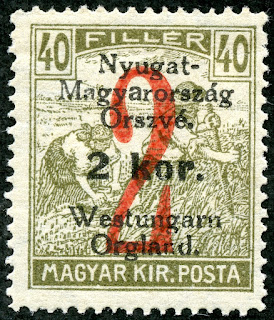 1921 Scott 63 2k on 40f olive green "Harvesting Wheat"
Overprinted on Hungarian stamps of 1916-20
The top text translates to "Western Hungary District" (Rough translation) in Hungarian, while the lower text states that in German. 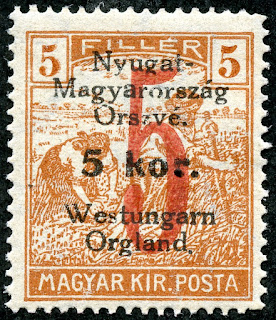 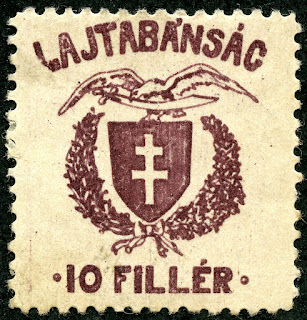 1921 Scott 67 10f violet brown "Arms"
On November 11, 1921 an eleven stamp issue for Lajtabansag proper was released. Of interest, the formal State of Lajtabansag was dissolved on November 10, 1921. Apparently the Posts kept going. 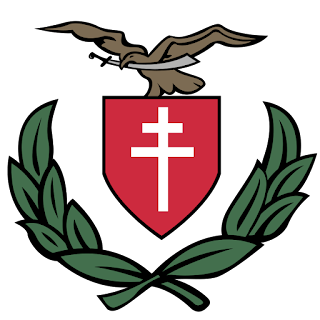 Coat of Arms of Banate of Leitha
Any self respecting unrecognized State needs to have a Coat of Arms, and so here it is. 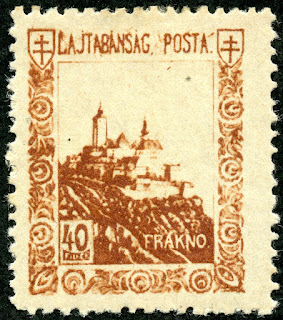 1921 Scott 69 40f red brown "Frakno"
Frakno/Forchenstein Castle had been Hungarian Royal domains (Esterhazy Family)  for centuries. Obviously, this stamp is arguing that it should remain so, and not become (German) Austrian.

Unfortunately (for Hungarians) the Burg Forchenstein became part of Austria. The Esterhazy family still owns it. 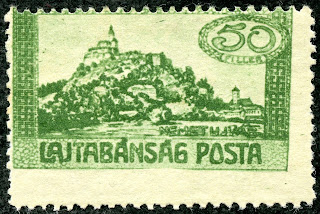 1921 Scott 70 50f green "Netmetujvar"
(Burg Gussing Castle)
The Burg Gussing Castle (sorry for the lack of umlauts!) is now in southern Burgenland, Austria. The Castle was established by Bela III of Hungary around 1180. Naturally, the Hungarians would have liked it to remain with Hungary. 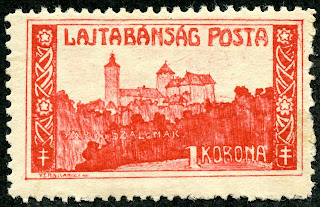 For the eleven stamp issue, CV is <$1 for every stamp. Clearly, even today, supply outpaces demand. 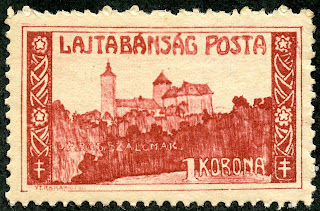 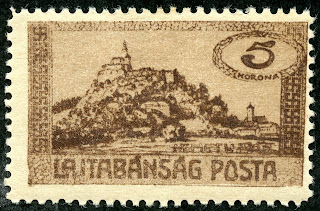 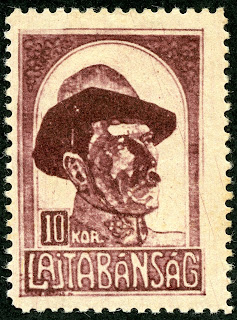 Pal Pronay was the leader of the Rongyos Garda (Tattered/ Scrubby Guard), a rag-tag group of insurgents, and supported secretly by the Hungarian Government. When the territory was supposed to be handed over on August 19, 1921 to Austria, the Rongyos Garda began a guerrilla war against the Austrians. 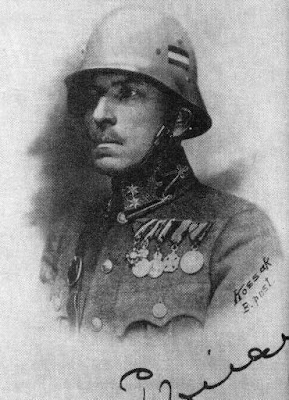 Pal Pronay
Pronay wrote in his memoirs " "In order to save Western Hungary, I have created an independent Lajtabánság". 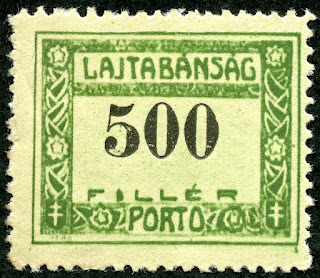 1921 Scott J7 500f green & black
Postage Due
Five postage due stamps were released November 11, 1921. CV is <$1 for each stamp. "Used" is valued a bit more than "unused". If these postage due stamps were in use legitimately, that would argue that the postal system run by Western Hungary was indeed a real postal system, and not just some "labels" issued by an  attention seeking unrecognized state. 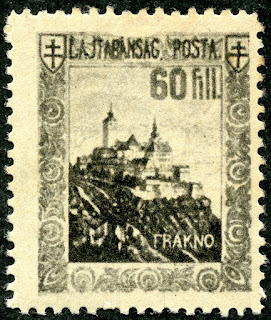 1921 Scott 71 60f black "Frakno"
Out of the Blue
I must admit I have developed more respect for the stamps and history of Western Hungary. And in view of the fact that the uprising lead to a successful plebiscite, perhaps this event and history should be better known among philatelists.

Note: The pic (Pronay) and scans (Maps, Coat of Arms) are from open sources on the internet, and are used here for educational purposes.