1899 Scott 153 300r on 200r purple "Southern Cross"
Issue of 1890-93 Surcharged in Violet or Magenta
Into the Deep Blue
This post (and subsequent ones in this intermittent series) will feature stamps I have very recently acquired that have been added to "Deep Blue", my name for the classic era (1840-1940 WW; -1952 British Commonwealth) Steiner pages.

This post will be about the Brazil additions, extracted from a Brazil feeder album in January of this year.

Well, I can promise that the stamps presented will be interesting to the WW collector as they will not be common or ordinary.

If they were common or ordinary, they would have already showed up among the some ~50,000 stamps (out of some 83,000 possibilities) that I have in Deep Blue! 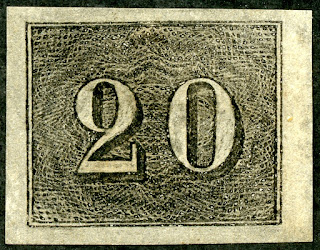 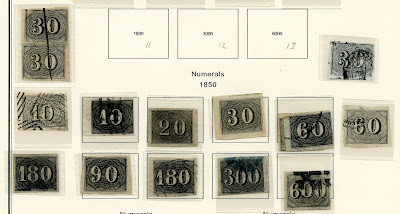 Brazil 1850 Imperforate Issue
As one can see, the 20r black completes "filling" the spaces. It turn out the CV $90+ for the 20r is higher than six of the seven other denominations. The exception is the 600r black ($110). 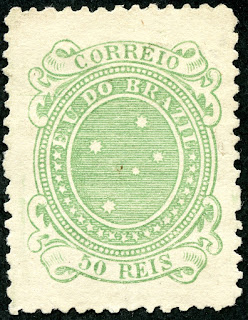 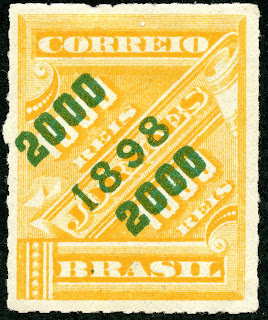 I should mention that I added 46 stamps to Brazil, to make the total 576 stamps in Deep Blue. Scott shows 669 possibilities (major numbers) for Brazil 1840-1940. I have 86% of the possibilities for Brazil.

1898 Scott 136 20r on 10r blue
Black Surcharge
The only example of this surcharge I have (There are a total of three stamps with this surcharge design). CV is only $3+, so perhaps not as common as the CV would suggest. 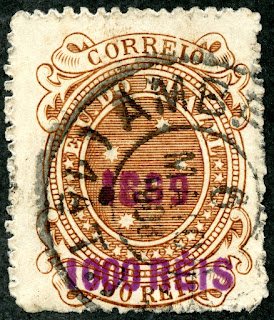 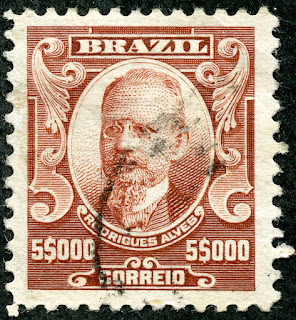 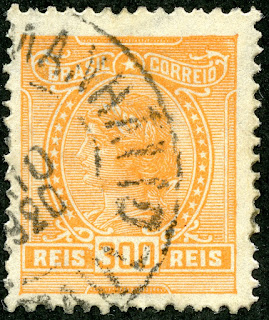 1918-20 Scott 212 300r orange "Liberty Head"
Wmk 100 "CASA DA MOEDA"
Brazil has plenty of watermarks, and naturally, there are stamps, such as this one, that requires watermarking for identification. This has Wmk 100, rather than the unwatermarked Scott 205. 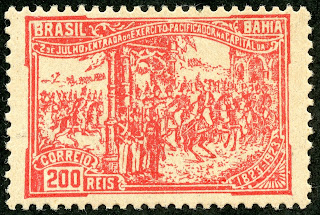 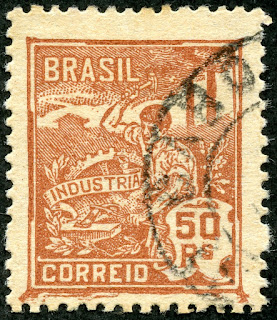 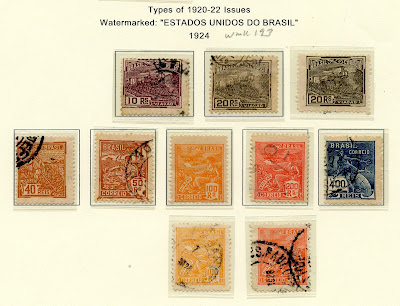 1924 Issue
Types of 1920-22 Issues; Wmk 193
The 50r orange brown completes the set. I'm not getting into the challenges/pain of watermarking Brazil here, but refer you to my Brazil watermarking post. 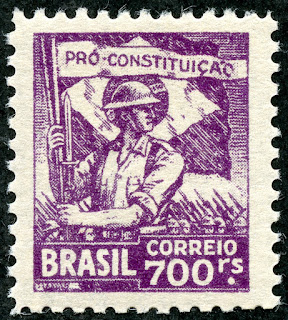 1932 Scott 370 700r violet "Soldier and Flag"
Revolutionary Issue
In 1932, the revolutionary forces in the state of San Paulo issued an eleven stamp set. 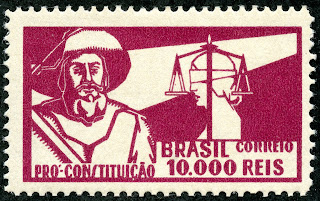 1932 Scott 374 10000r plum
"Symbolical of Justice"
Revolutionary Issue
The Issue was then recognized by the Federal Government, and placed in general use. 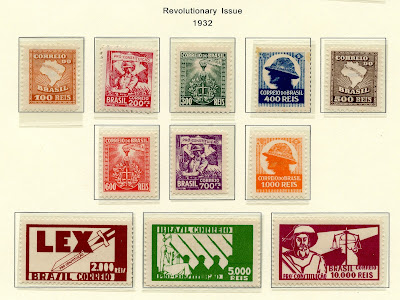 1932 Revolutionary Issue
The lithographic issue has a higher CV for used (beware of favor cancels), but the unused CV ranges from <$1 to $20+. 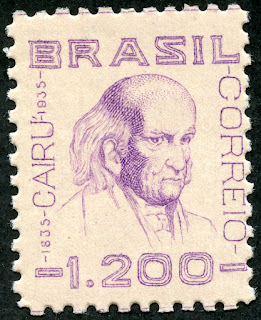 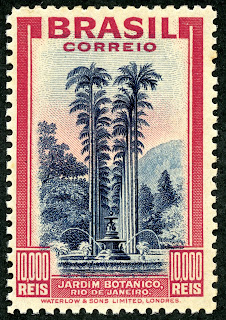 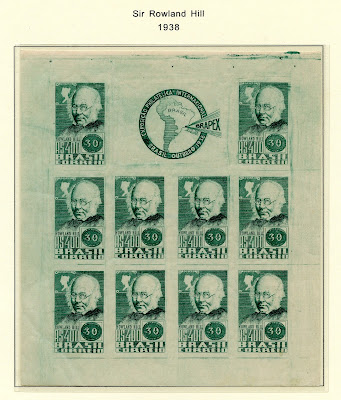 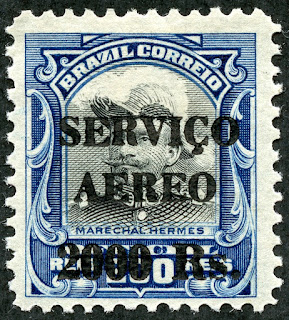 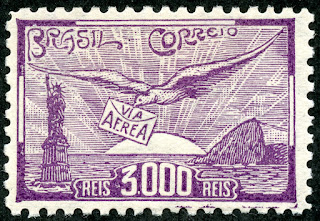 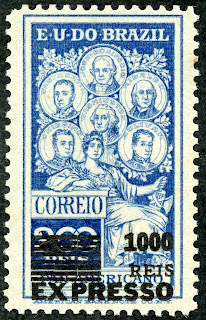 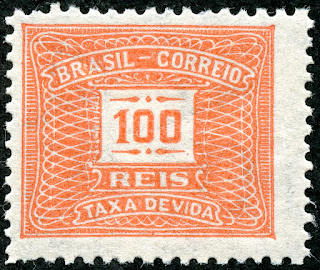 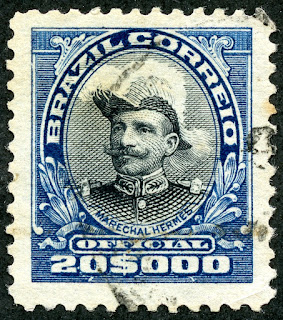 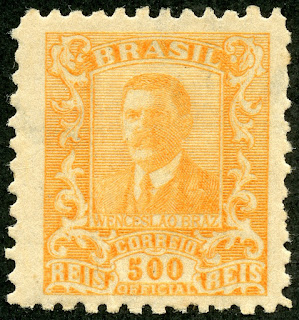 1919 Scott O34 500r orange
"President Wenceslau Braz"
In 1919, a five stamp Official set with this one design was issued. CV (unused) ranges from <$1 to $9+. Of interest, eleven stamps were supposed to be issued, but in fact, only five were. There must not have been much demand for this issue, as these stamps were subsequently surcharged in 1928 for regular use. 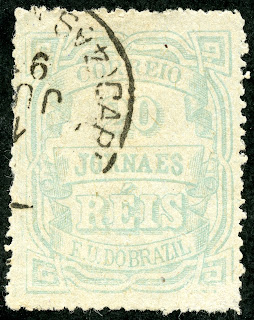 Newspaper 1890 Scott P20 20r emerald
White Wove Paper
I suspect some fugitive ink must have been used for this 1890 newspaper stamp, as it appears quite faded (soaking in water will remove the ink). CV is $20. 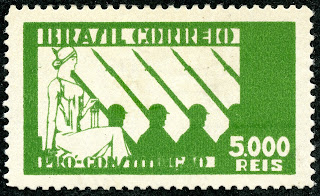 1932 Scott 373 5000r yellow green
"Symbolical of Law and Order"
Revolutionary Issue
Out of the Blue
Hope you enjoyed viewing some of the recent Brazil stamps added to Deep Blue. I think most WW collectors do, so I will continue with the "show & tell" for other countries with subsequent intermittent posts.