Recent Additions to the Collection for 2019 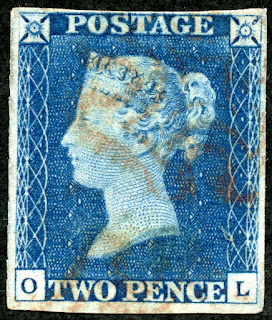 First issued May 7, 1840, one day after the equally iconic One Penny Black, this engraved GB design has rarely been surpassed for simplicity and beauty. Only two plates were needed, compared to the eleven plates for the Penny Black, and then the Two Penny Blue design had white lines added in 1841.

So really only a year for the original Two Penny Blue. Naturally the CV cost is high ($900+). But a nice opportunity arose, and I took it.

And that is indicative of this past year - a year of changes and opportunities. As I stated in the last annual review for 2018, this year would be more about a targeted "want list" approach, and less about purchasing feeder albums. Recall that I collect WW 1840-1940 (-1952 British Commonwealth).

Well, I still purchased country feeder albums, but ones in which I felt would yield enough new stamps to justify the overall cost. Then I bought select stamps and sets from dealers and the internet (mainly the APS store). And sometimes an opportunity would present itself (as above, and more stories to follow).

I began the year with 49,560 stamps in Deep Blue (classical era Steiner pages) and 30,496 stamps in my virtual Big Blue (Scott 1840-1940 International Part I). As many of you know, I keep my stamps in Steiner pages (Deep Blue), but keep virtual count of stamps that have a space in Big Blue.

Which countries did I add the most stamps for the year?

In prior years for this annual review, I  would illustrate a few of the stamp additions for each country on the list. But some of these countries (Russia, Brazil, Germany, France/China Offices, St Pierre & Miquelon) I've already shown with timely posts this past year. And others (Cilicia, Orange River Colony) I plan to do future in-depth posts. That leaves me with the delicious choice to do what I like for this year's review. ;-)

So here is an eclectic group of countries that have had additions recently... 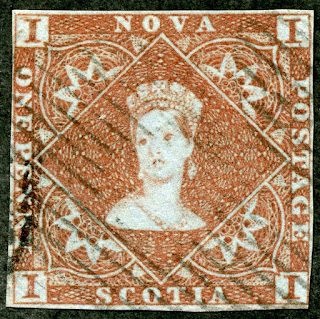 Nova Scotia 1853 Scott 1 1p red brown
"Queen Victoria"
A good friend of mine in town was thinking of downsizing parts of his collection, especially British North America, which he had built up over the years. Well, I love British North America issues, and it wasn't too long that we came to an agreement. The long and short of it is that I found myself with two nice early Nova Scotia stamps, and an early New Brunswick stamp. CV ranges from $500+ to $2,200+. All three stamps were still housed in their Steve Ivy Philatelic Auction envelopes. 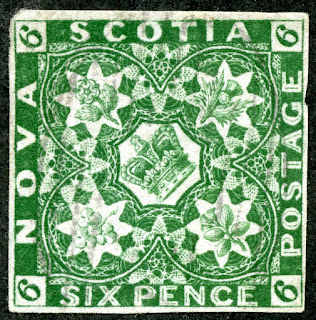 Nova Scotia 5 1857 6p dark green
"Crown of Great Britain and Heraldic Flowers of the Empire"
I think one of the reasons I like early Nova Scotia and early New Brunswick (the New Brunswick 1851 Scott 2 6p olive yellow is shown at the end of the post) is because some of my earlier ancestors, finding themselves on the wrong end of the Revolutionary War because of their Tory leanings, fled from Lancaster, Pennsylvania  to Nova Scotia in 1781. (Others fought on the Patriot side.) 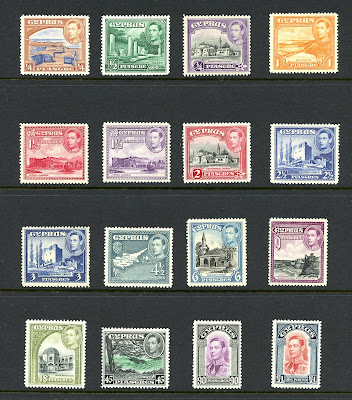 Cyprus Scott  1938-44 Scott 143-155 Pictorials
One of the longtime dealers in Oregon, one which I've had dealings with ever since I bought a large stuffed Big Blue feeder album from him eight years ago, specializes in British Commonwealth issues. 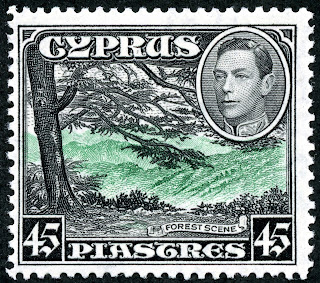 Cyprus 1938 Scott 153 45pi black & emerald
"Forest Scene"
He had a full unused set of the 1938-44 pictorial issue for Cyprus. I was missing the last three stamps in the set, which is where most of the CV resides. Look at this gorgeous engraved stamp! Who could resist? 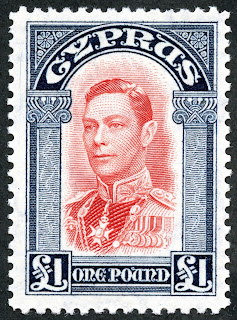 Cyprus 1938 Scott 155 One Pound indigo & dull red
"George VI"
A common scenario for us WW collectors is obtaining/accumulating perhaps 80% of a set through picking up one or two stamps at a time. Yet the rest of the set is where the CV lies. So, although counter-intuitive, as we have most of the stamps, the smart thing is then to buy the whole set. At least one will have duplicates for trading. ;-) 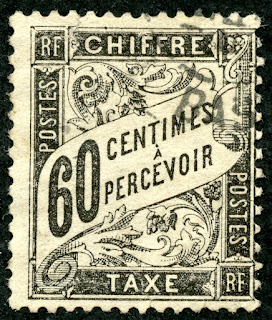 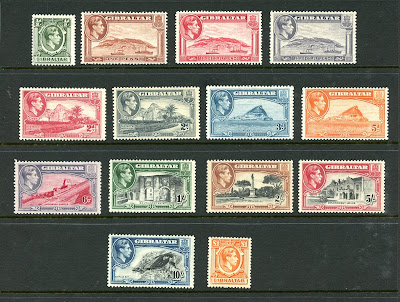 Gibraltar 1938-49 Scott 107-118 Pictorials
This was a pick-up from my friendly British Commonwealth dealer in Oregon. (See earlier Cyprus.) 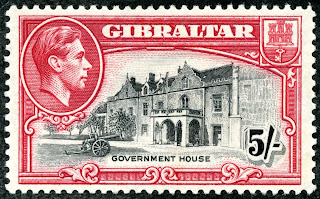 Gibraltar 1944 Scott 116 5sh dark carmine & black
"Government House"
As I said, the high values of a set is also where the CV for the set is mostly derived. 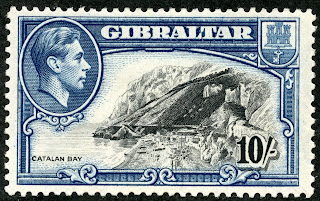 Gibraltar 1943 Scott 117 10sh blue & black
"Catalan Bay"
I am a sucker for the engraved pictorials issued for many British Commonwealth countries beginning in 1938. Just click on the stamp, enlarge it, and enjoy the fine line detail. !!! 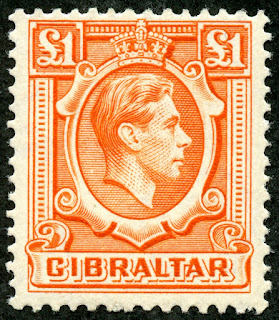 Gibraltar 1938 Scott 118 One Pound Orange
"Edward VI"
This modest little stamp has a high value denomination (One Pound), and a similarly high CV ($30). 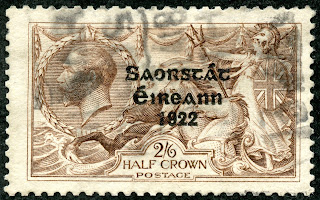 Ireland 1925 Scott 77 2sh6p gray brown
"1922" is 5 1/2 mm long
A local dealer in town had several thousand higher value individual WW classical era stamps housed in separate glassine envelopes that he had picked up from a deceased meticulous collector. Each stamp, as it turned out, was correctly identified. Do you know how uncommon that is? Whenever I obtain a stamp, I make sure to do my own watermarking, perforation measuring etc, because not infrequently, the stamp is not quite what it was labeled to be.

The dealer had no time to evaluate and market these stamps, and gave the whole box to me to ferret out what I needed. I found several hundred WW stamps I could use, and paid a minimal % CV for them. 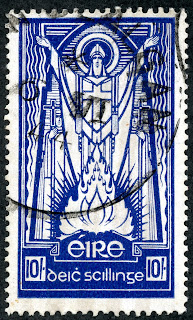 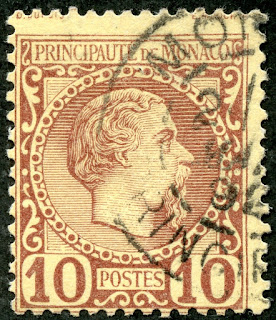 Monaco 1885 Scott 4 10c brown/straw
"Prince Charles III"
At our local stamp show, there is a "Floor to Ceiling" dealer, who is based in Oregon, but goes to all the major US stamp shows. By "Floor to Ceiling", I mean his stock is WW, each stamp is housed individually by country, and he needs a Mercedes Sprinter Van to bring everything. Naturally, his stock is a fertile hunting ground for WW collectors, especially if one has a "want list", as he is likely to have some to most of it. 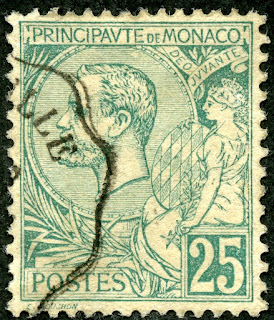 Monaco 1891 Scott 20 25c green
"Prince Albert I"
The reality of a "Floor to Ceiling" dealer is, since he has done most of the parsing work to make his enormous stock accessible down to the individual Scott number, his % CV prices will be in the higher range (50%). 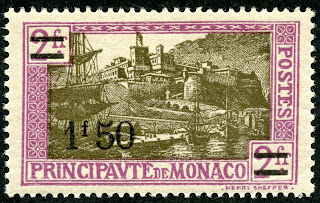 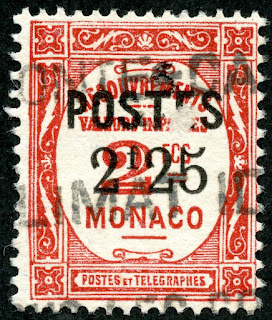 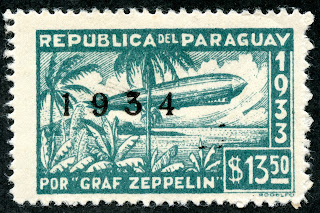 Paraguay 1934 Scott C90 13.50p blue green
""Graf Zeppelin" over Brazilian Terrain"
Overprinted in Black
A local dealer tends to have varying stock for Central and South America, and he also has an interest in carrying Zeppelin stamps.

And that is how I acquired some Zeppelins from Paraguay.

Of interest, note how the scene depicts the Zeppelin over Brazil! I guess Paraguay wanted to get in on the stamp action. ;-) 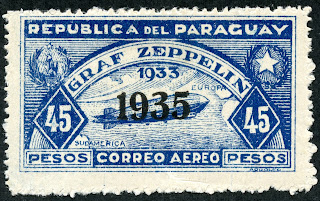 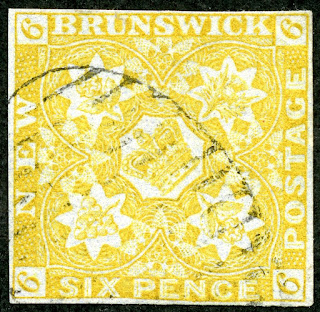 New Brunswick 1851 Scott 2 6p olive yellow
""Crown of Great Britain and Heraldic Flowers of the United Kingdom"
Out of the Blue
I hope the examples of stamps acquired by me this past year warms your heart, and gives you a greater appreciation of the stamp art and design during the "golden age" (classical era).