Angola stamps follow a pattern common to Portuguese colonies, starting in this instance with images of Carlos I, then Manuel II, followed by two varieties of Ceres and concluding with the 1938 common design series. These are interrupted by a plethora of philatelically complex overprints issued during politically unstable times. Earlier stamps did not make the BB cut for Angola, although they do for some Portuguese colonies; the supplement page has a few examples. Generally, Portugal supplied Portuguese stamps with colonial nameplates rather than making individualized designs for each colony. Why? Perhaps none of the Portuguese Kings were stamp collectors. Perhaps stamps with crowned heads were badges of domination.

Ceres, goddess of fertility, agriculture and motherhood, is one of the more common images in BB, thanks to Portuguese colonies. These stamps are sometimes difficult to sort. Scott has recently given them new catalog numbers, so internet listings might use the old or maybe the new numbers.
City/date visible cancels are often from Luanda, now the most populous Portuguese speaking national capital in the world.

Stamps for which BB provides no spaces are readily found.

BB offers in its Angola section the first spaces for postal tax stamps. These were used on specific days to pay for a monument honoring the 1st Marquis of Pombal, Sebastião José de Carvalho e Melo. BB must like this design because most other colonies have spaces for them, too. The monument, however, is not found in any of them.

Jim's Observations
Big Blue has some nice runs of stamps from Angola. There is just one problem. Angola's Stamps are cheap. By my count, from 1898, and using valuations up to $4 ( Many considerably less expensive), an additional 116 stamps could be added. That would bring  75% of Angola's stamps within reach.. There is a good chance these stamps will show up in collections, so supplementary pages are advised.

Note: The Angola checklist now includes both the "old" Scott numbers and the current numbers for the Ceres issue.

Page 1  (Note: Click on page to enlarge for examination.) 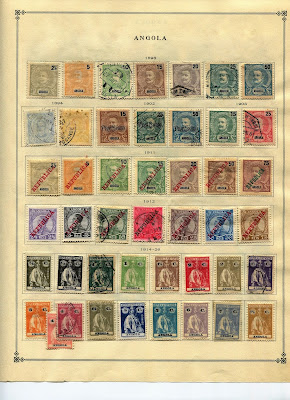 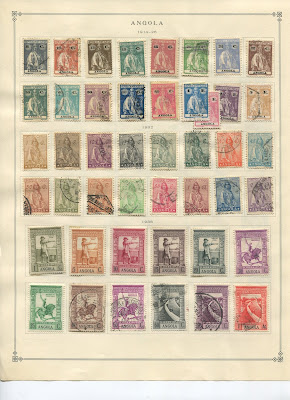 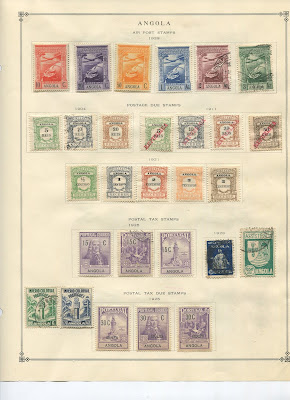 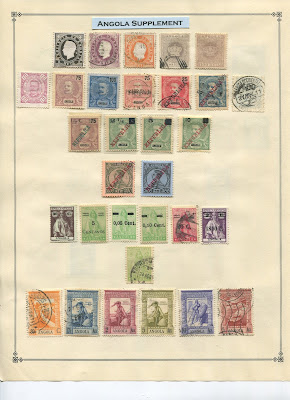 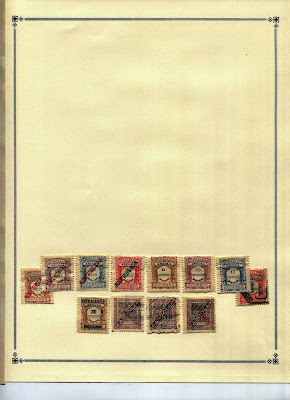