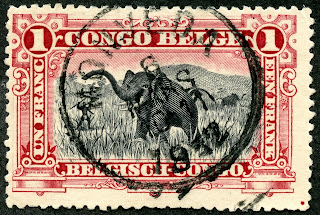 Original Belgium Congo Blog Post and BB Checklist is here. In Big Blue, the country's entry is under "Congo".

The Belgian Congo is an interesting country, both historically and stamp design wise.

The country initially existed (1886-1908) solely under the private ownership of King Leopold II of Belgium, as Belgium itself was not interested. The exploitation of the natives in the rubber industry became a major scandal and embarrassment. To correct the worst abuses, Belgium annexed the territory as a colony in 1908.

Between 1894-1925, some 71 bi-colored engraved stamps were released, either with pictorial designs or additionally surcharged.

Most are quite CV inexpensive, even today. And they are quite lovely.

But there were also some more interesting pictorials issued between 1920-1937. They are too good to ignore, so they will be featured with the next blog post. 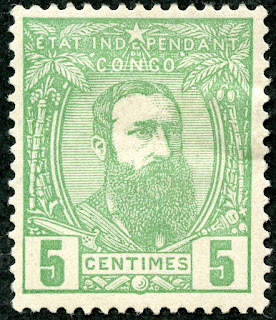 He acquired the lands to enhance the prestige of Belgium, and, not insignificantly, enrich himself through the forced labor of natives by developing rubber plantations, and exporting ivory and minerals.

Joseph Conrad's 1899 "Heart of Darkness" novel was based on, in part, the human suffering occurring there.

Counterfeits exist for both issues.

Information on counterfeit stamps can be found on the stampforgeries.com website. 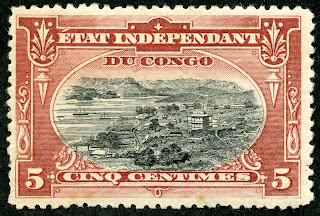 Port Matidi is up the Congo River 92 miles from the mouth, and was and is located just below where the Congo River has many rapids and becomes unnavigable. It was founded by Sir Henry Morton Stanley in 1879. 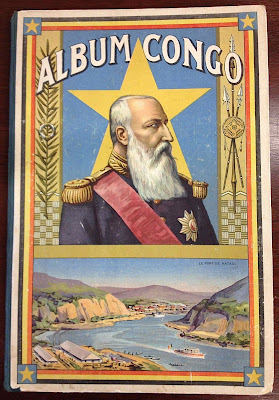 Port Matidi, on cover of trading cards from the Congo
The building (1890-1898) of the Matidi-Kinshasa Railway enabled transport of goods deep within the Congo to the Port of Matidi. 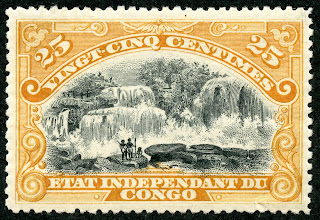 1894 Scott 20 25c yellow orange & black
"Inkissi Falls"
For the collector, the bi-colors of 1894-1898 can be confused with later issues which have the same pictorial scenes.

These 1894-1898 issue stamps are labeled  "Etat Independant Du Congo" during the era when Leopold II personally owned these lands. Later (after 1909), they will be labeled "Congo Belge" and/or "Belgisch-Congo". 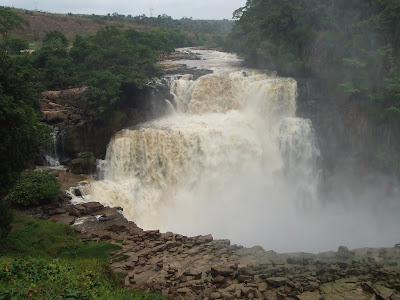 Inkissi (Inkisi, Zongo) Falls
The Inkisi Falls (180 ft drop) are located about six miles up the Inkisi River, a tributary of the Congo River. 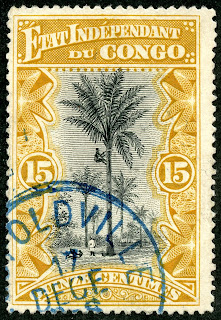 Of interest, the French Yvert & Tellier 1840-1940 catalogue use the term "cocotiers",meaning "coconut tree climbers", literally. I assume any climber of palm trees would be called a "cocotier" in French. 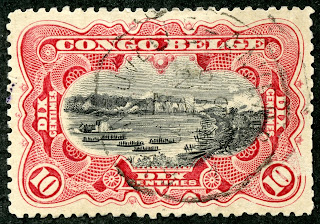 1909 Scott 42 10c carmine & black
Belgian Congo
River Scene on the Congo, Stanley Falls
When the colony was taken over formally in 1908 by Belgium, the country was renamed "Belgian Congo".

This four stamp issue is often misplaced in stamp albums.

The four stamps for the 1909 issue are only labeled "Congo Belge", in French.

But the next issue released in 1910 will have very similar stamps.  One difference is the 1910 stamps will have both "Congo Belge" in French and "Belgisch-Congo" in Flemish as labels. 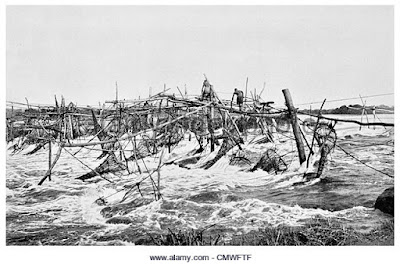 Native Fisheries at Stanley Falls in 1925
Stanley Falls (now known as Boyoma Falls), was obviously named for the explorer Henry Stanley. It actually consists of seven cataracts, each one no more than 16 ft high,  extending for 60 miles along a curve of the Lualaba River.  Below Stanley Falls, the river is known as the Congo. 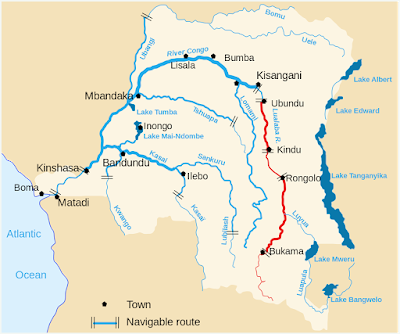 Lualaba River (In red)
Kisangani (Stanleyville) is where Stanley Falls ends
The stamp scene also shows the Stanleyville village area, now known as Kisangani. Kisangani is the third largest urban city in the Democratic Republic of the Congo. 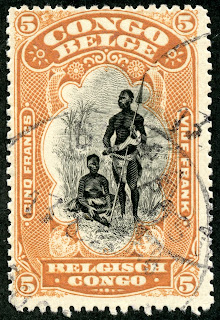 1915 Scott 58 5fr ocher & black
"Bangala Chief and Wife"
The 1910-1915 issue consists of 15 stamps, Of the ten pictorial scenes, all are recycled from previous issues. But the frames are new for this issue, and will show both the French name "Congo Belge" and the Flemish name "Belgisch Congo". 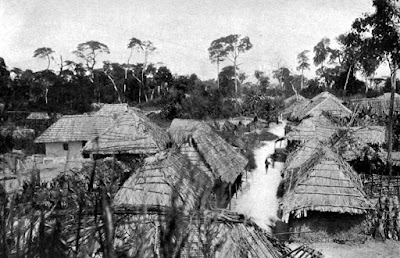 Camp of Bangalas, Stanleyville
The Bangala language is a Bantu language, and today is spoken or understood by about 3.5 million people. It actually is a way to communicate (lingua franca) between tribes of different ethnic groups that border the Congo River. 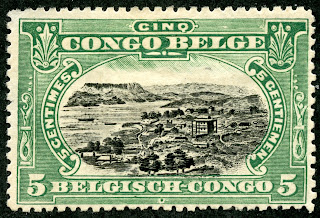 This 1915 issue looks very similar to the same denomination three stamps of the preceding 1910 issue, except this time, the denomination is included in numeral word format above "Congo Belge".

Note the "Cinq" above the "Congo Belge" in this example.

Such is the level of detail the collector must check to properly identify these bi-colors. 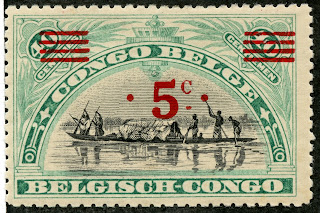 The scene is called "Congo Canoe" in Scott, but Y&T catalogue calls the scene "Embarcations indigenes", which like better. 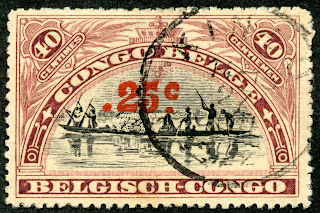 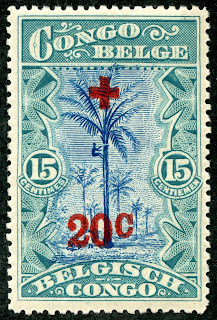 "Types" means the underlying stamps are produced here in a different color combination than the original issue. 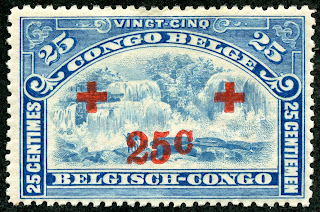 Here, the stamps "type" is produced as deep blue & pale blue, while the original 1915 stamp is blue & black. 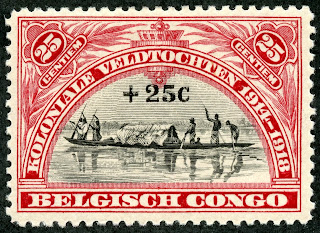 The vignette scene here had been used on prior stamps.

The two new frames differ in that one is inscribed in French, while the other is in Flemish. 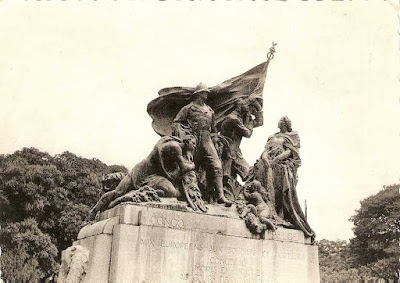 Monument du Souvenir , 1927
War Memorial
This may be the war memorial that was erected in 1927. 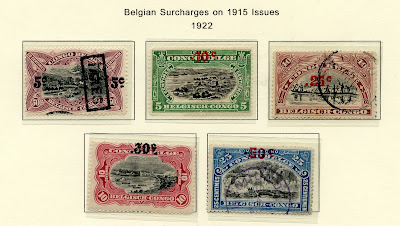 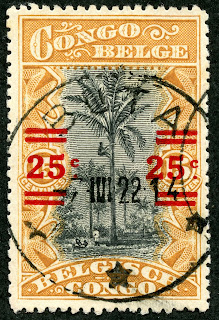 1921 Scott 67 25c on 15c ocher & black
Red Surcharge; "Climbing Oil Palms"
Out of the Blue
A bit more history is gleaned by following the stamps.