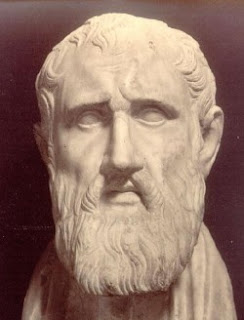 Historians and archeologists often compare Cyprus and Crete, the two great gems of the eastern Mediterranean. Both are at the crossroads of early civilization, have similar ethnic diversities and, as the shark swims, are less than 500 miles apart. So one might expect the scholars to turn up more convergences than divergences between the two islands.

BB’s crowd of collectors, however, will not be surprised that differences outnumber similarities. Look at the stamps side by side. While both islands’ early philatelic history has Austrian and Ottoman roots, from 1880 onward Cypriot stamps are sedately British. Nothing like Crete’s political turbulence surfaces in the stamps of Cyprus -- no foreign office stamps, no fakes, no revolutionary issues. That is not to say, of course, that Cyprus does not have a full share of turmoil; its history is rich and interesting.

BB provides for each island two pages with 65 spaces. The 1928 Cypriot series commemorating 50 years of British colonization temporarily abandons crowned heads in favor of local history and scenery -- churches, mosques and ancient artifacts including Zeno’s stoic bust. The heads return in 1934 but, happily, the scenery continues.

Jim's Observations
What I particularly like about Cyprus is not all the stamp designs are derived from the usual British Colony boiler plates. The 1828 issue Pictorials -"Silver Coin of Amathus", "Philosopher Zeno", "Map of Cyprus", "Discovery of the Body of St. Barnabas", and "Cloisters of Bella Paise Monastery", are very non-British in design and theme. They are gorgeous stamps. Take a look at Bud's Big Blue, and see if you agree. 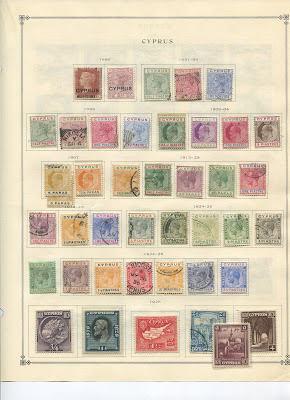 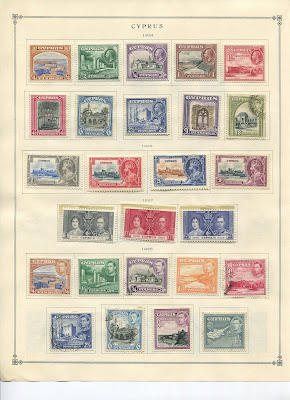 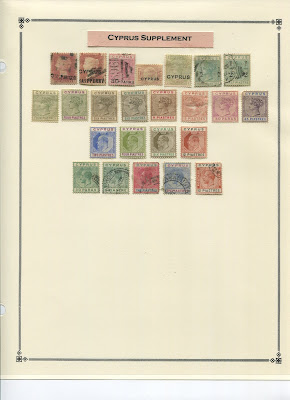