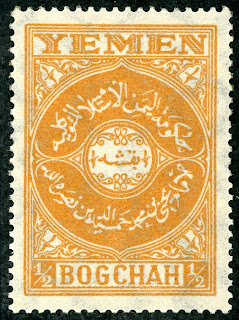 1931 Scott 7 1/2b orange "Arabic Inscriptions"
Quick History
The Arab Kingdom of Yemen (aka Hashemite Mutawakkilite Kingdom, North Yemen) existed as a state between 1918-1962 in the northern part of what is now called Yemen. It declared its independence from the Ottoman Empire on October 30, 1918. 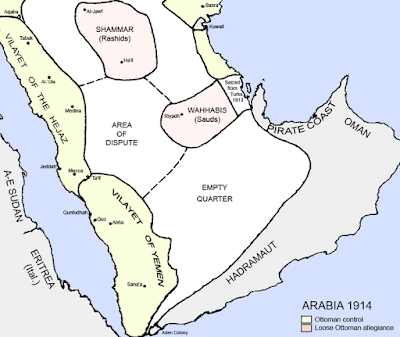 The Aden colony and the Hadramaut were under British protection. 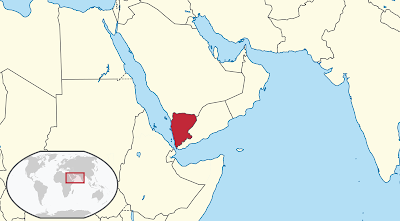 Location of the Kingdom of Yemen
The Kingdom, located on the southern end of the Arabian Peninsula, bordered on the Red Sea, the Gulf of Aden and the Arabian Sea, Saudi Arabia, and the British Protectorate of Aden. 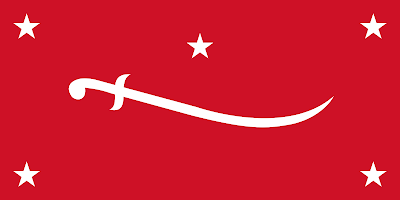 Essentially, after the Ottoman withdrawal in 1918, there was no formal postal system between 1918-1926.

Stamps for domestic postage were introduced in 1926.

International destinations were usually routed through the Aden British Protectorate.

The Kingdom joined the Universal Postal Union on January 1, 1930, and issued a seventeen stamp definitive issue for foreign and domestic postage.

The Kingdom was admitted into the United Nations on September 30, 1947.

On September 26, 1962, the Yemeni monarchy was abolished, and was succeeded by the Yemen Arab Republic (aka North Yemen, Yemen (Sana'a)).

(Kingdom of Yemen stamps continued to be issued between 1962-1970. They are not recognized and not in the Scott catalogue.)

The Yemen Arab Republic united with the People's Democratic Republic of Yemen (aka South Yemen - formally the British Aden Protectorate up to 1967 and independence) on May 22, 1990 to form the Republic of Yemen.

This is a fairly superficial quick history summary. In reality, there were civil wars, revolutions, revolts etc which were and are complicated and involuted. For a more nuanced history, see Stamp World History Yemen post and country diagram. 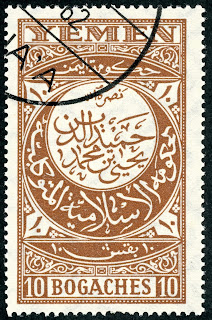 1930 Scott 19 10b light brown
"Arabic Inscriptions"
Into the Deep Blue
The 2014 Scott Classic Specialized 1840-1940 catalogue has, for Yemen 1926-1940, 40 major number descriptions. Of those, 31 are CV <$1-$1+, or 78%. Clearly, most of the modest Yemen output during the classical era is inexpensive. However, that does not mean the stamps are common in BB feeder albums - in my experience, they are not. One has to go out and specifically search for these issues on-line, or with dealers. But, yes, one can find them.

However, the first issue of 1926 - three typographic imperforates on laid or wove paper- are rather crude in appearance and expensive (CV $60). Also, here are forgeries  - especially on wove paper. I will say no more about them - specialist territory. ;-) 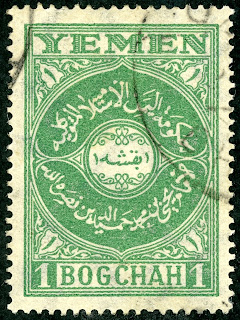 1930 Scott 8 1b green "Arabic Inscriptions"
Wmk 127 "Quatrefoils"
Upon joining the UPU in 1930, a seventeen stamp typographic definitive issue was released between 1930-31.

Although not needed for identification purposes, the paper was watermarked "Quatrefoils". 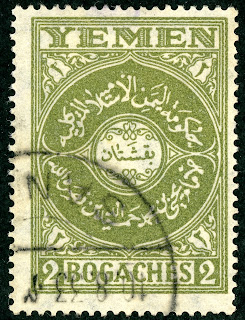 1930 Scott 10 2b olive green
The lower denominations had this Arabic inscription design. 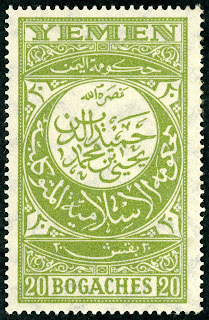 1931 Scott 21 20b yellow green
"Arabic Inscriptions"
The higher denominations were in a larger format, with a second Arabic inscription design. 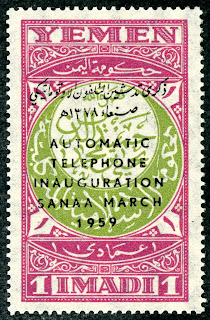 On 1931 Scott 23 var 1i lilac rose & yellow
Overprinted "Automatic Telephone Inauguration
Sanaa March 1959"
I have this stamp in my collection with the commemorative overprint as shown. I can not find this in Scott, Readers?

1939 Scott 29 1i claret & ultramarine
"Flags of Saudi Arabia, Yemen and Iraq"
Wmk 258 "Arab Characters and Y G Multiple"
For the 2nd anniversary of the Arab Alliance, a six stamp lithographic set was released in 1939. 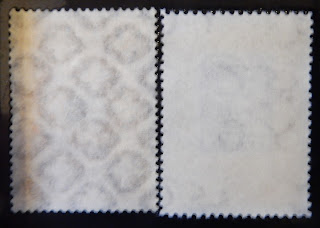 Wmk. 127 "Quatrefoils"
Wmk. 258 "Arabic Characters and Y G Multiple"
Of interest, here are watermarks for Yemen during the classical era. 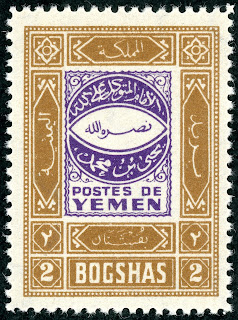 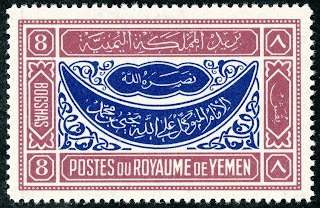 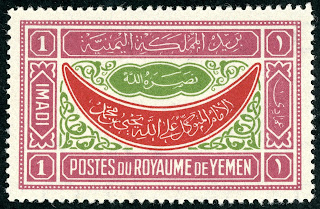 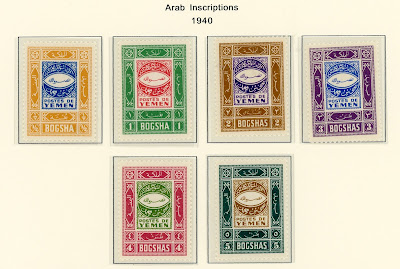 1940 Yemen Issue in Deep Blue
Deep Blue (Steiner) has four pages for the 1936-1940 stamps of Yemen. All of the major Scott numbers have a space. 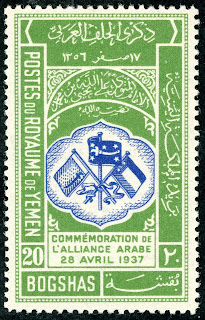 There are no expensive stamps. In fact, the entire group of spaces have a CV of <$1-$1.

But BB's coverage is borderline at best. The 1930-31 issue does not have spaces for four stamps of CV <$1-$1+, while two spaces have choices: leaving out two more stamps of CV <$1.

1940 Scott 35 4b rose & yellow green
"Arabic Inscriptions"
Out of the Blue
I'm rather fascinated with the Arabic inscripted stamp issuing countries. I cannot read Arabic (although my daughter can), but the mysterious lovely script and geometrical patterns are beautiful.

Comments Appreciated!
Posted by Jim at 9:00 AM