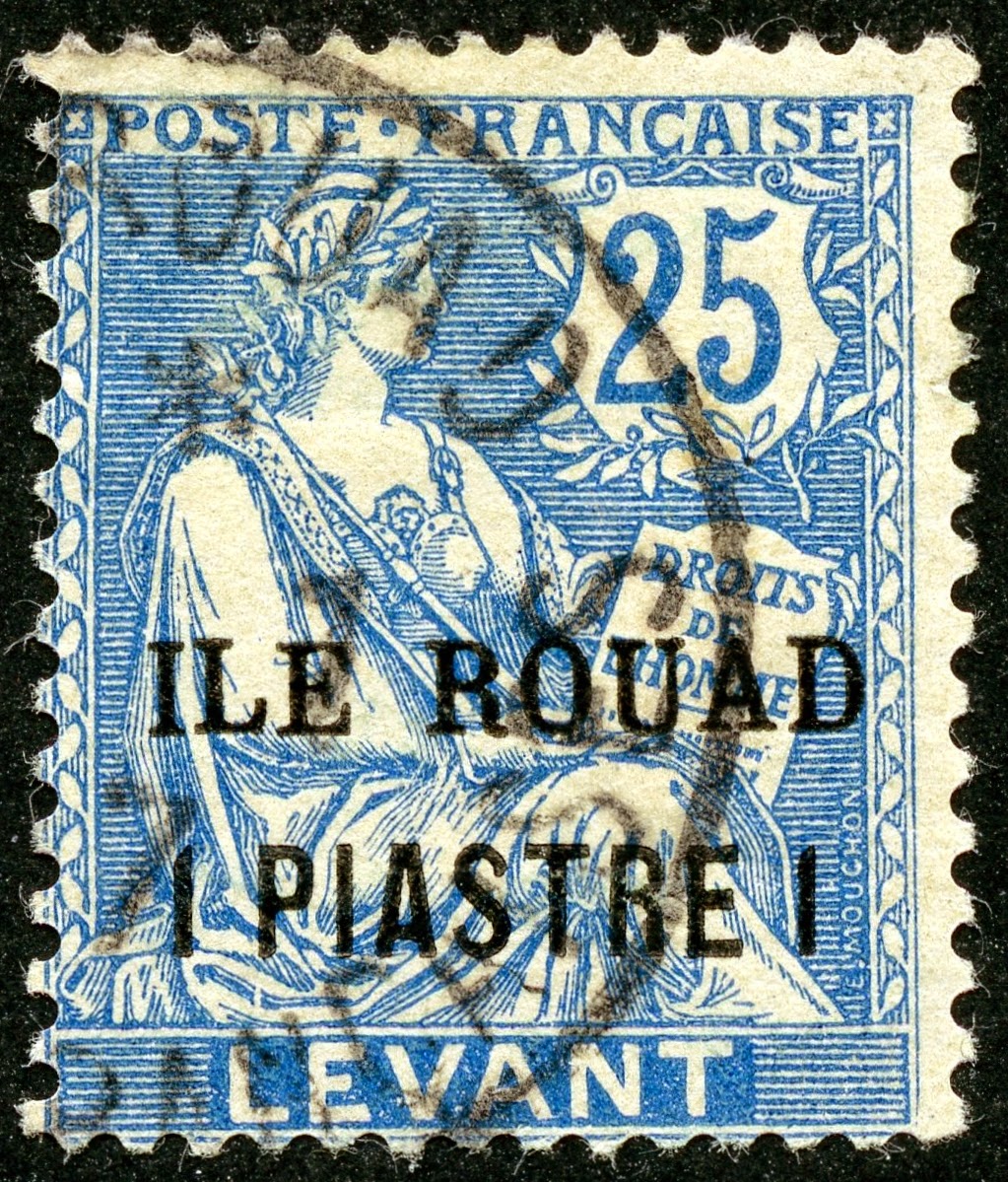 1916 Scott 11 1pi on 25c blue
Stamps of French Offices in Levant
1902-06, Overprinted Horizontally
Quick History
Ile Rouad (Arwad Island) is located in the Mediterranean Sea just 2 miles off the coast from Tartus, south of Latakia, Syria. But on September 1, 1915, it was occupied by French Forces, and served as a staging ground for incursions into the Ottoman territory (Damascus 1918).

Ottoman Empire before WW I (Red-brown)
The island (known as Ruad) had likewise served as a staging ground during the Crusades of the 13th century. 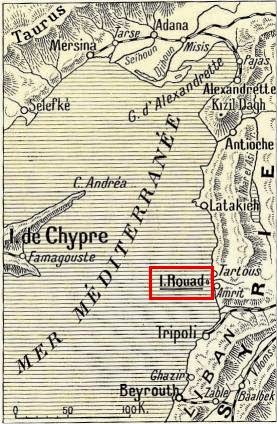 Location of Ile Rouad
The island is quite small (800 meters X 600 meters), and today the fishing town of Arwad with a population of 4,000 people fills the entire land. 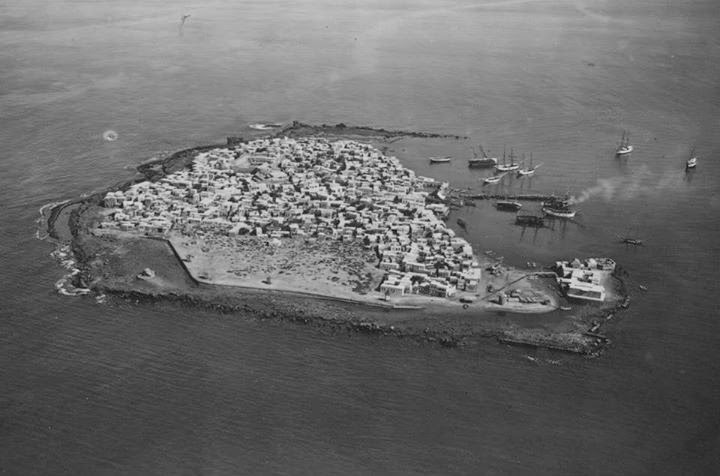 View of Ile Rouad (Arwad) 1935
In 1919, the island became part of the French T.E.O ( Territorires Ennemis Occupes), and the stamp issues of French occupied Syria were used. 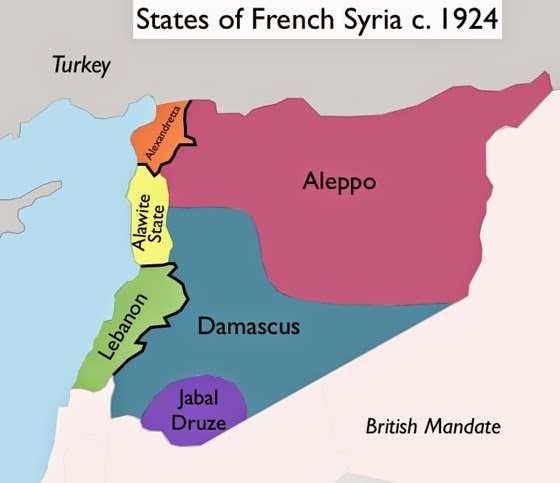 For subsequent history, see my postings on Alaouites and Latakia.

For a nice overview, check out Michael Adkins's Dead Countries Stamps and Banknotes. 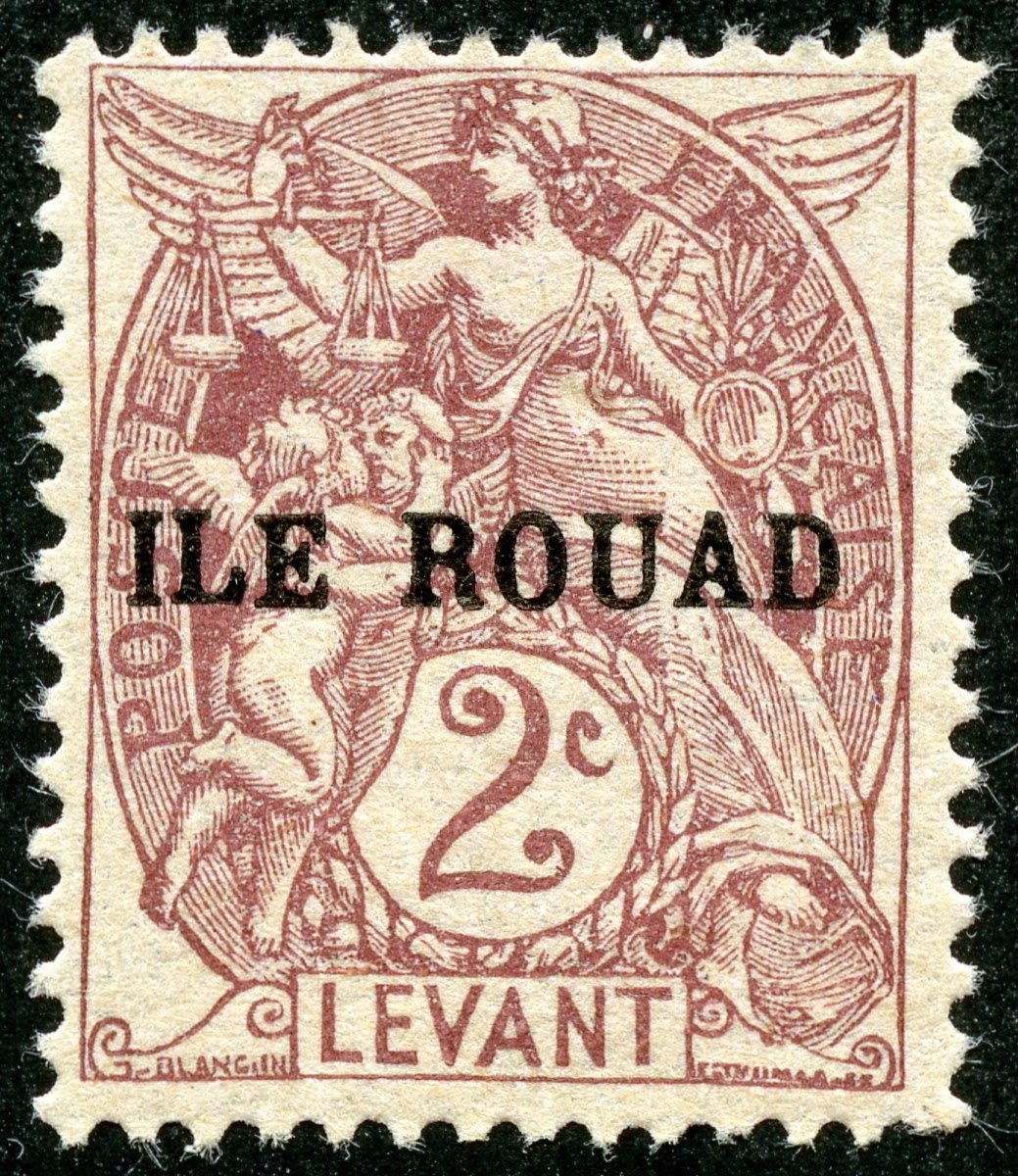 1916 Scott 5 2c lilac brown
Stamps of French Offices in Levant, 1902-06
Overprinted Horizontally
Into the Deep Blue
The 20111 Scott Classic Specialized 1840-1940 catalogue has, for Ile Rouad 1916, 16 major descriptions. Of those, 8 are CV $1+-$2+, or 50%. Of interest, Scott has used and unused at the same CV for the horizontally overprinted stamps, although I suspect genuine used stamps are scarcer.

A post office was opened up on Ile Rouad in early 1916.

The initial issue had three stamps with a vertical overprint using the stamps of the French Offices in the Levant, 1902-06. Scott states the stamps were first issued January 12, 1916, but other sources have April 5. This was a speculative handstamped overprint instigated by the stamp dealer Felix Cohen. The CV today is $250 for each of these. Scott has a note that dangerous counterfeit overprints exist for this vertical overprint issue. 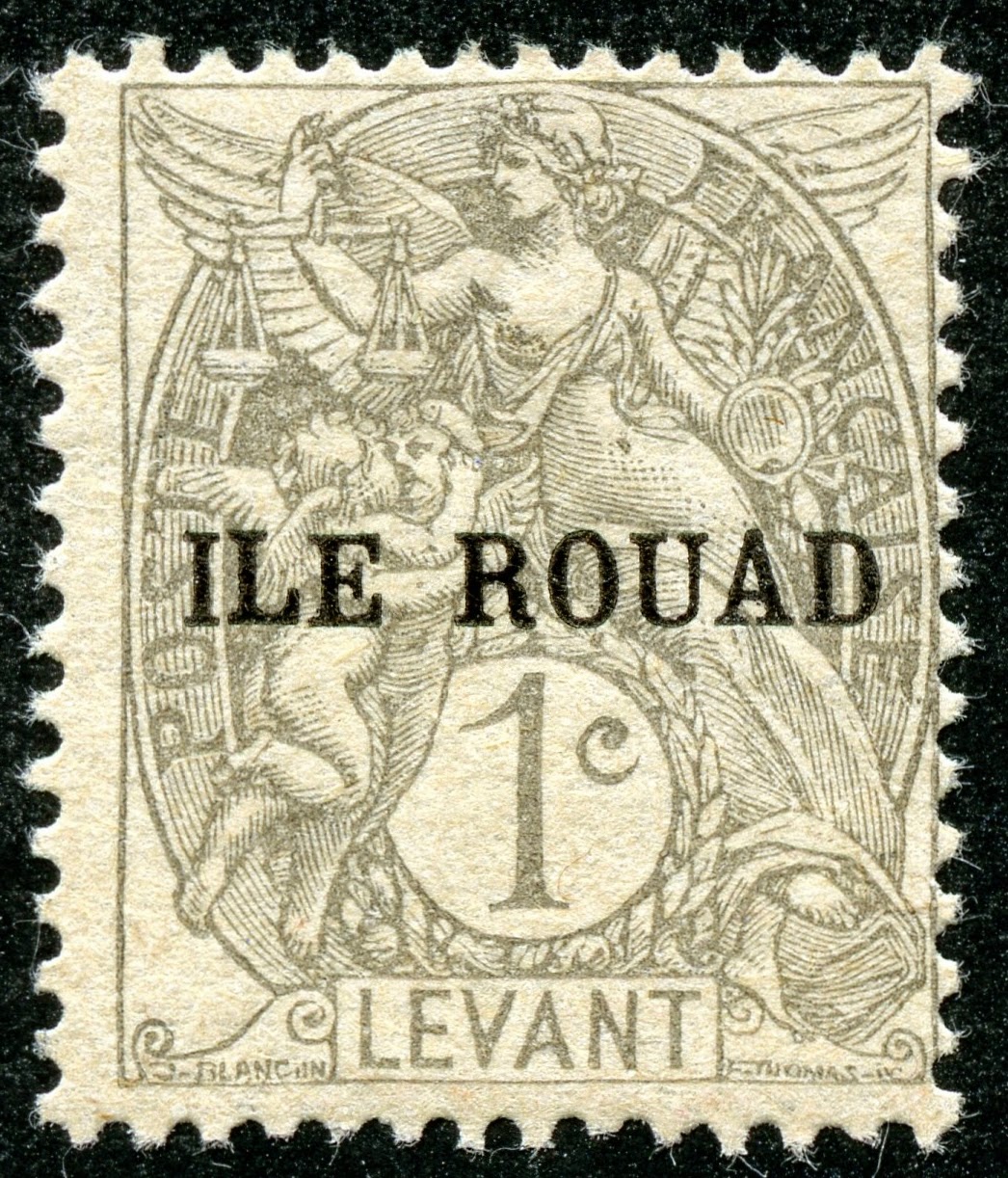 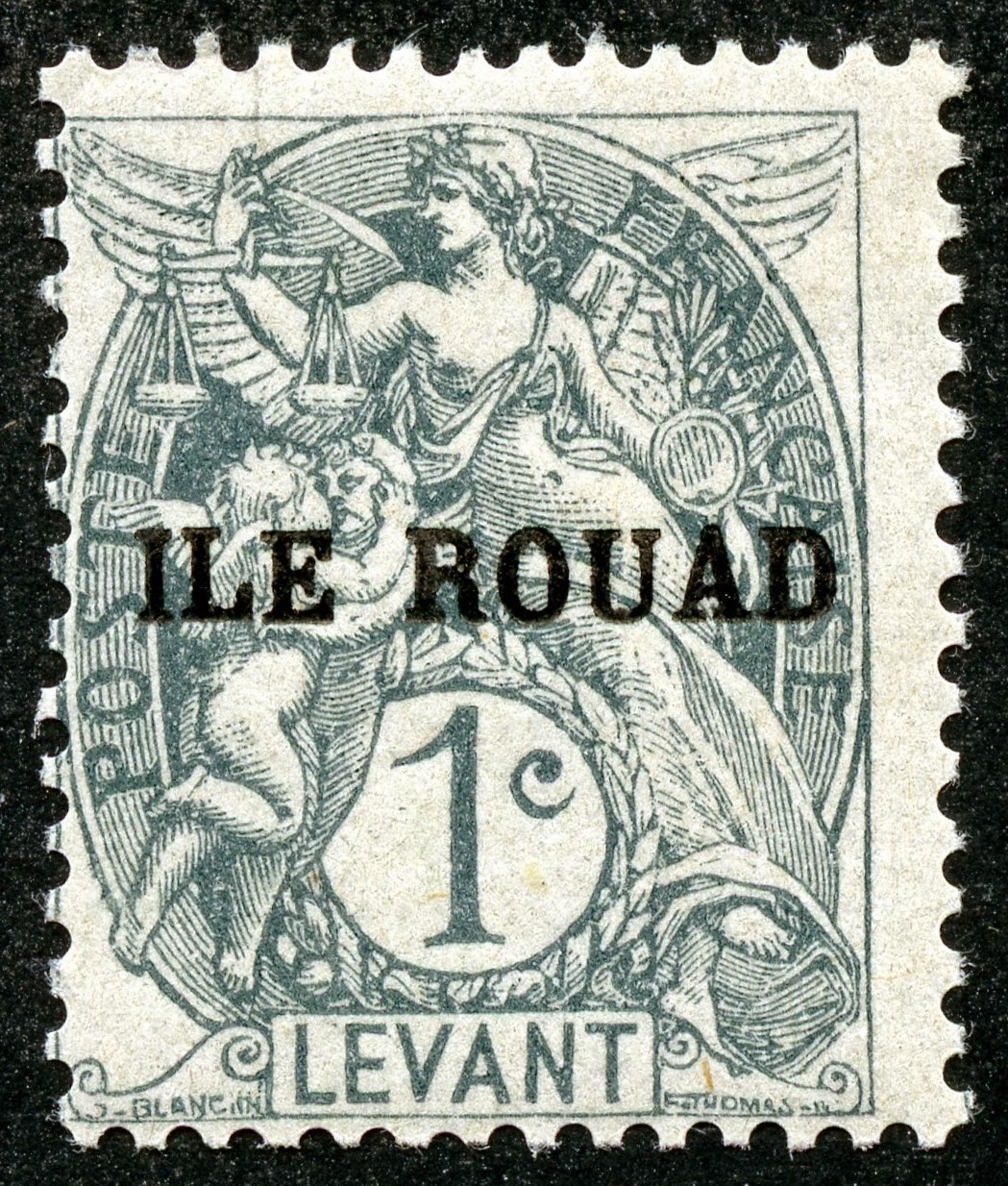 1920 Scott 4b 1c slate color variation
Anybody who collects this well known French design has come across color variations for the 1c. Here the slate is shown. 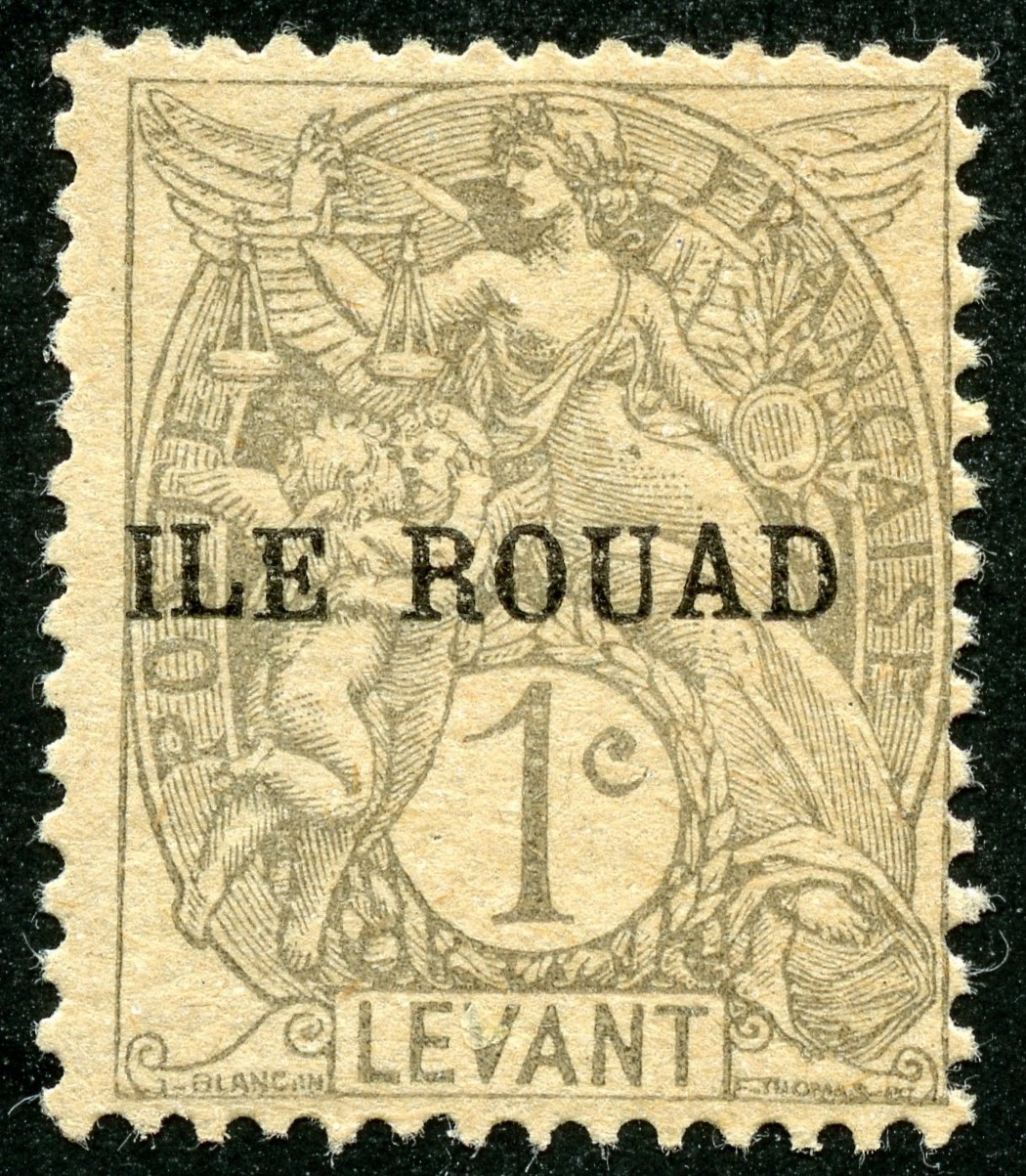 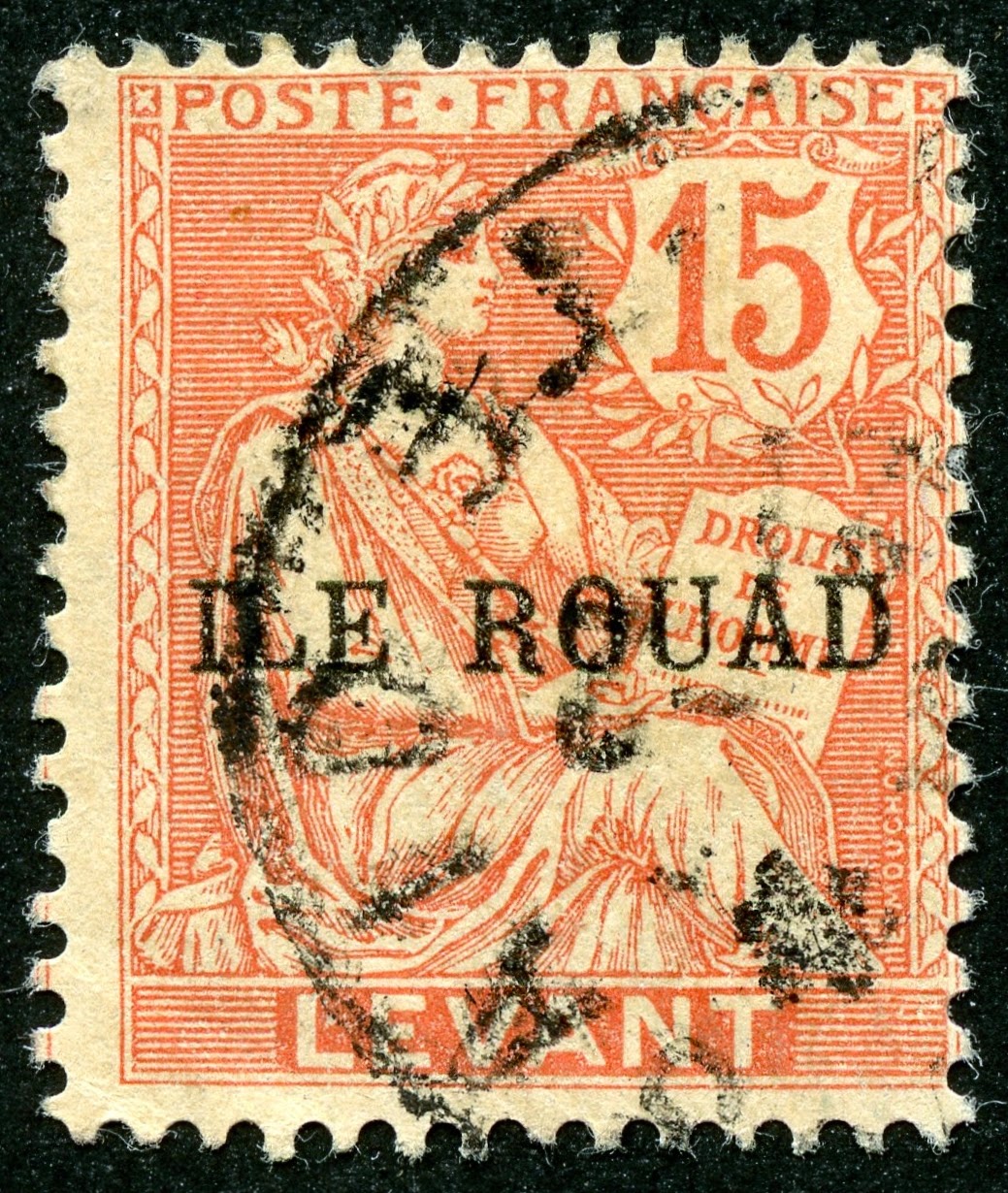 1916 Scott 9 15c pale red
As I mentioned, Scott values unused and used at the same price. I would think genuinely used specimens would be scarcer; certainly of more interest. 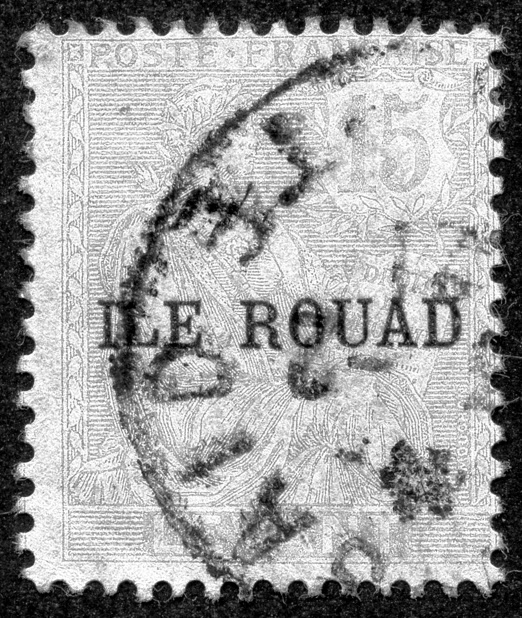 1916 Scott 9 with Postmark emphasized
Using the University of Utah web site retroReveal, I tried to get a better view of the postmark. My best guess is "Port Said", ????? -which is now part of Egypt. Was the stamp and cover cancelled there?  Readers- what do you think? 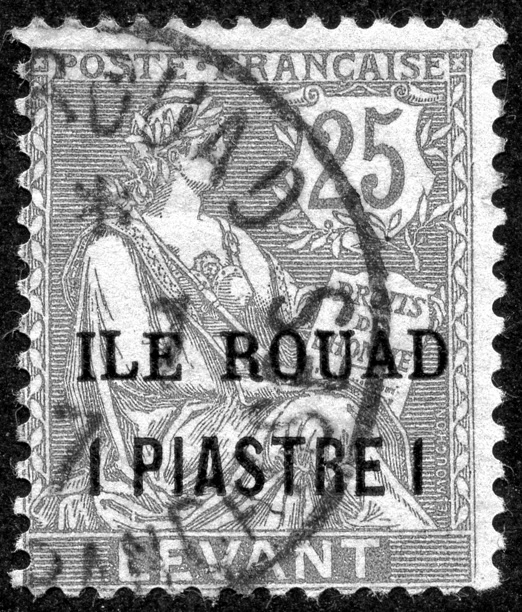 1916 Scott 11 with Postmark emphasized
I also applied the retoReveal channels to the 1pi on 25c specimen heading this post. Here, I was more fortunate, as I found an example of the postmark with an internet search.

1916 Horizontally Overprinted Issue in Deep Blue
Deep Blue (Steiner) has one page for the modest output of Ile Rouad. All major numbers have a space. Naturally, if one is also collecting minor number color variations, or the wartime G.C. paper issues, one will need additional space. 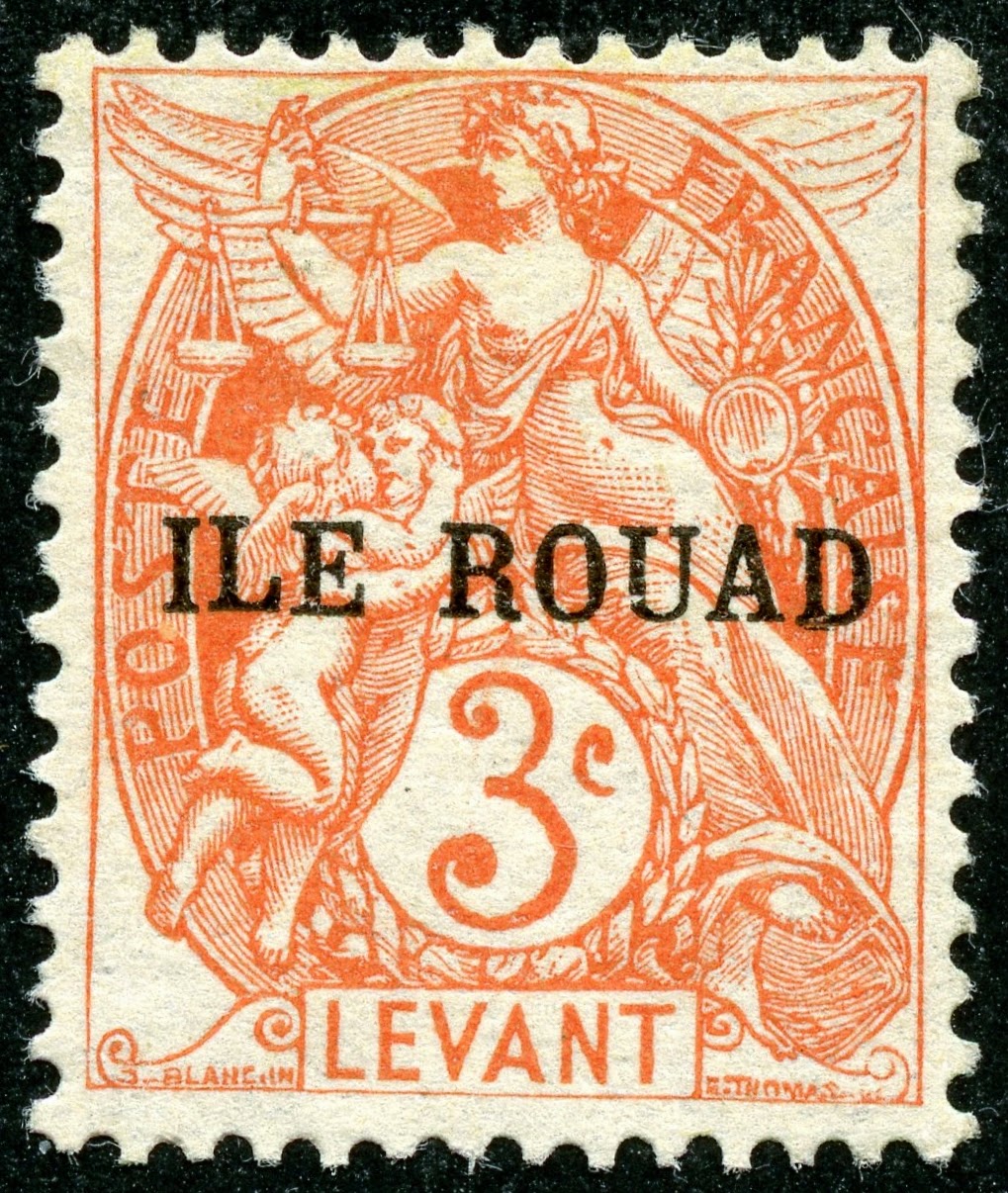 There are no expensive stamps ($10 or greater)  for Rouad in BB. 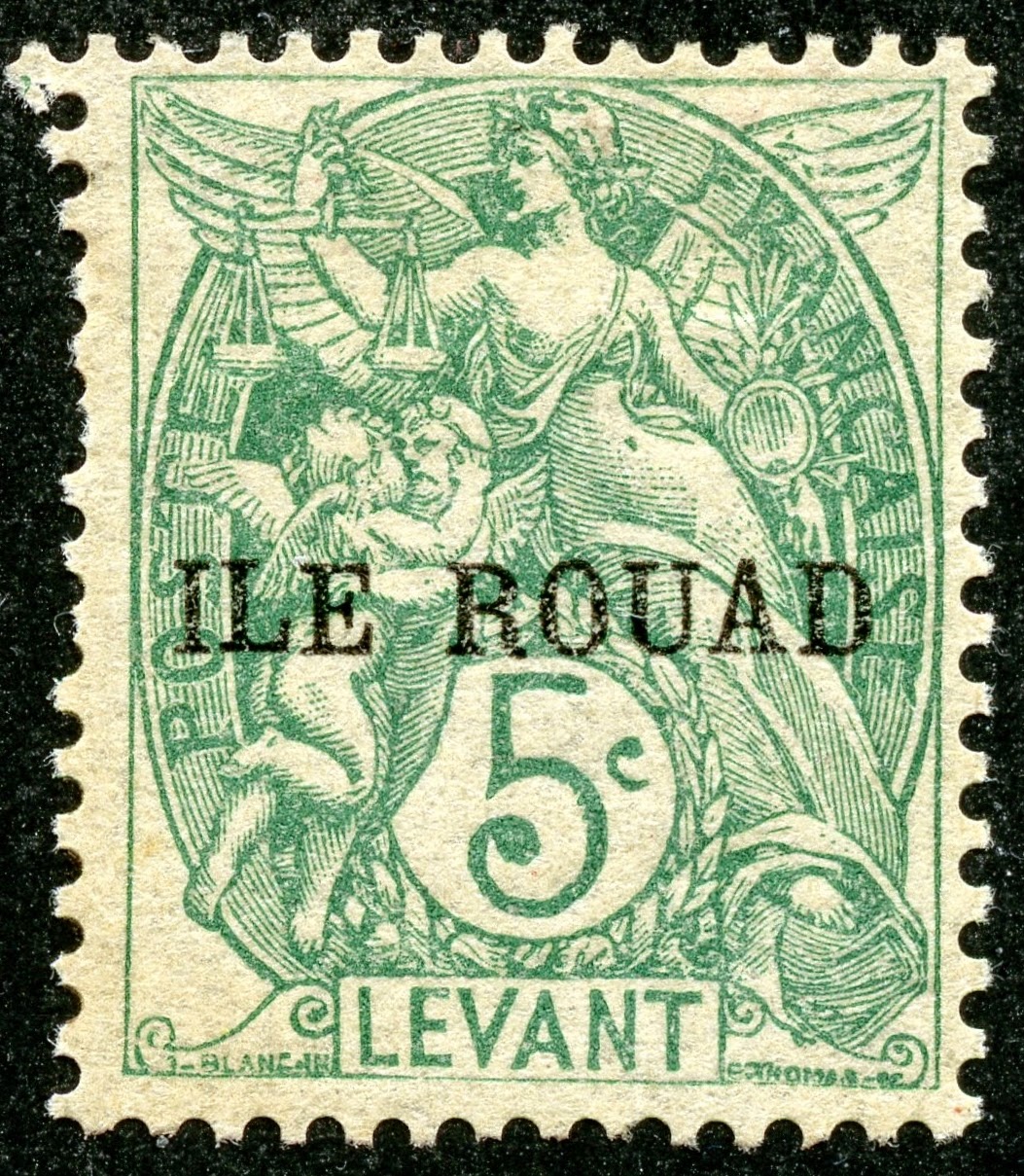 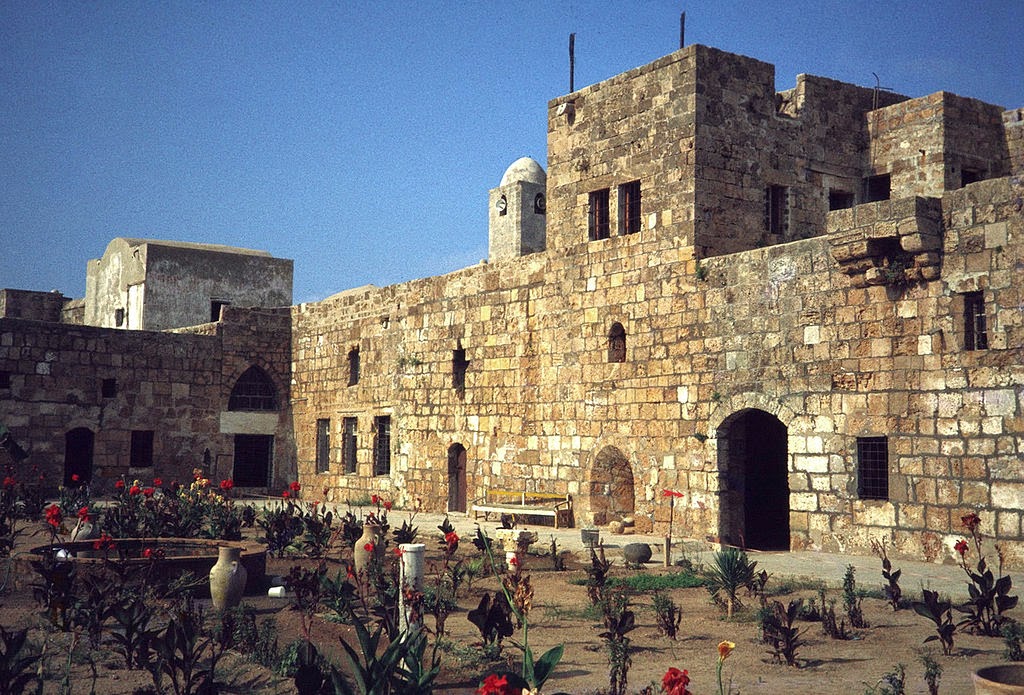 Ottoman Built Fortress of Rouad
Used as a prison during the French Occupation
Posted by Jim at 3:22 PM