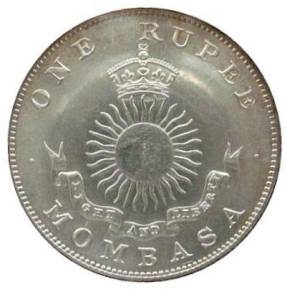 Tracking present day Kenya through BB requires stops at four album headings with stamps from five different authorities. They are:

IBEAC, a commercial association that held an Imperial charter, was founded to develop trade in East Africa. The charter permitted a postal system using the company’s name, the first of its kind for a British commercial enterprise. Stamps and coins were issued, both emblazoned with a sun radiant beneath St. Edward’s crown. An apt choice for the company’s badge, the sun rises handsomely on Kenya’s shore from the Indian Ocean at 0° latitude. The red one rupee (see supplements) earned its canceled status in Mombasa.

Currency was denominated in annas and rupees, likely because the coast of Kenya had many settlers from India.

The promise of IBEAC’s motto, “Light and Liberty”, went largely unfulfilled. By the mid-1890s bankruptcy loomed, made inevitable by military misadventure. The British Foreign Office took control and BEAP was proclaimed. BEAP issued new stamps with the likeness of Queen Victoria, appearing older than in any contemporaneous Great Britain images, between two British lions rampant. A single lion became BEAP’s badge. Annas and rupees continue as the denomination.