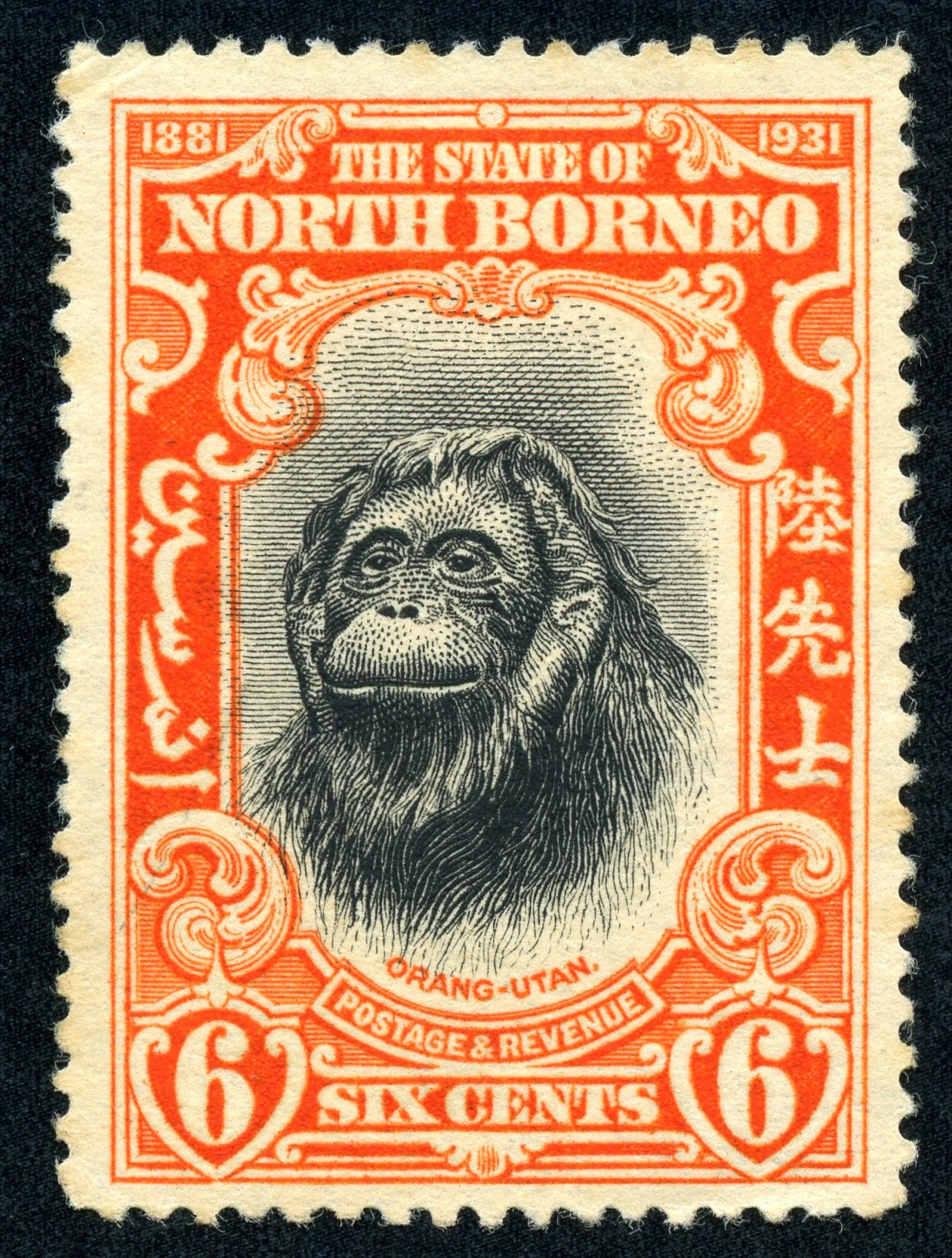 1931 Scott 186 6c orange red "Orangutan"
Quick History
If you can tear yourself away from the stunning vignette of the orangutan, you will notice the various scripts on the frame of the stamp.

The script found on North Borneo stamps is Jawi  (not to  be confused with Javanese ), an Arabic alphabet for the Malay language. Of course, English and Chinese script is also there. 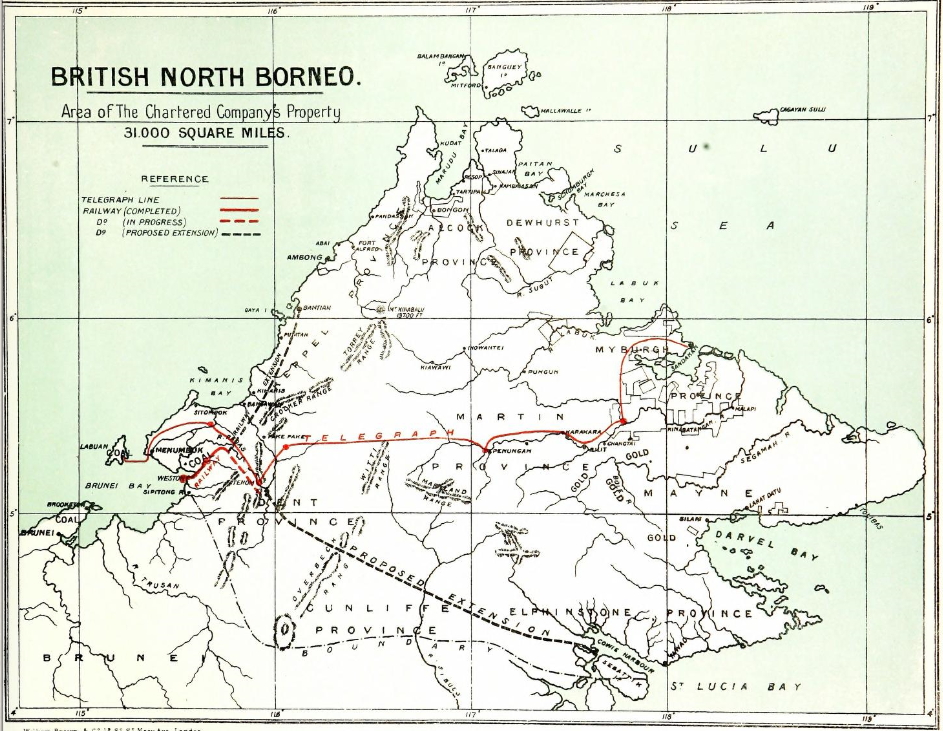 The North Borneo Chartered Company administered the state by having the native chiefs manage at the grassroots level, while the British authorities held the head posts. 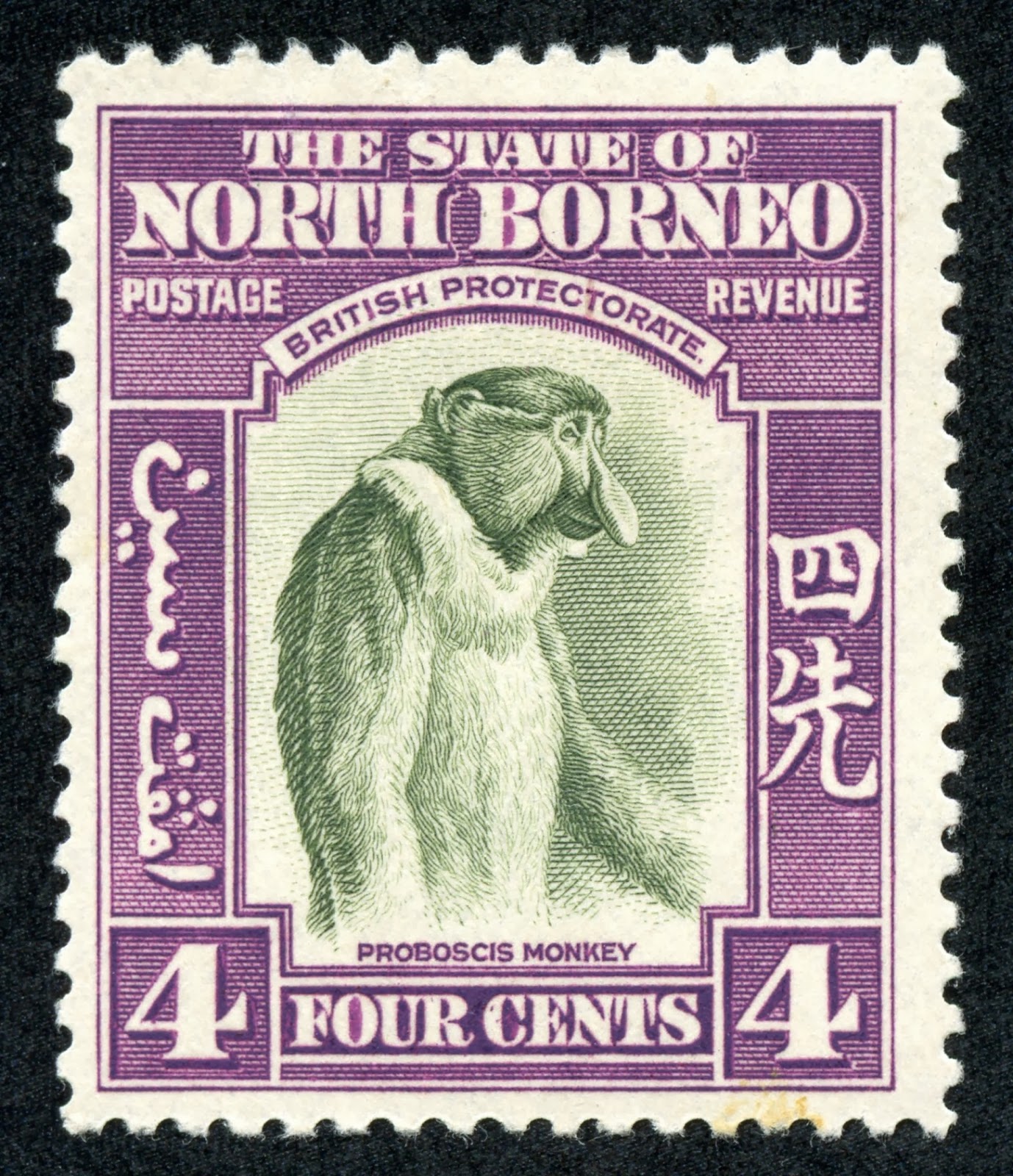 1939 Scott 196 4c rose violet 7 olive green
"Proboscis Monkey"
Into the Deep Blue
This blog post, the second, is a continuation of a review of the lovely, mostly bi-colored stamps of North Borneo. 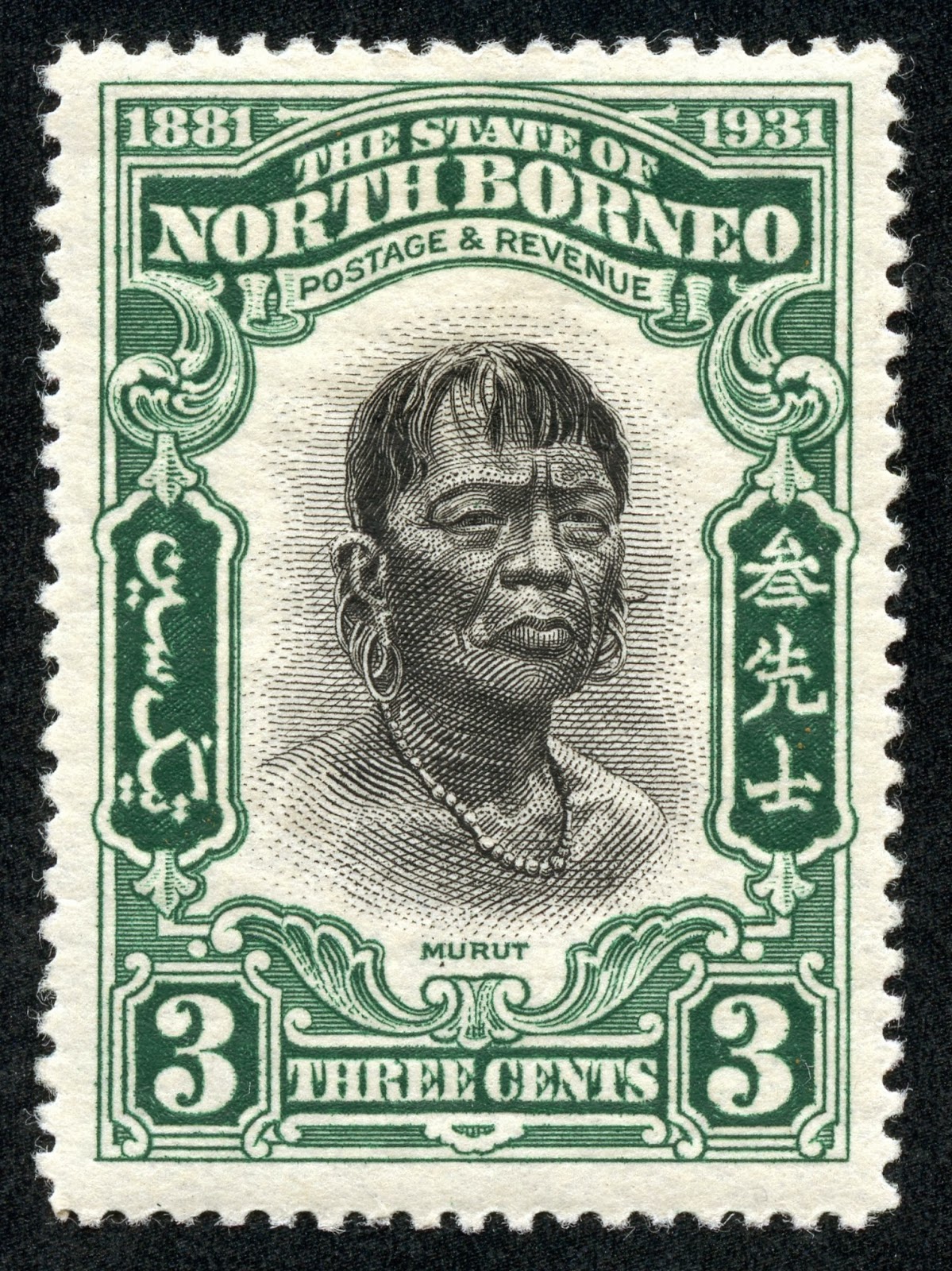 1931 Scott 185 3c blue green "Murut"
The Murut, meaning "hill people", are an ethnic tribal group, who were among the last to give up headhunting. Collecting heads of enemies was an important part of Murat cultural practices. If one wished to be married, one was required to present at least one head to the girl's family.

It gives an entirely new meaning to the phrase, "Head of the Household". ;-) 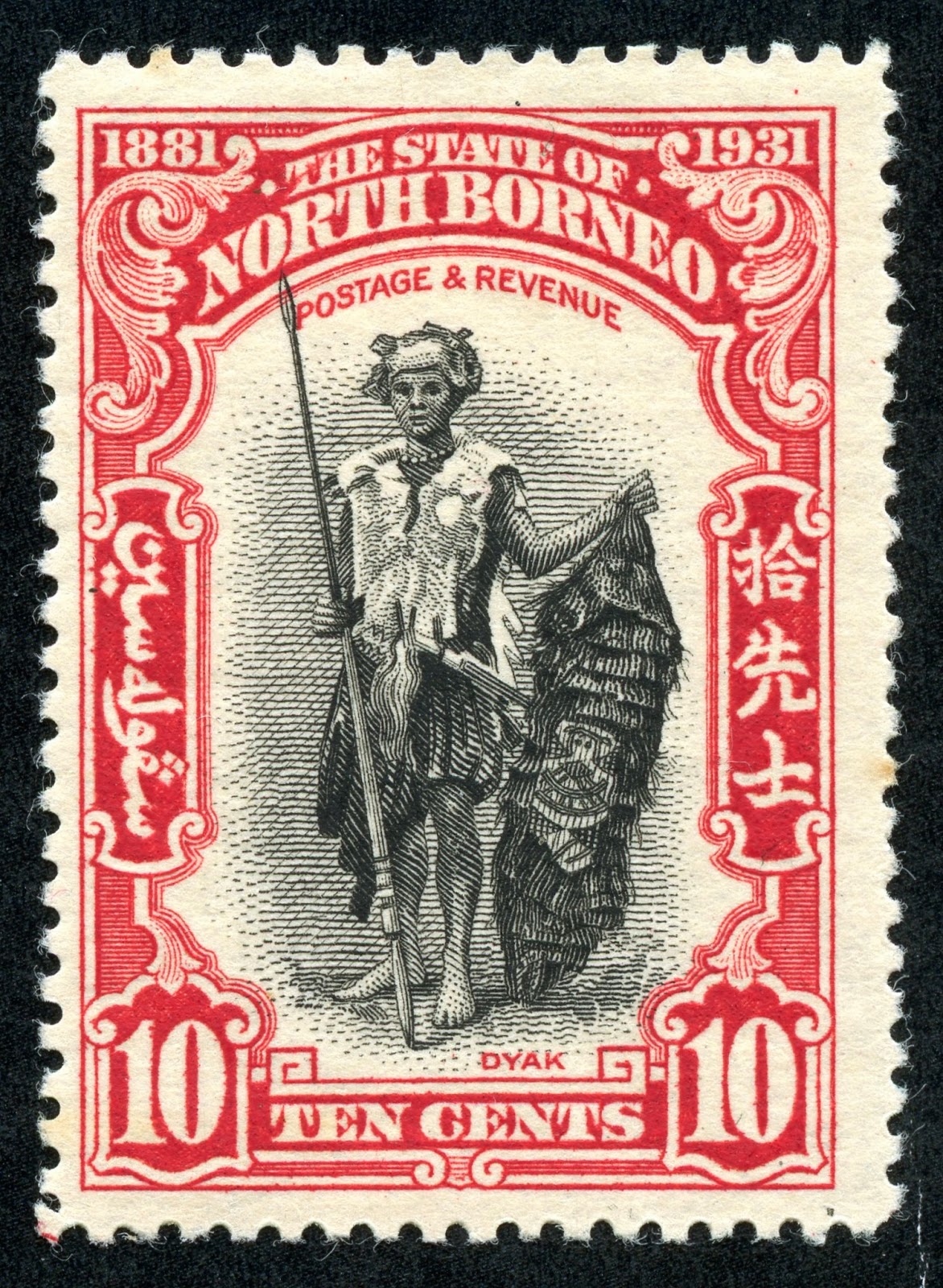 1931 Scott 187 10c carmine "Dyak"
The Dyak (or Dayak) were a native people of Borneo, and the some 200 subgroups all spoke dialects of the Dayak language. They initially practiced Animism, a belief that animals and plants possess a spiritual core. 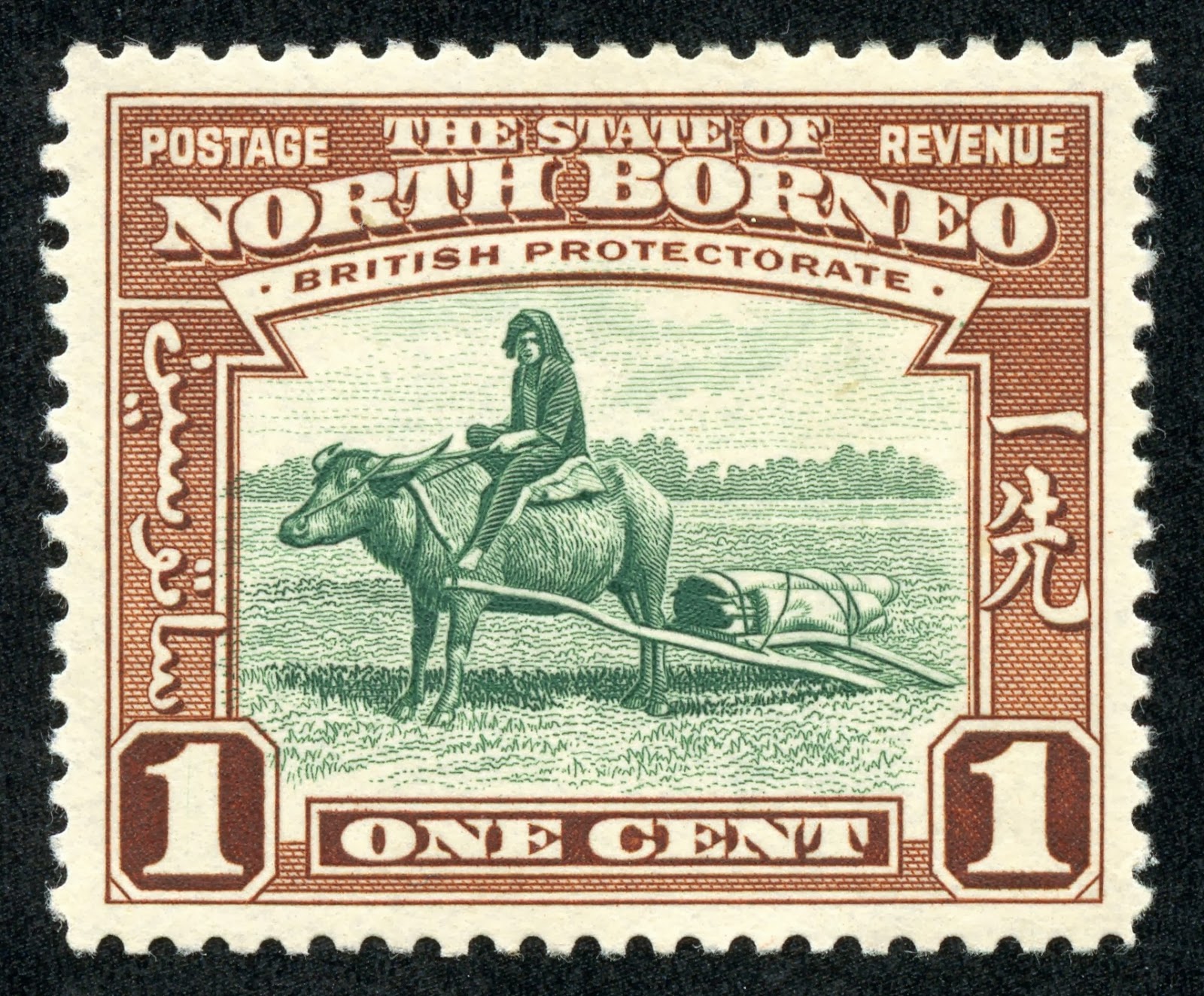 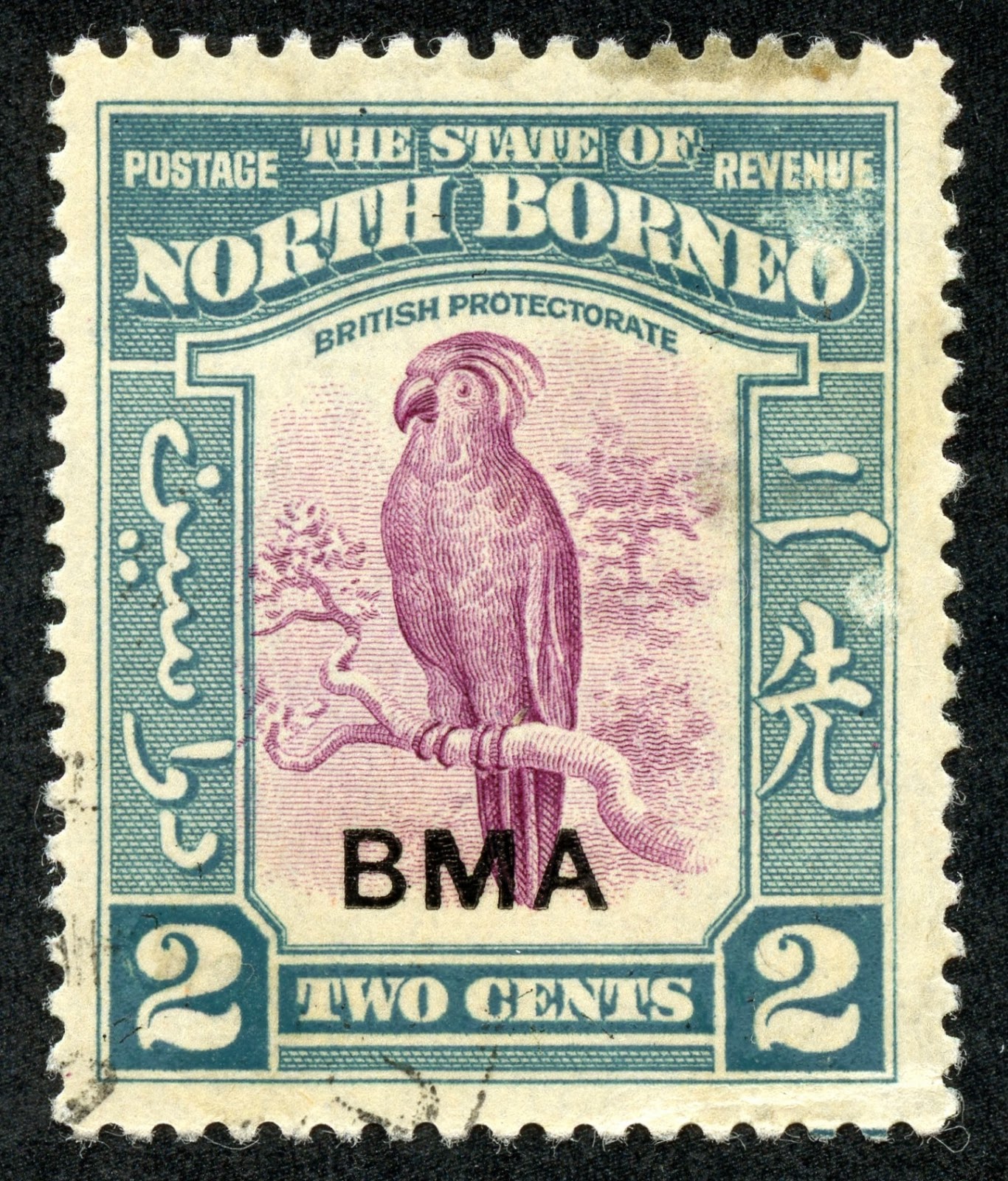 Japanese forces occupied North Borneo between 1942-1945.  With liberation (by the Australians), the country was placed under British Military Administration until the restoration of government in 1946. 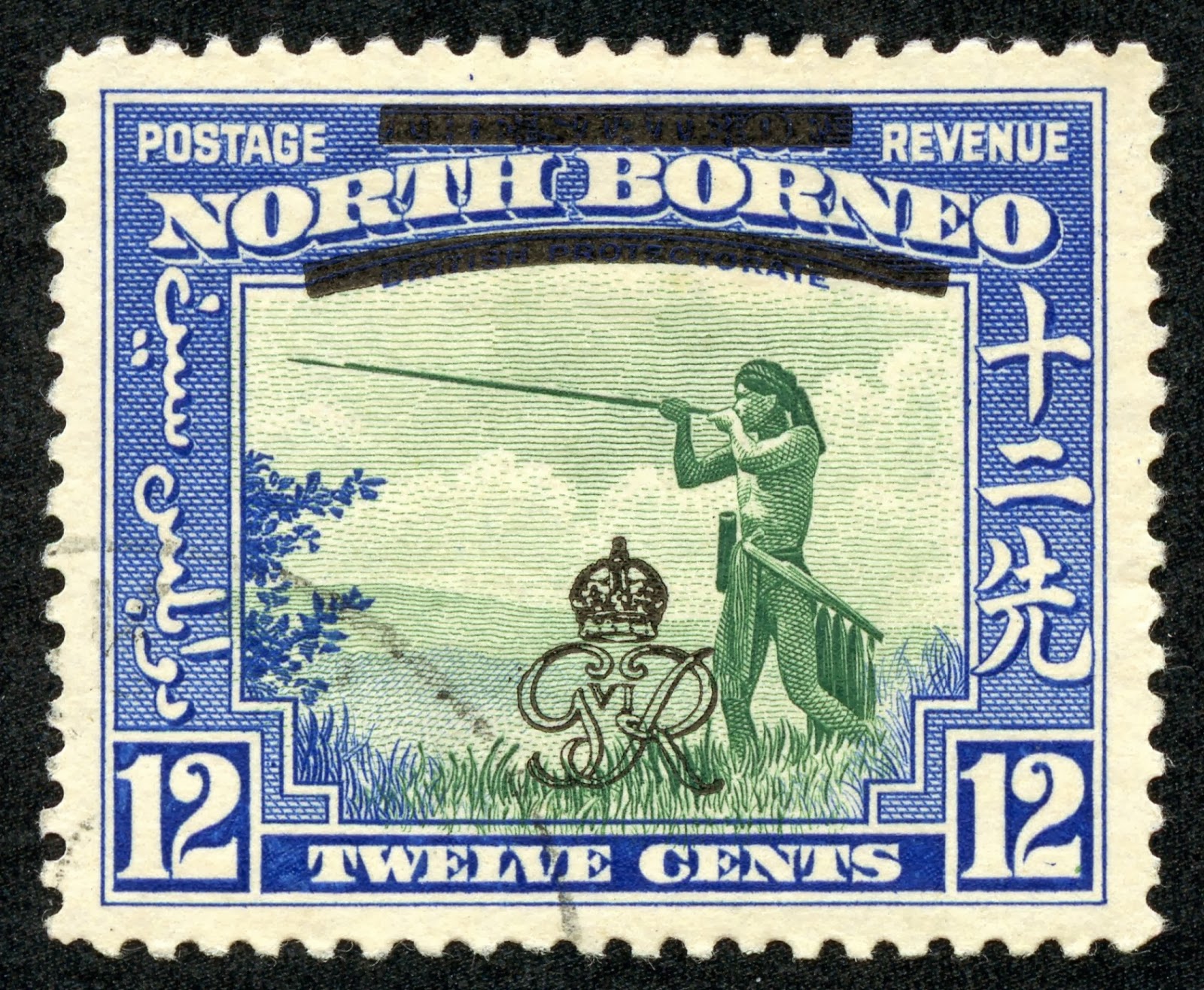 1947 Scott 230 12c ultramarine & green
Overprinted on 1939 Scott 200
"Murut with Blowgun"
A 15 stamp issue was created in 1947 by placing bars over "British Protectorate" and "The State of". That is because the North Borneo Chartered Company was no longer administering North Borneo. In fact, in 1946, the lands, along with Labuan, became the Crown Colony of British North Borneo. Only in 1963 was North Borneo granted self-government. And then, it was to join the Federation of Malaysia. 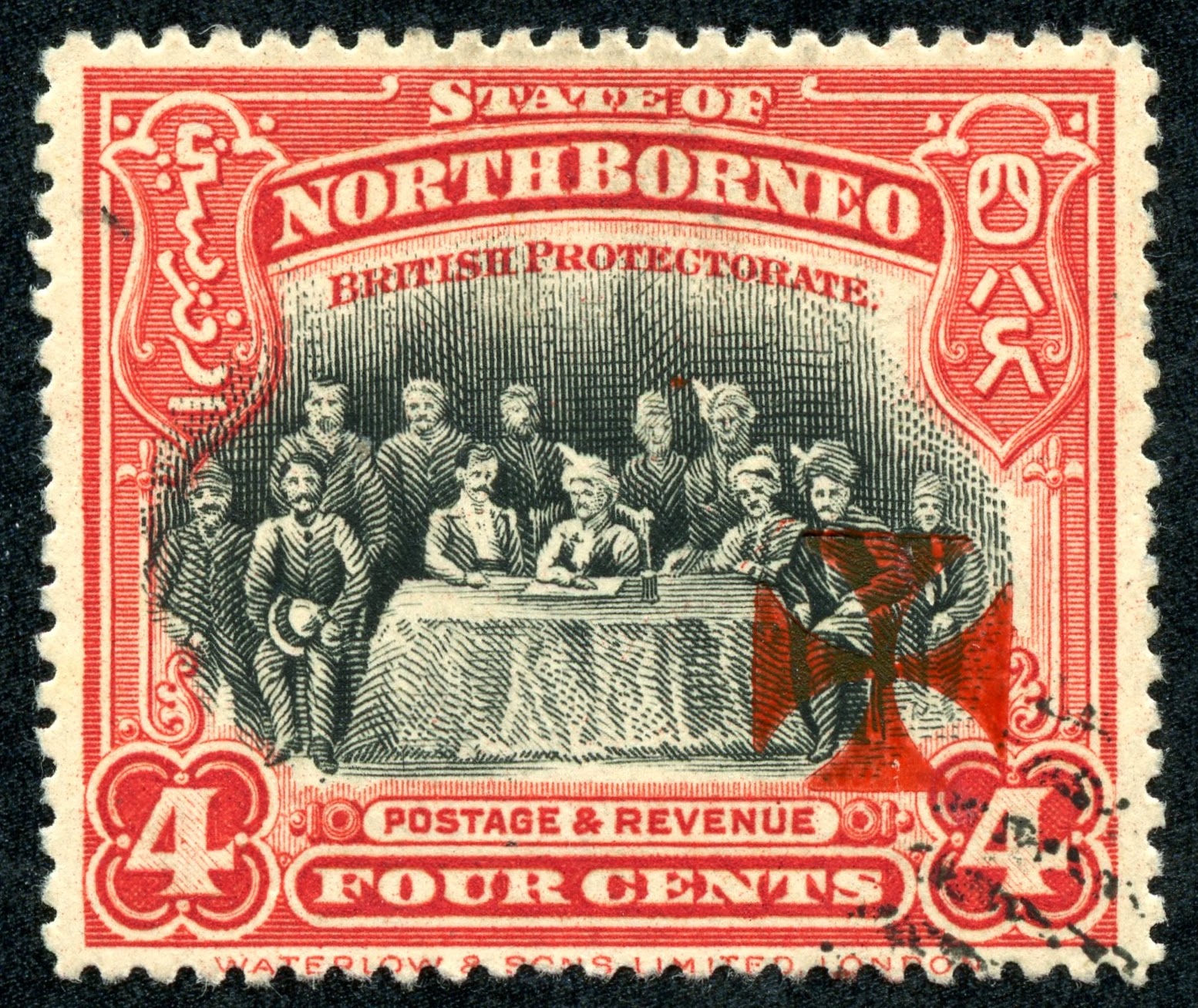 1916 Semi-Postal Scott B4 4c dull red
"Meeting of the Assembly"
A 13 stamp semi-postal issue was produced in 1916 to help raise funds for the WWI wounded and veteran's survivors. But two-thirds of the shipment was lost from London to Sandakan, as the transport was sunk by a submarine. Postally used specimens are rare. 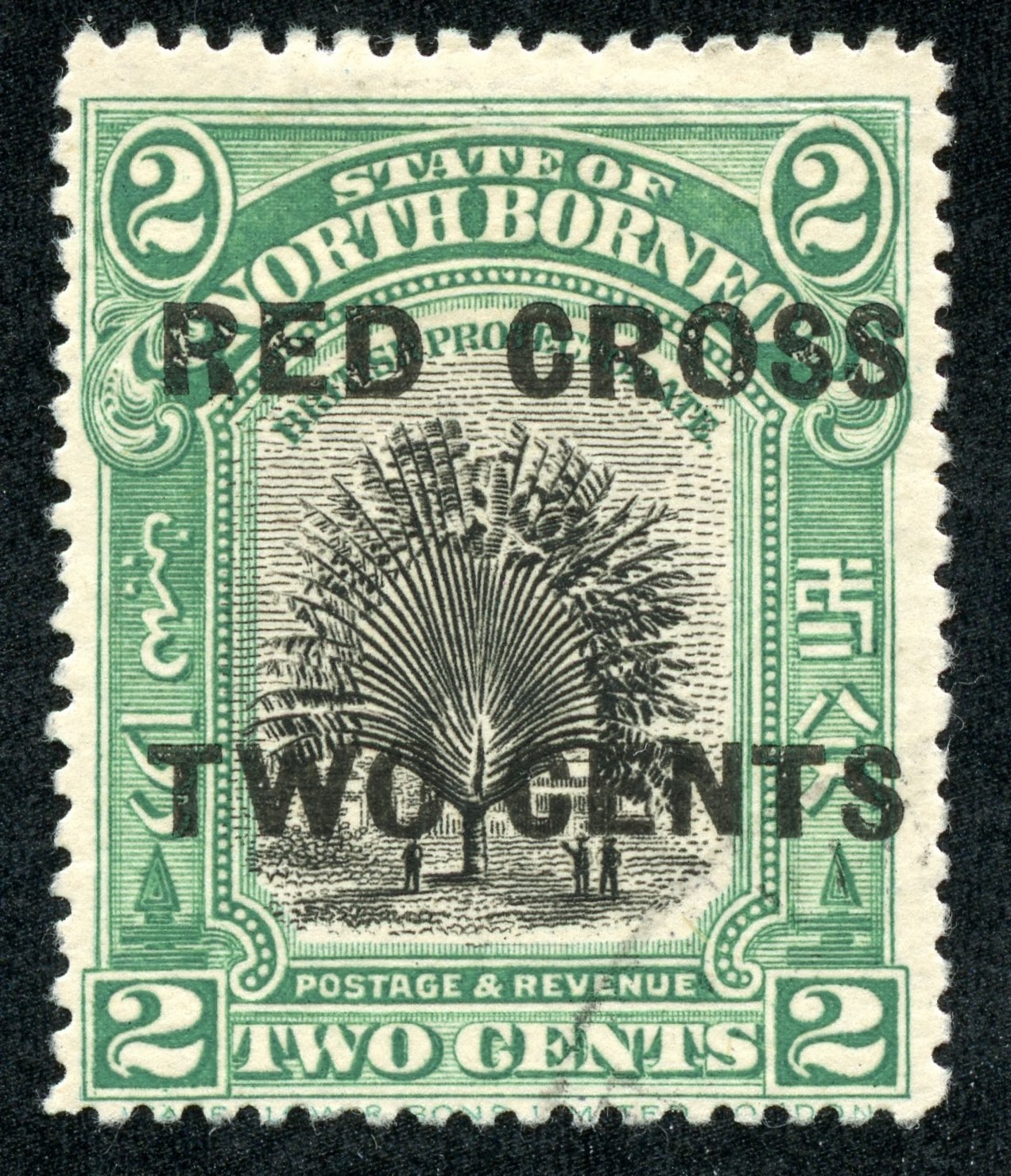 Actually not a true palm, but a member of the bird-of-paradise family, the sheaths of the stems could hold rainwater, and then serve as a drinking supply for travelers. 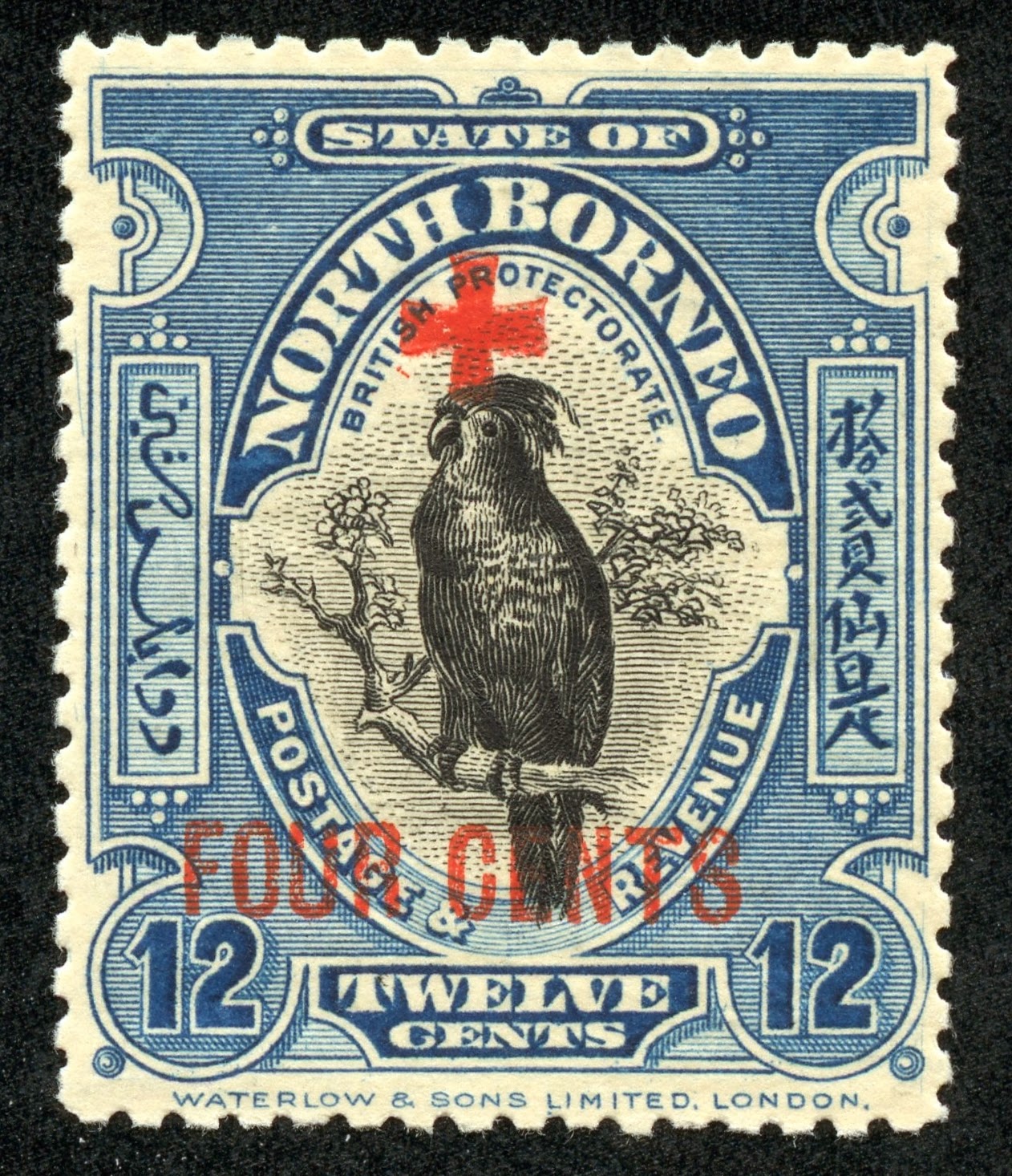 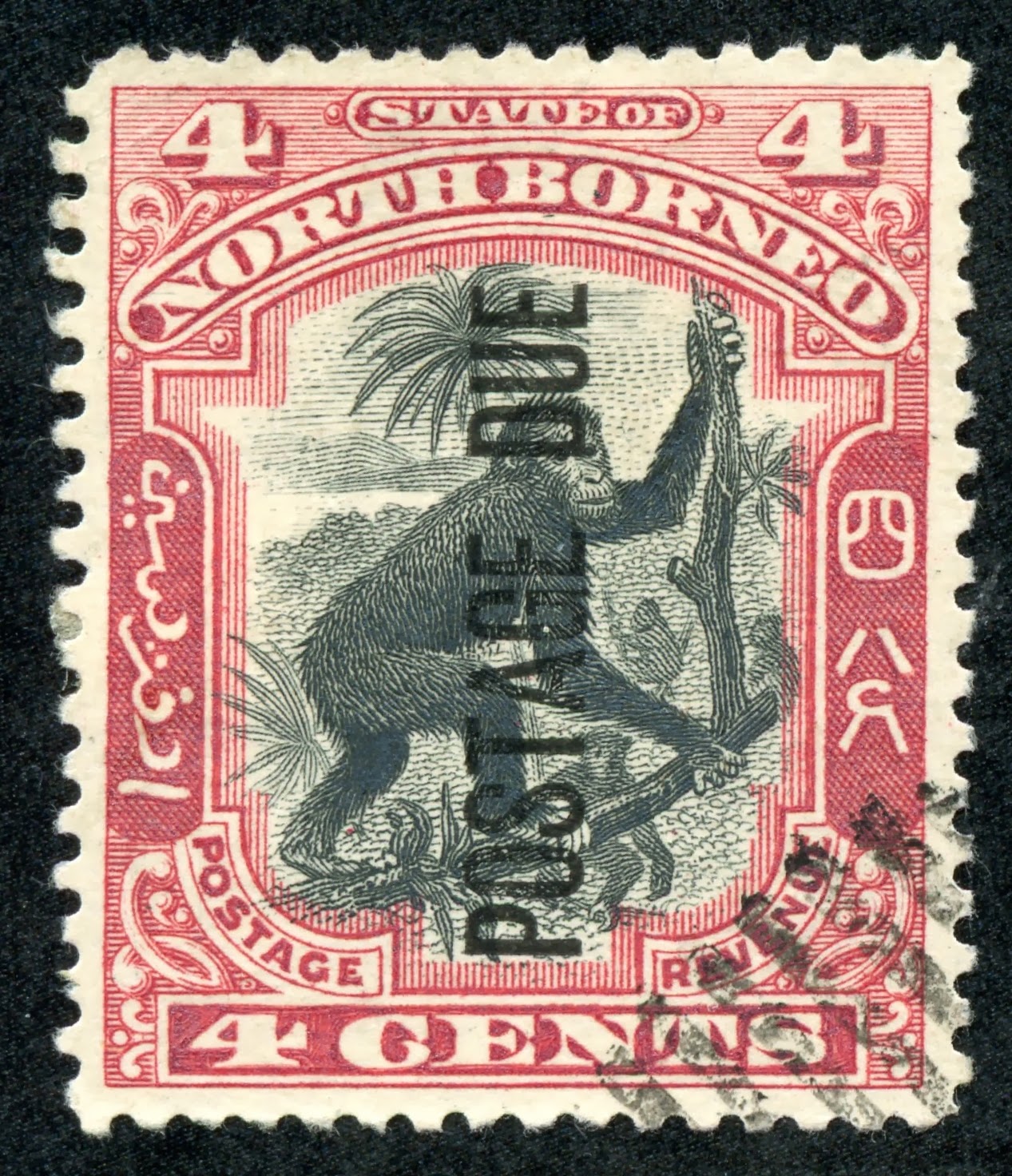 1926-28 Scott J41 2c lake & black "Traveler's Palm"
A nine stamp overprinted issue was released between 1926-28.  Lovely, but I can't help but think there had to be a lot of mail delivered in North Borneo without adequate postage. ;-) 1941 War Tax Scott MR1 1c red brown & dark green
Interestingly, War Tax stamps were not released in North Borneo during WWI (Semi-Postals were issued instead), but were for WW II. The two overprinted War Tax stamps produced in 1941 are CV <$1. 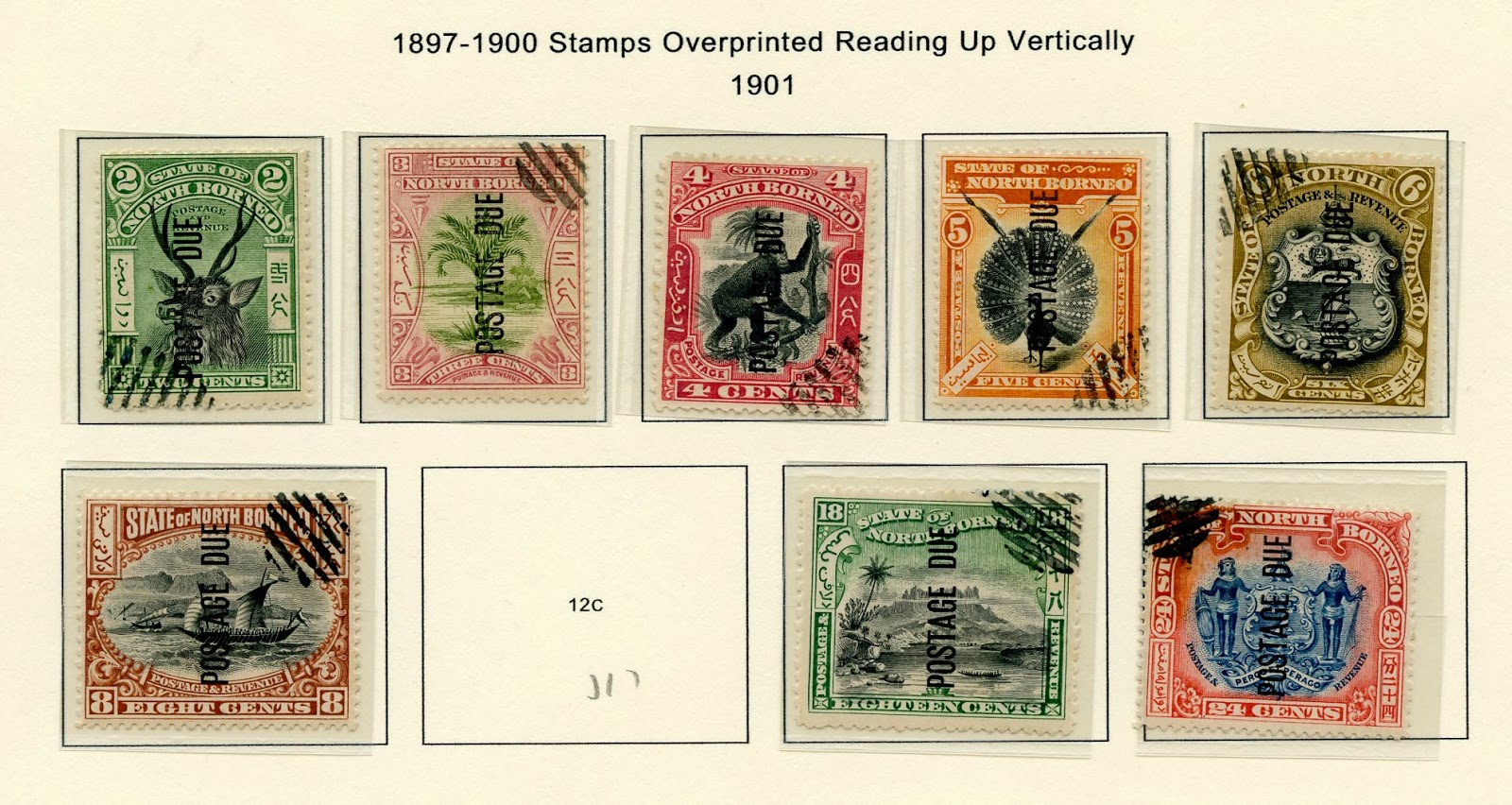 1901 Postage Due Issue in Deep Blue
I mentioned in the first North Borneo post that Steiner does not provide pages in the "classic" package for Japanese Occupation issues- some 47 stamps. I do not have any occupation stamps at the moment, but 18 are CV $3+-6+. One will need to print these pages from the Steiner "world" package. 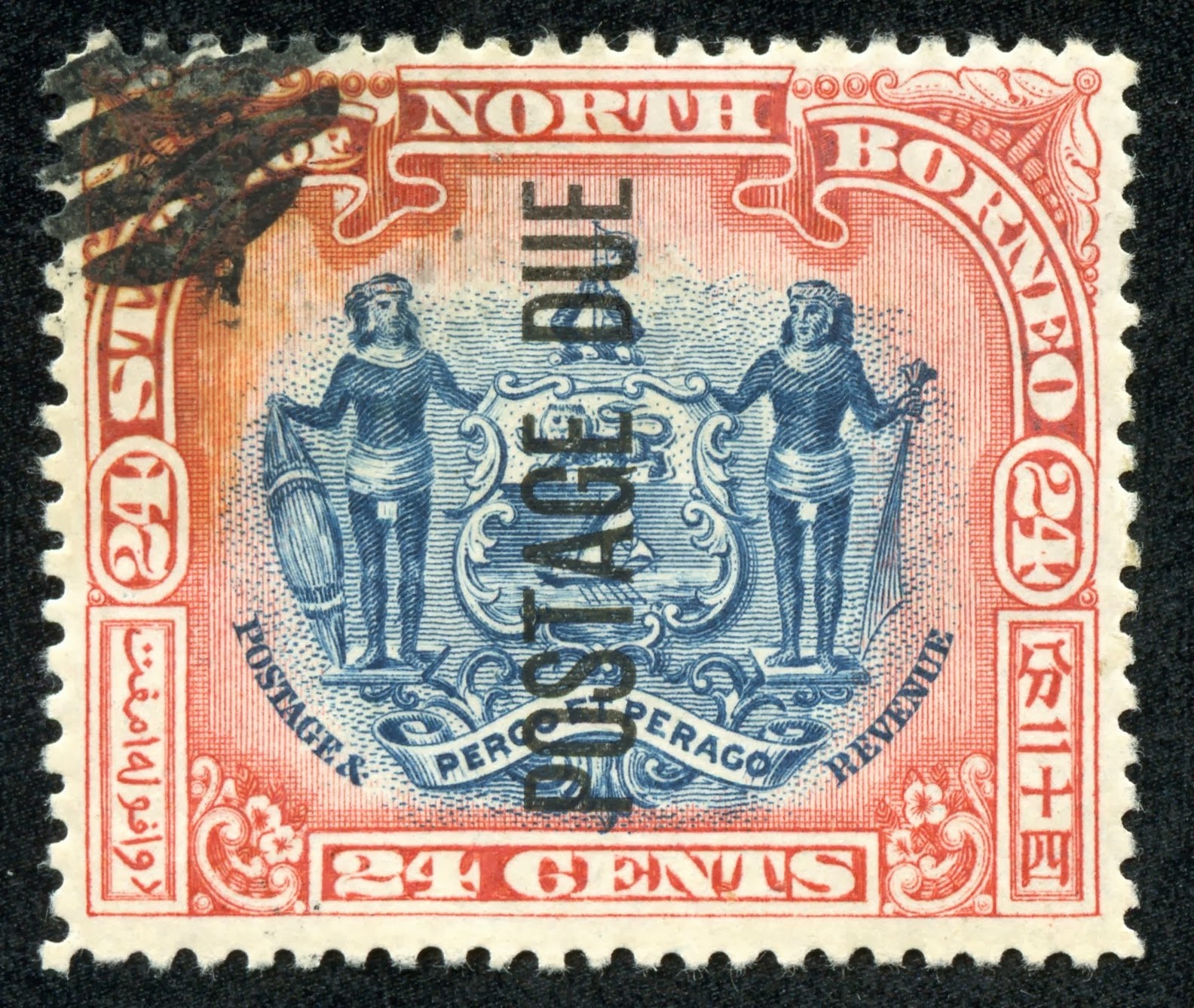 1901 Postage Due Scott J19 24c red 7 blue, overprinted
"Coat of Arms with Supporters"
Big Blue
The Big Blue editors have not changed the four page presentation for North Borneo since at least 1941. What is nice is there are only two stamp spaces that require CV $10+ stamps, and, with the abundance of North Borneo CTO stamps in collections, many of the spaces are used. 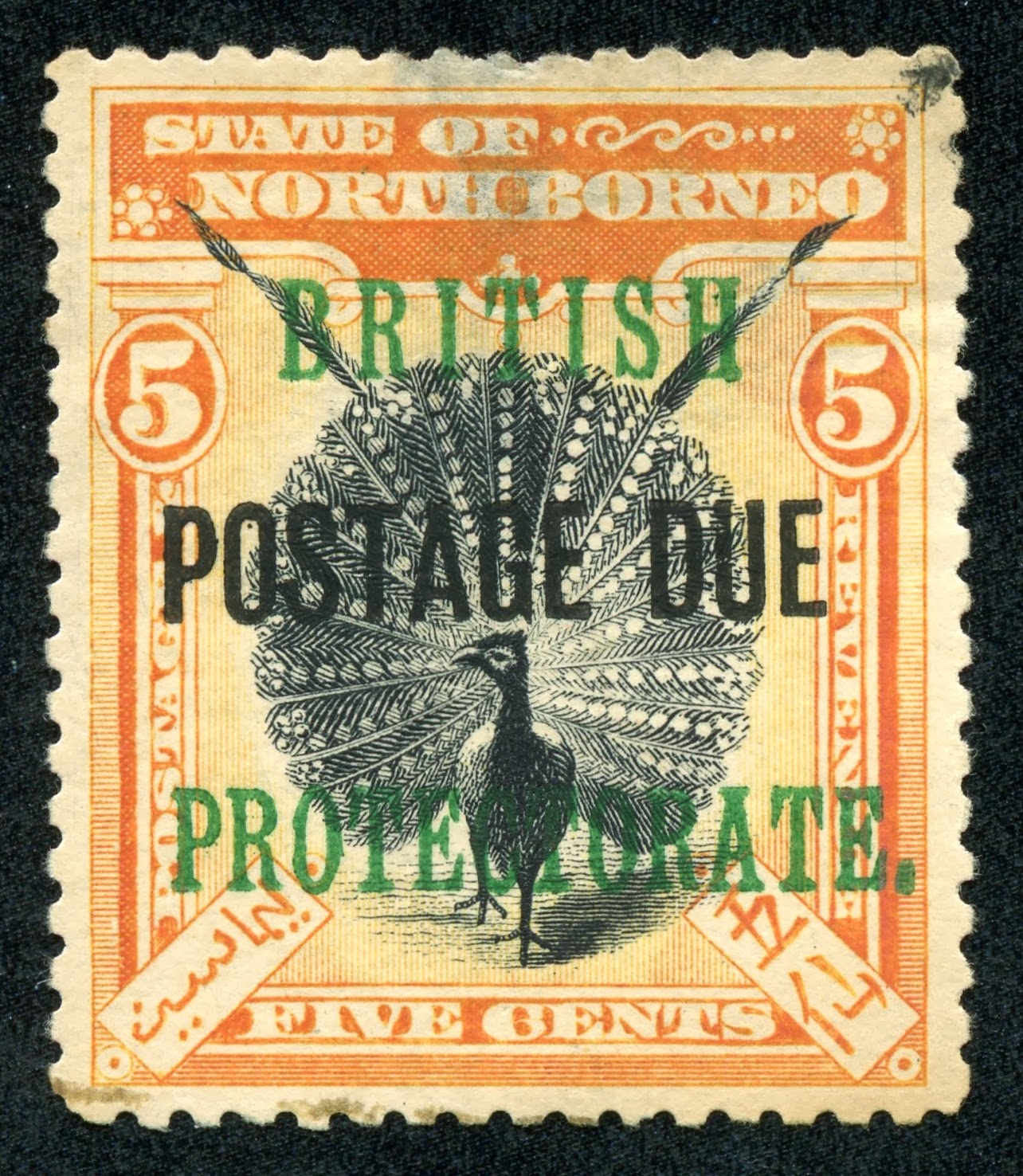 1903-11 Postage Due Scott J24 5c orange 8 black
Overprinted on 1901-05 Scott 109
"Argus Pheasant"
Out of the Blue
North Borneo is almost the ideal country to collect for the WW classical collector on a budget. And the stamps themselves- well, do I really need to say anything? ;-)