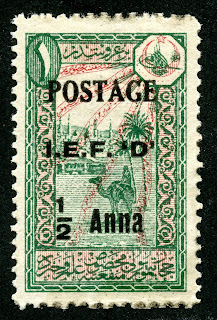 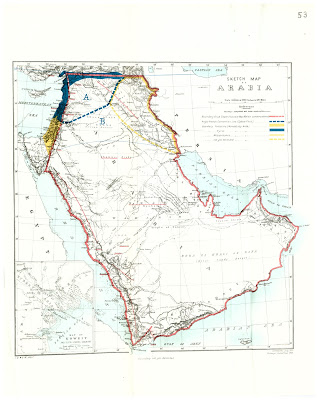 Proposed British Mandate map for Mesopotamia 1921
An armistice was signed on October 30, 1918, but the British continued to march and entered Mosul and the rich oil field between November 1- 14, 1918 ( Different sources give different dates).

A British Mandate for Mesopotamia was instituted on April 25, 1920, but widespread rioting occurred throughout Iraq in 1920. The British administration continued, but the Kingdom of Iraq was then created under British guidance in 1922. Iraq became fully independent in 1932.

This blog will focus on the British occupation issues of 1917- 1922, as well as the Mosul issue of 1919. All of the stamps consist of surcharged/overprinted stamps of Turkey. One will find these stamps under "Mesopotamia" in the Scott Classic catalogue. The Stanley Gibbons catalogue files all entries under "Iraq". 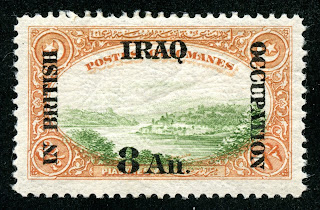 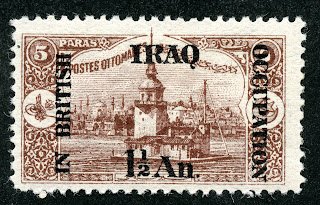 1918-20 Scott N31 1 1/2a on 5pa violet brown
Issued under British Occupation
Between 1918-20, fourteen stamps were overprinted/surcharged on the 1914 pictorial issue of Turkey. They have the curious phrase "In British Occupation". This foreign occupation, as perceived, was not welcomed by many of the inhabitants. 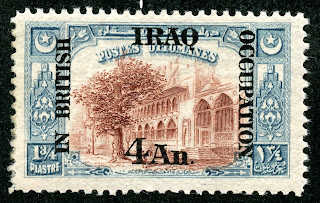 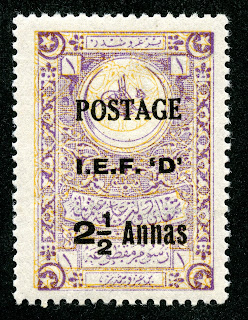 1919 Scott N45 2 1/2a on 1pi violet & yellow
Mosul Issue
For Mosul, an overprinted/surcharged issue was produced in 1919 using Turkish fiscal stamps. The eight stamp issue has a CV of $1+-$4 for seven stamps. 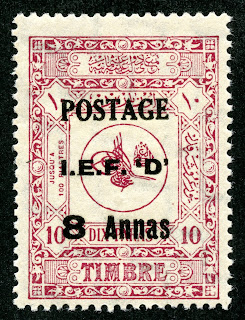 1919 Scott N49 8a on 10pa claret
Mosul Issue
Neither Scott or Stanley Gibbons explains the "I.E.F. 'D'". Since there were both Indian and British occupation troops, " International or Indian? Expeditionary Force" is my best guess. Any readers know? 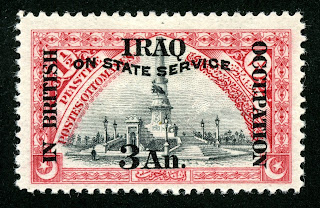 For a continuation of the stamp issues for Iraq, see the Iraq blog post. 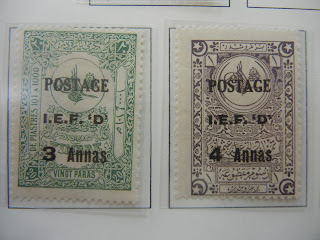 1919 Mosul Issue stamps in Deep Blue
Deep Blue (Steiner) has seven pages for Mesopotamia 1917-22, and includes all the major number spaces in the Scott catalogue. I suspect the two pages for the "Bagdad" issues will be empty for a long time. ;-) 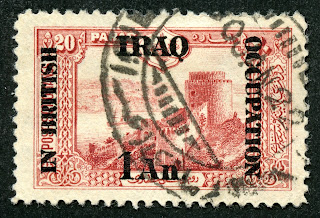 In the '69, Mesopotamia is after the Maldive Islands, and on the same page as the beginning of Mauritania.
The 1940s editions have the same coverage, but it is located between Mongolia and Mauritania.

Observations
• No expensive stamps- actually an accomplishment. ;-)
• BB does not cover the 27 "Bagdad" overprinted issues of 1917. These issues are quite expensive, and one wouldn't expect coverage. ;-)
• I found some 11 stamps (including officials) that are CV <$1-$1+, and are not in BB. Big Blue could probably double the coverage without raising the average CV that currently have spaces. 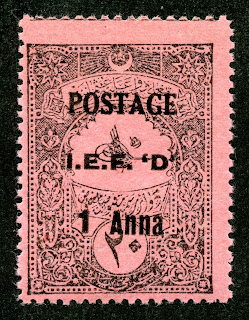 1919 Scott N44 1a on 20pa rose
"Mosul Issue"
Out of the Blue
The stamp issues here represent an interesting interim period between the end of WW I, and the creation of Iraq proper in 1923. The overprinted/surcharged stamps are quite attractive. And, there are enough inexpensive ones, so even the WW classical generalist can have a small collection. ;-)