Bud's Big Blue
Bud's Observations
The following message arrived as I working on the Middle Congo post. It is written in Kikongo-Kituba, a creole language of the Kongo and Ndundu peoples who lived in the equatorial forests of the Republic of the Congo (aka Congo-Brazzaville), formerly called Middle Congo and even more formerly the French Congo. I know nothing about Bantu/creole languages so I had to pay for a translation.


I’ve copied a few exact words from the message in italics. 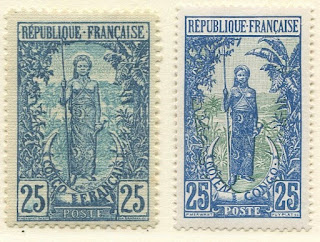 I told Bud “Stop! I want to write this post, not you!”

I am ndumba (the young woman) whose kifuanisu (picture, likeness) shows up many times in your Big Blue albums. You make a mistake to call me “Bakalois woman.” Mpilá ve! (No way! That’s impossible!) My language has no such word, and no other language has it, except Haitian Creole where it means dried cod fish. I am not Haitian and not a nkentó mbizi ya kuyúma (dried fish woman).

I am a nkongo (hunter) of the baladi a Bakongo (Bakongo tribe). See my dikongó (spear) and throwing club?  I am kuwa makasi nswalu ve (slow to anger) but can kupasula musuni bonso bambwa (tear flesh like dogs???) if I need to. I do not hunt elephants or sell dínu ya nzawu (elephant ivory).

My picture got reengraved after they quit calling where I live the French Congo. I like the second picture best. The ngò (leopard) got reengraved, too.

My picture got used on stamps because the French wanted make people think they were very kind to us, and not like the Belgians who hurt and killed many of my people in what they call Belgian Congo. They wanted my kitoko (beauty) to say that we are not living in bumpika (slavery) but are being civilized. Our great French hero, di Brazzà, proved those claims untrue just before he died in 1905. No one paid attention to him.

After the Middle Congo ended, my picture was used on stamps of Chad and other places that they call French West Africa, I forget exactly where. You can’t see me very well because of ugly black ink on top of me.

After they no longer used me on their stamps, pictures of some buildings I’ve heard about took my place. One of them helps sick people. I’m glad about that. 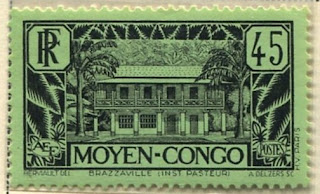 Sadly, she did not sign her message or give a return address. Her handwriting made translation difficult, but I think her meaning is clear enough.

She’s right about being reengraved. The first was done by Benjamin Damman who, although a great engraver for books, did poorly on stamps. The second, by Jules-Jacques Puyplat, improved greatly on the original. Puyplat also redrew and reengraved Damman’s French Somalia stamps.

She’s also right about what Brazza wrote just before he died. Word had gotten back to France about brutal crimes against local people committed by colonial overseers (1905). If true, the reports would threaten to falsify France’s loudly proclaimed “colonial civilizing mission.” Brazza, much trusted by native Congolese, was recruited to investigate. He found massive atrocities, but died on his way back to France. His report did not come to light until many years later.

And, I think she's correct about "Bakalois" being a word invented by stamp collectors. I've found no reference to it except for stamps with her image. 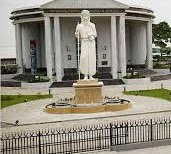 Brazza Monument and Mausoleum, Brazzaville, Republic of the Congo

Jim's Observations
Of interest, Middle Congo had issued 33 postage due stamps between 1928-33, 30 of which are included in Big Blue.

I think it is somewhat surprising- and amusing- how many of the French colonies have a large number of issued postage due stamps. Did they really need that many? . Meanwhile, a literate country like Norway got by with 12 stamps during the same era. ;-) 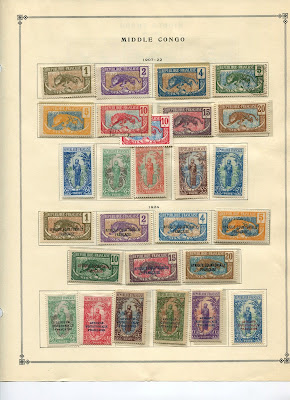 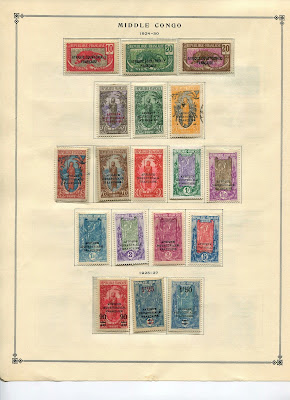 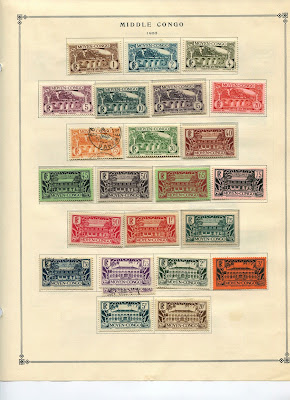 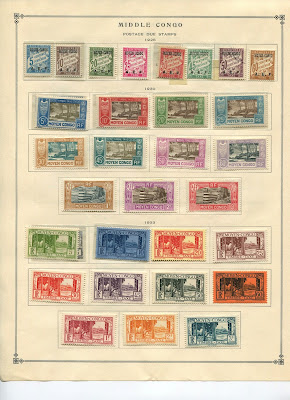 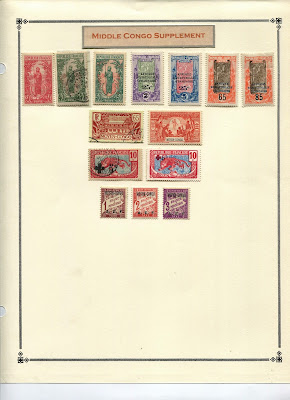