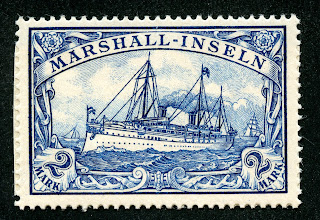 1901 Scott 23 2m blue
Kaiser's Yacht "Hohenzollern"
Quick History
The Marshall Islands in the North Pacific consists of two chains: the Railik (sunset) chain, and the Ratak (sunrise) chain. The some 34 atolls and islands are mostly at sea level.

Marshall Islands
The Marshall Islands were originally claimed by Spain in 1874. But a payment of 4.5 million (and Papal mediation) persuaded Spain to recognize the claim of Germany in 1885. Germany set up a protectorate (which formally became part  of the larger Protectorate of German New Guinea in 1906), but mostly let the Micronesian Iroij (high chiefs) continue to rule local affairs. 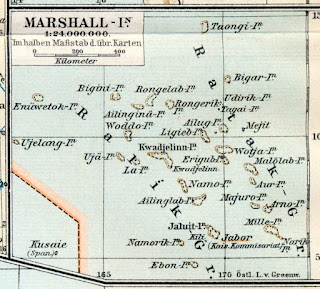 Closeup of Marshall Islands
The Germans set up trading stations on Jaluit and Ebon, where the dried coconut meat (copra) could be sold.

Japan then occupied the islands as an ally in WW I.

Following WW II, the United States assumed control of the islands as part of the Trust Territory of the Pacific Islands.

The Marshall Islands became independent in 1986. 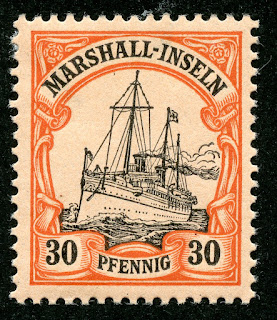 1901 Scott 18 30pf orange & black/salmon
Into the Deep Blue
The 2011 Scott Classic Specialized catalogue has, for the Marshall Islands 1897-1916, 27 major stamp descriptions. Of those, 13 are CV <$1-$5+. A representative collection can be attained by the WW classical collector. 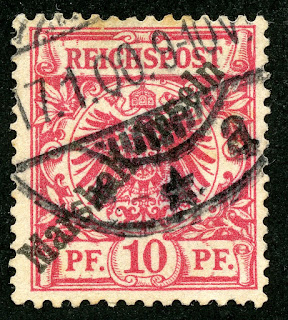 In all cases, used is valued higher than unused.

1901 Scott 15 10pf carmine
The familiar German colonial "Hohenzollern" design stamps were issued for the Marshall Islands, unwatermarked, in 1901. CV for the 3pf-80pf denominations (nine stamps) is a modest <$1-$2+. 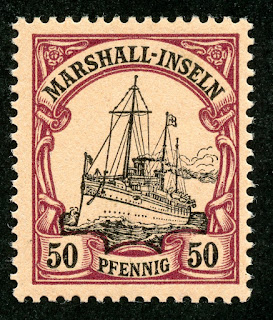 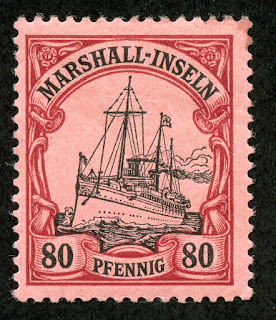 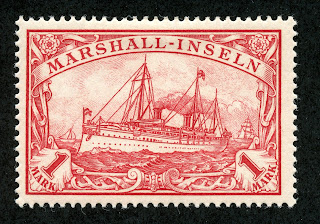 1901 Scott 22 1m carmine, engraved
The 1m-5m denominations (four stamps) are in larger horizontal format, and are engraved. An absolutely stunning design and stamp. CV ranges from $3+-$100+. 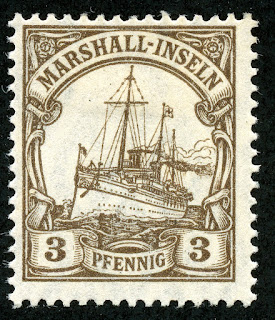 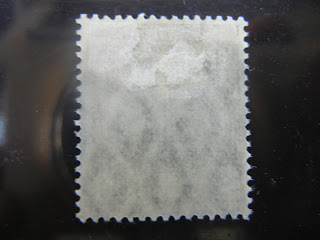 Watermark 125 "Lozenges"
For completeness sake, here is an example of the "Lozenges" watermark.

The German colony issues were the last for the Marshall Islands, until they produced their own issues in 1984. 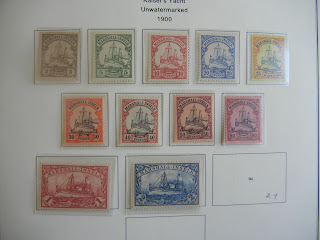 1900 "Hohenzollern" set in Deep Blue
The Deep Blue album (Steiner) has two pages for the Marshall Islands, and covers all the major issues. 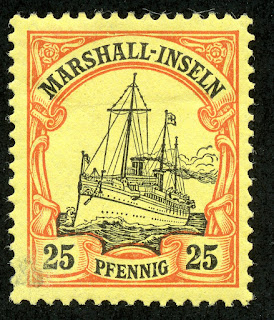 1901 Scott 17 25pf orange & black/yellow
Big Blue
Big Blue '69, has two lines of one page for the Marshall Islands, and is found on the same page as the Marianas Islands, and after Macao. There are 13 spaces for the stamps. But there is some confusion, as we shall see soon. 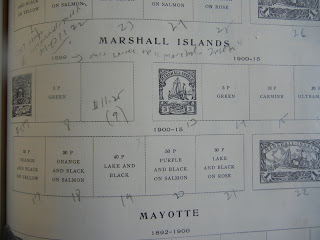 BB provides three spaces for these overprinted issues. Recall, that the 1897 issue has a much higher CV.

The three spaces are date labeled "`1899": so far, so good, as this issue is the much cheaper one. 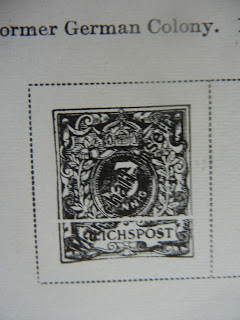 "Marschall_Inseln" Overprint
1897 Scott 1 3pf dark brown @ $140!
But the illustration shows the 1897 3pf  with the "Marschall-Inseln" overprint! The 5pf green descriptive space, and the blank space can potentially be filled with either issue. !

One can legitimately argue that the 1899 date specification takes precedence here, and treat the 1897 illustration as a BB blunder. And that is what I will choose to do for the checklist. ;-) 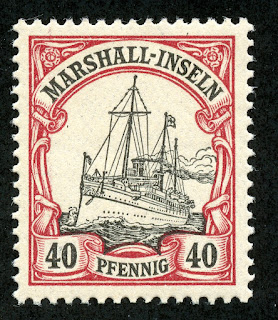 1901 Scott 19 40pf lake & black
Out of the Blue
Really striking German colonial stamps, although I was not too successful obtaining additional information about the historical 1897-1914 German years for the Marshall Islands.

Note: Maps and Atol pic appear to be in the public domain. 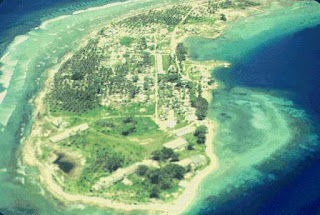