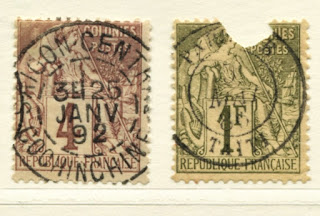 I tried to collect one cancel from each, but that’s still a work in progress. The header shows two of them, though, one with a large nick. It raises the question of whether or not damaged stamps should be displayed. I kept it solely because of the Tahiti cancel.

Most colonial stamps follow a progression, and the French colonies as a whole provide interesting tracking of these changes. First are stamps of (or very similar to) the colonizing country’s, followed by overprints on these denoting specific colonies; then come insets inscribed with the colonies’ names on generic stamps.

About 1900, colonies begin getting distinctive stamps of their own, often with local scenes and people. but designed according to the aesthetic of the colonizing country and having insignia representing colonial dominance -- the “RF” on French colonies’ stamps, for example. King George V was fond of this practice for British colonial stamps.

By the 1940s some native colonial leaders begin to appear and, in the 1950s and 60s when independence movements were in full swing, former colonies issued stamps according to their own political and esthetic tastes -- hot colors, local leaders, scenery of local importance.

For a display of rarer French colonial stamps, see:
https://www.sandafayre.com/rarestamps/rarefrenchcoloniesstamps.html

Jim's Observations
"French Colonies" here strictly refers to the parts of the French Empire, the colonies, that did not have stamps of their own. For the stamp era we are concerned about, the use was between 1859-1906.

The distinguishing feature of the Colony stamps were, prior to 1880, they were issued imperforate, while the French motherland version was (usually) perforated. The Postage dues (1884-1906) were also issued imperforate, while the French version was perforated.
Nevertheless, identifying Colony stamps is very difficult for certain issues, being virtually identical to a French version. The collector will look at imperforate vs perforate, or color (usually a poor determining factor, but read on), or finding a postmark on a used stamp.
One experienced collector reminded me that the French mainland imperforate issues date from 1849-1952, while the French Colonies imperforate issues were printed in 1871-1876. So, although the same plates were used, the color tints are quite different for the periods. Compare the colors of the possible French Colonies stamps with the mainland circa 1870+ perforated variety, and the color tints should be similar. A very good tip. 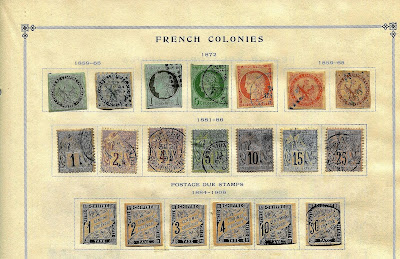 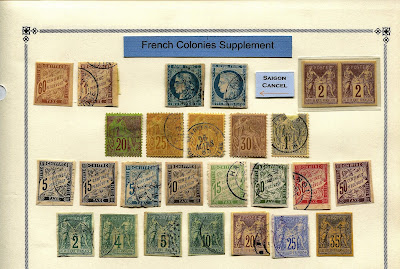