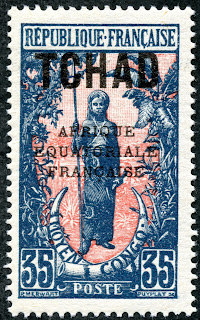 1924 Scott 33 35c indigo & dull rose
"Bakalois Woman"
Stamps of 1922 Chad Issue Overprinted in Various Colors
Into the Deep Blue
Chad became a separate French colony in 1920, and lasted 14 years until 1934, when it was incorporated into French Equatorial Africa.

Chad was one of my earlier country blog posts (June, 2011), and, while heavy on information, only shows several stamp images (and pics at that, not scans ;-).

And so, to rectify, here following are a discussion showing stamp images of Chad. I should mention, though, that Chad by itself only had a postage due issue produced in 1930. The other issues for the colony are mostly overprinted types (change in colors) from the 1907-17 Middle Congo issues. 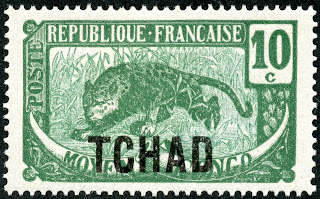 What does that mean for the collector? Well, it means it would be much more difficult to counterfeit these overprinted stamps. Simply adding a forgery overprint to Middle Congo stamps will not work. The color scheme for Chad stamps has also been changed. !! And this color change is true for other French colonies that are overprinted as well. 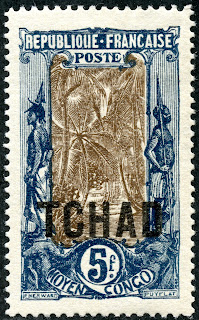 1922 Scott 18 5fr indigo & olive brown
"Coconut Grove"
Types of Middle Congo, 1907-17, Overprinted
There are actually three designs for the eighteen stamp 1922 Chad issue. The "Leopard" design is used for the lower denominations, the "Bakalois Woman" design (shown elsewhere in this post, but not for this issue) for the intermediate denominations, and the "Coconut Grove" design for the higher denominations. 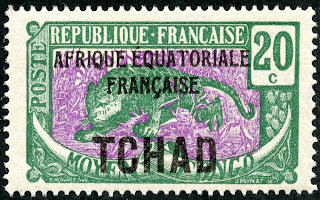 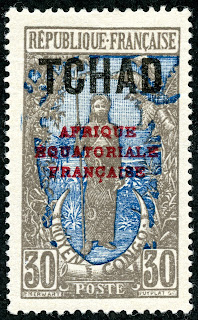 Was all these stamps necessary? I suspect these issues with their many stamps were a bit of a cash cow for the French postal authorities. 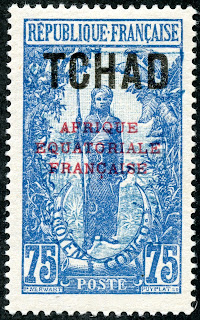 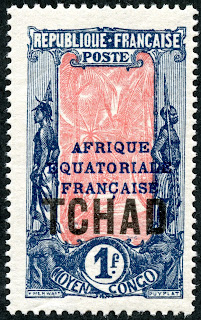 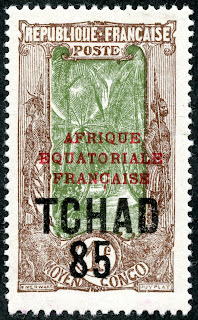 In this case, 85c was surcharged on a 1f brown & olive green. Actually, this color scheme is new, and not used on any previous Chad stamp. 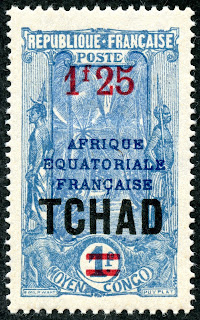 1926 Scott 55 1.25fr on 1fr dark blue & ultramarine (red surcharge)
"Coconut Grove"
Types of 1922 Overprinted like Nos. 29-50
and Surcharged with New Values
I am showing these stamps in particular because they are a riot of color and overprints. !! And again, the underlying color scheme (dark blue & ultramarine) was not used for a prior 1fr denomination. 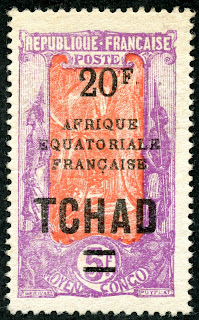 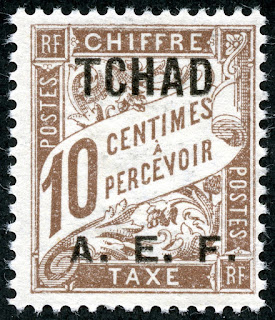 1928 Scott J2 10c gray brown
Postage Due Stamps of France Overprinted
Not all overprinted Chad stamps are based from the Middle Congo types. Here, eleven postage due stamps from France were overprinted as shown in 1928.  CV is <$1-$5+. 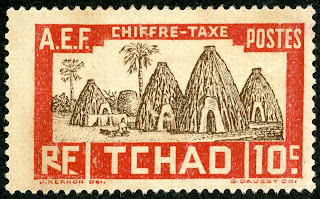 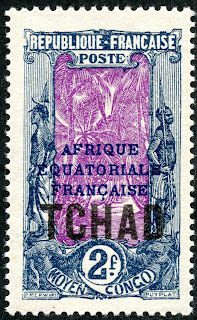 1924 Scott 48 2fr indigo & violet "Coconut Grove"
Stamps of 1922 Chad Issue Overprinted in Various Colors
Out of the Blue
I hope you enjoyed the French splash of color for these issues!