A Big Blue visit with Bud 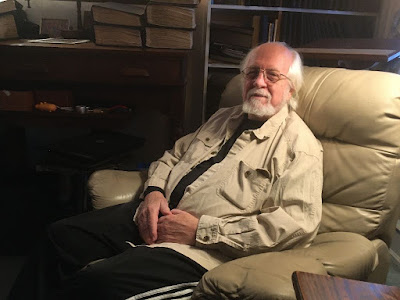 Bud, relaxing in his stamp lair
Into the Deep Blue
I (Jim Jackson) originally began the blog in 2011, initially putting stamps into Big Blue (Scott International Part I 1840-1940 album), while developing a checklist for Big Blue's contents. (Later, I would move the collection to Deep Blue (Steiner pages), but continue with the BB checklist.) Very early on in the process, Bud introduced himself, and encouraged the checklist. He had a more advanced collection than myself, and he would send me "want list" stamps that were his extras.

I improved my 1840-1940 collection over the years, whereby I now have some 50,000 stamps for the era, of which some 31,000 have a space in Big Blue. (See Status of my Deep Blue and Big Blue Collection.) But Bud advanced his collection even further, and by 2016, he filled every space (34,000+) in his Big Blue, as well as adding many blank pages with extra stamps not given a space.  This is an accomplishment indeed, as the collectors who have managed this can probably be counted on one or two hands. Moreover, the stamps he has in Big Blue are correct for the spaces, as he followed the BB checklist.

Bud happily accepted my proposal to show off his completed Big Blue through this blog, and so began the "Bud's Big Blue" posts on September 10, 2016. (See Bud's Big Blue - an Introduction and Index.) As of this date, Bud is halfway through the presentation, having recently posted "Libya" and "Some Thoughts at the Midpoint".

But alas, although Bud and I have had lots of correspondence with each other, we had never actually met. You see, I live on the west coast in Oregon, and Bud resides on the east coast - some 2700 miles away.

As it happened, my spouse and I were going to visit our daughter who had recently moved east. And Bud invited us to visit, which wasn't too far out of the way, and so we did! 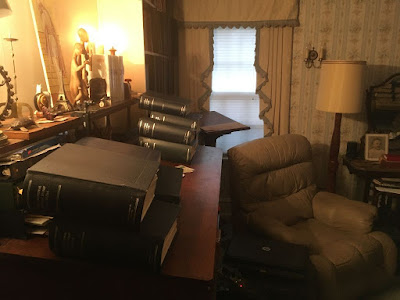 Bud's chair, placed strategically close to a standing desk filled with Big Blues
As it turned out, Bud and I and our spouses had much more in common then simply stamps, and our stay with them was wonderful on so many levels.

As any reader knows who reads Bud's comments about stamps, he is a warm generous witty man with deep knowledge about history, geography, languages, philosophy, religion, ethics, and culture. Their travels were not simply as tourists, but reflected a humanitarian purpose. Naturally, the house is filled with artifacts and mementos from their adventures. 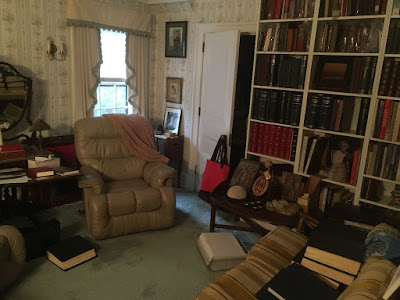 Bud's Stamp Room
Bud took me upstairs where he has a room devoted to stamps. It is lined on two sides with floor to ceiling bookshelves housing books of wide ranging interest, and volumes of stamp albums. The couch is laden with seven! binders of his completed 1840-1940 Big Blue collection. It is quite neat and tidy, all the more impressive for a world wide collector. 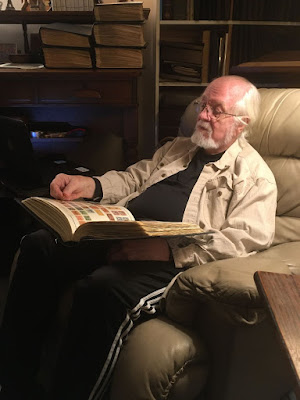 Bud at his Work Station
While stamping, Bud sits in his comfortable chair, and has his Big Blue open to the country of interest. Surrounding him is a new feeder album or group of stamp pages, and he can quickly spy which stamps he needs for his Big Blue collection. He has his laptop handy as well. 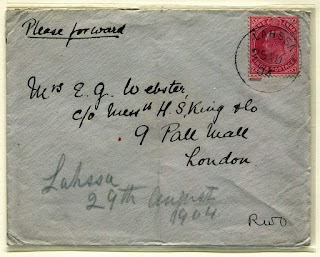 Tibet, Edward VII India 1 Anna, on cover to London
with Postmark "Lahssa" (sic) 19 August, 1904
Naturally, Bud has a number of stamps with a high CV. But I asked him if he had any stamp usage that was out of the ordinary.

He showed me this cover from Tibet with letter included from Herbert J. Walton, a medical doctor accompanying the Younghusband Military Expedition (Dec, 1903-Sept, 1904).

The cover and letter are of historical significance. Moreover, the post office authorities had used a temporary postmark spelling of "Lahssa" rather than Lhasa. Value (based on past eBay results): four figures. 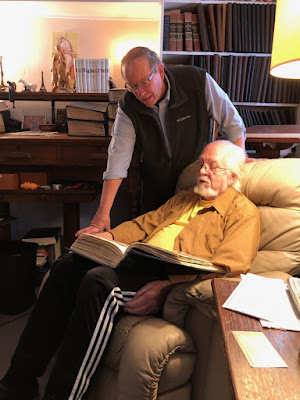 Jim and Bud examining Bud's collection
Out of the Blue
I have known Bud through correspondence for a good period of time, but he and his collection is even more impressive in real life. !!!

Readers will have the opportunity to enjoy the rest of Bud's Big Blue over the next several years.

Thanks Bud for sharing your collection and wisdom with us!