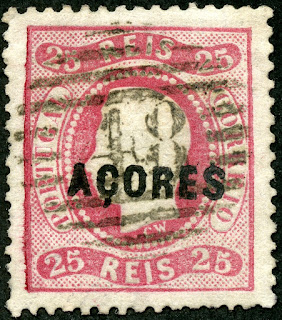 1868 Scott 10 25r rose "King Luiz"
Stamps of Portugal Overprinted
Into the Deep Blue
A former colony, and now part of Portugal (Autonomous Region), the Azores are a group of nine volcanic islands in the North Atlantic Ocean, 900 miles from Lisbon. The population was 250,000 in 1930, and the capital is Ponta Delgada. 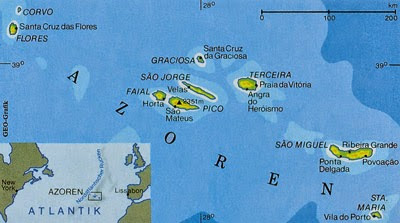 The Azores Blog post of 2011 primarily was concerned with the Big Blue coverage, and said very little about the stamp issues themselves. I now have a chance to rectify that. ;-)

The plan is to broadly cover the overprinted Portugal regular issues of the Azores in two posts: 1868-1911 (this one), and 1912-1930 (next post). There won't be much overlap with the earlier Portugal post coverage, as I only reached the 1898 issue there.

The break at 1911 for this post also makes denomination sense. The 1911 and prior stamps were denominated as Reis/Milreis, while the post 1912 issues were in Centavos/Escudo. 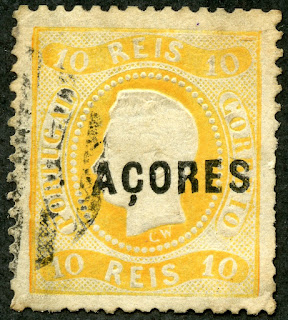 1868 Scott 8 10r yellow "King Luiz"
Perf 12 1/2; OP Type A
Stamps of Portugal Overprinted in Black or Carmine
The first output for the Azores consisted on an 1868 six stamp overprinted imperforate issue, which derived from part of an 1866-67 Portuguese imperforate issue, and an 1868-70 nine stamp overprinted  Perf 12 1/2 issue, which had been issued in Portugal near contemporaneously in 1867-70.

Reprints are on ungummed chalky white wove paper, or shiny white gum thin ivory paper, and, if perforated, are Perf 13 1/2. Be aware that reprints are ~ CV $30, considerably less expensive, in many cases, than the original stamps. For the perforates, a perforation gauge is your friend. ;-)

As had been the case for the stamps of Portugal since 1853, these stamps were typographed and embossed.

The overprint is "Type A"- the only type known for these issues. (More about this in a bit.)

The design is labeled by Scott for the both the imperforate and perforated varieties as "A14".

Close-up of 1868-70 Issue
Design A14
The "A14" design is characterized by a curvy value tablet (both upper and lower), which puts the denomination numerals at an angle. 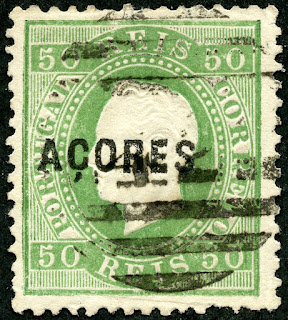 Also different perforations exist for this issue (12 1/2, 13 1/2, 14), and there are some ribbed paper specimens, and minor number color variations.

All in all, a very complicated and challenging issue!

Close-up of 1871-75 Issue
Design A15
The "A15" design differs from the "A14" design in that the upper and lower value tablets have the denomination numeral in a horizontal position. 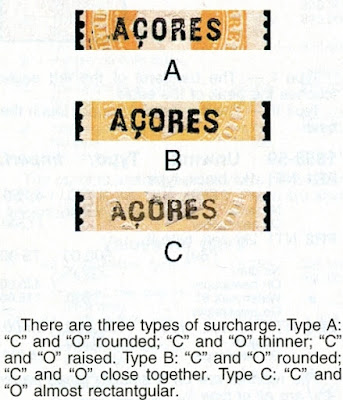 Type C is actually fairly easy, as the rectangular appearing "O" and "C" (squared off) is usually obvious.

But Type A vs Type B? I throw my hands up!

Yes, Type B is characterized by a rounder and fuller "O" and "C" (compared to Type A), and the fact that "C" and "O" are closer together. 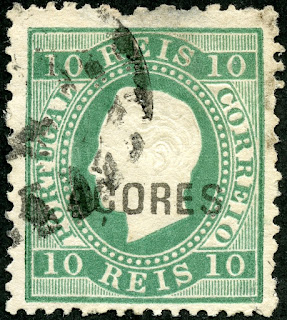 Most stamps exist with the Type C overprint, save for the 15r and 300r, which can also be found with Type B.

The reprints for the 1875-80 issue have the same characteristics as the already discussed previous issues, 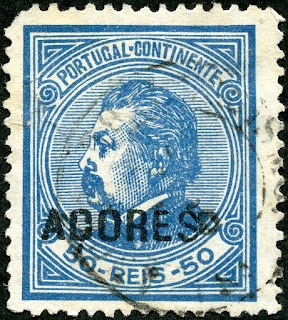 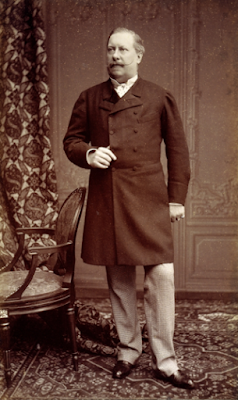 King Luiz in 1885
Dom Luis I was a cultured man. He wrote poetry and had a special interest in science and oceanography. The Aquario Vasco da Gama aquarium in Lisbon, which he founded, still exists.

But during his reign, Portugal fell behind the other western nations in progress and prosperity. 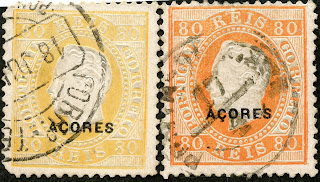 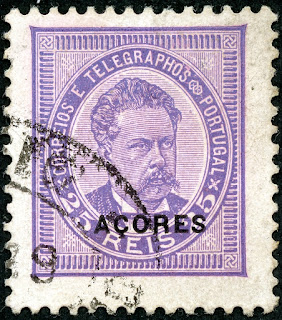 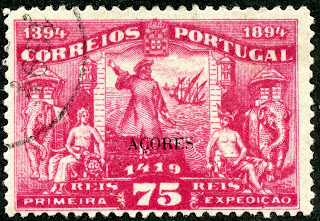 1894 Scott 71 75r deep carmine
Portugal Scott 97-109 Overprinted
Prince Henry the Navigator Issue
Now we enter into the advent of commemoratives among nations, kicked off by the US 1893 Columbian Exposition Issue.

For the 5th century of the birth of Prince Henry the Navigator, a thirteen stamps set of the above design was issued in 1894. 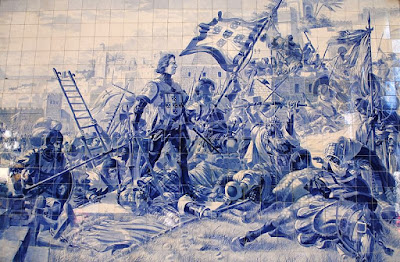 Prince Henry the Navigator during the conquest of Ceuta
The above panel by Jorge Colaco (1864-1942) depicts the conquest of  Moroccan Ceuta on the African coast on August 21, 1415. This was the beginning of the Portuguese Empire. 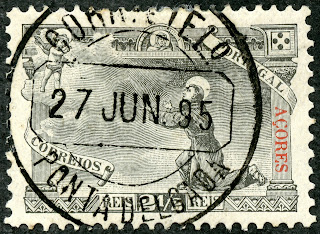 In 1895, a fifteen stamp issue was released to mark the 7th centenary of the birth of St. Anthony of Padua.

There were four designs, but only one (the 2 1/2r black above) was typographed, while the rest were lithographed.

Note the "Ponta Delgada" cancellation? You might recall that Ponta Delgada also issued their own stamps between 1892-1905. 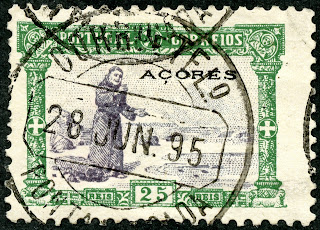 BTW, the stamps have a eulogy in Latin printed on the back. I show one with the Portugal post, including a translation by one of out intrepid readers in the comments section. 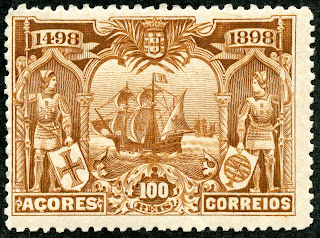 1898 Scott 99 100r bister  brown
"Flagship San Gabriel"
Vasco da Gama Issue; Common Design Type
In 1898, an eight stamp eight design set was issued marking the Voyages of Vasco da Gama. This is a common design type, so we have seen it before with other Portuguese colonies. 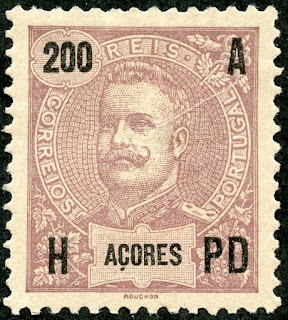 On February 1, 1908, King Carlos was assassinated while traveling in an open carriage in Lisbon. His heir, Prince Luis Filipe, also died. The younger son, Prince Manuel, became King of Portugal. 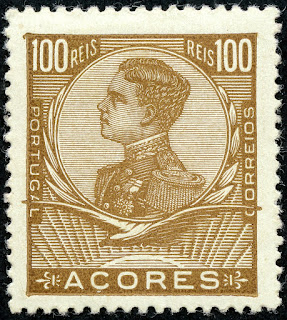 He assumed the crown on February 1, 1908 after the assassination death of his father, King Carlos.

He was eighteen years old.

But his reign was cut off on October 5, 1910, with the revolution known by the same date. 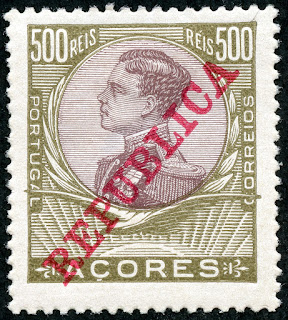 1910 Scott 138 500r olive & brown
Stamps of 1910 Overprinted in Carmine or Green
The First Portuguese Republic, brought on by the Revolution of October 5, 1910. meant, especially.for stamp collectors, a plethora of Portuguese "Republica" overprints.

The preceding "Manuel II" issue, only released April 1, 1910, was subsequently overprinted in 1910 as shown, on the entire fourteen stamp issue. 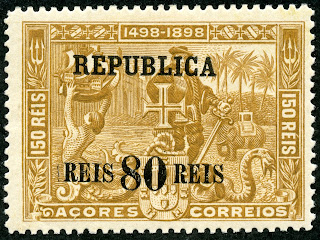 The First Portuguese Republic lasted sixteen years until the May 28 coup d'etat of 1926. 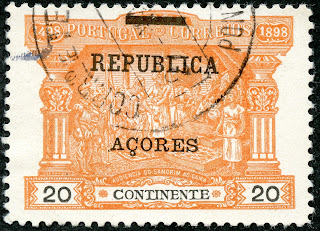 The First Portuguese Republic was not exactly a success.

The Republic burned through nine presidents, and forty-four Ministries. Corruption and anarchy was the order of the day. 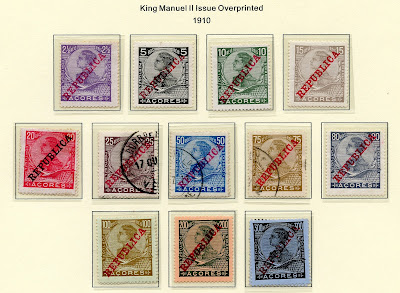 1910 King Manuel II Issue Overprinted in Deep Blue
Deep Blue (Steiner) has eleven pages for the 1868-1911 time period. All of the major numbers have a space.If one is collecting the numerous minor number entries for the 1871-1885 period, one will need some quadrilled pages. 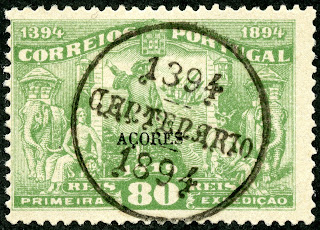 1894 Scott 72 80r yellow green
Portugal Scott 97-109 Overprinted
Prince Henry the Navigator Issue
Out of the Blue
The 1868-1880 embossed King Luiz issues, with their numerous overprint types, perforations, and papers, is a real challenge!

Note: Azores 1868-1882 Types A, B, & C Illustration scan is from the Scott catalogue, and is used here for educational purposes. The Azores map, "King Luiz" pic, and the Prince Henry the Navigator panel all appear to be in the public domain.