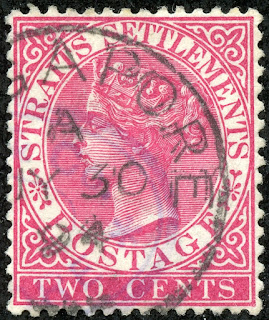 1883 Scott 41 2c carmine rose "Victoria"
Quick History
Straits Settlements (on or near the Malacca Strait, hence the name) was a group of British territories established in 1826 by the British East India Company. 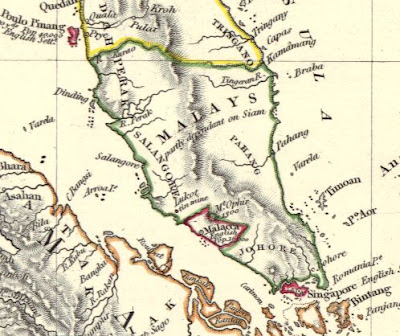 Penang (Pinang), Malacca, Singapore (Red outlines)
Straits Settlements 1844 under East Africa Company
The Straits Settlements  were a consequence of the Anglo-Dutch Treaty of  1824, where the Malay archipelago was divided between the Dutch south zone and the British north zone. 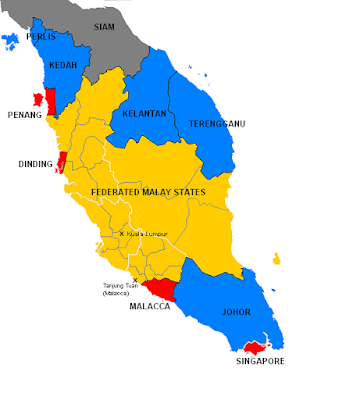 Initially, Penang was the administrative center, but quickly (1832) Singapore, with its advantageous location, became the leading settlement.

The population was 572,000 in 1901, with the Chinese and the Malays far outnumbering the Europeans.

The Governor of the Straits Settlements was also High Commissioner for the Federated Malay States, British North Borneo, Sarawak, and the sultanate of Brunei.

Labuan joined the Straits Settlements in 1907.

(There were smaller entities as well- Dinding (which never had much population or development), Christmas island, and Cocos (Keeling) islands. A map of all of the parts of Straits Settlements is available at the fine Dead Countries Stamps website.)

For further reading and viewing of the history and stamps of the British Malay Peninsula region, see my blog post- Malay and States.

The Japanese occupied the Malay Peninsula during WW II until 1945.

Straits Settlements was broken up in 1946. Penang and Malacca became part of the Malayan Union. Labuan was attached to  British North Borneo, while Singapore became a Crown Colony. 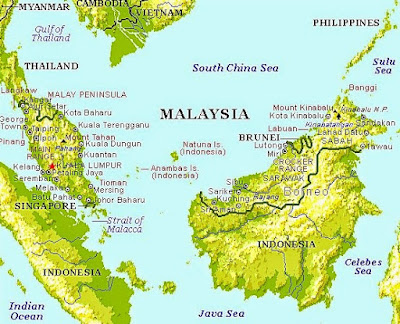 Present Day Singapore and Malaysia
The British led Malayan Union of 1946 was changed quickly to the Sultan led Federation of Malaya in 1948. Independence was achieved for Malaya in 1957. Then, with the addition of Singapore, Sarawak, and North Borneo (State of Sabah), Malaysia was born in 1963. Finally, Singapore exited in 1965. 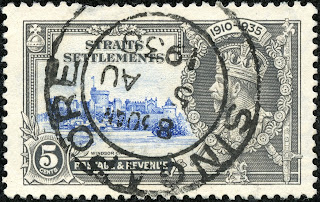 The above categories, attractive as they are, are really specialist territory, and, at the moment, I don't have any. I will, however, mention a few of the issues briefly. 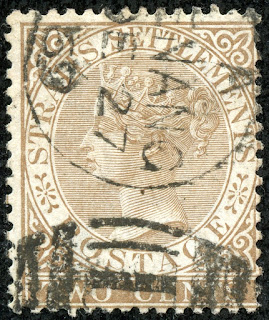 The initial production  for Straits Settlements proper was on September 1, 1867, with a nine stamp overprinted crown and surcharged issue, using stamps of India. The least expensive is CV $40+, and I don't have any.

As mentioned, with the advent of "Crown Colony" status in 1867. Straits Settlements also received their own stamps, printed by Dr la Rue. The 1867-72 nine stamp design shows a center portrait of the queen, surrounded by script on a white background.

The watermark is "Crown and C C". One will need to pay attention to this, as the similar 1882-99 series repeats some of the same denominations and colors, but with a "Crown and C A" watermark. 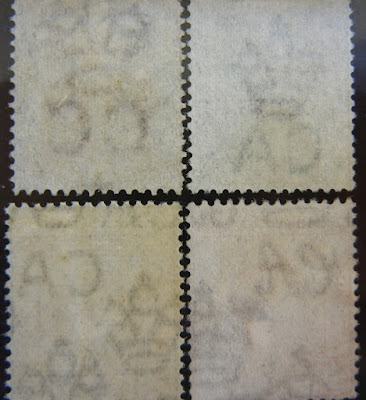 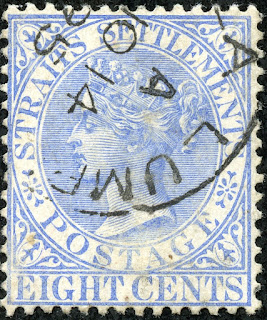 The next major issue was produced between 1882-99, and utilized the four designs from the 1867-72 issue, as well as two new designs. The eighteen stamp production was printed on "Crown and C A" watermark paper. Since the denomination and colors for some of the stamps are the same as the earlier 1867-72 issue, one will need a watermarking tray. 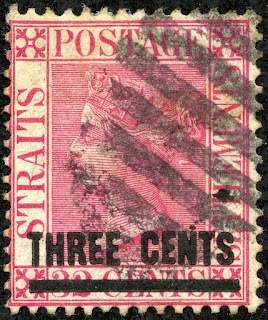 1894 Scott 74 3c on 32c rose
Between 1883-94, there were some 25 stamps of preceding issues surcharged (1c,2c,3c,4c,8c,10c,30c). Clearly, there was specific and wide denomination stamp shortages during this period. The Straits Settlements, especially Singapore, was growing, and the available stamps were not keeping up with the mail volume. 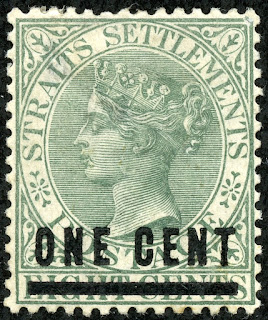 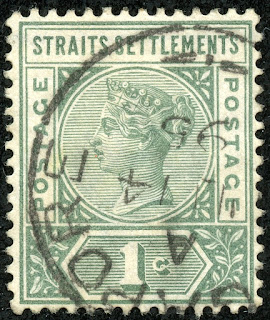 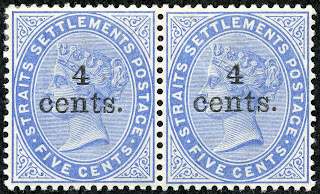 1899 Scott 89 4c on 5c ultramarine
Stamps of 1883-94 Surcharged
In 1899, four stamps were surcharged 4c. This was the last occurrence of surcharged issues for the Straits Settlements. 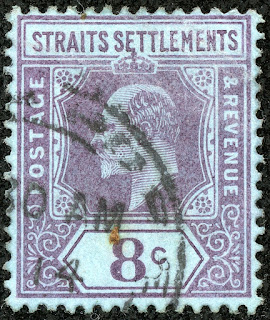 1902 Scott 97 8c violet/blue "Edward VII"
With the ascension of Edward VII, a thirteen stamp issue was released in 1902, using the keyplate design on Wmk 2 paper. 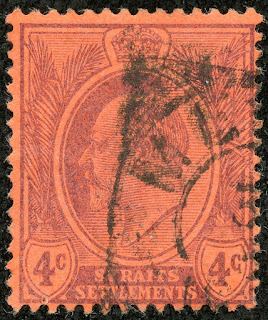 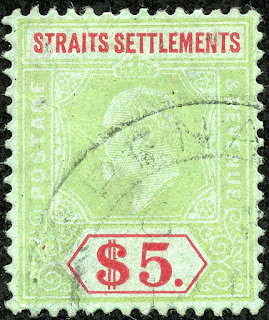 Chalky paper can be tricky. Soaking a stamp in water tends to remove the chalky character. Obviously, most "used" stamps have been subject to this process. Examining the perforation area of the stamp sometimes reveals chalky evidence.

But the entire twenty-two stamp issue was printed on Wmk 3 "Multiple Crown and C A" paper, which should differentiate this issue from the preceding ones. 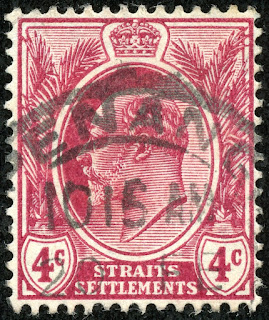 I should mention that when Labuan joined the Straits Settlements in 1907, a group (ten stamps) of their 1902-03 stamps were overprinted and/or surcharged for use in the Straits Settlements. Some are only moderately expensive ($3-$10: five stamps). They were not given spaces on Big Blue and I don't have any. But they are on my Bucket List. ;-) 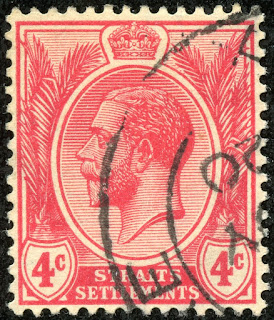 Also, the A24 design on nine stamps (see next illustration) is Die I for this issue. 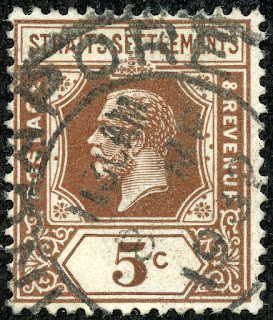 1932 Scott 187 5c dark brown "George V"
A24 Design; Wmk 4; Die II; Ordinary Paper
The 1921-32 twenty-six stamp issue uses the same designs as the 1912-18 issue, but on watermark 4 "Multiple Crown and Script C A" paper: again helpful. The lower denominations through the 10c ultramarine are on ordinary paper; while the higher denominations, beginning with the 10c violet/yellow, are on chalky paper.

The A24 design (ten stamps) is found as Die II.

Die I/Die II illustrative/descriptive differences can be found on "Dies of the British Colonial Stamps" in the introduction section (page 38A) of the 2014 Scott 1840-1940 catalogue, or link to my Gold Coast post. 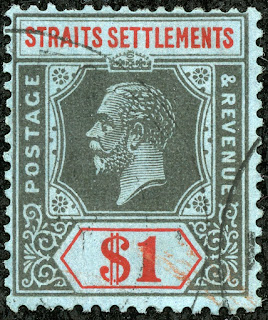 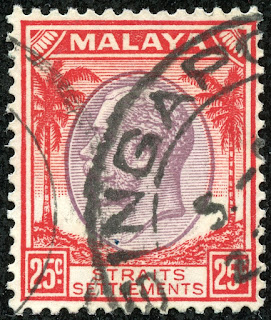 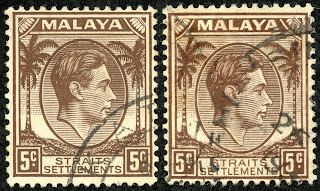 The interest (for me) is that the issue was printed with two dies.

Die I: printed from two plates. Horizontal lines of the background touch outside the central oval. Palm frond in front of King's eye has two points.

Die II: printed from one plate. Lines of background separated from central oval. Palm frond in front of King's eye has one point.

Usually, the denomination was printed with either Die I or Die II, but not both. However, the 4c brown orange, and the 5c brown ( illustration) were printed with both dies. Can you find an example of both in your collection? 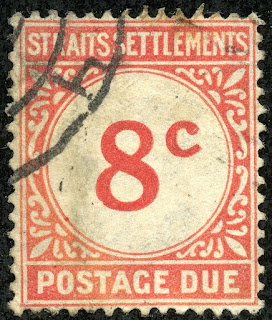 1924 Scott J4 8c red
A functional appearing six stamp postage due issue was released between 1924-26. The French had more fun with their colony postage dues (Here, specifically St. Pierre and Miquelon), if one would like a comparison. ;-) 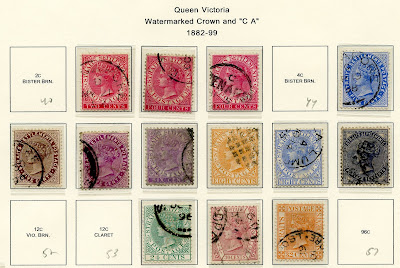 1882-99 "Victoria" Issue in Deep Blue
Deep Blue (Steiner) has 17 pages for the 1867-1948 stamp issues, and all major Scott numbers have a space. Unless one is a specialist with deep pockets- because of expense-, sections of Deep Blue for the Straits Settlements are unlikely to be filled. 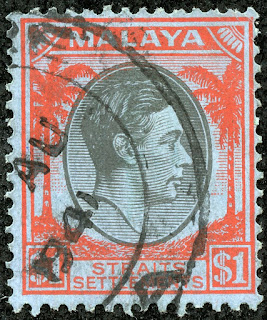 1938 Scott 250 $1 red & black/blue "George VI"
Big Blue
Big Blue '69 has just two pages and 92 spaces for the stamps of Straits Settlements  (Malacca, Penang, and Singapore). The '69 editors separated out "Malaya" and gave them their own section.

The '69 editors dropped the postage due category (eight spaces), which was in the 40s editions. 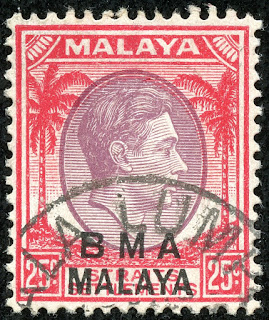 192, 194X3, 223 on Envelope
Fascinating part of the world, and the philatelic history, especially with the addition of  covers, would be a great  specialty collection. Many of the stamps are priced in the inexpensive range, but others will tax the pocketbook. I feel drawn to it... wait! I still need to finish the WW classical era blog posts.... Oh, well...  ;-)

Note: Map scans appear to be in the public domain.