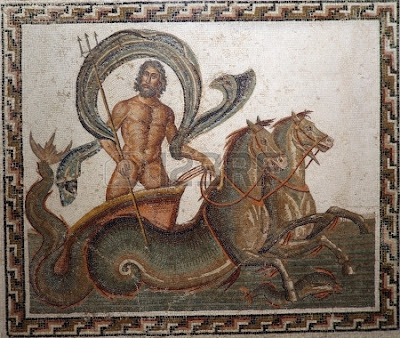 As is common in the British Caribbean, Barbadian classical era stamps feature the nation’s seal or badge, in this case, several iterations of it. The seal first appeared in 1892 with a female figure riding atop two hippocampi. But who is she: Neptune’s wife Salacia brandishing his trident? Britannia ruling waves? Or Queen Victoria inappropriately attired for water sport?

The female figure has been redrawn for the 1912 series with a watchful King George V imposed above her. But in the 1916 series a sensibly seated male figure rides in a chariot retrofitted with a side-wheeler paddle. He unmistakably looks like KGV. Finally, for the 1938 series the male figure has shaved (KGVI).

Classicists say the motto -- et penitus toto regnantes orbe Britannos -- intentionally corrupts a line from Virgil’s first Ecologue, one that Brits consider a snub. Virgil records a Roman farmer’s poetic lament about being banished to Britain, “et penitus toto divisos orbe Britannos.” By changing one word, “…and Britain is isolated from the whole world” becomes “…and Britain rules the whole world.”
To make up for BB’s omission of the mid-19th century Britannias, I’ve put a few on the supplement pages, including a small color study for the gray-to-blue one penny. Barbados shares this design with Mauritius and Trinidad.

Oops. I notice a clean shaved charioteer infiltrating the line BB reserves for the bewhiskered (page 1, bottom line).  I have replaced and dismissed him to the supplement pages, but did not rescan. If you find other placement errors, please send a comment.
Census: 57 in BB spaces, 52 on supplement pages.

Jim's Observations
What a disappointment.  Big Blue neglects the first 30 years of Barbados's stamp issuing history, not including ONE of the magnificently designed "Britannia" stamps. Not a few issues either, but 59 Stamps!

Big Blue's goal is "a representative collection", so they don't have to include any and all stamps. And for the most part expensive stamps are not in Big Blue. But to see all the inexpensive wonderfully designed and engraved Barbados stamps left out - it hurts! :-( 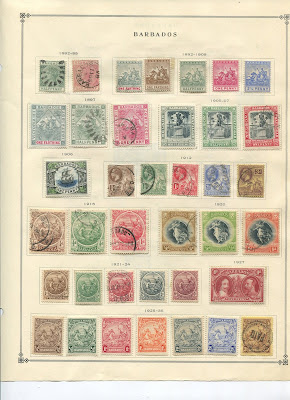 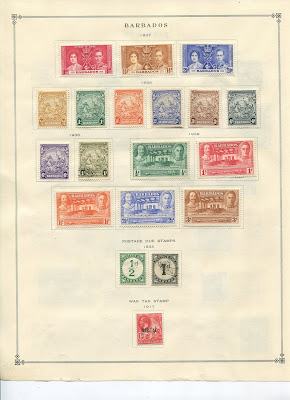 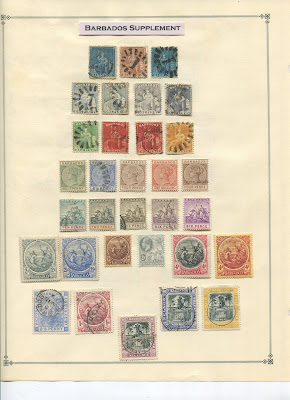 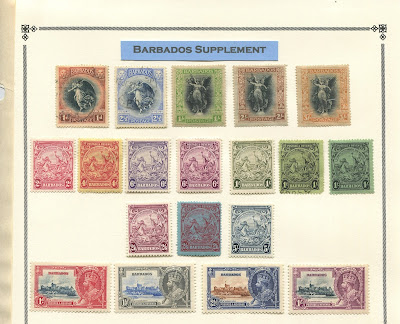