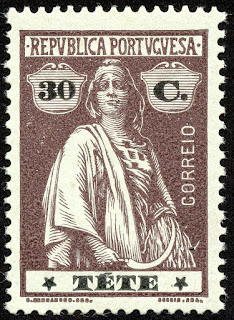 1914 Scott 37 30c brown/green "Ceres"
Quick History
Tete, along the Zambezi river- (still full of crocodiles and hippos!),  was a region of the Portuguese East Africa Colony (Mozambique Colony), and is located in southeast Africa in the central-eastern part of Mozambique.

The economy consists of coal and iron mining, and fishing. 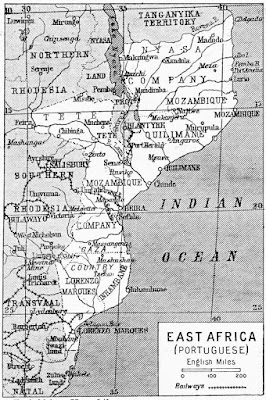 1922 Map of Portuguese East Africa (Mozambique)
Tete is located here between Northern Rhodesia and Southern Rhodesia
The reality was that, within the Mozambique Colony, settlements were scattered, and these outposts by necessity had their own stamps. One can find issues for Lourenco Marques (1895), Inhambane (1895), Zambezia (1894), Quelimane (1913), Tete (1913), Mozambique Company (1892), Nyassa Company (1898), and Mozambique (1877) for the Portuguese East Africa lands. Eventually, the stamps of Mozambique were exclusively used.
For a nice  Mozambique Area Transition Chart, I refer you to the Dead Countries Stamps website. Thanks Michael ! 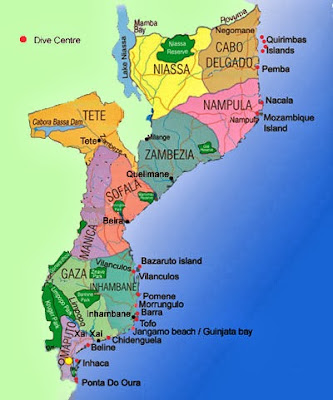 Tete Province within Mozambique
In 1920, Tete formed a separate province. The stamps of Mozambique then replaced those of Tete. 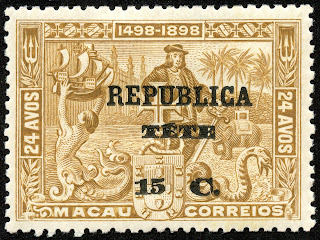 The entire output for Tete consists of three surcharged issues of the common design 1913 "Vasco da Gama" set (from Macao, Portuguese Africa, and Timor), and a 1914 "Ceres" issue. That's it.

Fortunately, I do have the Selos Postais 2011 Colonias Portuguesas Afinsa Portugal catalogue, which gives more information on the colonial issues, compared to my Scott catalogue. I will make some comments based on that catalogue. 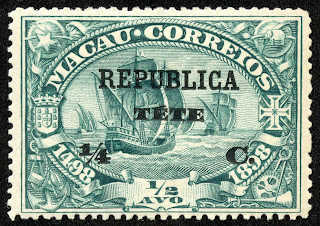 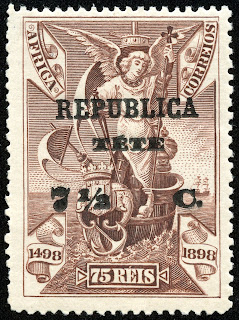 An interesting observation is the Scott catalogue has slightly higher prices for used Tete stamps, but unused is far far more common in collections. I don't actually have any used examples myself. 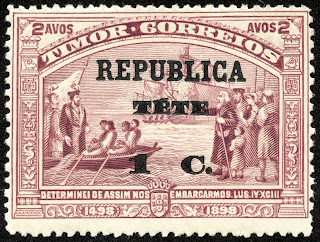 1913 Scott 19 1c on 2a red violet
"Embarking at Rastello"
On Stamps of Timor
A third colony- Timor- also had the Vasco da Gama issue surcharged for Tete. CV is similar to the other Vasco da Gama surcharged Tete issues, with a CV $1+ for seven out of eight stamps. 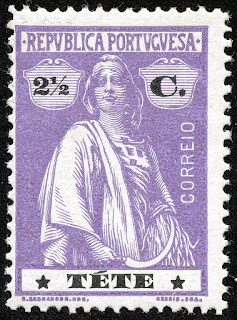 Note the "star" on either side of the "Tete" label is oriented so that a star point is at the 12 o'clock position? The Afinsa catalogue labels this Type I-I. This stamp (2 1/2c)  can also be found as Type I-II or Type II-I. The star orientation for this stamp other than Type I-I is @ a higher CV. 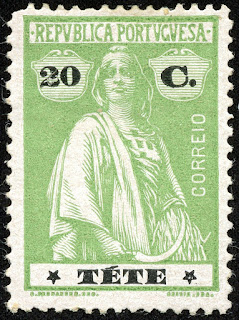 There also exists a Type III star orientation, where there is no star point @ 12 o'clock or 6 o'clock for the 1/4c & 1/2c denominations. A Type III has a higher CV.

As one can see, a specialty catalogue can add very useful information!

( I should note that the Portuguese colonies with "short" names (Tete, Timor etc) have the "star" on either side of the name label for the "Ceres" issue, (and the potential for "types"), while the colonies with longer names (Quelimane, Angola etc) do not.) 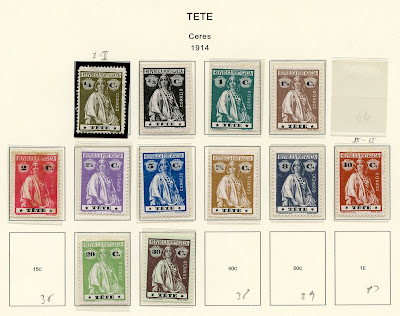 1914 "Ceres" Issue in Deep Blue
Deep Blue (Steiner) has four pages for the 1913-14 stamps of Tete, and includes a space for all the major numbers. (My Steiner also, at this time, does not reflect any changes in the Scott numbers for the "Ceres" issue.) 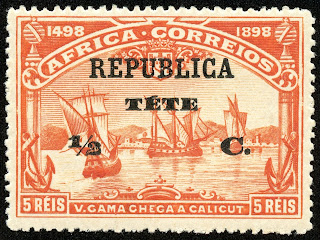 The coverage is located on the same page as Tibet, and just before Timor.

The BB 40s editions have the same coverage.

There are no "expensive" (Threshold $10) stamps required for the BB spaces.

Comments
A) Expensive stamps ($10 threshold): None
B) *1913 - three choices (surcharged issues from Macao, Portuguese Africa, and Timor) for each space.
C) *1914- Scott numbers for the "Ceres" issue reflect those found in the 2014 catalogue. 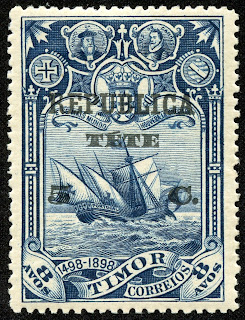 1913 Scott 21 5c on 8a dark blue
"San Gabriel, da Gama and Camoens
On Stamps of Timor
Out of the Blue
Quelimane, the other section of Zambezia to gain their own stamps , had similar stamp releases in 1913-14. Curiously, Scott values Quelimane issues more than the output of Tete ($66 vs $47 for the surcharged Vasco da Gama issues). Supply/demand working here, or market inefficiencies ? ;-)

Note: Maps and Boroma Church pic appear to be in the public domain. 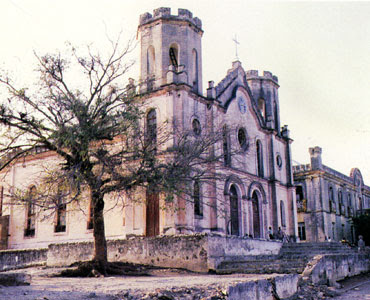 Boroma Church at Tete
Posted by Jim at 3:41 PM