The learning curve for Nepali stamps is as steep as Mt. Everest, and I am no philatelic Sir Edmund Percival Hillary. So, I’ve asked Jim to do the arduous climbing for this post.

The first four stamps on BB’s Nepal page are perhaps the most puzzling stamps in the whole album. The cliché varieties, the fuzzy printings of worn plates, the non-philatelic usages and even some tricky forgeries -- all thrown together in feeder albums and stamp dealers’ stocks -- make a generalist’s head ache. The two scans (below) show my rookie attempts and unstudied acquisitions (at least one stamp on the supplement page is upside down).

Jim's Observations
I agree with Bud that the early stamps of Nepal (A1, A2, A4 designs) are complicated indeed, with the pin-perf. imperf, European wove paper, Native wove paper, and later, telegraph cancels.
Then there are the plates, cliché varieties, various usages, and forgeries, to name a few of the challenges.
First, check out my revised post on Nepal...
Nepal Blog Post & BB Checklist (Revised)
I was helped immensely by the fortuitous fact that Dr. Frank Vignola is a member of my local stamp club, and is a recognized expert on Nepal's early issues. (Actually, his father - also named Frank Vignola - was the original expert philatelist/collector of Nepal, and the son - Dr. Frank - continues in the tradition.)
Together, Dr. Frank Vignola and Richard Frajola ( a very well known expert on classical philately) have published an internet version of the Catalog of Classic 1888-1930 Stamps of Nepal.
There, is also a link to Dr. Frank Vignola's 128 page (pdf) original research exhibit on Kukris issues (1881-1930).
Well, there is enough information above to keep a collector immersed in the myriad aspects of Nepal philately- for years!
But what if the WW collector wishes to just have an overview?
I asked Dr. Frank Vignola to write an introduction for my Nepal Blog post, and I am also presenting it here... Thanks Dr. Frank!
Going by Scott catalogue numbers is difficult because one number covers several varieties.
In general there are three types.  The first 1881 issue is on European wove paper.  The second series that runs from 1886 to 1907, and is on native paper.  The third series, that was used for telegraph forms, can be found from 1917 to approximately 1930.  The second and third issue have the black half Anna stamps.
In actuality there are about 30 printings of the 1 Anna and 2 Anna stamps from 1881 to 1930 and about a dozen of the 4 Anna stamps.  These stamps were all printed from the original 1881 plates.
The telegraph canceled stamps are fairly common, as they sometimes would use whole sheets of stamps on a telegraph form.  The rate was something like 2 pice per word.
1 Anna = 4 pice and the first issue had 1, 2, and 4 Anna stamps.
The first Sri Pashupati issue had 2, 4, 8, and 16 pice that replaced the ½, 1, 2, and 4 Anna stamps.  They kept the postal rates fairly constant for a long time.
Jim's Comment: Thirty printings! No wonder early Nepal stamps are definitely specialty territory, requiring intensive study, and a very good reference collection of books! And the stamps were all printed from the original- or retouched- 1881 plates! And as fact, the known settings total 85 for the 1a (28), 2a (31), 4a (12), and 1/2a (14).
Page 1 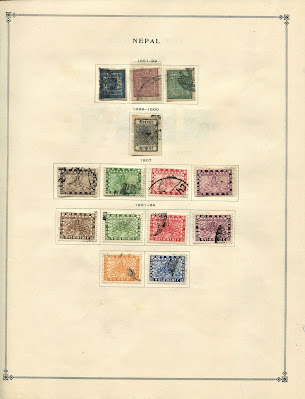 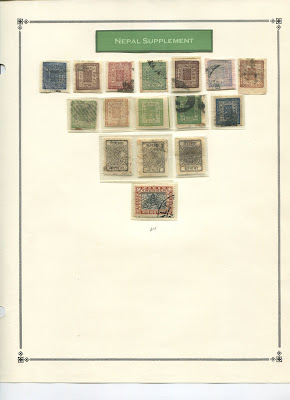