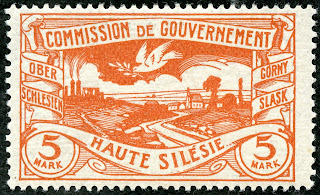 1920 Scott 31 5m orange
"Dove with Olive Branch Flying over Silesian Terrain"
Quick History
Upper Silesia had been part of Germany prior to WW I. It was situated in the far eastern portion of Prussian territory, sandwiched between the newly created Poland and Czechoslovakia. 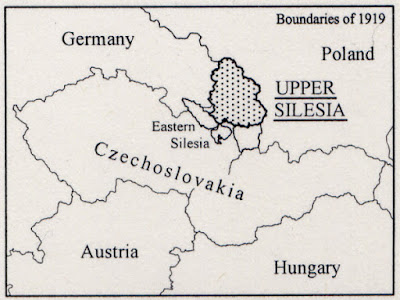 Upper Silesia 1919
After WW I, the question was, what do do with Upper Silesia? It was a mineral and industrial rich area, accounting for 20% of German coal production. It had both a significant German and Polish population. Poland laid claim to it, and Germany wished to retain the territory.

North of Upper Silesia to the Baltic Sea, a large swath of West Prussia (including Posen) was transferred to Poland without a plebiscite to give Poland access to the sea via the "Free City" of Danzig.

In February 1920, the Allied Commission (with occupation of British, French, and Italian Forces) assumed control of the territory.

The Plebiscite issue "Numerals" were released on February 20, 1920.

Feelings were running high, and there were clashes between Germans and Poles during the plebiscite period.

A propaganda campaign, backed by the respective Polish and German governments, was instituted. 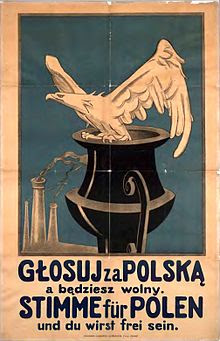 Vote for Poland and You will be Free 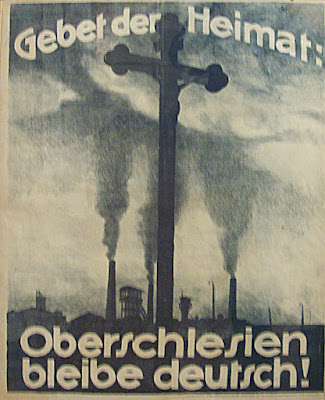 Prayer of the Homeland: Upper Silesia remains German!
The plebiscite was held on March 21, 1921 with 1.1 million votes cast, with the vote for German retention winning overall @ 60%-40%.

But the Poles objected to allowing German migrant worker non resident votes. There was a large scale Polish uprising between April-June, 1921. The Germans responded with volunteer paramilitary units. The final position of the opposing Polish and German forces became, de facto, the eventual partition.

The Allied Commission was unable to come to a decision about Upper Silesia, and turned the question over to the League of Nations in August, 1921. 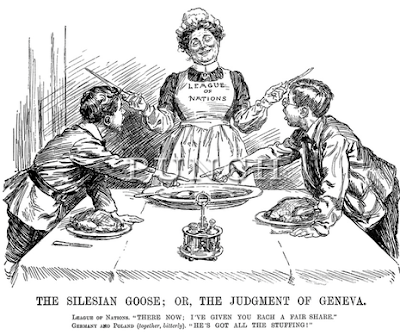 League of Nations: "There now, I've given you each a Fair Share"
Germany or Poland (Bitterly): "He's got all the Stuffing!"
The League of Nations basically confirmed the new "de facto" border. Germany was awarded two-thirds of the territory, but Poland retained half the population. More significantly, Poland also received 80% of the industrial area. 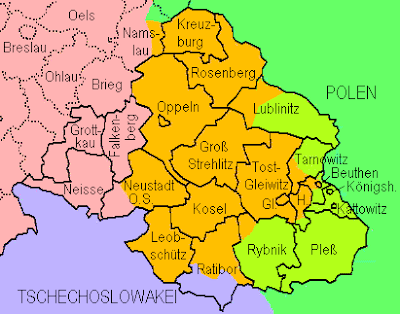 It became part of the Republic of Poland in 1945. 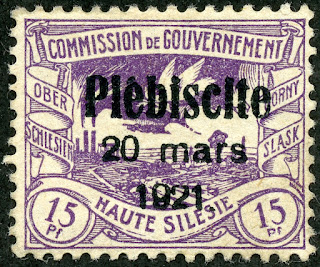 1921 Scott 33 15pf violet
Overprinted in Black
Into the Deep Blue
The 2014 Scott Classic Specialized 1840-1940 catalogue has, for Upper Silesia 1920-1922, 90 major number descriptions in the regular (Plebiscite) and official categories. Of those, 60 are CV <$1-$1+, or 67%. Clearly, a representative collection can be accumulated by the WW collector without much financial outlay. 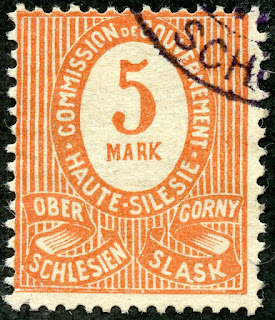 On February 20, 1920 a nine stamp "Numeral" set was issued. The Commission of Government / Upper Silesia had the stamps printed in Paris.

The stamps name the territory in three languages: French, German, and Polish.

CV ranges from <$1-$5. Used are valued @ twice unused. It annoys me to find a "used" stamp, as above, that is clearly CTOed to  increase value. I won't pay a premium for an example like this. 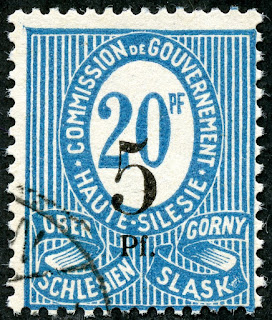 Each surcharge can be found in multiple types. 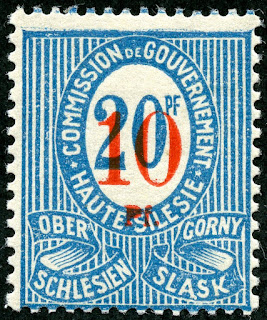 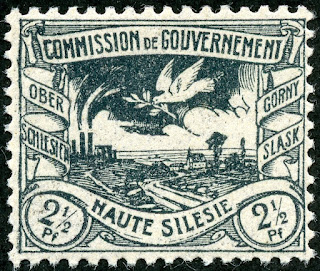 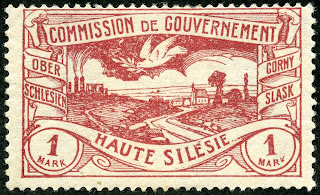 1920 Scott 28 1m claret
"Dove with Olive Branch Flying over Silesian Terrain"
Although the scene is peaceful, the campaign to annex or retain the territory by the Polish and German partisans - not so  much. 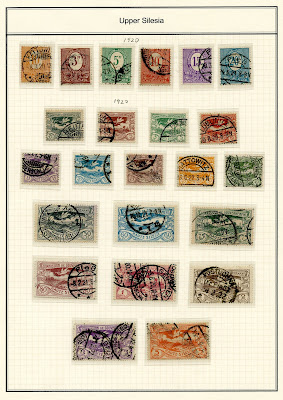 1920 Issue Cancels on Supplementary Page
Feeder albums often have many interesting examples of cancelled stamps for the 1920 issues. I have a supplementary page for them. 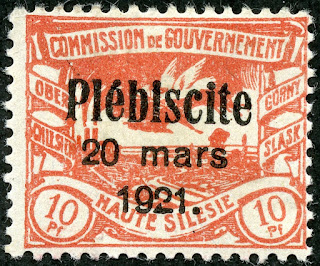 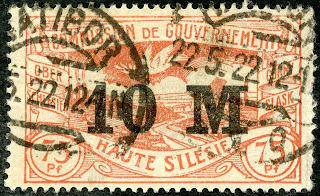 In March, 1922, three stamps from the 1920 issue, but in different colors, were surcharged as shown. No doubt the surcharged stamps reflect the German inflationary period. 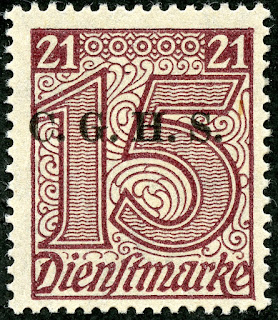 1920 Scott O34 15pf violet brown
Local Official Stamps of Germany, 1920, Overprinted
In February, 1920, German stamps of 1905-20 were handstamped in blue "C.I.H.S." for use as official stamps by French occupation forces. Reprints are common, while originals are rare. CV is <$1 for thirteen stamps. Despite the low CV for reprints, I do not have any at the moment.

Illustrated above is an example of the local official stamps of Germany, 1920, overprinted "C.G.H.S." on seven stamps. "C.G.H.S." are initials for Commission de Gouvernement Haute Silesie. 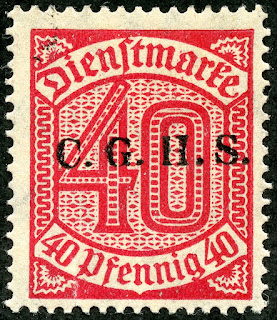 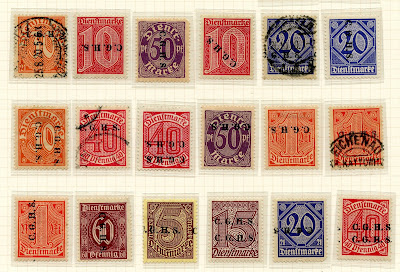 Official Stamps of Germany, 1920-21
Overprint Variations
The "C.G.H.S." overprinted officials can be found with numerous overprint variations, as shown. Generally, the variations command little, if any, premium CV-wise. The Michel catalogue, in a most thorough German way, breaks the variations down into 20 recognizable types.

1920 "Numerals" Issue in Deep Blue
Deep Blue (Steiner) has five pages for the stamps of Upper Silesia, and all major numbers have a space. In addition, there are spaces for the minor number "types" of the surcharged 1920 issues (Scott 10-13).

One may want to also have supplementary pages for the many cancelled 1920 stamp examples found in collections, and also for the official overprint variations. 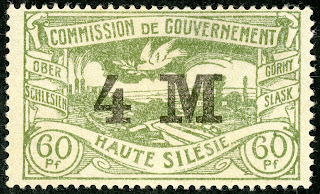 There are no expensive stamps.

What is present is the 1921 Polish Occupation stamp issue which is no longer listed in the Scott catalogue. ;-) Scott has a note that stamps of this design were a private issue, and not recognized by the Inter-Allied Commission of Government. Value, Set of 7, $65 unused. The '47 Scott catalogue, though, had them included as "N1,N2,N3,N4".

Comments
A) Expensive stamps ($10 threshold): None
B) * Occupation-Polish - Scott has a note that stamps of this design were a private issue, and not recognized by the Inter-Allied Commission of Government. Value, Set of 7, $65 unused. The '47 Scott catalogue, though, has them included as "N1,N2,N3,N4". They are still in Big Blue. But, they are no longer listed in today's Scott catalogue. 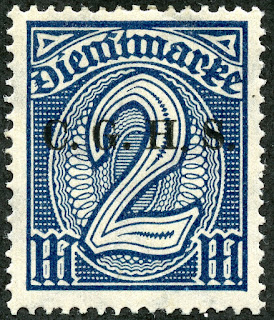 1922 Scott O51 2m dark blue, Wmk 126
Overprint on Official Stamps of Germany, 1920-21
Out of the Blue
Plebiscite issues are some of my favorites, as the stamps are clearly linked with a historical moment.

Note: Maps, poster scans, image of League of Nations cartoon- all appear to be part of the public domain.