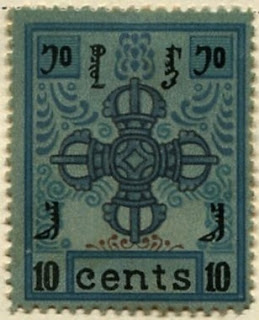 At first glance the stamps on Big Blue’s Mongolia page seem to come from two different countries. One county prefers lithographed stamps with traditional symbols in muted colors while the other likes military and industrial themes better, photoengraved and monochrome. But Big Blue did not in this case, as it often does, fit two countries with only a few stamps onto a single page. Mongolia’s stamps stand alone. 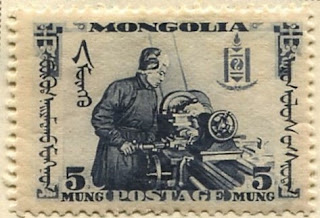 Scott #64, indigo
A closer look does reveal some minor continuities between the 1924/29 and the 1932 issues. The Soyombo, a symbol of Mongolia invented in 1686, appears on most stamps, albeit indistinctly on the 1932 set. The parts of this symbol are often construed as advice for the Mongolian people. “Spread like fire.” “Shine like the sun.” “Be sharp like pointed spears, strong like walls.” And so forth. Mongolians interpret the yin yang symbol as being two fish with watchful eyes signifying the importance of reproduction. “Be numerous,” the fish say, and “keep an eye out for trouble.” The Soyombo continued on Mongolia’s stamps until 1946. 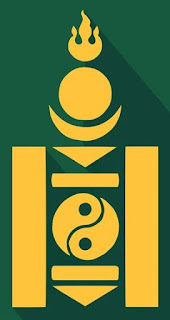 Soyombo
In addition to the Soyombo, the use of the Latin alphabet on Mongolia’s stamps provides continuity of a sort, especially since one might not expect enthusiasm for Latin letters on Central Asian stamps. Scott #67 shows a sizeable crowd studying the Latin alphabet writ large on a wall. Their eagerness implies an interest greater than mere compliance with UPU specifications. 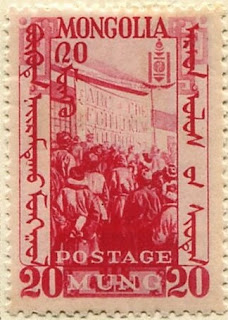 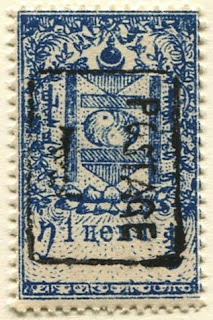 Scott #16a, “Postage” overprint on fiscal stamp (possibly forged)
These minor continuities notwithstanding, the stark contrast between the stamps of 1924-29 and those of 1932 remains obvious, signaling major social change and disruption. The Soyombo’s fish were wise to recommend watchfulness, for even in 1924 trouble was at hand. Then things got worse. 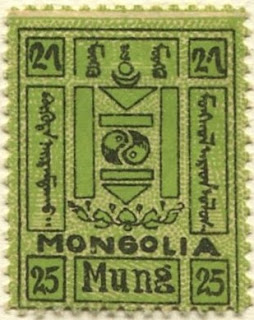 Accounts of what actually happened differ greatly. Mongolia, a vast but sparsely populated country, had long been torn between China and Russia.  The Russian sympathizing Mongolian People's Republic (MPR) gained control in 1924. It wavered between minimal tolerance of venerable Mongolian traditions and aggressive repression of them. For example, the Buddhist vajra appearing on Mongolia’s first stamps (Scott #4 above) was soon replaced by the more secular Soyombo (Scott #s 16a, 39, and 67), which itself was phased out in 1946.
More fatefully, private trade was suppressed. Collective farming led to massive relocation of herdsmen and slaughter of livestock. Buddhist church property was confiscated. Popular revolts sprang up and were put down. The MPR enforced isolationism. By 1937 Stalinist purges had eliminated most of the nobility and Buddhist clergy; perhaps as many as 30,000 Mongolians died.
Reflecting none of this turmoil, the 1932 stamp series advertised the peace-nourishing accomplishments of Mongolian industry and culture, as if to reassure the rest of the world that everything was fine. This Soviet-style propaganda must have worked well; the 1932 stamps circulated widely among collectors while the world paid little attention to Mongolian misery.
As a result, most Big Blue feeder albums on the market today have several examples of the 1932 series, but less frequently have the 1924 issues.
A deeply troubling and yet fascinating specialization, Mongolia’s stamps have been studied in detail; see Wolfgang C. Hellrigl. The postal history of Mongolia, 1841-1941: the history of the Russian and Chinese post offices in Mongolia, and the postage stamps and postal history of independent Mongolia. London: Royal Philatelic Society, 2011.
Census: 21 in BB spaces, six on the supplement page.
Jim's Observations

(About the same time-1921- the Republic of Tannu Tuva in northwestern Mongolia came into existence. The territory was likewise very closely aligned with the Soviet Union.) 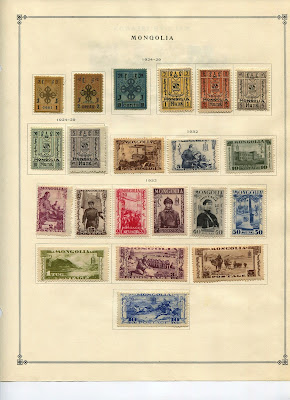 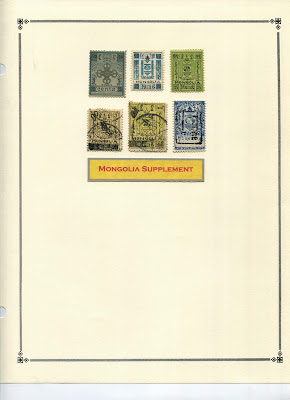