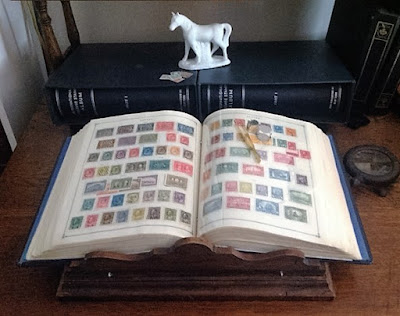 Why? I recently bought a large Swedish collection on Scott specialized pages. So, I refurbished my BB spaces and added stamps to the supplement pages. New scans, seen below, show the results. Having done this, I’m motivated to write about Sweden now rather than some months from now.

I’m often asked what I collect after having filled all BB spaces. Short answer: I collect what BB omits. And that’s a lot of stamps.

BB provides folks like us with a representative collection and, when we’ve filled all album spaces, we do have something that’s pleasantly representative, but it’s complete only in the sense that all spaces are filled. 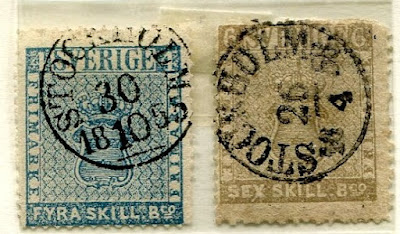 Scott #2 blue and #3a gray brown, not in BB
A question arises, therefore, about what defines “complete”. Does it mean merely that the spaces are filled? Or that all Scott Catalog major numbers are represented? My recent additions do move me closer to having all Scott major numbers for Sweden. I need about 30 more and they’re very expensive. Still, even if I were somehow to get these, the collection would fall short of being complete. 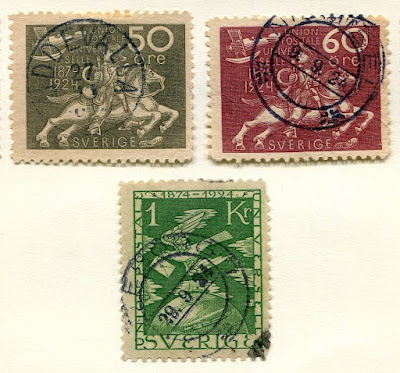 What about Scott’s minor numbers? Stanley Gibbons catalogs commonly list more major and minor numbers than Scott does. What about them? And what about local stamps, interesting cancellations, postal stationery, covers, anomalies, and the like? How can any collection ever be described as complete? All are merely representative. Completeness is an obsession fueled nightmare.

Collecting all or most of a country’s major stamp varieties, nevertheless, does represent a noteworthy milestone. Completeness, even when approximate, tells a better story than blank spaces can. When some form of completion happens in my collection, I put a new header on my supplement pages, as seen atop Bud’s Big Blue Danish West Indies. And I gussy up the pages with some additional information, the beginnings of which can be seen in the Sweden supplements at the end of this post. 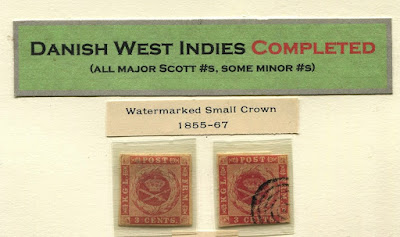 Nearing completion, however defined, presents some problems and opportunities beyond the obvious question of what to do with stamps that lack spaces. Take Sweden’s three numeral series (1877 thru 1889) for example. BB provides twelve spaces for these, but each series has either ten or eleven stamps. Moreover, BB’s spaces call for examples from all three series.

I like to follow BB’s specs as nearly as I can, but I also want all stamps from a particular series placed together. My solution, admittedly less than ideal, puts the 1877-79 series in the album spaces, and the other two in the supplement pages. That arrangement will change if I get Sweden #18 or #37, two of the 30 that have eluded me.

Scott #s 30 dark green, 31 lilac, and 32 blue,
second series (1877-79), perf 13
Used Swedish numerals often have clear date and place cancellations, a compelling reason for collecting them. The three series are easily distinguished: the first is perf 14, the second is perf 13, while the third has a printed post horn on the back. 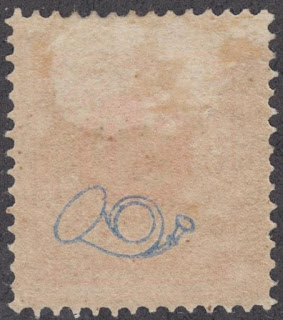 My new Swedish acquisition also provided occasion for rethinking postage dues. In the 19th century, these stamps were affixed not only to internal mail that had insufficient postage, but also to incoming international letters. Recipients had to pay to receive mail arriving from beyond Sweden’s borders regardless of how much was paid by senders in their home countries. Other nations followed this practice, too. If you’re inclined to specialize in postage due stamps, Sweden is a great place to start. The elaborately illustrated catalog of the Kersti and Bertil Larsson collection of Swedish postal history has a large section about 19th century due postage. It can be accessed online at: http://59b4eb31fe0806b35bcb5ee7cdf65d4eef4f9a4b-customer-media.s3.amazonaws.com/auctions/364/kataloge/Sweden.pdf.

Sweden issued two sets of postage due stamps, 1874 and 1877. They differ in the number of perfs (first 14, then 13) and sight color shadings. (Sometime in the mid-1870s, Sweden’s 14-perf perforating machine must have broken down, and the replacement punched holes at a rate of 13 per inch.) After both series were used up, stamp-fee tickets were attached to underpaid correspondence. Below the amount of shortage, the ticket reads “NOTE.! Upon delivery, the consignment will be stamped for the redemption amount and the stamps will be canceled.” 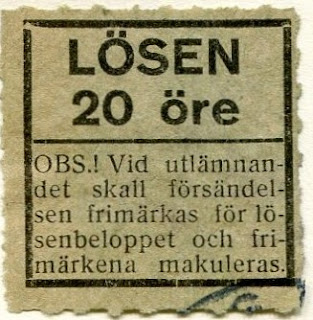 The 1874 series is the scarcer; most dues in my collection are of the 13-perf 1877 sort. BB permits examples drawn from both series.

Adding to my batch of the 1924 Universal Postage Convention commemoratives has been the best part of having a new influx of Swedish stamps. The fiftieth anniversary of the UPU was being celebrated in Stockholm when these were issued. 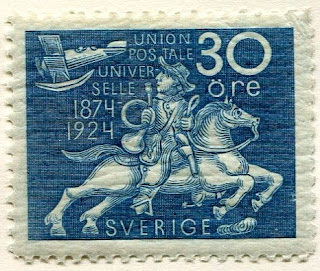 I particularly like the mail rider who, clutching his post horn, looks forlornly over his shoulder at a ski equipped airplane – the minatory replacement for his mighty steed. 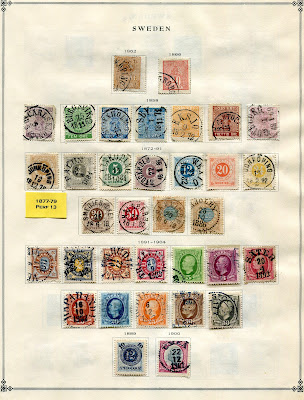 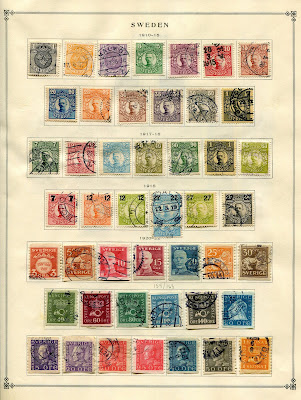 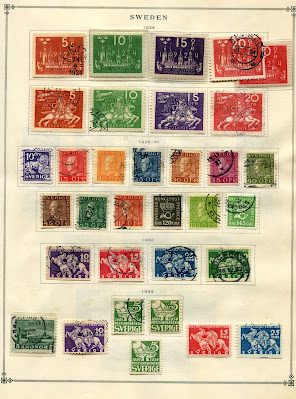 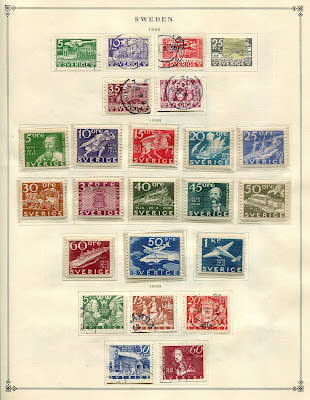 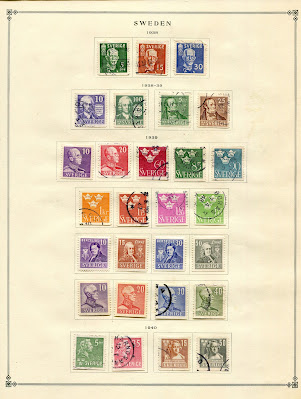 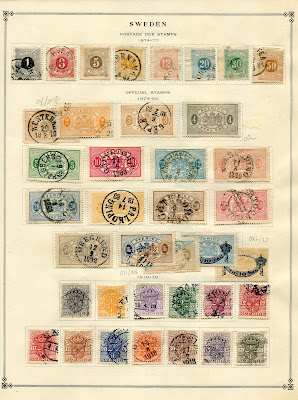 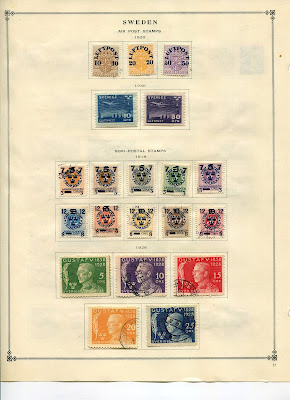 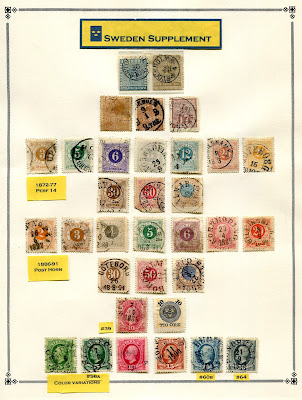 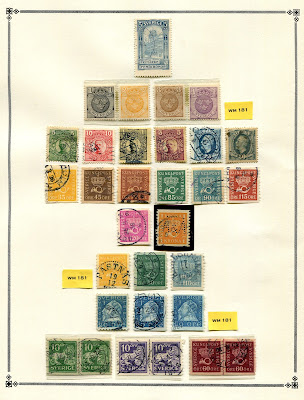 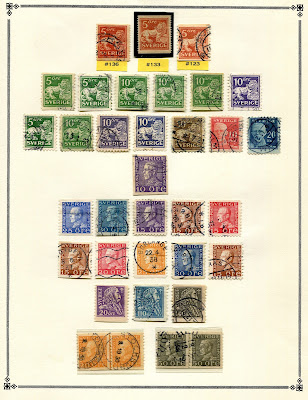 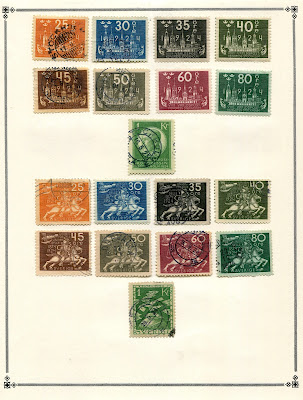 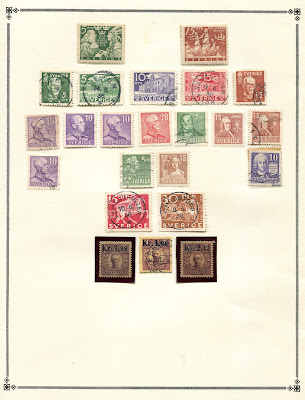 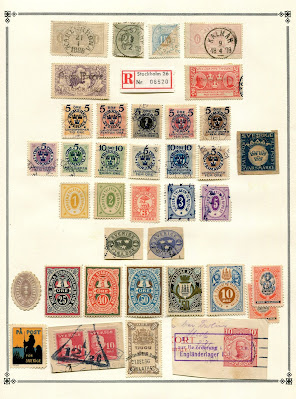 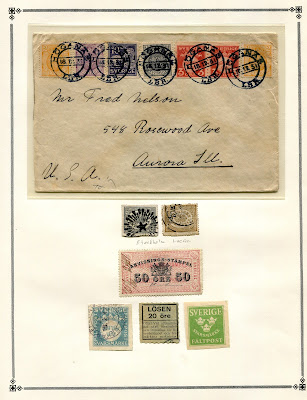