Basutoland - a closer look at the stamps 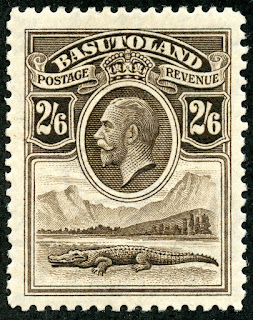 1933 Scott 8 2sh6p dark brown
"George V, Nile Crocodile and Mountains"
Into the Deep Blue
Basutoland only began issuing their own stamps in 1933, although the enclave had been part of Cape Colony since 1871 (with Cape stamps used from 1876), and part of the British Crown since 1883. 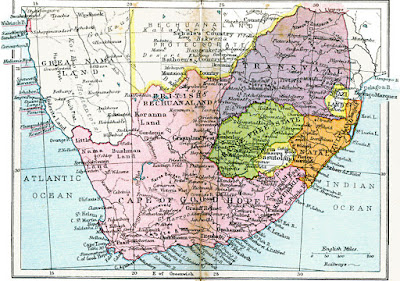 In 1966 the enclave became independent as the Kingdom of Lesotho.

The original Basutoland blog post and BB checklist, including a bit more on the history is here.

Also a good review of Basutoland can be had at Stamp World History.

A representative collection can be accumulated for not much outlay by the WW collector.

The reason? Only 300 of each value were supplied in January, 1934 for use by the Secretariat in Maseru, and they were never sold to the public. Limited usage ( between 24-54 stamps) is known between February 28, 1934 - June 8, 1934. The issue was then withdrawn, and remainders destroyed. Naturally, counterfeits exist. 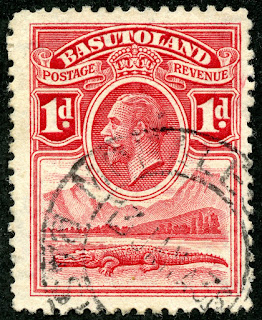 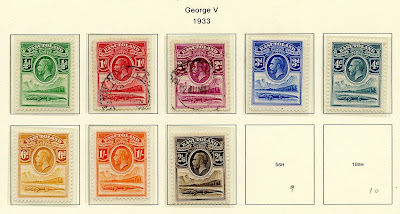 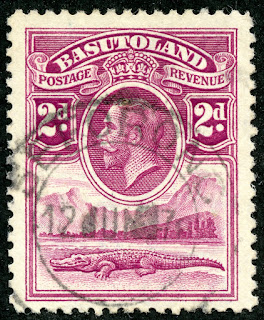 1933 Scott 3 2p red violet
"George V, Nile Crocodile and Mountains"
"Seforong" postmark?
Bur why, one may ask, is there a crocodile in the scene?

Bud, of Bud's Big Blue fame, gives the answer in his Basutoland post....

"If no crocodiles live in Basutoland, why is one on their stamps?


The country is indeed mountainous with steep cliffs rising to high tablelands, rather like an upside down cereal bowl. Mountains made the country defensible militarily; when under attack, the Basotho scaled the cliffs and dumped rocks on their adversaries. Highly effective.

They were never completely conquered, although they lost much of the land surrounding the mountains during the 19th and early 20thcenturies. Lesotho is the only country in the world, save Vatican City and San Marino, that is completely surrounded by a single foreign country.

So the mountains make historical sense, but what about the croc?

The 19th century unifying king of the Basotho people, Moshoeshoe (say, moe-SCHWAY-schway), was the son of a sub-chief of the Koena (crocodile) people who came from the North where crocs abound.

The stamps’ croc, then, is totemic -- not scenic but a British way of acknowledging Basotho royalty." 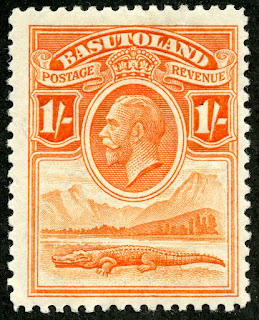 1933 Scott 7 1sh red orange
So the "Nile Crocodile" image on the stamp is totemic, rather than actual. !!

I suspect very few stamp collectors, and only those with a keen awareness of geography and southern African tribal history, would know this. 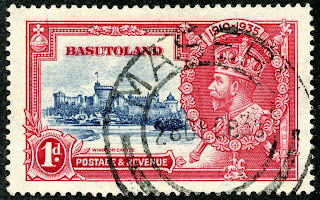 I rarely show these stamps for my British colonies posts, because common design types, forty-four countries in this case, are really not very interesting for a specific country. Eighteen additional countries celebrated the Jubilee, but with a different design.

But since there are not very many stamps issued for Basutoland in the classical era, I'm making an exception here. ;-) 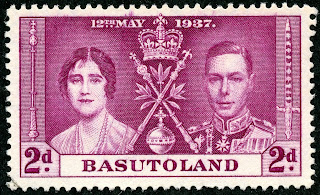 Sometimes the color for a specific denomination is different, depending on the country.

The "Coronation Issue" with this design is found for forty-five countries. There are fifteen additional countries with a different design, but celebrating the same event. 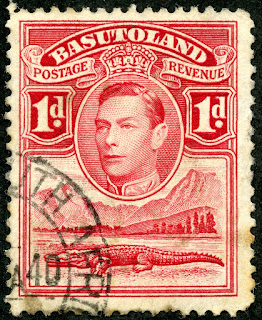 1938 Scott 19 1p rose carmine
"George VI, Nile Crocodile and Mountains"
Not one to throw away a good design, the George VI issue, consisting of eleven stamps, had the same totemic crocodile  images for the April 1, 1938 issue. 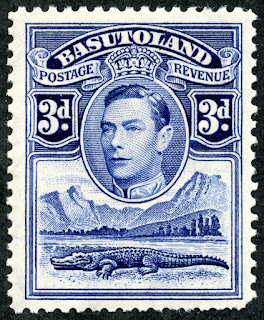 1938 Scott 22 3p ultramarine
"George VI, Nile Crocodile and Mountains"
The engraved eleven stamp issue has a CV of <$1 to $10 for ten stamps.

Note the underlying stamps are inscribed alternately in English and Afrikaans. 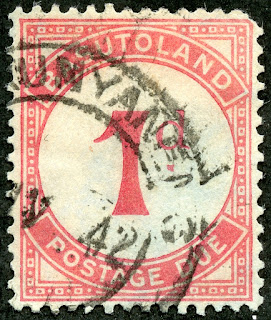 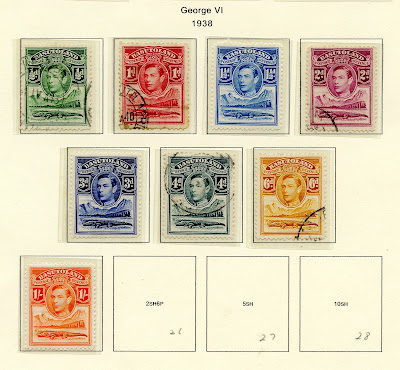 1938 George VI and Nile Crocodile Issue in Deep Blue
Deep Blue (Steiner), for Basutoland 1933-1952, has five pages. All the major numbers in the Scott catalogue have a space. 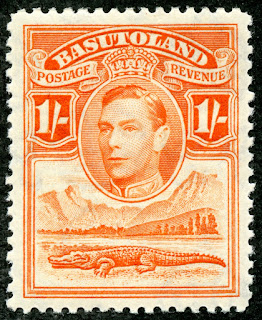 Note: Thanks to Bud for his description and explanation of the "Nile Crocodile and Mountains" design.