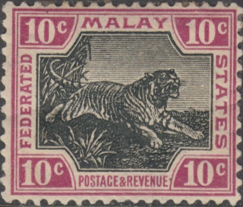 Malaya’s stamps are mainly about cats and hats.

Many kinds of cats, very big cats, live in Malaya (now Malaysia) -- tigers, leopards, black panthers, Malayan Siamese cats and several rarer species. Of these, only the tiger appears on stamps. It’s a national symbol, and endangered -- fewer than 3900 of them left in all of Asia.


Not being endangered, hats are more prolific on stamps and in Malaya’s marketplaces.
For classical era Malaya, British stamp designers favored the likenesses of elaborately behatted sultans. By comparison, British royalty usually appear unhatted on colonial stamps with their crowns floating in the empyrean (India’s stamps being an exception). Malayan chiefs rarely show up without hats or, more properly, headdresses, since some of them are intricately folded cloths called tengkoloks and some are Islamic-inspired songkok caps. Tengkoloks commonly represent coffee leaves or flower fragments wrapped in such a way as to hide sultans’ secrets. 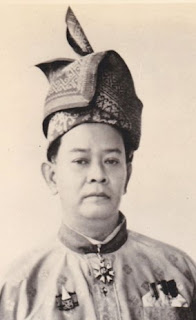 Sultan Ismail wins the prize for the most preposterous hat on a stamp (Kelantan #38). “The hat makes the man.” 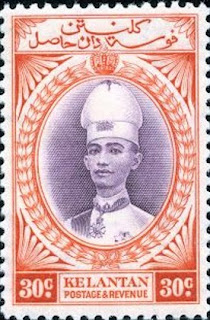 Sultans’ headdresses, arrayed in the album pages scanned below, come in many varieties. I’ll trace out those worn by only one sultan -- Ibrahim Iskandar Al-Masyhur ibni Abu Bakar -- aka, in stamp catalogs, as Sultan Ibrahim of Johore. Born in 1873, he died in 1959 in London where he preferred to live. He ruled Johor for 64 years and, in the process, developed a wild playboy reputation. His philatelic debut came with the 1896-99 series issued on the occasion of his ascendancy, then, eight years later, a second series featured a somewhat plumper Sultan sans moustache. 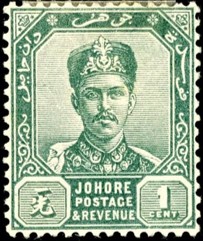 For both sittings, the Sultan wore a black velvet songkok with a silver plumed aigrette which, along with a chest full of medals, denoted his office. The songkok looks rather like an Ottoman fez, and may have been introduced by Turkish sailors in the 19th century. Or, as local lore suggests, it may trace back to the 13th century when Islam came to Malaya. 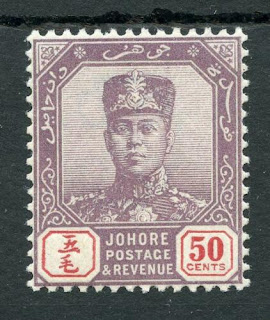 The photo showing below may have inspired the artist’s line drawing for Sc #67. 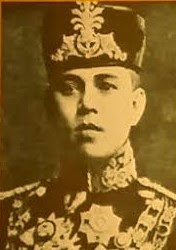 In 1935 a single Johore stamp was issued showing the Sultan, surprisingly, without headgear. He appears with his third wife, the Scottish born Helen Ibrahim, nee Wilson. The stamp and a diamond were wedding anniversary gifts for Her Highness, the Sultanah. They divorced three years later. This and another Johore stamp issued in 1940 (Sc # 127) show the only bare-headed sovereign ever to appear on Malayan postage, except, of course, for British royalty on 1940s and 50s stamps (and the cats). 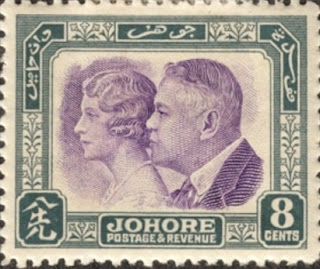 Returning to a hat but leaving his songkok aside, a bespectacled Sultan dons a military beret for the 1949-55 series. On these stamps, medals are comparatively understated 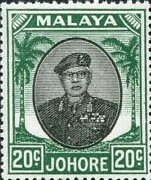 And, near the end of his long tenure, he wears a western-style bus driver’s hat and medals similar to if not identical with the ones he wore in 1896. 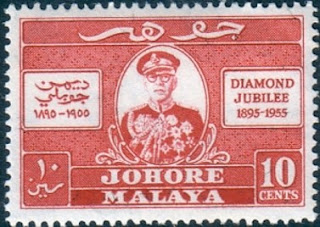 Through it all, the other Malayan sultans continued to wear traditional headgear. 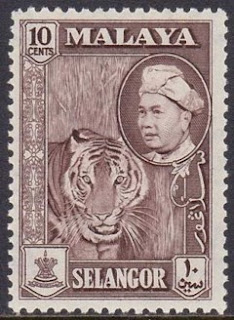 Cat and hat together, 1957
Dr. Seuss would approve

Jim's Observations
The Malay Peninsula has been under British colonial and protectorate influence since Singapore became a crown colony in 1824. The Straits Settlements colony, consisting of Singapore, Malacca, and Penang, was formed in 1826. The rest of the Peninsula consisted of the sultanate led Malay States, under the administration and protection of the British. The blog post (link below) examines the stamps issued by the Malay States from 1876-1955. 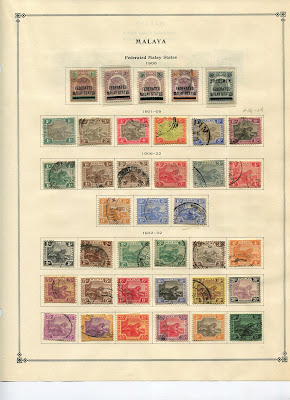 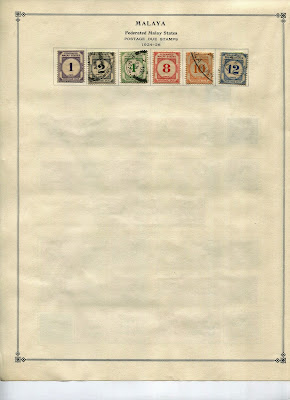 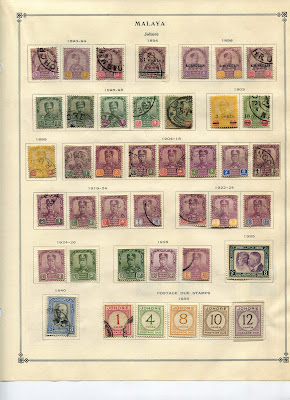 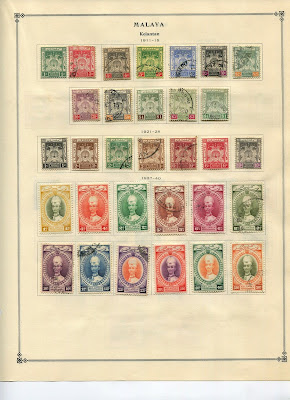 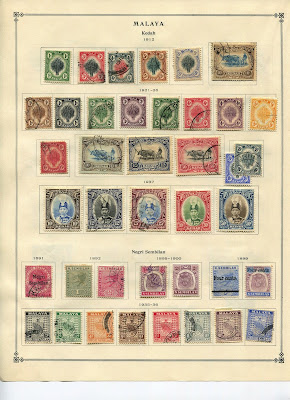 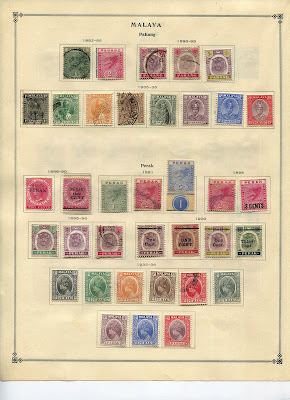 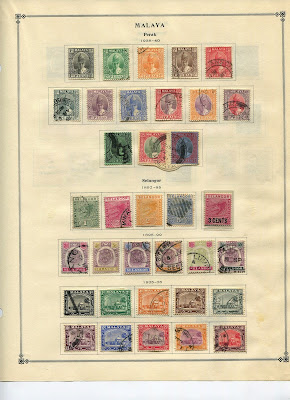 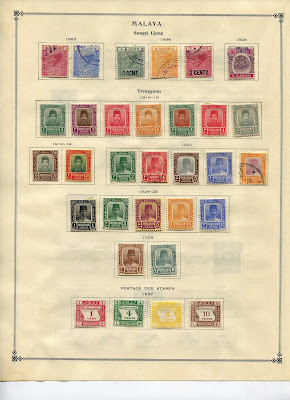 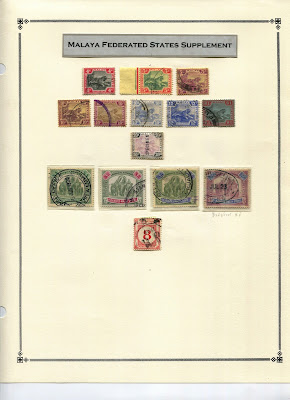 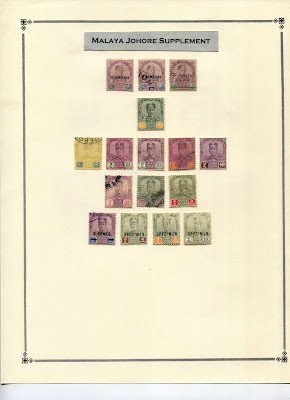 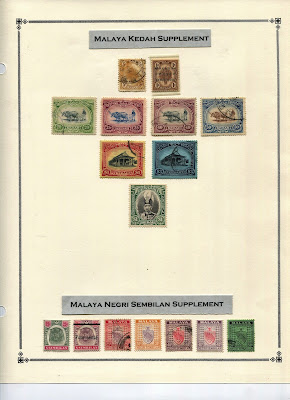 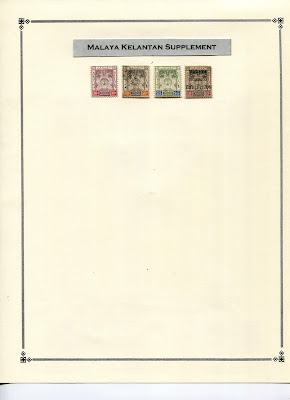 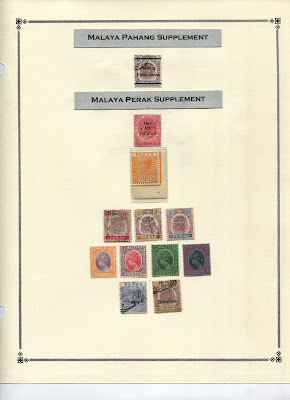 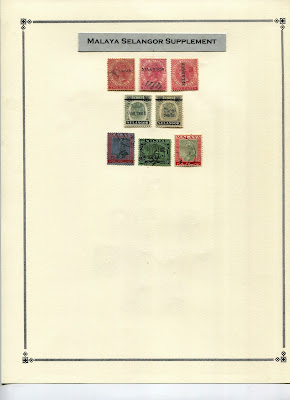 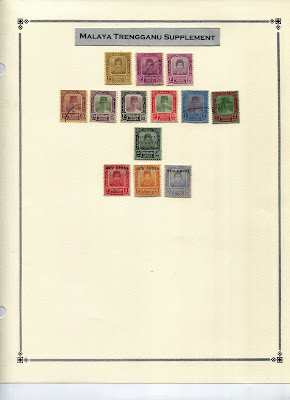