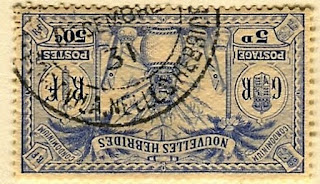 I particularly like Roland Klinger’s database (https://www.ro-klinger.de/NH/index.htm). He’s thorough and avuncular in a chatty sort of way -- and he brooks no non-sense, of which there is a sizeable amount when it comes to New Hebrides stamps. Check his web pages often as you fill Big Blue’s spaces.

For example, there is much excitement about a 1903 fantasy stamp which shows a missionary being roasted on a spit. The originals, of which three still exist, were printed on pink paper, according to Klinger. As might be expected, forgers have gone berserk faking a fantasy. A green flimflam currently being offered on eBay costs GBP39.99.

Make no mistake, a few early missionaries to the South Pacific were cannibalized. But none were commemorated philatelically, including the hapless Presbyter Cocidus named on the fantasy stamp. For images, if you must, google "roasted missionary".

The keen interest in New Hebrides stamps is no doubt largely attributable to the condominium arrangement wherein France and Great Britain shared a single colony. The French and British each had their own stamps, and also separate settlements, schools, churches, markets, and so forth. The stamps were designed by the French and printed by the British -- same images, different inscriptions in the banners (“New” and “Nouvelles”). The two colonizing powers got along well enough with each other; with the indigenous peoples, not so much.

As is the case in many South Pacific nations’ stamps, used New Hebrides stamps ordinarily command higher prices than mint stamps. All but two of mine are, alas, mint. One of the two (shown above upside down) is common, cancelled in Port Vila in December, 1931. Klinger labels this variety as PM6. 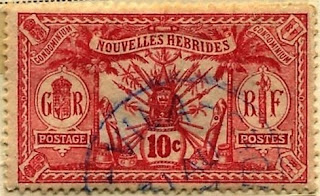 The second cancellation is more interesting. Since I could not identify it using Klinger’s categories, I sent him a scan of it and asked for his opinion. His response came the next day, and is quoted herewith:

The stamp you show here is postmarked with PM4 with two variations:

1. Color blue, which is scarce. I didn't mention it when I made the postmark pages [in the database] many years ago. But this happened in the New Hebrides. Even postmarks in red can be found. They took everything very lightly in the islands.

So, this is a rather unique variant of the postmark on this stamp. Changing the colors shows the postmark a bit better: 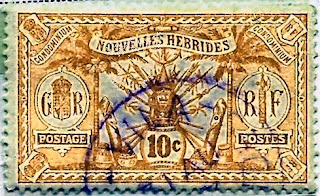 Altering colors of a scan for clarification of the postmark is a neat trick.

New Hebrides private local stamps can provide another source of rarities. But the two issued by the Australasian New Hebrides Company Ltd. (1897), shown below, are common. The scene represents ANHCo buildings in Port Vila. New Hebrides local stamps generally attest to the difficulties colonists had in getting their mail carried to nearby islands and to the outside world.

Jim's Observations
The New Hebrides islands (now the nation of Vanuatu) are located in the South Pacific 300 miles (500 kilometers) north of New Caledonia. The islands were colonized by both the British and French in the 18th century, and mirabile dictu, rather than fighting over the colonial spoils, an Anglo-French condominium was formed in 1906.
Beginning in 1911, a joint issue was produced with the Coat of Arms design of both countries placed on either side of a "Native idols" central design. More joint issues were produced in 1925, 1938, and 1953.
The Condominium continued until 1980, when Vanuatu became independent ( although, even now, the French and the English communities maintain their own traditions and language).
New Hebrides Blog Post & BB Checklist
Page 1 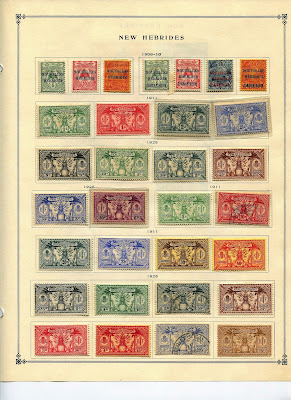 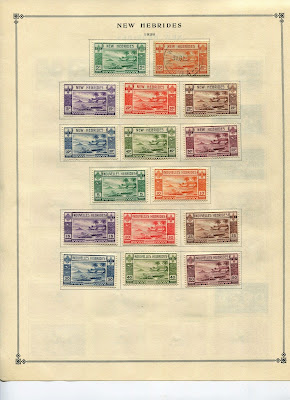 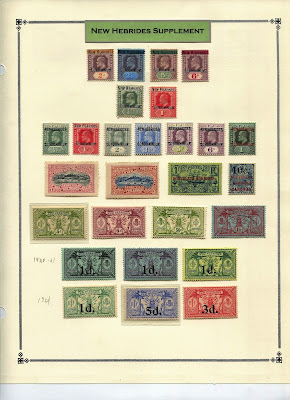 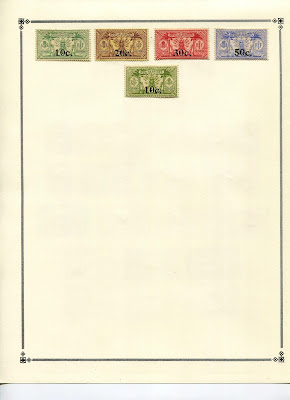