Located in the Atlantic bay of Equatorial Guinea’s Mitémélé River, these obscure Spanish colonial islands had their own stamps for only seven years (1903-10).  The likeness of King Alfonso XIII appears on all 60 stamps listed in Scott’s catalog.

Since Alfonso XIII was King from birth, Spain and the colonies record his maturation in philatelic detail -- infant, tousled child, youth, and maturity. He departed Spain in 1931 voluntarily after the Republic gained control and eventually renounced his throne.  EA&C has only the second and fourth of the above -- child and the “of full age” youth; BB has spaces only for the latter.

Census: seven in BB spaces, one tip-in. Three have been added on a new supplement page since the scans were made.

Jim's Observations
Obscure, but alive in Big Blue! Adding some additional stamps should not be a financial burden.
Now, finding them, well, that could be another story. ;-) 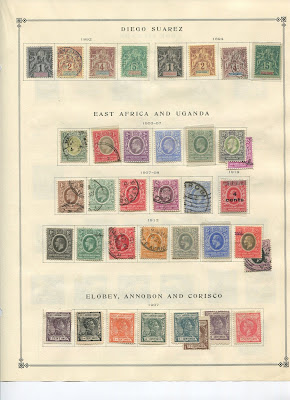