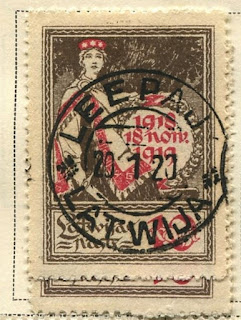 Bud’s Big Blue posts have reached the midpoint; approximately half of the album’s spaces fall before Latvia, half after.

To honor this occasion, Bud asked me to write a few words. I’m the woman pictured above (on Scott #59). Bud will make his own remarks about passing the midpoint separately. So, I get to tell some of my story here in this guest post.

I’ll begin with a few words about myself. You can call me Ally, that’s short for Allegory, because I personify Latvia’s struggles and her dreams of becoming an independent state following World War I. A guy by the name of Rihards Zarins first drew me in 1916 (see my earlier pic below). Back then, I was ready to fight any and every one single handedly -- Russians, Germans, whomever -- so Latvia could win her freedom.

We proudly proclaimed our independence on 18 November 1918, the date emblazed in the wreath I’m holding. A year later, in 1919, when I was looking somewhat more sedate, I was selected for the first anniversary stamp. Actually, I was tired then. Does it show?  It had been a rough year and hard times had continued. My sword, now resting by my side, seemed heavier than it used to. And independence was still not a sure thing. Sad. If you want a summary of what happened (it’s all very complicated), a reader of Wikipedia has sorted out the details pretty well (see https://thereaderwiki.com/en/History_of_Latvia). It makes me sick to read it, though. I think about the thousands who died. I had inspired them.

The postmaster in Leepaj made several of them to celebrate the cease fire between Latvia and Russia that happened on that day. Even more important, the Russians said they would to leave us alone. But, even so, full freedom didn’t come until ten months later. I’m told necklaces like mine pop up on eBay now and then. Watch for them.

Bud asked me to say something about the other stamps in his album. Well, Big Blue’s actual dead center falls between the fourth and fifth stamps, row 5, on page 2 of the Latvia scans. It’s between stamps with star-studded sunrises, our coat of arms back then. My hat has three stars, too, which makes my face the rising sun, kind of.
You might also find interesting the stamps printed on the back of old maps and bank notes found on Bud’s supplement pages. Paper, like almost everything else, was scarce back then. Don’t tell Bud, but I think some of the airmail stamps on his supplement pages are fakes.

After getting my cancel a hundred years ago, I was passed around from collector to collector and spent 30 years in an album that wasn’t much looked at. Then came seven years in a damp, moldy basement. I had to take a mild Clorox bath before Bud let me in his album. You can still detect a slight rust tinge along my top perforations.

Census: 150 in BB spaces, counting me; one tip-in is hiding behind me, a mint sister #59 who envies my necklace; another 100 can be seen on supplement pages. 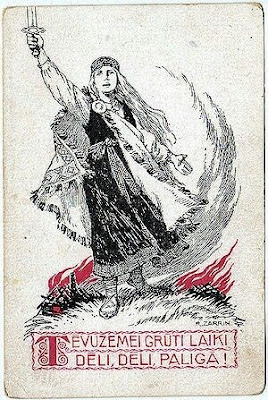 Jim's Observations
Congratulations to Bud! He is at the midway point in presenting his completely full Big Blue! You will also note that this blog post by Bud is published exactly one hundred years minus four days after the socked-on-the-nose cancellation (20-1-20)  of his "Ally" header stamp and the date of the ceasefire between Latvia and Russia.

Bud - your clever musings for each country found in BB are a real treat. I'm sure I speak for everyone when I say I am looking forward to the second half! 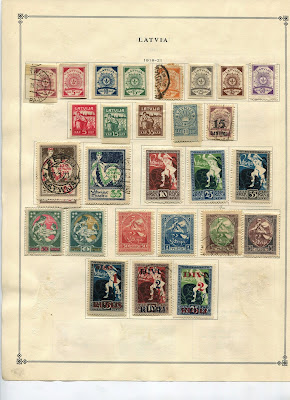 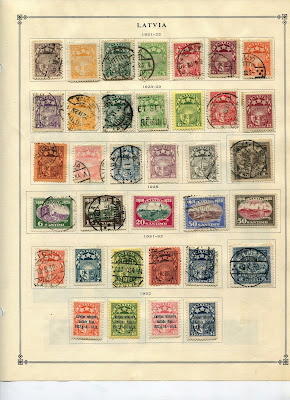 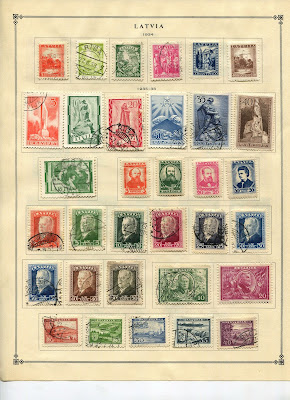 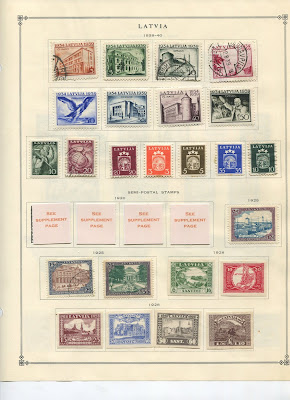 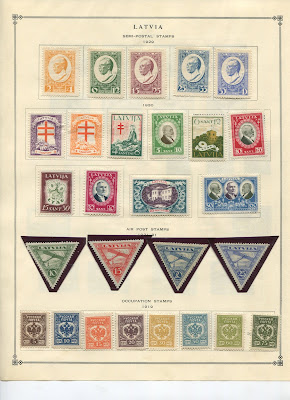 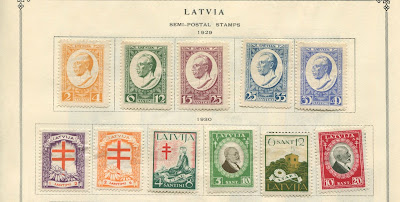 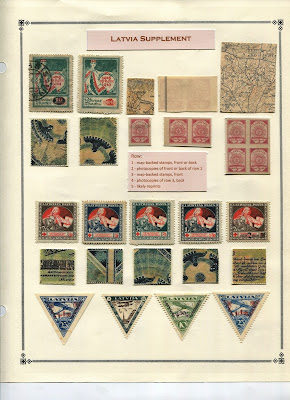 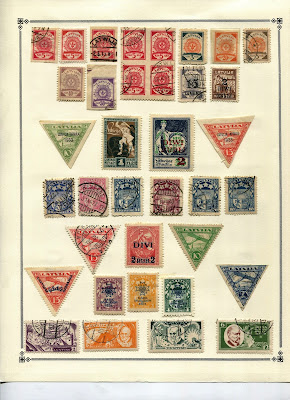 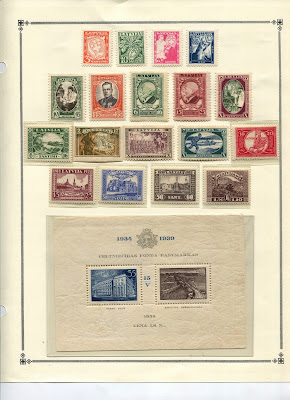 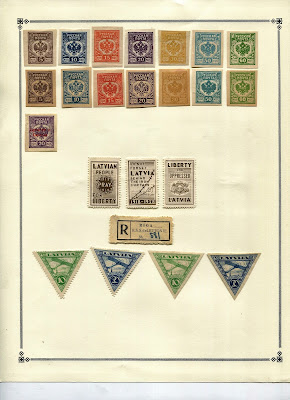