Were it not for all the boundary changes, national identity referendums, and mandated governing authorities in the wake of World War I, BB would be a much slimmer volume. Add to that all the propaganda stamps aimed at influencing plebiscite outcomes, such as those of Germany overprinted for Olsztyn/Allenstein. World-wide philately following 1919 from Samoa to Silesia, from Syria to The Saar, was transformed by the Versailles Treaty and the League of Nations.

Allenstein stamps are easy to find, with the possible exception of #18, 15pf violet brown.  Cancelled examples, such as those shown on Jim’s blog page, tend to be more collectable.

The propaganda worked. Allenstein voted overwhelmingly to join Germany rather than Poland. But it’s now part of Poland.

Census: 28 in BB spaces, no tip-ins, no supplement page

What is curious about Big Blue is the inconsistency from country to country. C'est la vie. 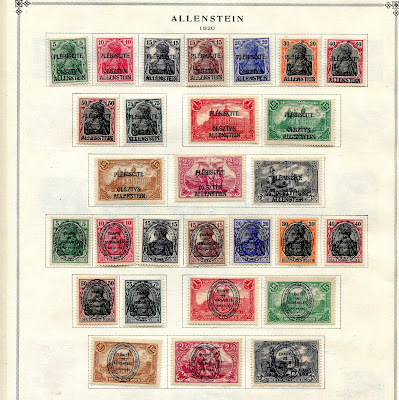