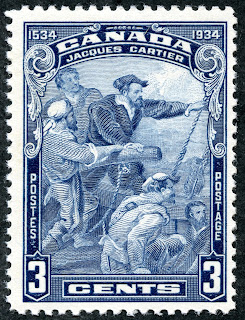 This is the third of three blog posts looking at Canada's 1852-1939 classical stamp era.

This post will look at the fine 1932-1939 pictorials issued for Canada. 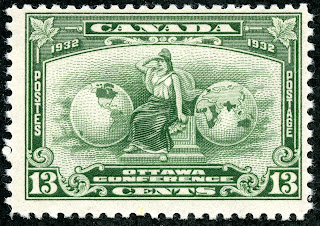 The Conference discussed the Great Depression (The failure of the Gold Standard), and lowered tariffs between British Empire nations, while allowing high tariffs for the rest of the world, much to the economic annoyance of the United States,. 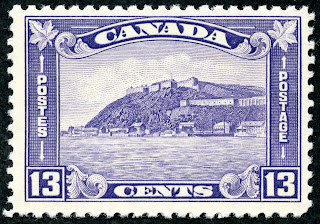 The December 1, 1932 seven stamp issue consisted of six stamps with the visage of George V, and one pictorial: the 13c dull blue "The Citadel at Quebec"

This stamp was identical, save for the color and denomination, to the 12c gray black of 1930-31, part of the nineteen stamp "Arch Issue". 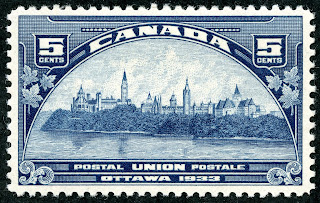 1933 Scott 202 5c dark blue
"Government Buildings, Ottawa"
For the meeting of the executive committee of the UPU in Ottawa in May and June, 1933, a lovely single stamp in large-long format was released. 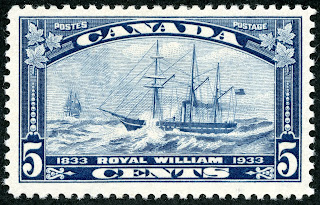 For the centenary of that feat, a really lovely 5c dark blue commemorative in larger format was issued on August 17, 1933. 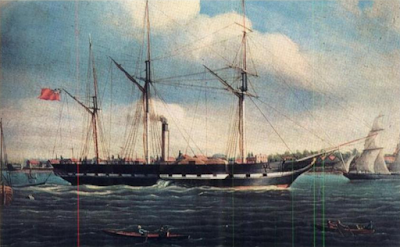 Royal William - 1834 Painting
Actually, the reason for the 25 day voyage between Nova Scotia and  Gravesend, River Thames, was that the owners wanted to sell her. She was indeed sold, and then resold to the Spanish Navy (renamed the Isabel Segunda ) and served for many years in that role. 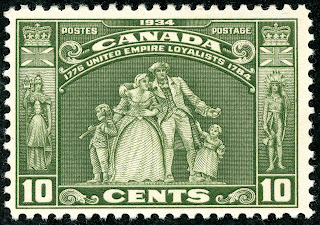 1934 Scott 209 10c olive green
"Group from Loyalists Monument, Hamilton, Ontario"
For the 150th anniversary of the emigration of the United Empire Loyalists from the U.S. to Canada, a 10c olive green was issued on July 1, 1934. 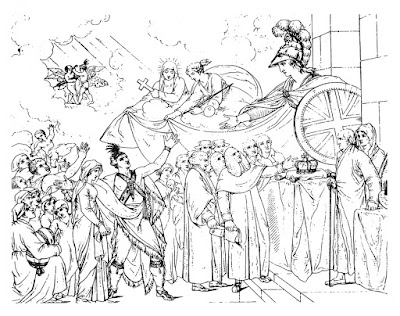 Reception of the American Loyalists by Britannia in 1783
Following their expulsion from the United States
During and after the American Revolution, the "King's Loyal Americans" naturally were not welcomed anymore, and many moved to Nova Scotia and the Province of Quebec.

Some of my relatives on my Mother's side were in this Loyalist group and left Lancaster, Pennsylvania and moved to Shelburne, Nova Scotia in 1780. 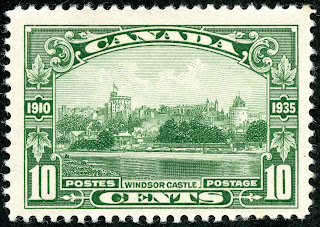 1935 Scott 215 10c green "Windsor Castle"
For the Silver Jubilee in 1935, the 25th anniversary of the accession to the throne of George V, a six stamp issue was forthcoming. The 10c green had a pictorial of Windsor Castle.

I must admit that I am a bit taken aback by the loyalty to "Britannia" by Canada during the first half of the 20th century. That just shows how really different the national psyche was between the U.S. and Canada during this time.

In fact, "Canadian" national consciousness and identity didn't really get going until the adoption of the "Maple Leaf" flag in 1965, the conversion to official bilingualism (English and French) in 1969, and the establishment of complete sovereignty as an independent country in 1982.

Sovereign Canada - How young you are! 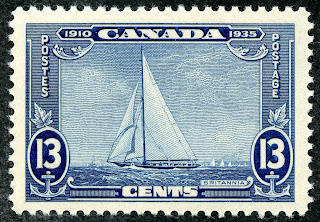 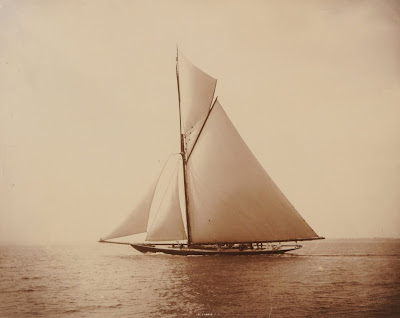 Britannia in the 1890s
Britannia was a cutter built in 1893 for Albert Edward, Prince of Wales (later King Edward VII). It also served as the racing craft for George V. 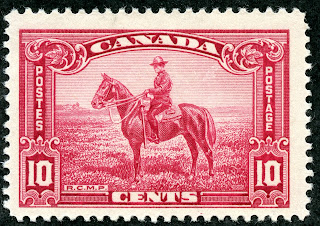 The 10c carmine rose has an iconic portrait of a Mountie on a horse. The RCMP are the national police force of Canada. Originally organized in 1873, they have existed in their present form since 1920.

What I know about the RCMP (loyal, honest, true, always gets their man/woman) was formed during childhood while watching  Sergeant Preston of the Yukon. And, in 1955, the Quaker Oats company, a sponsor of the show, gave out, in Puffed Rice cereal boxes ("Shot from Guns"), genuine deeds to one square inch of Yukon Territory. I had one. 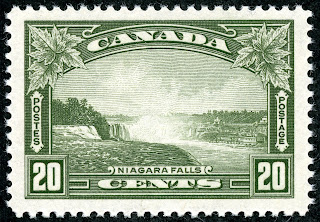 1935 Scott 225 20c olive green "Niagara Falls"
Niagara Falls shares the border between Canada and the U.S., but the view is more spectacular on the Canadian side. It has the highest flow rate of any waterfalls in North America, and has a drop of 160 feet (50 meters). 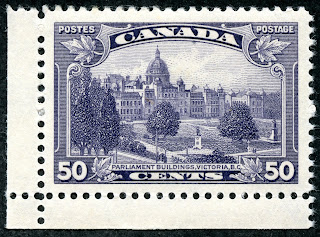 As I live in Oregon, I have visited Victoria a number of times, and the Parliament buildings (1898) with their expansive front lawn (and statue of Queen Victoria!) sloping down to the inner harbor is truly spectacular! 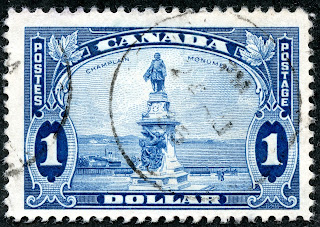 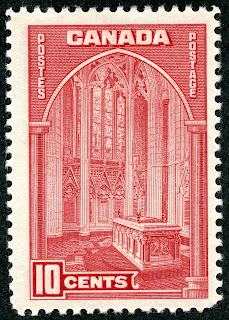 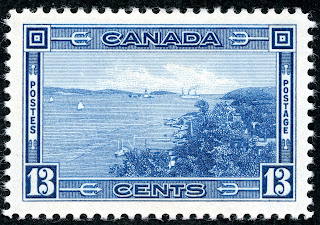 1938 Scott 242 13c deep blue
"Entrance to Halifax Harbor"
The scenes are engraved, as are all the pictorials for Canada during the classical era. 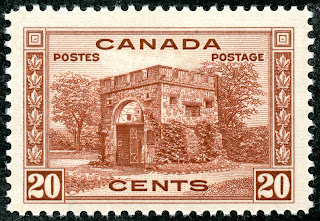 1938 Scott 243 20c red brown
"Fort Gary Gate, Winnipeg"
Only the main gate remains of Fort Gary (a Hudson Bay fur trading post), but the fort was an administrative center of of the Hudson Bay Company until 1869. 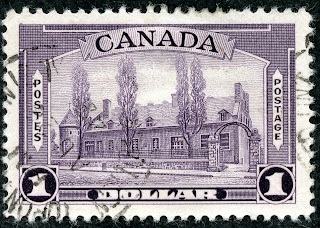 1938 Scott 245 $1 dull violet
"Chateau de Ramezay, Montreal"
Built in 1705 for the residence of the governor of Montreal, it is now a history museum. 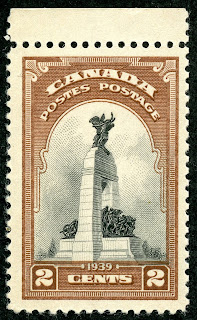 But for the Royal visit of George V & Queen Elizabeth to Canada in 1939, a three stamp bi-colored issue was released. This is the first Canadian issue to require two plates for printing. 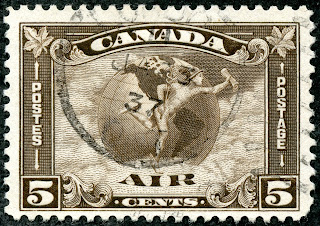 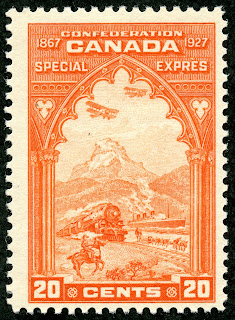 1927 Scott E3 20c orange
"Five Stages of Mail Transportation"
In 1927, as part of the Confederation Commemorative issue, a special delivery stamp was produced showing five! transportation modes. Apparently, Mail trucks were not part of this, but dogsleds were! 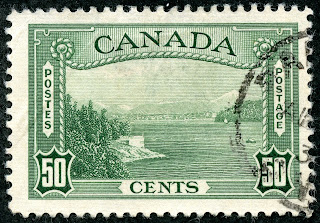 1938 Scott 244 50c green "Vancouver Harbor"
Out of the Blue
So ends our survey of Canada and their stamps. Lovely examples!

Note: Royal William painting scan, Loyalist drawing scan, and Britannia pic scan all appear to be in the public domain.