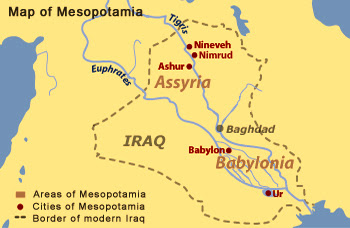 Was there ever a nation or stamp issuing authority called Mesopotamia? Well, no, there was not.

Mesopotamia was/is no more a nation than, say, the Fertile Crescent was/is a nation, or the Ancient Near East. Mesopotamia is a historic geographical region -- the area of rich land stretching between the Tigris and Euphrates rivers and bound in the northeast by the Zagros Mountains. Over the past several millennia Mesopotamia has been home for many tribes, river civilizations, city states, empires, and nations. Today, most of Iraq and some of Turkey and Syria occupy the territory historically regarded as Mesopotamia.


Why, then, does Big Blue have a section for Mesopotamia stamps? Why do none of the stamps meant for this section have “Mesopotamia” inscribed on them? The answers to these questions are deeply entrenched with the events of World War I and its aftermath, along with many other puzzlements about Big Blue’s contents.

The telling clue is in the marginal overprint: “In British Occupation.” The British Army formed the Mesopotamia Expeditionary Force, comprised of the Indian Expeditionary Force D (IEFD) and Lord Kitchener’s volunteers, known as the 13th (Western) Division. Together, they intended to end Ottoman control of “Mesopotamia”, provide greater protection for Britain’s investment in Suez, control rich oil resources and, in the process, increase popular Muslim support for Britain in India and Iraq.

The recycled Ottoman stamps reinforce these objectives. They show traditional Turkish scenes and symbols but now, clearly, under British and Indian control and authorization.

After the war ended, matters became increasingly complicated. The British were to receive a mandate from the League of Nations to govern Mesopotamia, but it never got beyond the planning stage. Two questionable plebiscites were organized, but they also failed to clarify matters. Some British leaders hoped to make the fertile plains of Mesopotamia a colony of India, a reward for Punjab warriors, but that also did not come about. An Iraqi revolt ensued in 1920 after which the Anglo-Iraq Treaty (October 1922) specified that Iraq would eventually become an independent Kingdom. After yet further disputes, Iraqi independence came in 1931-2.

So, the overprinted Turkish stamps remained in use until the first definitive stamps of Iraq were issued in 1923. Scott catalogs and albums place these overprints in a category labeled “Mesopotamia”, consistent with contemporary British and League of Nations nomenclature. Stanley Gibbons catalogs, however, list them under Iraq, consistent with what the region became. Given the entanglements of post-war Mesopotamia/Iraq, and, given the fact that Iraq did not exist as a proper state until after the stamps were decommissioned, I think Scott made the better choice.

Jim's Observations
The Mesopotamia blog (link below) focuses on the British occupation issues of 1917- 1922, as well as the Mosul issue of 1919. All of the stamps consist of surcharged/overprinted stamps of Turkey. One will find these stamps under "Mesopotamia" in the Scott Classic catalogue. The Stanley Gibbons catalogue files all entries under "Iraq".
For the issues of Iraq proper, from 1923-1938, see the Iraq blog. 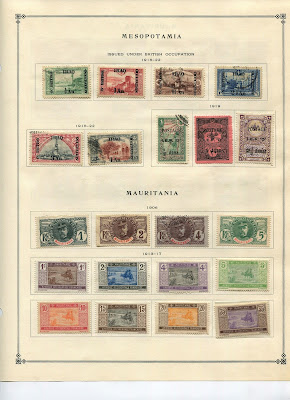 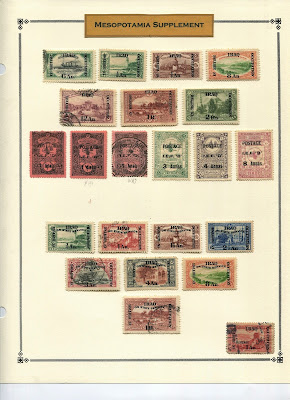