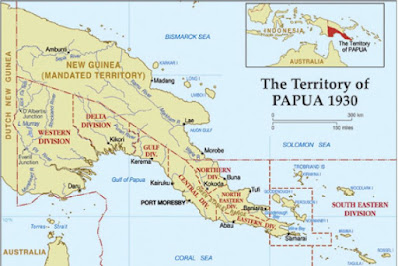 A 1930 map of eastern New Guinea Island (*)
Bud's Big Blue
Bud's Observations
Big Blue has a full roost of Guineas. Jim sorts out this confusion, “confusion” being the proper word for a brood of guinea fowl, in his post on Guinea (Portuguese Guinea) (click here).

This particular Guinea, being the former German New Guinea, is known as the Territory of New Guinea. It’s a section of New Guinea Island, but not the whole island -- only about a fourth of it.  When Germany lost World War I, the League of Nations divided its colonies among the victors. As of December 17, 1920, Australia got to administer what became the “new” New Guinea. Although in many ways linked to and reliant on Papua, its neighbor to the south, New Guinea continued as a distinct territory until 1975. Then it formally joined Papua to become Papua New Guinea, an independent nation in the British Commonwealth. 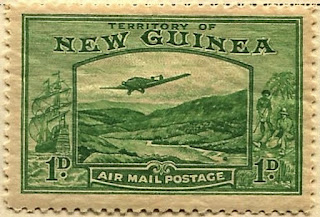 Junkers monoplane over the Bulolo Valley Goldfield, #c47, one pence, green
New Guinea, the island, is mostly steep mountains, some with snowy tops. It’s home to thousands of tribes and maybe more than 800 different languages. Few roads, no railways. European colonization never achieved more than a thin veneer of control along the coastline. The coastal and sparse interior settlements were, and still are, connected mainly by boats and airplanes. New Guinea, not surprisingly, produced a greater variety of stamps for airmail than for surface mail. 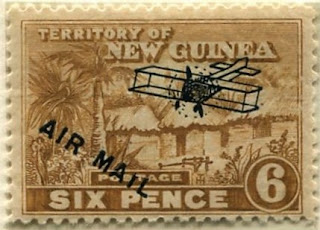 New Guinea issued stamps from 1924 through 1937. Japanese occupation during World War II ended this sequence. Following the war, Australian stamps were used until 1952 when the first Papua New Guinea issues were released (well before formal unification).

There are only four New Guinea stamp designs, some with overprints and minor variations: native huts, bird of paradise, and an airplane flying over a river valley, plus the George VI coronation common design. In some ways interesting cancellations make up for the lack of variety. 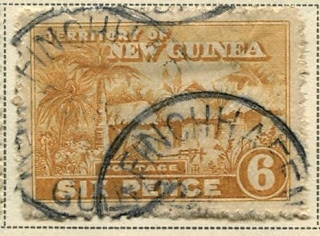 For example, the “Finchhafen” cancel (above) has a spelling error. It should be Finschhafen, but the Australians running the postal service dropped the “s”. Germans would not have made the mistake. Cancellations are the main topic of book titled The Postal History of the Territory of New Guinea from 1888 to 1942 by John Powell and updated by Andrew Loughran. Page images are accessible online, but cannot be downloaded. 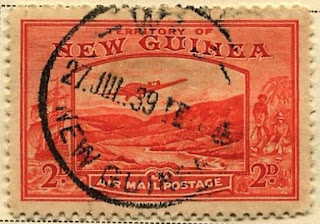 Wau is situated on the western slopes the Bulolo River Valley and was the gateway to the goldfields. The mining warden lived there as well as geologists and surveyors. Before air transport was introduced, 1927, native carriers took weeks to cross mountains and rivers to reach the settlement, a distance of 70 miles from the coast. The Wau post office opened in 1930. 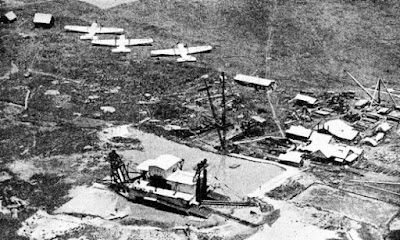 Notice the fleet of Junkers monoplanes (above, upper left) that shuttled gold, machinery, personnel and mail between the Bulolo site and the coast. Gold dredging was rather more invasive (less romantic, less green) than New Guinea’s airmail stamps portray.

Collectors interested in New Guinea cancellations can find resources online -- well documented descriptions of gold mining, often rather self-congratulatory, and histories of the postal service that connected the mines to the rest of the world. Used New Guinea stamps commonly command higher prices than mint; the same is true in many South Pacific countries.

How did an island in the East Pacific get named after a part of Africa?

Yñigo Ortiz de Retez, a Spanish explorer, landed on the large island north of Australia in 1545 and, because he thought its people resembled those he had seen along the West African seaboard, he named it New Guinea. European adventurers of the 15th century typically referred to the area near modern-day Senegal as “Guinea,” a label that persisted during 18th century colonization of West Africa -- hence Portuguese Guinea, Spanish Guinea, Gulf of Guinea, Guinea hen, and so forth.

Some linguists trace the word “guinea” to a Berber language, Tuareg, in which aginaw refers to black people (**). Others, who suggest that aginaw is a bit of a stretch, offer Djenné, an African city name, as being a more probable origin. In any case, Europeans found many uses for the term, including a British gold coin. Colonizers feverishly extracted West African gold long before the New Guinea mines opened.

I should also mention my granddaughter’s guinea pig, Cookie. She, the rodent not my granddaughter, is banned from my stamp room where a strict no-paper-gnawing-pet ordinance holds sway. Cookie is cute, though. Her forbearers came from South America, not Africa or the South Pacific islands. Perhaps early domesticators mistook guinea for Guyana. We addle-pated stamps collectors sometimes make the same mistake. It’s what wordsmiths call a malaprop or “eggcorn” (acorn). Guyana, for its part, has laid philatelic claim to its furry ex-patriots 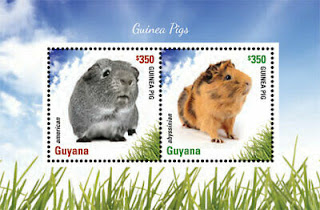 2014 Guyana souvenir sheet (obviously not in my collection)

Census: 68 in BB spaces, six on the supplement page. 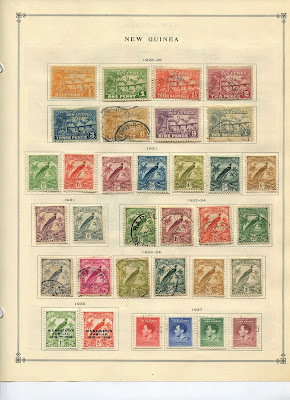 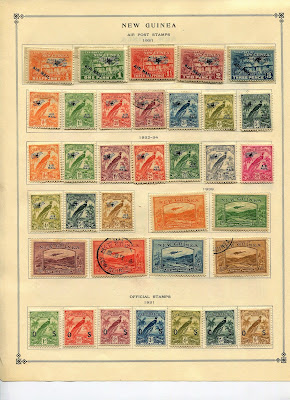 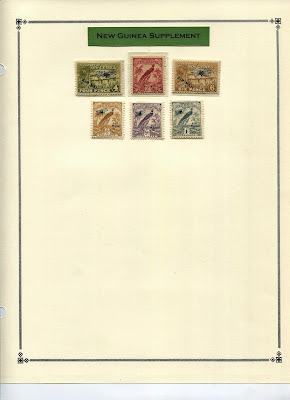