Most expensive stamps in Big Blue 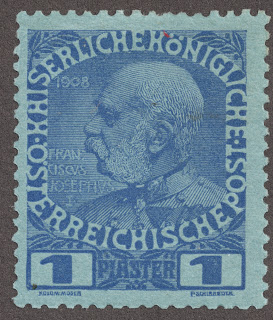 Big Blue's "Mascot" stamp: Austria Offices in Turkey
1908 1pi Deep Blue on Blue
...so far!   :-)
I'm just about through the A's in Big Blue, and it might be of some interest to rank the most expensive stamps. Obviously, the ranking will change significantly as I get further along in the countries. Most of the stamps listed now will drop out, having been replaced by more expensive brethren.

#8)  $35 Argentina 1939 Scott 472  1.50p dark brown  "record and winged letter"
Somehow issuing stamps for the mailing of phonograph records turned out not to be very popular. ;-)  So Argentina has a comparatively "rare" stamp instead.

#4)  $50 Alaouites 1929-30 Air Post Scott C21 Syrian stamp 15p on 25p (Bk & R) surcharged and overprinted, with additional overprint of plane.
Actually an attractive collectible stamp with the airplane overprint. Not too surprised, as all nine of the Alaouites Air Post stamps in Big Blue are not cheap.


My note about this in the Andorra blog:
Now the big blunder- Why did Scott include a $65, or even a better fit, a $160 stamp for an album that originally was meant for "Juniors"? Yes the Scott 19 30c olive brown IS included in the 1941 Junior album I have.

A few comments and ground rules...

A) I'm not going to include the United States, as we all know that Big Blue was more comprehensive with the "home" country, and there are a lot of costly 19th century stamps listed. Certainly, not least would be the  Scott 2, the 10c black George Washington valued at $1200. Also some (many?) collectors keep their United States collection in other albums. Perhaps I will put together a "super list" sometime where the expensive USA stamps can duke it out with the expensive worldwide stamps.

D) "Expensive' does not necessarily mean "difficult to acquire"- but sometimes it does. ;-) The Syria 106 50c overprint on 10c green is valued at a trivial 85 cents. But the Syria Scott 106c 25c overprint on 10c green, an "error" stamp, is also inexplicably listed in Big Blue. The cost now? $240! But beyond the cost, the stamp has even more of a reputation as being quite difficult to find. Bob Skinner in his "Filling Spaces" blog, discusses how he managed to obtain this rarity.

The point is "expensive" stamps may be easy to acquire if one has the cash.  Other stamps may be comparatively inexpensive, but difficult to acquire. And finally one may be faced with both!

E) Finally, the list I have put together, modest though it is with only the A's included, is not quite what  I expected. Sure there are some  classic "rarities" , but also inclusions by Big Blue that appear to be mistakes .

Note: You will need to consult a Scott catalogue for specific pricing. I only give a very "ball park" price, and never the actual catalogue value. ( The only exception are these "Most expensive" lists, which constitute a very small amount of the catalogue's listings.)